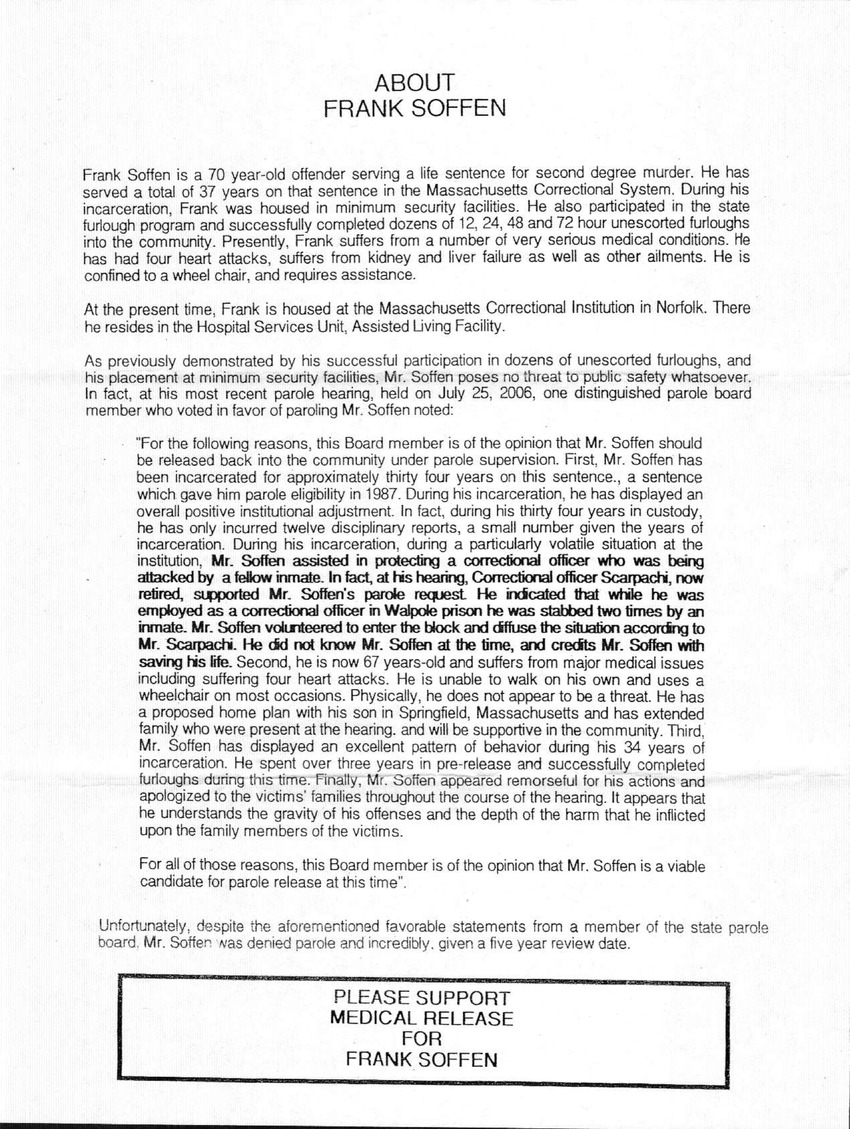 Frank Soffen is a 70-year-old offender serving a life sentence for second degree murder. He has served a total of 37 years on that sentence in the Massachusetts Correctional System. During his incarceration, Frank was housed in minimum security facilities. He also participated in the state furlough program and successfully completed dozens of 12, 24, 48, and 72 hour unescorted furloughs into the community.

Presently, Frank suffers from a number of very serious medical conditions. He has had four heart attacks, suffers from kidney and liver failure, as well as other ailments. He is confined to a wheelchair and requires assistance. At the present time, Frank is housed at the Massachusetts Correctional Institution in Norfolk. There, he resides in the hospital services unit, assisted living facility.

As previously demonstrated by his successful participation in dozens of unescorted furloughs and his placement at minimum security facilities, Mr. Soffen poses no threat to public safety whatsoever. In fact, at his most recent parole hearing, held on July 25, 2006, one distinguished parole board member who voted in favor of Mr. Soffen noted:

"For the following reasons, this Board member is of the opinion that Mr. Soffen should be released back into the community under parole supervision. First, Mr. Soffen has been incarcerated for approximately thirty four years on this sentence, a sentence which gave him parole eligibility in 1987. During his incarceration, he has displayed an overall positive institutional adjustment. In fact, during his thirty four years in custody, he has only incurred twelve disciplinary reports, a small number given the years of incarceration. During his incarceration, during a particularly volatile situation at the institution, [in bold] Mr. Soffen assisted in protecting a correctional officer who was being attacked by a fellow inmate. In fact, at his hearing, Corectional officer Scarpachi, now retired, supported Mr. Soffen's parole request. He indicated that while he was employed as a correctional officer in Walpole prison he was stabbed two times by an inmate. Mr. Soffen volunteered to enter the block and diffuse the situation according to Mr. Scarpachi. He did not know Mr. Soffen at the time, and credits Mr. Soffen with saving his life. [end of bold section] Second, he is now 67 years-old and suffers from major medical issues including suffering four heart attacks. He is unable to walk on his own and uses a wheelchair on most occasions. Physically, he does not appear to be a threat. He has a proposed home plan with his son in Springfield, Massachusetts and has extended family who were present at the hearing. and will be supportive in the community. Third, Mr. Soffen has displayed an excellent pattern of behavior during his 34 years of incarceration. He spent over three years in pre-release and successfully completed furloughs during this time. Finally, Mr. Soffen appears remorseful for his actions and apologized to the victims' families throughout the course of the hearing. It appears that he understands the gravity of his offenses and the depth of the harm that he inflicted upon the family members of the victims.

For all of those reasons, this Board member is of the opinion that Mr. Soffen is a viable candidate for parole release at this time."

Unfortunately, despite the aforementioned favorable statements from a member of the state parole board, Mr. Soffen was denied parole and incredibly, given a five year review date.

Rest in peace. Thank you to the Soffen and Perrot families for this story:
https://www.masslive.com/news/index.ssf/2016/01/notorious_killer_francis_soffe.html