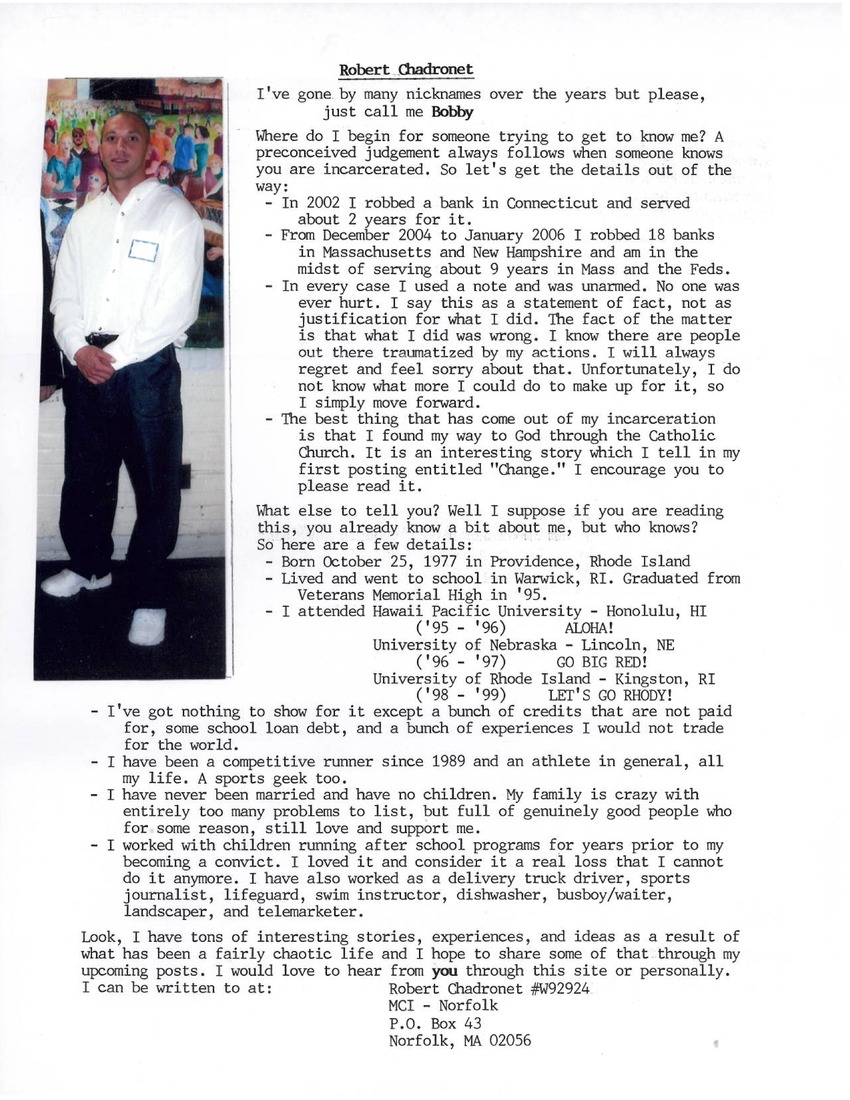 Robert Chadronet
I've gone by many nicknames over the years but please, just call me Bobby
Where do I begin for someone trying to get to know me? A preconceived judgement always follows when someone knows you are incarcerated. So let's get the details out of the way!
- In 2002 I robbed a bank in Connecticut and served about Two years for it.
- From December 2004 to January 2006 I robbed eighteen banks in Massachusetts and New Hampshire and am in the midst of serving about nine years in Mass and the Feds.
- In every case I used a note and was unarmed, No one was ever hurt. I say this as a statement of fact, not as justification for what I did. The fact of the matter is that what I did was wrong. I know there are people out there traumatized by my actions, I will always regret and feel sorry about that. Unfortunately, I do not know what more I could do to make up for it, so I simply move forward.
- The best thing that has come out of my incarceration is that I found my way to God through the Catholic Church. It is an interesting story which I tell in my first posting entitled "Change" I encourage you to please read it.

What else to tell you? Well I suppose if you are reading this, you already know a bit about me, but who knows?
So here are a few details:
- Born October 25, 1997 in Providence, Rhode Island
- Lived and went to school in Warwick, RI. Graduated from Vetrens Memorial High in '95.
- I attended Hawaii Pacific University - Honolulu, HI ('95 - '96) ALOHA!
University of of Nebraska - Lincoln, NE ('96 - '97) GO BIG RED!
University of Rhode Island - Kingston, RI ('98 - 99) LET'S GO RHODY!
- I've got nothing to show for it except a bunch of credits that are not paid for, some school loan debt, and a bunch of ecperiences I would not trade for the world.
- I have been a competitive runner since 1989 and an athlete in general, all my life. A sports geek too.
- I have never been married and have no children. My family is crazy with entirely too many problems to list, but full of genuinely good people who for some reason, still love and support me.
- I worked with children running after school programs for years prior to my becoming a convict. I loved it and consider it a real loss that I cannot do it anymore. I have also worked as a delivery truck driver, sports journalist, lifeguard, swim instructor, dishwasher, busboy/waiter, landscaper, and telemarketer.

look, I have tons of interesting stories, experiences, and ideas as a result of what has been a fairly chaotic life and I hope to share some of that through my upcoming posts. I would love to hear from you through this site or personally.
I can be written at: