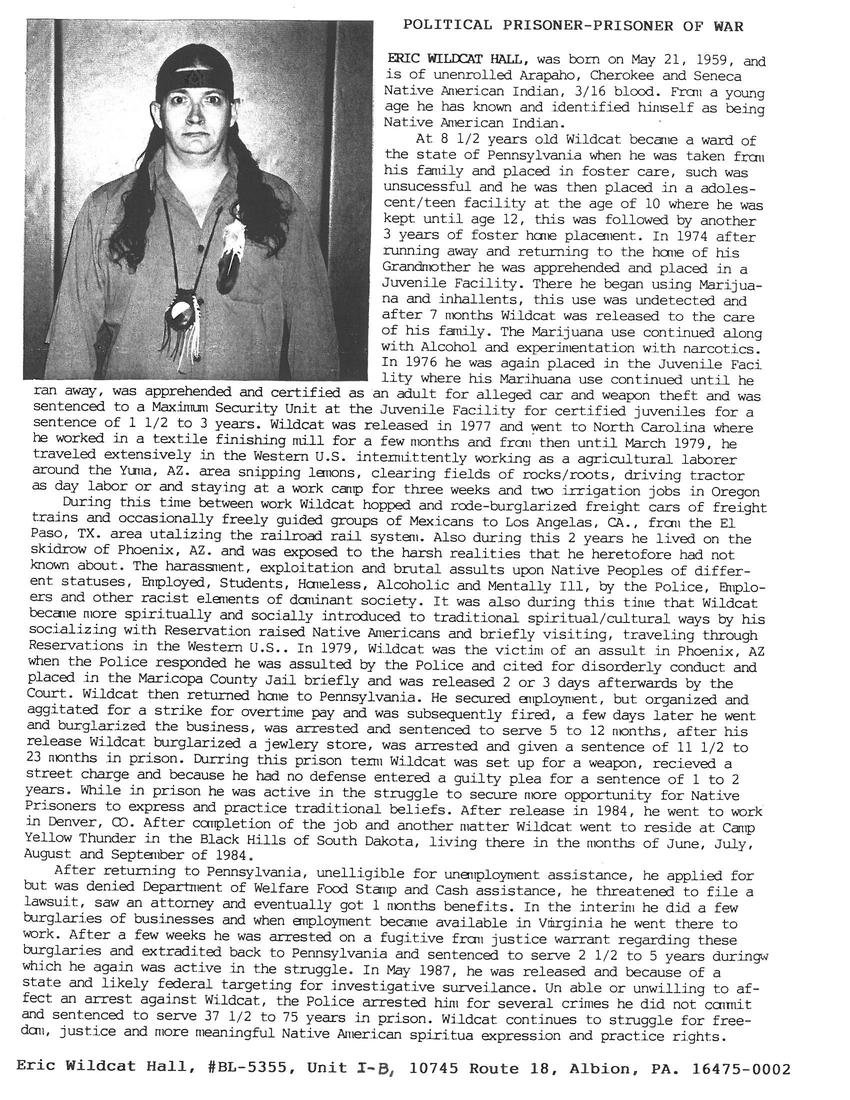 At 8 1/2 years old, Wildcat became a ward of the state of Pennsylvania when he was taken from his family and placed in foster care. Such was unsuccessful and he was then placed in an adolescent/teen facility at the age of 10 where he was kept until he was 12. This was followed by another three years of foster home placement. In 1974. after running away and returning to the home of his grandmother. He was apprehended and placed into a juvenile facility. There, he began using marijuana and inhalants. This use was undetected.

Wildcat was released in 1977 and went to North Carolina where he worked in a textile finishing mill for a few months. From then until March 1979, he traveled extensively in the Western U.S. intermittently working as an agricultural laborer around the Yuma, AZ area snipping lemons, clearing fields of rocks and roots, driving tractor as day labor, or staying at a work camp for three weeks and two irrigation jobs in Oregon.

During this time between work, Wildcat hopped and rode burglarized freight cars of freight trains and occasionally freely guided groups of Mexicans to Los Angeles, CA from the El Paso, TX area utilizing the railroad rail system. Also, during the two years he lived on the skidrow of Phoenix, AZ and was exposed to the harsh realities that he heretofore had not known about. The harassment, exploitation, and brutal assaults upon Native peoples of different statuses: employed, students, homeless, alcoholic, and mentally ill by the police, employers, and other racist elements of dominant society.

It was also around this time that Wildcat became more spiritually and socially introduced to traditional spiritual and cultural ways by his socializing with reservation raised Native Americans and briefly visiting traveling through reservations in the Western US. In 1979, Wildcat was the victim of an assault in Phoenix, AZ. When the police responded, he was assaulted by the police and cited for disorderly conduct and placed in Maricopa County Jail. He was released two or three days afterwards by the court.

Wildcat then returned home to Pennslyvania. He secured employment, but organized and agitated for a strike for overtime pay and was subsequently fired. A few days later, he went and burglarized the business. He was arrested and given a sentence of 11 1/2 to 23 months in prison. During this prison term, Wildcat was set up for a weapon, received a street charge. Because he had no defense, he entered a guilty plea for a sentence of 1 to 2 years.

While in prison, he was active in the struggle to secure more opportunity for Native prisoners to express and practice traditional beliefs. After release in 1984, he went to work in Denver, CO. After completion of the job and another matter, Wildcat went to reside at Camp Yellow Thunder in the Black Hills, South Dakota, living there in the months of June, July, August, and September of 1984.

After returning to Pennsylvania, ineligible for unemployment assistance, he applied for but was denied Department of Welfare food stamps and cash assistance. He threatened to file a lawsuit, saw an attorney, and eventually got one month's benefits. In the interim, he did a few burglaries of businesses.

When employment became available in Virginia, he went there to work. After a few weeks, he was arrested on a fugitive from justice warrant regarding these burglaries and extradited back to Pennsylvania, and sentenced to serve 2 1/2 to 5 years, during which he again was active in the struggle.

In May 1987, he was released and, because of a state and likely federal targeting him for investigative surveillance, they were unable or unwilling to effect an arrest against Wildcat. The police arrested him for several crimes he did not commit. He was sentenced to serve 37 1/2 to 75 years in prison. Wildcat continues to struggle for freedom, justice, and more meaningful Native American spiritual expression and practice rights.