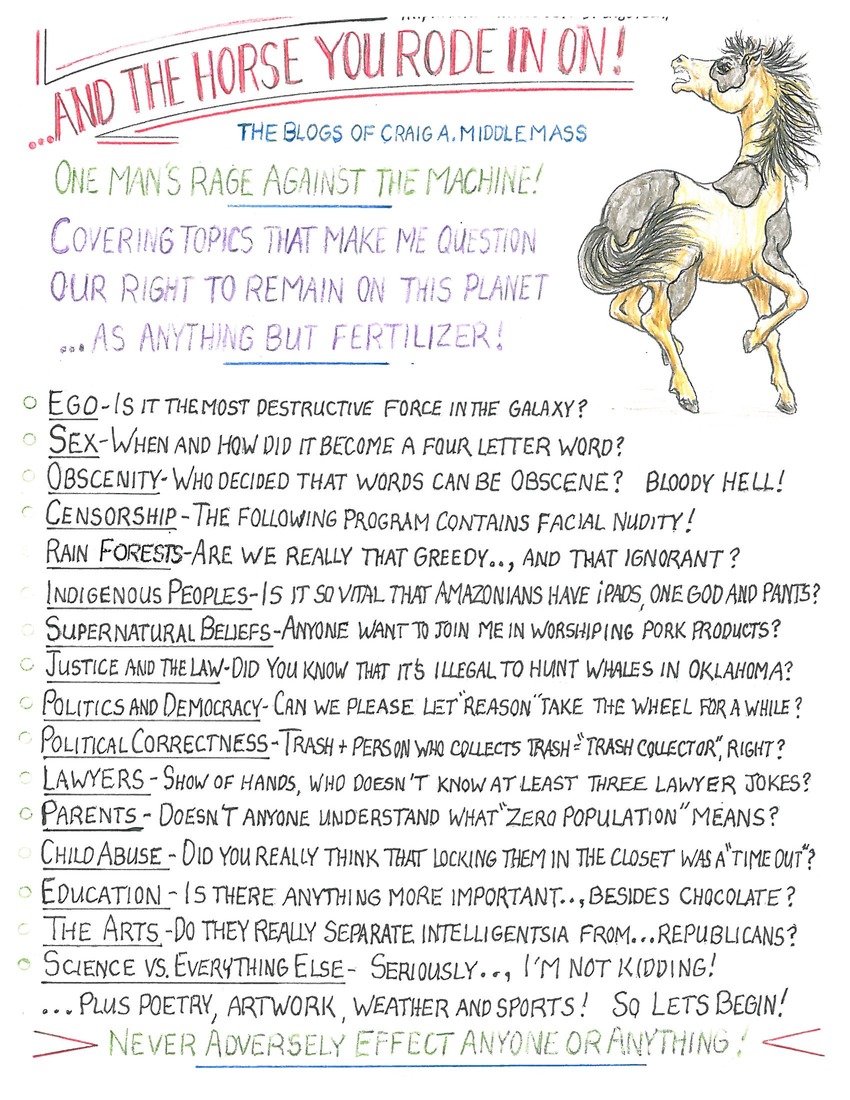 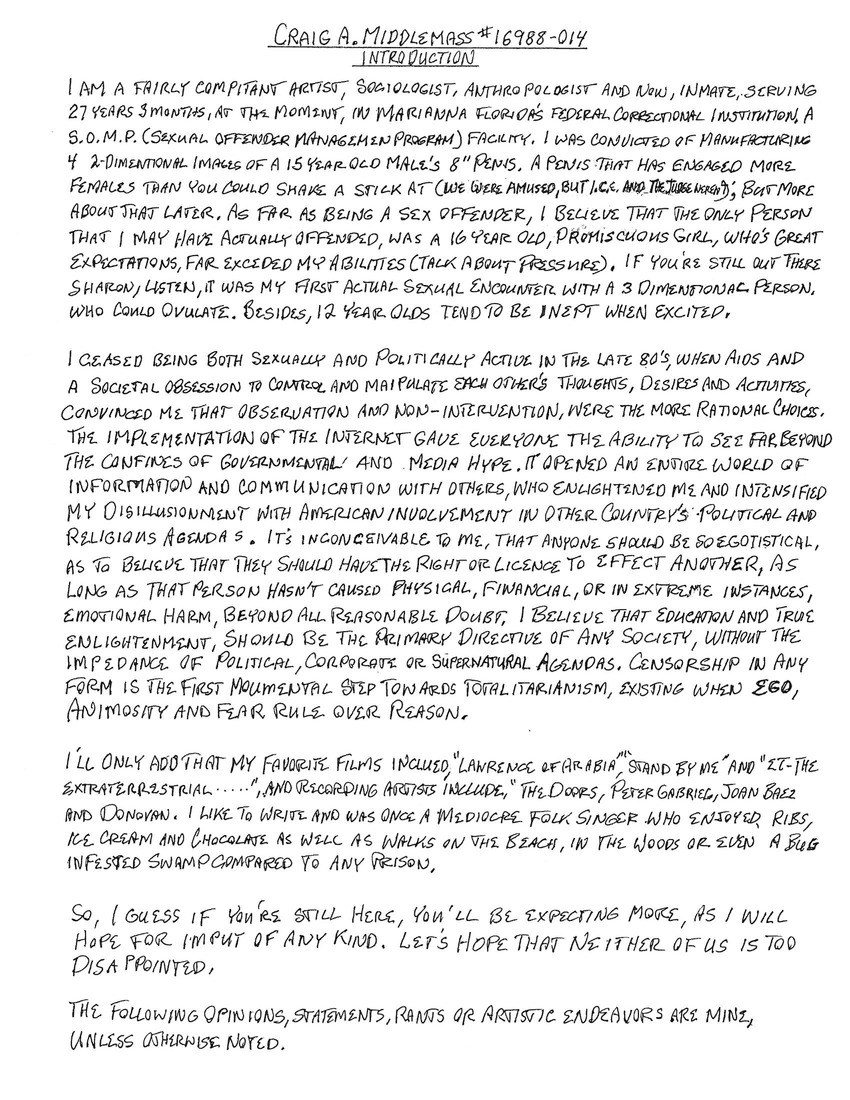 ...And The Horse Your Rode In On!
[drawing of a cow-spotted horse galloping and twisting its neck back towards the title.]
The Blogs of Craig A. Middlemass

One Man's Rage Against the Machine!
Covering Topics That Make Me Question
Our Right To Remain On This Planet
...As Anything But Fertilizer!

*Ego - Is it the most destructive force in the galaxy?
*Sex - When and how did it become a four-letter word?
*Obscenity - Who decided that words can be obscene? Bloody hell!
*Censorship - The following program contains facial nudity!
*Rain Forests - Are we really that greed... and that ignorant?
*Indigenous Peoples - Is it so vital that Amazonians have iPads, one god, and pants?
*Supernatural Beliefs - Anyone want to join me in worshiping pork products?
*Justice and The Law - Did you know that it's illegal to hunt whales in Oklahoma?
*Politics and Democracy - Can we please let "reason" take the wheel for a while?
*Political Correctness - Trash + person who collects trash = "trash collector", right?
*Lawyers - Show of hands: who doesn't know at least three lawyer jokes?
*Parents - Doesn't anyone understand what "zero population" means?
*Child Abuse - Did you really think that locking them in the closet was a "timeout?"
*Education - Is there anything more important... besides chocolate?
*The Arts - Do they really separate intellegentsia from Republicans?
*Science vs. Everything Else - Seriously, I'm not kidding!

...plus poetry, artwork, weather, and sports! So let's begin!
>Never adversely affect anyone or anything!<

I am a fairly competent artist, sociologist, anthropologist, and now inmate serving 27 years, 3 months at the moment in Marianna, Florida's Correctional Institution, a SOMP (sexual offender management program) facility. I was convicted of manufacturing 4 2D images of a 15-year-old male's 8" penis, a penis that has engaged more females than you could shake a stick at (we were amused, but ICE and the judge weren't). But more about that later.

As far as being a sex offender, I believe that the only person that I may have actually offended was a 16-year-old promiscuous girl whose great expectations far exceeded my abilities (talk about pressure). If you're still out there, Sharon, listen: it was my first actual sexual encounter with a 3D person who could ovulate. Besides, 12-year-olds tend to be inept when excited.

I ceased being both sexually and politically active in the late '80s, when AIDS and a societal obsession to control and manipulate each other's thoughts, desires, and activities convinced me that observation and non-intervention were the more rational choice. The implementation of the Internet gave everyone the ability to see far beyond the confines of governmental and media hype. It opened an entire world of information and communication with others who enlightened me and intensified religious agendas. It's inconceivable to me that anyone should be so egotistical as to believe that they should have the right or license to affect another, as long as that person hasn't caused physical, financial, or in extreme instances, emotional harm beyond all reasonable doubt. I believe that education and true enlightenment should be the primary directive of any society without the impedance of political, corporate, or supernatural agendas. Censorship in any form is the first monumental step towards totalitarianism, existing when ego, animosity, and fear rule over reason.

I'll only add that my favorite films included Lawrence of Arabia, Stand by Me, and ET-The Extraterrestrial. And recording artists include The Doors, Peter Gabriel, Joan Baez, and Donovan. I like to write and was once a mediocre folk singer who enjoyed ribs, ice cream, and chocolate as well as walks on the beach, in the woods, or even a bug-infested swamp compared to any prison.

So I guess if you're still here, you'll be expecting more. I will hope for input of any kind. Let's hope that neither of us are too disappointed.

The following opinions, statements, rants, or artistic endeavors are mine, unless otherwise noted.