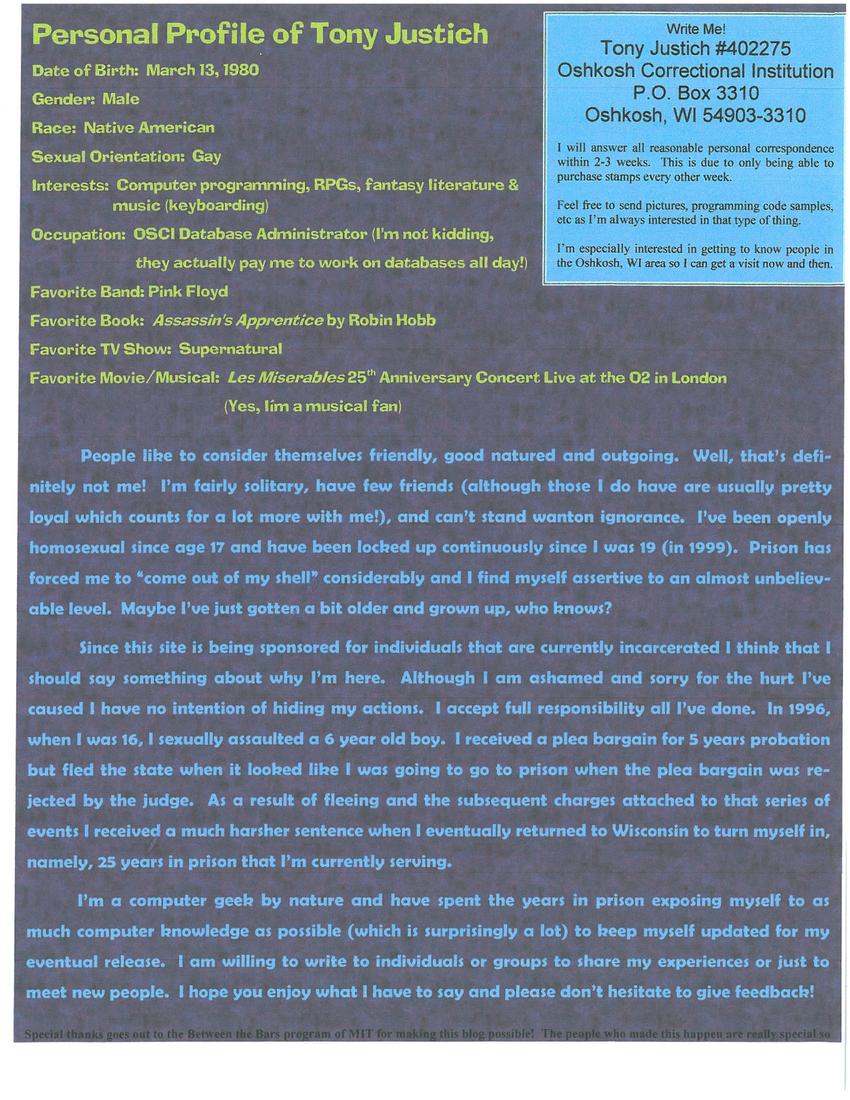 I will answer all reasonable personable correspondence within two-three weeks. This is due to only being able to purchase stamps every other week.

I'm especially interested in getting to know people in the Oshkosh, WI area so I can get a visit now and then.

People like to consider themselves friendly, good natured, and outgoing. Well, that's definitely not me! I'm fairly solitary, have few friends (although those I do have are usually pretty loyal, which counts for a lot more with me!), and can't stand wanton ignorance. I've been openly homosexual since I was 17 and have been locked up continuously since I was 19 (in 1999). Prison has forced me to "come out of my shell" considerably, and I find myself assertive to an almost unbelievable level. Maybe I've just gotten a bit older and grown up, who knows?

Since this site is being sponsored for individuals who are currently incarcerated, I think that I should say something about why I'm here. Although I am ashamed and sorry for the hurt I've caused, I have no intention of hiding my actions. I accept full responsibility for all I've done. In 1996, when I was 16, I sexually assaulted a 6-year-old boy. I received a plea bargain for five years probation but fled the state when it looked like I was going to go to prison when the plea bargain was rejected by the judge. As a result of fleeing and the subsequent charges attached to that series of events, I received a much harsher sentence when I eventually returned to Wisconsin to turn myself in. Namely, 25 years in prison that I'm currently serving.

I'm a computer geek by nature and have spent the years in prison exposing myself to as much computer knowledge as possible, which is surprisingly a lot, to keep myself updated for my eventual release. I am willing to write to individuals or groups to share my experience, or just to meet new people. I hope you enjoy what I have to say and please don't hesitate to give feedback!

Special thanks goes out to Between the Bars of MIT for making this blog possible! The people who made this happen are really special. :)