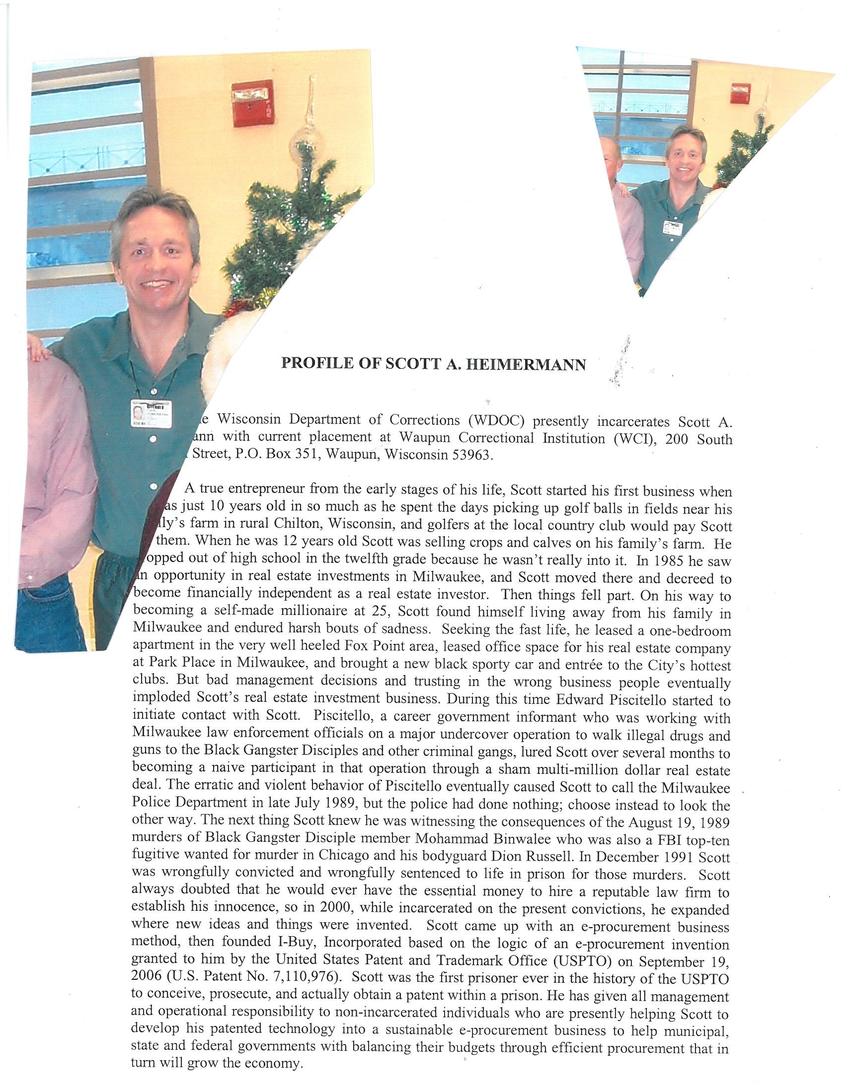 [Cut up colored photos of the author. He's wearing a green shirt and is smiling at the camera. It partially covers up the writing so the transcription will be incomplete to reflect this as "—".]

PROFILE OF SCOTT A. HEIMERMANN

A true entrepreneur from the early stages of his life, Scott started his first business when
—as just ten years old, in so much as he spent the days picking up golf balls in fields near his
—lly's farm in rural Chilton, Wisconsin. Golfers at the local country club would pay Scott
—them. When he was 12 years old, Scott was selling crops and calves on his family's farm. He
—opped out of high school in the twelfth grade because he wasn't really into it.

In 1985, he saw
—n opportunity in real estate investments in Milwaukee, and Scott moved there and decreed to
become financially independent as a real state investor. Then things fell apart. On his way to
becoming a self-made millionaire at 25, Scott found himself living away from his family in
Milwaukee and endured harsh bouts of sadness. Seeking the fast life, he leased a one-bedroom
apartment in a very well heeled Fox Point area, leased office space for his real estate company
at Park Place in Milwaukee, and brought a new black sporty car and entrée to the to the city's hottest
clubs.

But bad management decisions and trusting in the wrong business people eventually
imploded Scott's real estate investment business. During this time, Edward Piscitello started to
initiate contact with Scott. Piscitello, a career government informant who was working with
Milwaukee law enforcement officials on a major operation to walk illegal drugs and
guns to the Black Gangster Disciples and other criminal gangs, lured Scott over several months to
become a naive participant in that operation through a sham multi-million dollar real estate
deal. The erratic and violent behavior of Piscitello eventually caused Scott to call the Milwaukee
Police Department in late July 1989, but the police did nothing. Chose instead to look the
other way.

The next thing Scott knew he was witnessing the consequences of the August 19, 1989
murders of Black Gangster Disciple member Mohammed Binwalee, who was also a FBI top-ten
fugitive wanted for murder in Chicago, and his bodyguard Dion Russell. In December 1991, Scott
was wrongfully convicted and wrongfully sentenced to life in prison for those murders.

Scott always doubted he would ever have the essential money to hire a reputable law firm to
establish his innocence. So, in 2000, while incarcerated on the present convictions, he expanded
where new ideas and things were invented. Scott came up with an e-procurement business
method, then founded I-Buy, Incorporated, based on the logic of an e-procurement invention
granted to him by the United States Patent and Trademark Office (USPTO) on September 19,
2006 (U.S. Patent No. 7,110,976). Scott was the first prisoner ever in the history of the USPTO
to conceive, prosecute, and actually obtain a patent within a prison.

He has given all management and operational responsibility to non-incarcerated individuals who are
presently helping Scott to develop his patented technology into a sustainable e-procurement business
to help municipal, state, and federal governments with balancing their budges through efficient
procurement that, in turn, will grow the economy.