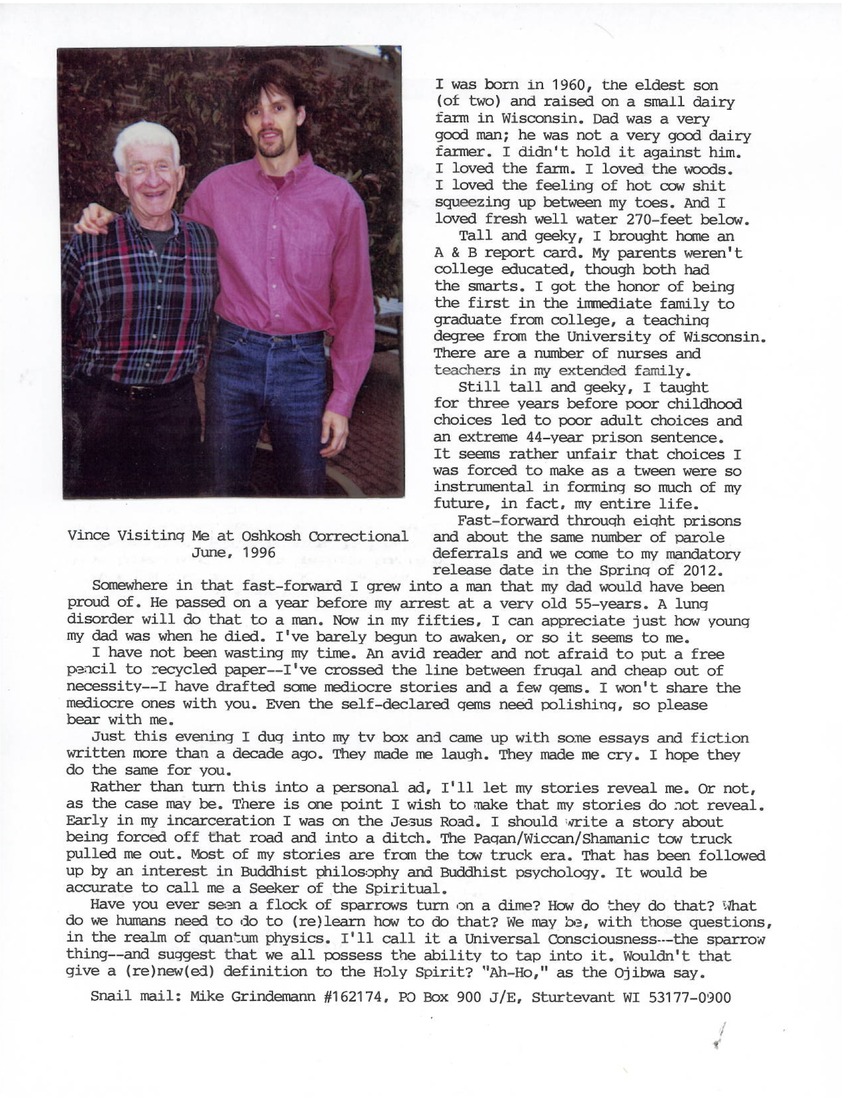 [photo a thin young man standing next to an elderly man. Both are smiling, the younger man a bit awkwardly. Caption: Vince visiting me at Oshkosh Correctional. June, 1996]

I was born in 1960, the eldest son of two and raised on a small dairy farm in Wisconsin. Dad was a very good man; he was not a very good dairy farmer. I didn't hold it against him. I loved the farm. I loved the woods. I loved the feeling of hot cow shit squeezing between my toes. And I loved fresh well water 270-feet below.

Tall and geeky, I brought home an A&B report card. My parents weren't college educated, though both had the smarts. I got the honor of being the first in the immediate family to graduate from college, a teaching degree from the University of Wisconsin. There are a number of nurses and teachers in my extended family.

Still tall and geeky, I taught for three years before poor childhood choices led to poor adult choices and an extreme 44 year prison sentence. It seems rather unfair that choices I was forced to make as a tween were so instrumental in forming so much of my future, in fact, my entire life.

Fast-forward through eight prisons and about the same number of parole deferrals, and we come to my mandatory release date in the spring of 2012. Somewhere in that fast-forward, I grew into a man that my dad would have been proud of. He passed on a year before my arrest at a very old 55 years. A lung disorder will do that to a man. Now in my fifties, I can appreciate just how young my dad was when he died. I've barely begun to awaken, or so it seems to me.

I have not been wasting my time. An avid reader and not afraid to put a free pencil to recycled paper, I've crossed the line between frugal and cheap out of mediocre ones with you. Even the self-declared gems need polishing, so please bear with me.

Just this evening, I dug into my TV box and came up with some essays and fiction written more than a decade ago. They made me laugh. They made me cry. I hope they do the same for you.

Rather than turn this into a personal ad, I'll let my stories reveal me, Or not, as the case may be. There is one point I wish to make that my stories do not reveal. Early in my incarceration, I was on the Jesus Road. I should write a story about being forced off that road and into a ditch. The Pagan/Wiccan/Shamanic to truck pulled me out. Most of my stories are from the tow truck era. That has been followed up by an interest in Buddhist philosophy and Buddhist psychology. It would be accurate to call me a seeker of the spiritual.

Have you ever seen a flock of sparrows turn on a dime? How do they do that? What do we humans need to do to (re)learn how to do that? We may be with those questions, in the realm of quantum physics. I'll call it a universal consciousness—the sparrow thing—and suggest that we all possess the ability to tap into it. Wouldn't that give a renewed definition to the Holy Spirit? Ah-ho as the Ojibwa say.