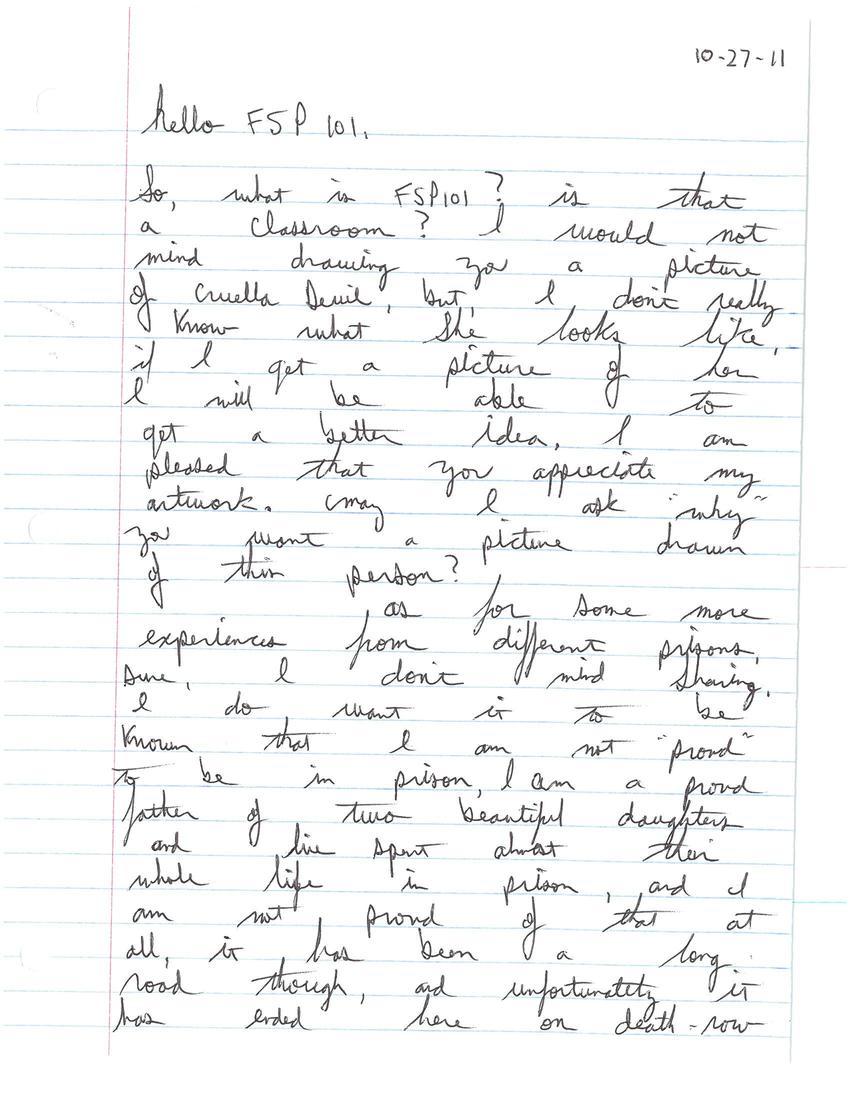 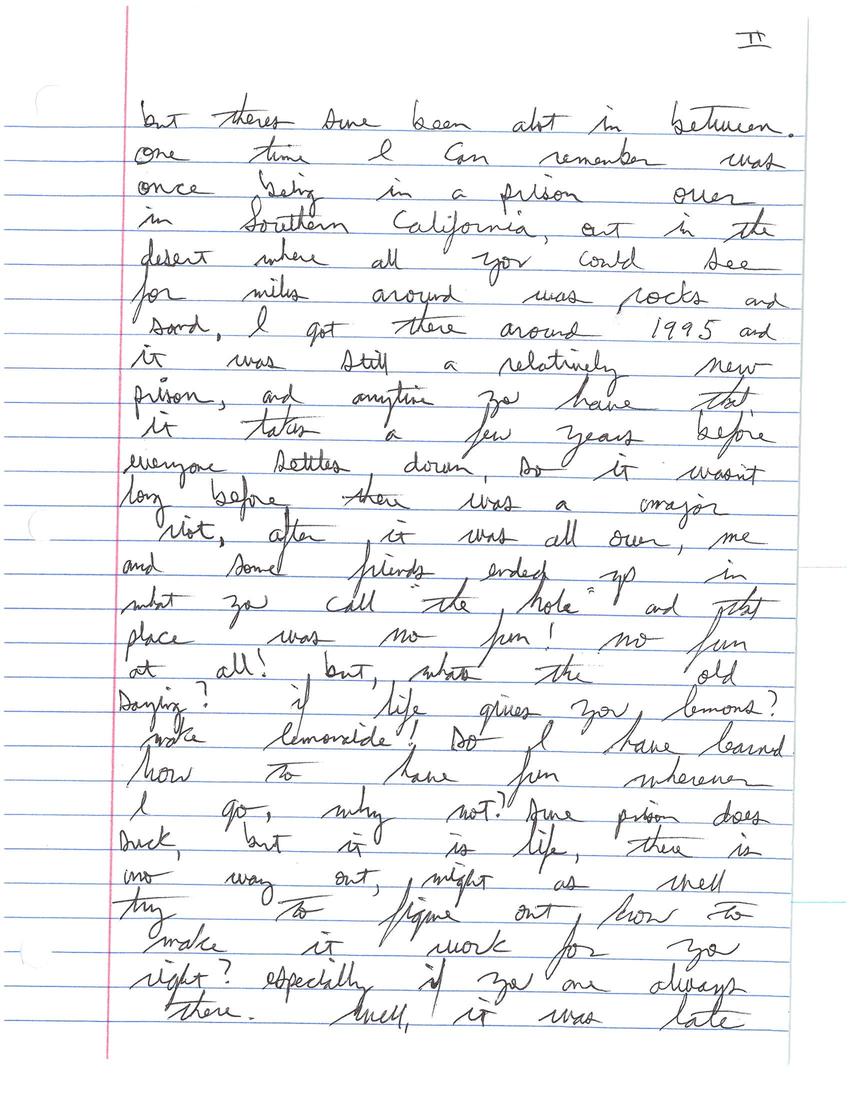 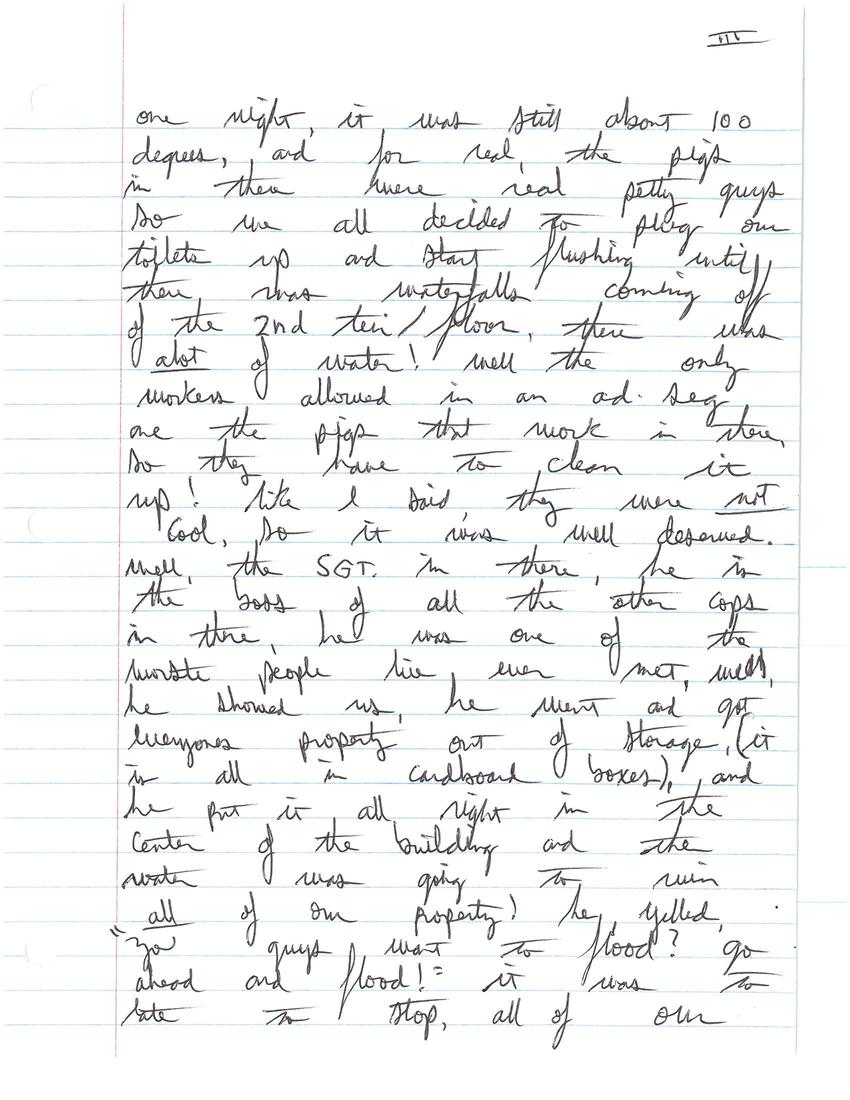 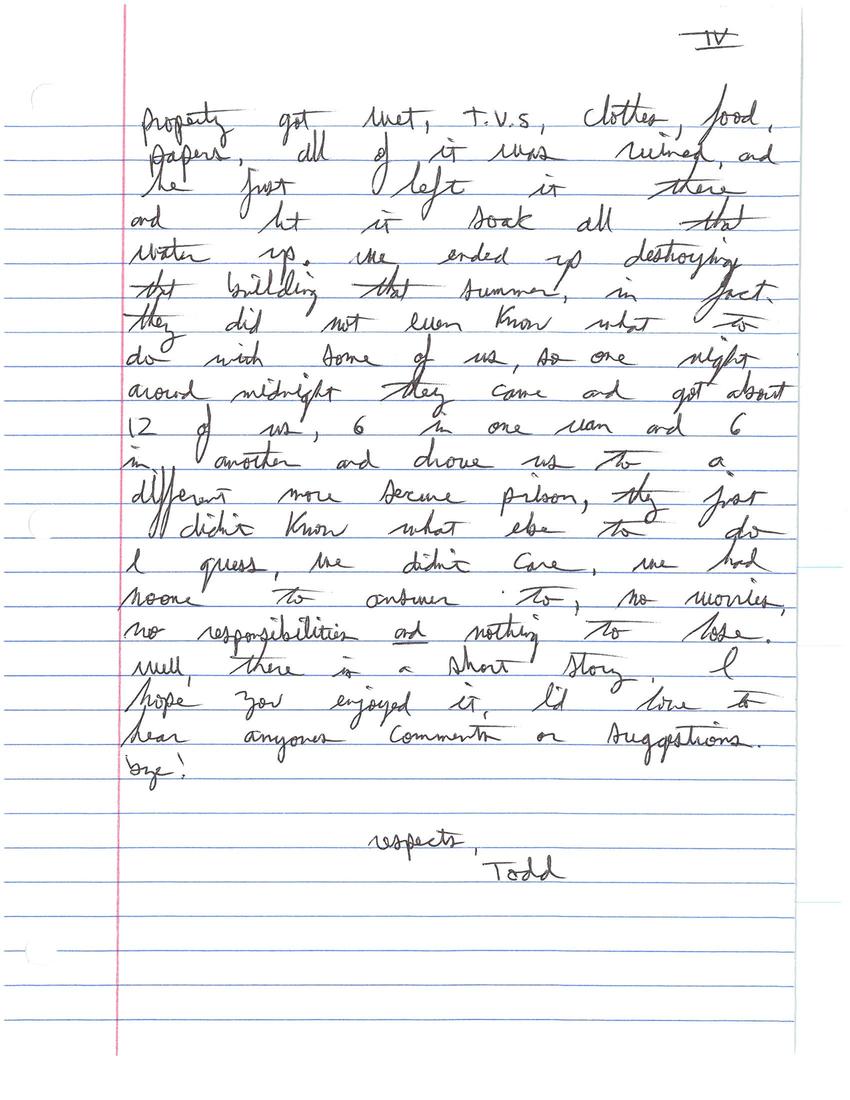 I would not mind drawing you a picture of Cruella Devil, but I don't really know what she looks like. If I get a picture of her, I will be able to get a better idea. I am pleased that you appreciate my artwork. May I ask why you want a picture drawn of this person?

As for some more experiences from different prisons, sure. I don't mind sharing. I do want it to be known that I am not proud to be in prison. I am a proud father of two beautiful daughters and I've spent about their whole lives in prison. I am not proud of that at all. It has been a long road though, and unfortunately it has ended here on death row. But there's been a lot in between.

One time I can remember was being in a prison in Southern California, out in the desert where all you could see for miles around was rocks and sand. I got there around 1995 and it was still a relatively new prison. Anytime you have that, it takes a few years before everyone settles down. So it wasn't long before there was a major riot. After it was all over, me and some friends ended up in what you call "the hole" and that place was no fun! No fun at all!

But what's the old saying? If life gives you lemons, make lemonade! So I have learned how to have fun wherever I go. Why not? Sure, prison does suck, but it is life. There is no way out. Might as well try to figure out how to make it work for you, right? Especially if you are always there.

Well, it was late one night. It was still about 100 degrees and, for real, the pigs in there were real pretty guys. So we all decided to plug our toilets up and stay flushing until there was waterfalls coming out of the second floor. There was a lot of water! Well, the only workers allowed in an ad-seg are the pigs that work in there, so they have to clean it up. Like I said, they were not cool so it was well deserved.

Well, the Sgt. there, he is the boss of all the other cops in there. He was one of the [illegible] people I've ever met. Well, he showed us. He went and got everyone's property out of storage (it is all in cardboard boxes) and he put it all right in the center of the building and the toilet was going to ruin all of our property! He yelled, "You guys want to flood? Go ahead and flood!" It was too late to stop. All of our property got wet, TVs, clothes, food, papers. All of it was ruined and he just left it there. They soaked up all that water up, destroying that building that summer. In fact, they did not even know what to do with some of us.

So one night, around midnight, they came and got about 12 of, 6 in one car and 6 in another, and drove us to a different more secure prison. They just didn't know what else to do, I guess. We didn't care. We had no one to answer to, no worries, no responsibilities, and nothing to lose.

Well, there is a short story. I hope you enjoyed it. I'd love to hear anyone comment or suggest something. Bye!

Hey Todd my name is Debbie I'm from tulare and my ex knows you I don't care what anyone says I've been told by many people that your solid and I like your art its the shit I will continue to read what you write draw etc...thanks den