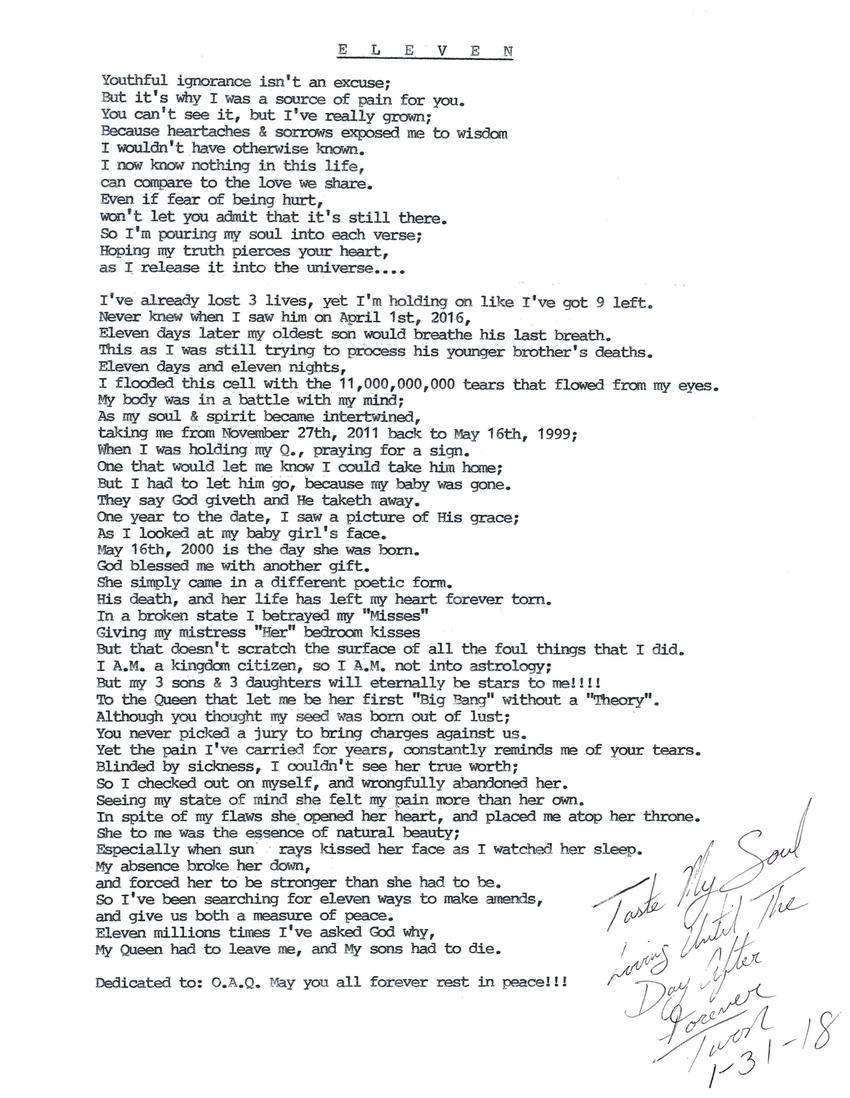 Youthful ignorance isn't an excuse;
But it's why I was a source of pain for you.
You can't see it, but I've really grown;
Because heartaches and sorrows exposed me to wisdom
I wouldn't have otherwise known.
I now know nothing in this life,
can compare to the love we share.
Even if fear of being hurt,
won't let you admit that it's still there.
So I'm pouring my soul into each verse;
Hoping my truth pierces your heart,
as I release it into the universe...

I've already lost three lives, yet I'm holding on like I've got nine left.
Never knew when I saw him on April 1st, 2016
Eleven days later my oldest son would breathe his last breath.
This as I was still trying to process his younger brother's deaths.
Eleven days and eleven nights
I flooded this cell with the 11,000,000,000 tears that flowed from my eyes.
My body was in a battle with my mind;
As my soul and spirit became interwined
taking me from November 27th, 2011 back to May 16th, 1999
When I was holding my Q., praying for a sign.
One that would let me know I could take him home
But I had to let him go because my baby was gone.
They say God giveth and He taketh away.
One year to the date, I saw a picture of His grace
As I looked at my baby girl's face.
May 16th, 2000 is the day she was born.
God blessed me with another gift.
She simply came in a different poetic form.
His death and her life has left my heart forever torn.
In a broken state I betrayed my Misses
Giving my mistress her bedroom kisses
But that doesn't scratch the surface of all the foul things I did.
I A.M. a kingdom citizen so I A.M. not into astrology;
But my three sons and three daughters will eternally be stars to me!
To the queen that let me be her first big bang without a theory.
Although you thought my seed was born out of lust
You never picked a jury to bring charges against us.
Yet the pain I've carried for years constantly reminds me of your tears.
Blinded by sickness I couldn't see her true worth
So I checked out on myself and wrongfully abandoned her
Seeing my state of mind she felt my pain more than her own.
In spite of my flaws she opened her heart and placed me atop her throne.
She to me was the essence of natural beauty
Especially when sun rays kissed her face as I watched her sleep.
My absence broke her down
and forced her to be stronger when she had to be.
So I've been searching for eleven ways to make amends
and give us both a measure of peace.
Eleven millions times I've asked God why
My queen had to leave me and my sons had to die.

Dedicated to O.A.Q. May you all forever rest in peace!

DAAAAMNNNNN THAT BAR WAS FIIIIRE!!!! HOLY SHIIIIIIIIIIIT!
This bar is soo fire oh my gosh you are lyrical!!

“I A.M. a kingdom citizen so I A.M. not into astrology;
But my three sons and three daughters will eternally be stars to me!”

Oooooh shiiit!!! Heard explosions in the background of that one, I’m a hip hop head! “God giveth and god taketh the away” reminds me of a song by Royce 5’9”
(scanned reply – view as blog post)
uploaded Aug. 11, 2018.  Original (PDF) 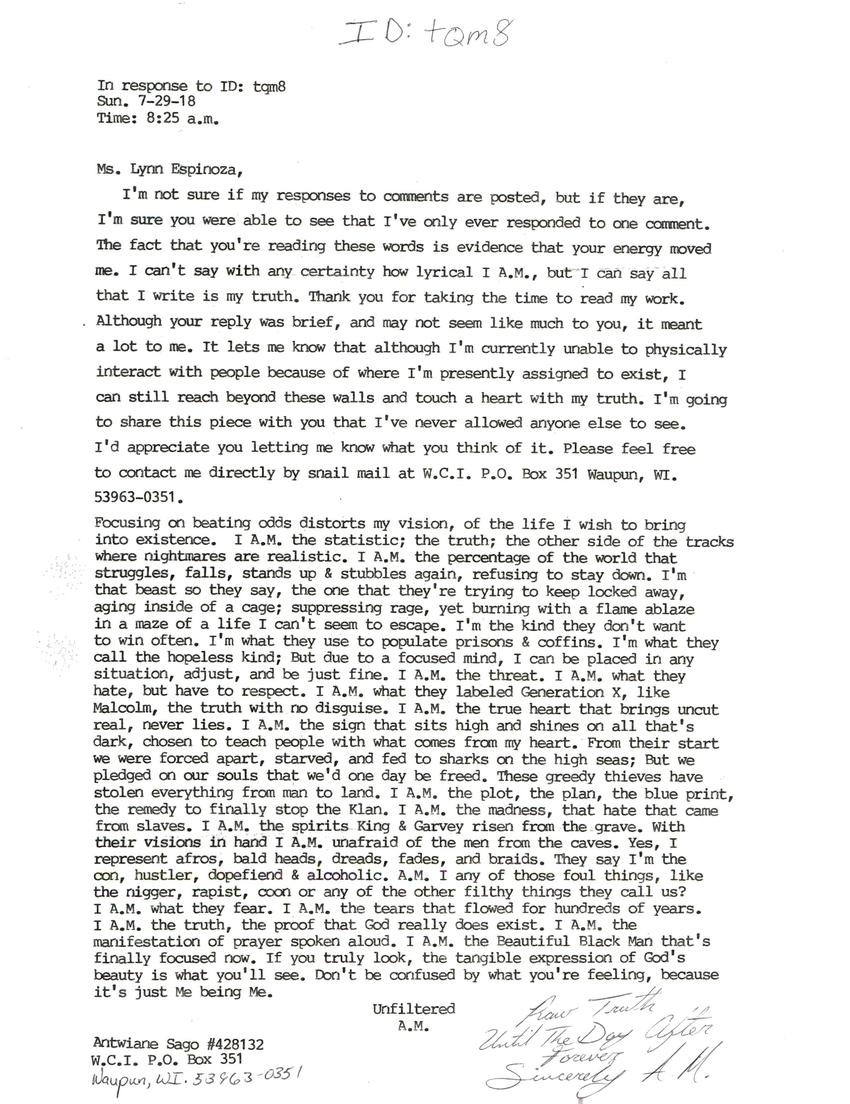