The Execution Of Scott Rose 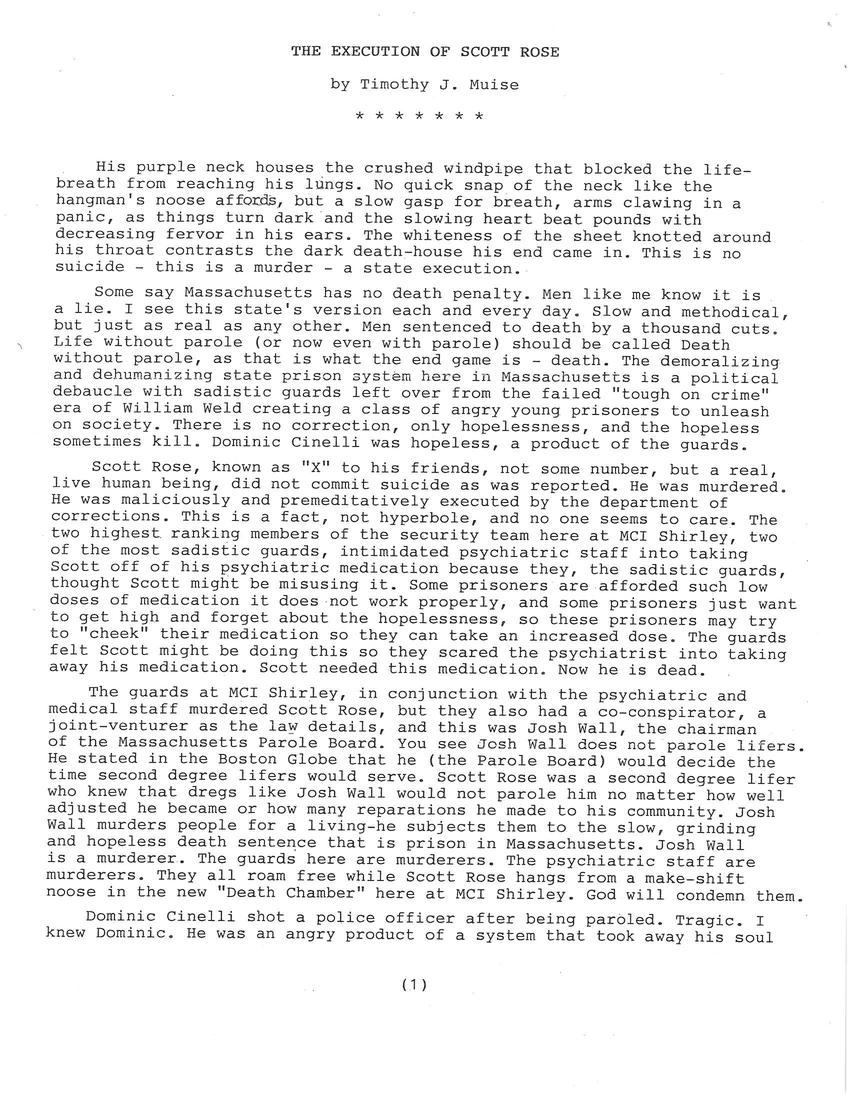 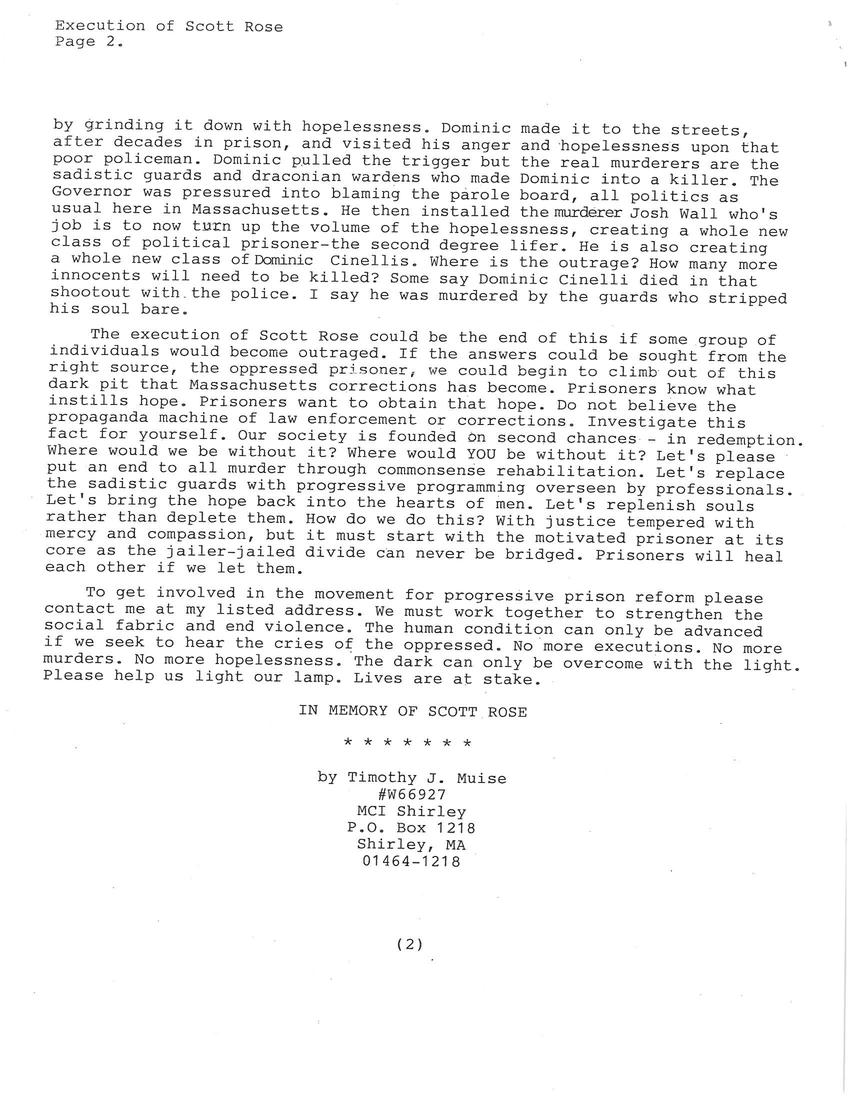 His purple neck houses the crushed windpipe that blocked the life-breath from reaching his lungs. No quick snap of the neck like the hangman's noose affords, but a slow gasp for breath, arms clawing in a panic, as things turn dark and the slowing heart beat pounds with decreasing fervor in his ears. The whiteness of the sheet knotted around his throat contrasts the dark death-house his end came in. This is no suicide - this is a murder - a state execution.

Some say Massachusetts has no death penalty. Men like me know it is a lie. I see this state's version each and every day. Slow and methodical, but just as real as any other. Men sentenced to death by a thousand cuts. Life without parole (or now even with parole) should be called Death without parole, as that is what the end game is - death. The demoralizing and dehumanizing state prison system here in Massachusetts is a political debacle with sadistic guards left over from the failed "tough on crime" era of William Weld creating a class of angry young prisoners to unleash on society. There is no correction, only hopelessness, and the hopeless sometimes kill. Dominic Cinelli was hopeless, a product of the guards.

Scott Rose, known as "X" to the his friends, not some number, but a real, live human being, did not commit suicide as reported. He was murdered. He was maliciously and premeditatively executed by the department of corrections. This is a fact, not hyperbole, and no one seems to care. The two highest ranking members of the security team here at MCI Shirley, two of the most sadistic guards, intimidated psychiatric staff into taking Scott off of his psychiatric medication because they, the sadistic guards, thought Scott might be misusing it. Some prisoners are afforded such low doses of medication it does not work properly, and some prisoners just want to get high and forget about the hopelessness, so these prisoners may try to "cheek" their medication so they can take an increased dose. The guards felt Scott might be doing this so they scared the psychiatrist into taking away his medication. Scott needed this medication. Now he is dead.

The guards at MCI Shirley, in conjunction with the psychiatric and medical staff, murdered Scott Rose, but they also had a co-conspirator, a joint-venturer as the law details, and this was Josh Wall, the chairman of the Massachusetts Parole Board. You see, Josh Wall does not parole lifers. he stated in the Boston Globe that he (the Parole Board) would decide the time second degree lifers would serve. Scott Rose was a second degree lifer who knew that dregs like Josh Wall would not parole him, no matter how well adjusted he became or how many reparations he made to his community. Josh Wall murders people for a living - he subjects them to the slow, grinding and hopeless death sentence that is prison in Massachusetts. Josh Wall is a murderer. The guards here are murderers. The psychiatric staff are murderers. They all roam free while Scott Rose hangs from a makeshift noose in the new "Death Chamber" here at MCI Shirley. God will condemn them.

Dominic Cinelli shot a police officer after being paroled. Tragic. I knew Dominic. He was an angry product of a system that took away his soul by grinding it down with hopelessness. Dominic made it to the streets, after decades in prison, and visited his anger and hopelessness upon that poor policeman. Dominic pulled the trigger but the real murderers are the sadistic guards and draconian wardens who made Dominic into a killer. The Governor was pressured into blaming the parole board, all politics as usual here in Massachusetts. He then installed the murderer Josh Wall, whose job is to now turn up the volume of the hopelessness, creating a whole new class of political prisoner - the second degree lifer. He is also creating a whole new class of Dominc Cinellis. Where is the outrage? How many more innocents will need to be killed? Some say Dominic Cinelli died in that shootout with the police. I say he was killed by the guards who stripped his soul bare.

The execution of Scott Rose could be the end of this if some group of individuals would become outraged. If the answers could be sought from the right source, the oppressed prisoner, we could begin to climb out of this dark pit that Massachusetts corrections has become. Prisoners know what instills hope. Prisoners want to obtain that hope. Do not believe the propaganda machine of law enforcement or corrections. Investigate this fact for yourself. Our society is founded on second chances - in redemption. Where would we be without it? Where would you be without it? Let's please put an end to all murder through common sense rehabilitation. Let's replace the sadistic guards with progressive programming overseen by professionals. Let's bring the hope back into the hearts of men. Let's replenish souls rather than deplete them. How do we do this? With justice tempered with mercy and compassion, but it must start with the motivated prisoner at its core, as the jailer-jailed divide can never be bridged. Prisoners will heal each other if we let them.

To get involved in the movement for progressive prison reform, please contact me at my listed address. We must work together to strengthen the social fabric and end violence. The human condition can only be advance if we seek to hear the cries of the oppressed. No more executions. No more murders. No more hopelessness. The dark can only be overcome with the light. Please help us light our lamp. Lives are at stake.

IN MEMORY OF SCOTT ROSE

Thanks for writing! I finished the transcription for your post.
If they would of left Scott at Mci Norfolk with Richie 2 years ago he would still be alive and doing good. But they moved him because someone claim him as an enemy so he got moved he was only there for about 2 week..what you wrote about Scott was awesome...I sent a copy to Richie..i hope lots of people see you wed site

I would love to get involved..Sorry i have not got no here in a very long time..I will be writing you this weekend i would love to help you in anyway i can out of all the people i've meet of richie ppl x has a special place in my heart
Dear Mr. Timothy Muise,

My name is Michael Jo Santos and I am the brother of the 14 year old child that was murdered by Timothy Reeves, Scott Rose, Richard Hazard and Michael Coul. As I appreciate your diligence for well needed change I feel that your readers are not getting the whole story, at least when it comes to your article in reference to Scott Rose. Before I begin please know that I empathize with the families of the four individuals that were convicted because just like my family they lost someone also. They are grieving as my family is grieving. In fact when we heard the news about Scott Rose someone said to me “you must be happy” and my reply was “why would I be happy? This not only doesn’t bring my brother back but now his family is grieving even harder. “

I noticed that in your article you failed to mention my 14 year old brother who was murdered before his life even began. In fact this happened in my presence and it almost destroyed me. No mention in your article on the families that were destroyed, (not just mine but the convicted) just the system that seems to punish more than it does rehabilitate. You see, I am a firm believer that the justice system needs a huge makeover and has been long overdue. I also believe that with the 13th amendment having a loophole that states (and I’m paraphrasing) Slavery is unconstitutional unless one is a prisoner needs to be amended so there isn’t incentive to criminalize people for profit. However, I also believe in personal responsibility.

I am aware of all the obstacles we face with poverty, guns, drugs, mental instability and the list goes on and the prison systems that need to be restructured in a way that the recidivism rate declines to the highest minimum. With that said I am going to quote a great man you should research that I refer to as the father of the West African revolution and sparked the armed struggle for the Portuguese colonies of Africa, His name is Amilcar Cabral. “Who is this enemy who dominates us, stubbornly scorning all laws, all international legality and morality? This enemy is not the Portuguese people, nor even Portugal itself: for us, fighting for the freedom of the Portuguese colonies, the enemy is Portuguese colonialism” What he meant by that was it was the system, not the people that was in need of change and so the people wasn’t the enemy. He knew as human beings we all want the same things in life.

I don’t think that what you’re fighting against is a Josh Wall problem and it seems that he and a few correctional officers being targeted in your writings and being classified as “murderers” defeats your purpose and is to me a false statement. They are human beings, they’re not the system. They have families and problems just like any other person. I feel that you calling them murderers but painting Scott Rose as the victim of Josh Wall is wrong.... (Continued in next box)
Their actions not only snuffed out a 14 year old child’s life but also negatively changed the lives of that child’s whole family. To me that is even more unjust to my family then what happened to Mr. Rose not getting his proper medication.

Again, individual responsibility goes a long way. The action of these four men wasn’t sporadic as they left and came back hours and hours later. They had much time to think about falling back instead of driving a 60 mile round trip just to come back emptying a magazine of 9mm bullets into a crowd with woman and children in it. There is no excuse in the world for inhumane crimes against our children. In fact I feel that with the system being so flawed it is that much more of a reason we should work on ourselves. The real victim here was 14 year old Daniel “D.J.” Correia who at the tender age of 14 was fighting for change and would have grown to be a fighter had he was given the chance.

I will always hope for change that will bring out the best in everyone and will never give up. It will one day come but we as a people need to hold ourselves just as accountable as we hold the system. It is only then we will see the change we all seek. It won’t be easy.