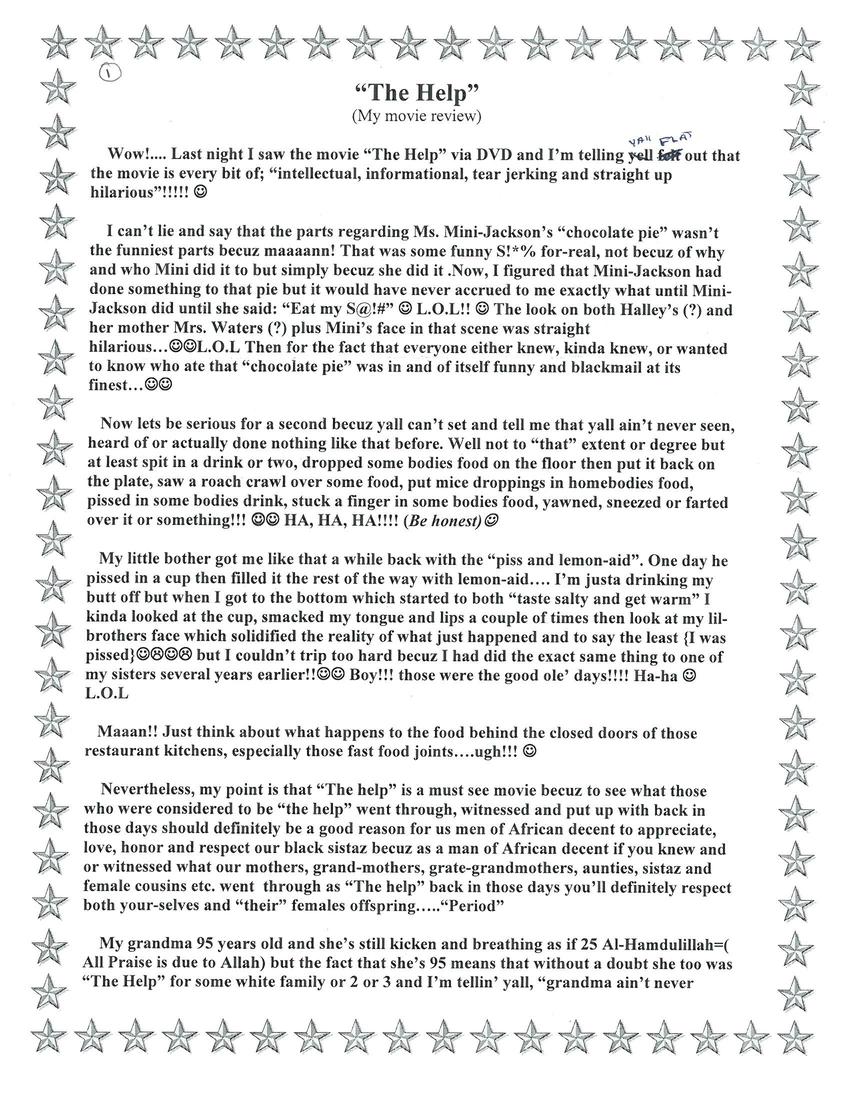 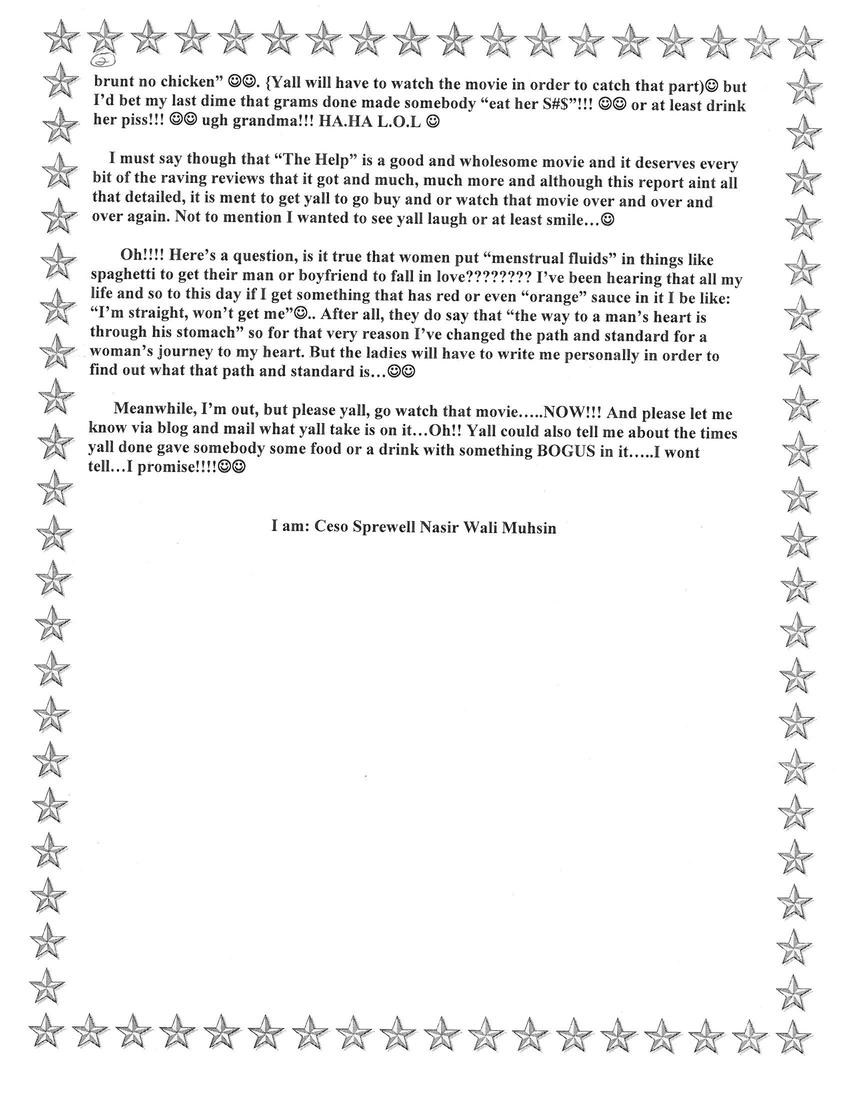 "The Help"
(My movie review)

Wow! ... Last night I saw the movie "The Help" via DVD and I'm telling y'all flat out that the movie is every bit of; "intellectual, informational, tear jerking and straight up hilarious"!!!!! :)

I can't lie and say that the parts regarding Ms. Mini Jackson's "chocolate pie" wasn't the funniest parts because maaaann! That was some funny S!*% for real, not because of why and who Mini did it to but simply because she did it. Now, I figured that Mini Jackson had done something to that pie but it would have never occurred to me exactly what until Mini Jackson did until she said: "Eat my S@!#" :) L.O.L.!! :) The look on both Halley's (?) and her mother Mrs Waters (?) plus Mini's face in that scene was straight hilarious... :) :) L.O.L. Then for the fact that everyone either knew, kinda knew, or wanted to know who ate that "chocolate pie" was in and of itself funny and blackmail at its finest... :) :)

Now let's be serious for a second because y'all can't set and tell me that y'all ain't never seen, heard of or actually done nothing like that before. Well, not to THAT extent or degree but at least spit in a drink or two, dropped somebody's food on the floor then put it back on the plate, saw a roach crawl over some food, put mice droppings in somebody's food, pissed in somebody's drink, stuck a finger in somebody's food, yawned, sneezed or farted over it or something!!! :) :) HA, HA, HA!!!! (Be honest) :)

My little brother got me like that a while back with the "piss and lemonade". One day he pissed in a cup then filled it the rest of the way with lemonade... I'm just drinking my butt off but when I got to the bottom which started to both "taste salty and get warm" I kinda looked at the cup, smacked my tongue and lips a couple of times then look at my lil brother's face, which solidified the reality of what just happened and to say the least {I was pissed} :) :( :) :( but I couldn't trip too hard because I had did the exact same thing to one of my sisters several years earlier!! :) :) Boy!!! Those were the good ole' days!!!! Ha-ha :) L.O.L.

Maaan!! Just think about what happens to the food behind the closed doors of those restaurant kitchens, especially those fast food joints... ugh!!! :)

Nevertheless, my point is that "The Help" is a must see movie because to see what those who were considered to be "the help" went through, witnessed and put up with back in those days should definitely be a good reason for us men of African descent to appreciate, love, honor and respect our black sistaz because as a man of African descent if you knew and/or witnessed what our mothers, grandmothers, great-grandmothers, aunties, sisters and female cousins etc. went through as "the help" back in those days, you'll definitely respect both yourselves and THEIR female offspring... PERIOD.

I must say though that "The Help" is a good and wholesome movie and it deserves every bit of the raving reviews and much, much more and although this report ain't all that detailed, it is meant to get y'all to go buy and/or watch that movie over and over and over again. Not to mention I wanted to see y'all laugh or at least smile... :)

Oh!!!! Here's a question, is it true that women put "menstrual fluids" in things like spaghetti to get their man or boyfriend to fall in love??????? I've been hearing that all my life and so to this day if I get something that has red or even "orange" sauce in it I be like: "I'm straight, won't get me" :) ... After all, they do say that "the way to a man's heart is through his stomach", so for that very reason I've changed the path and standard for a woman's journey to my heart. But the ladies will have to write me personally in order to find out what that path or standard is... :) :)

You might also enjoy Forrest Gump - there's a scene in it with an elderly black lady (mother/aunt/grandmother of Forrest's friend Bubba) being waited on by a white maid after Forrest's company makes her rich!
(scanned reply – view as blog post)
uploaded March 10, 2013.  Original (PDF) 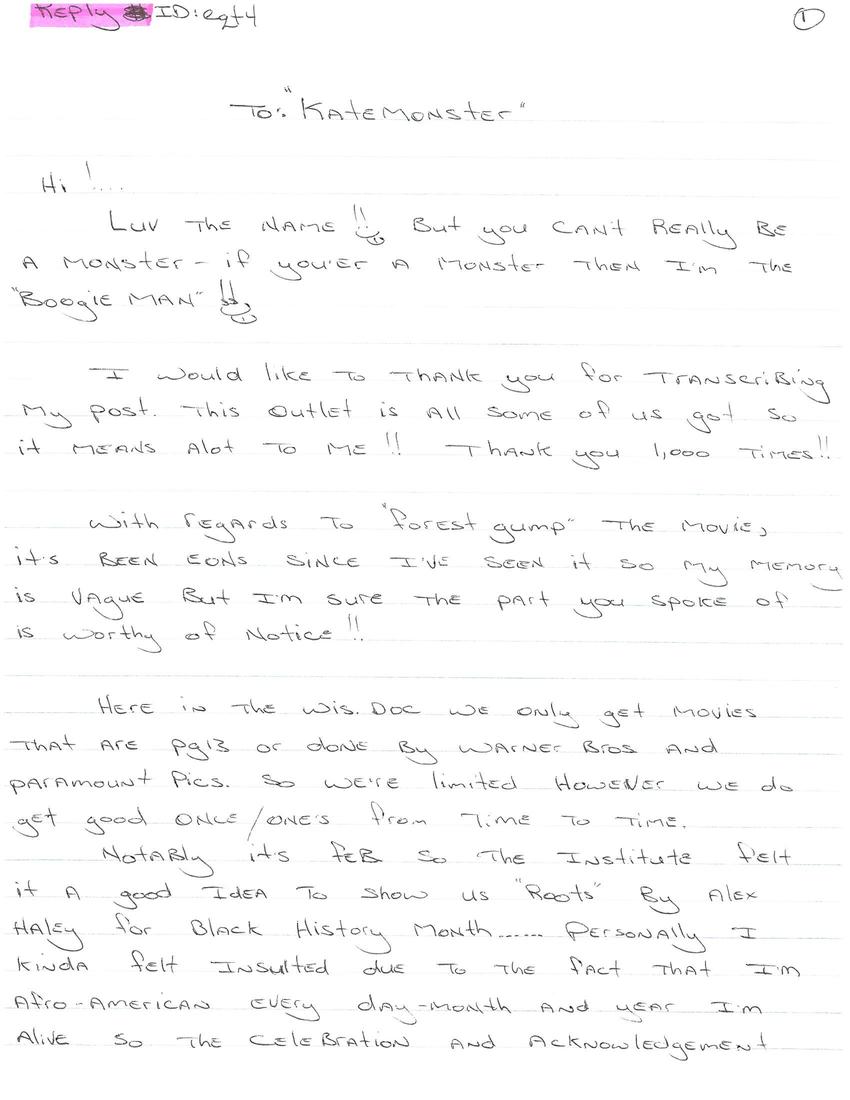 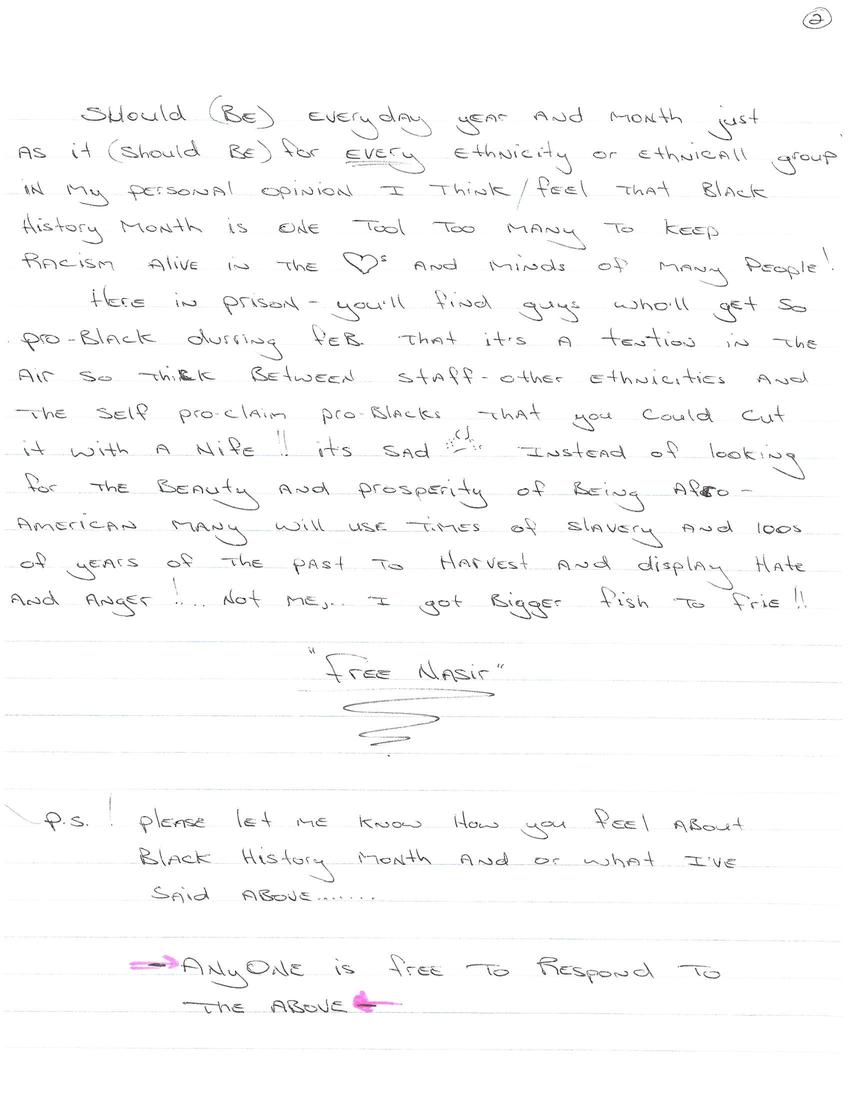