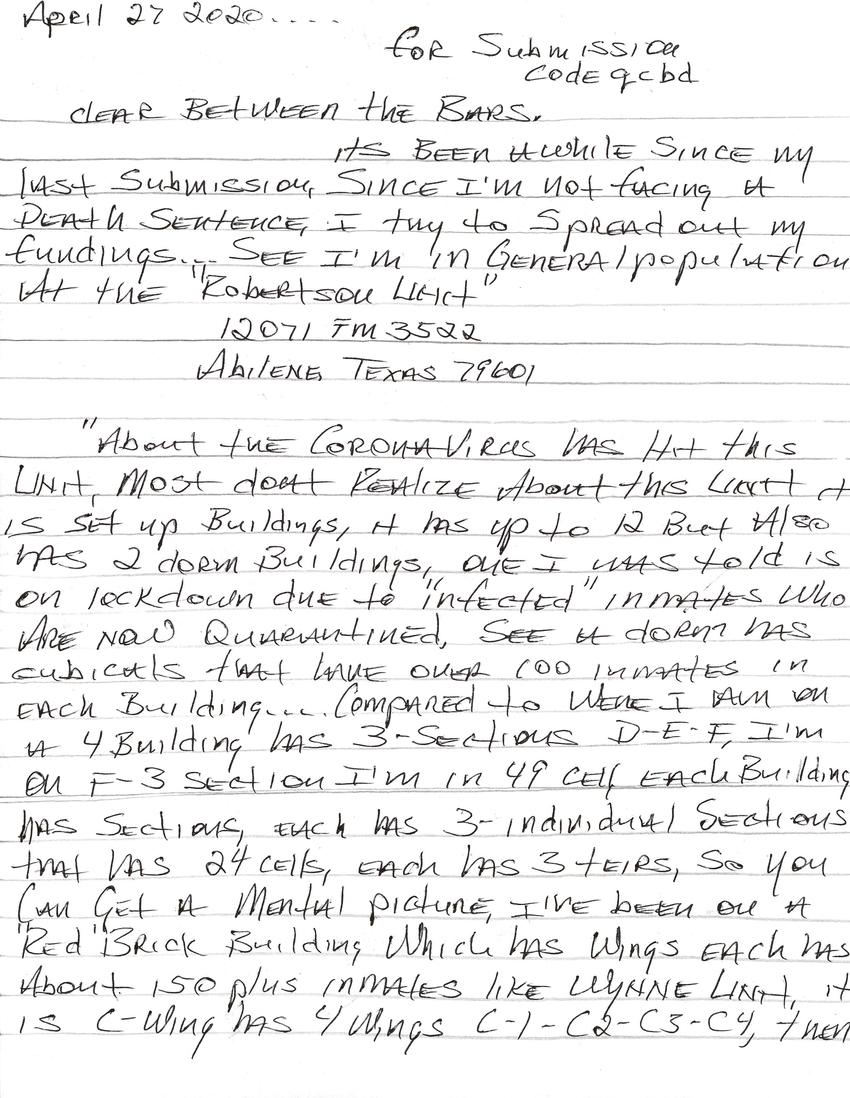 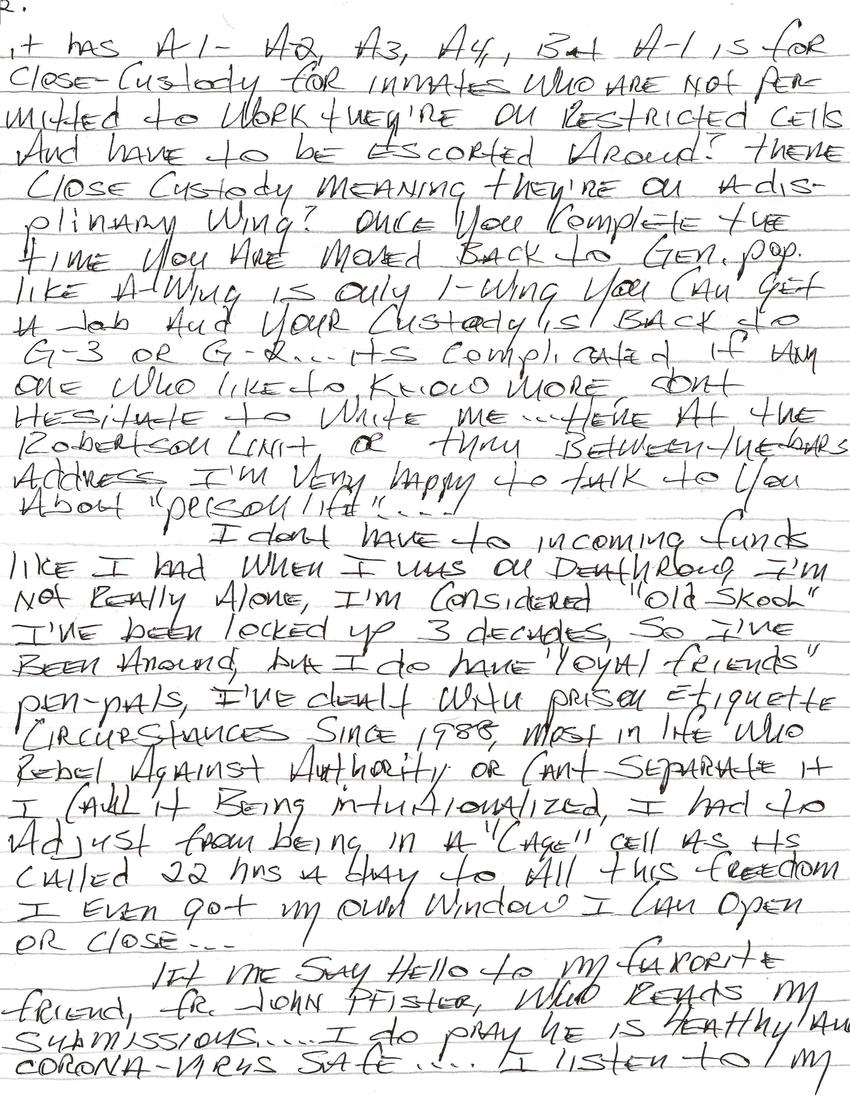 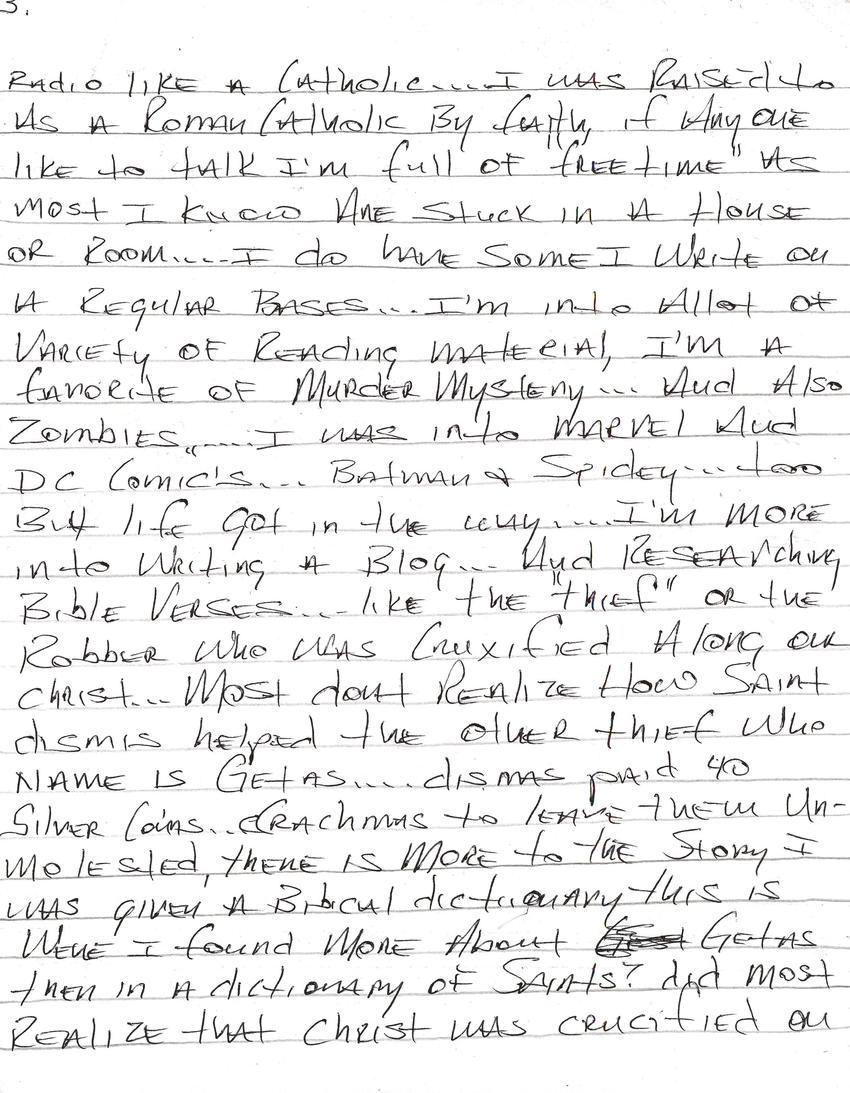 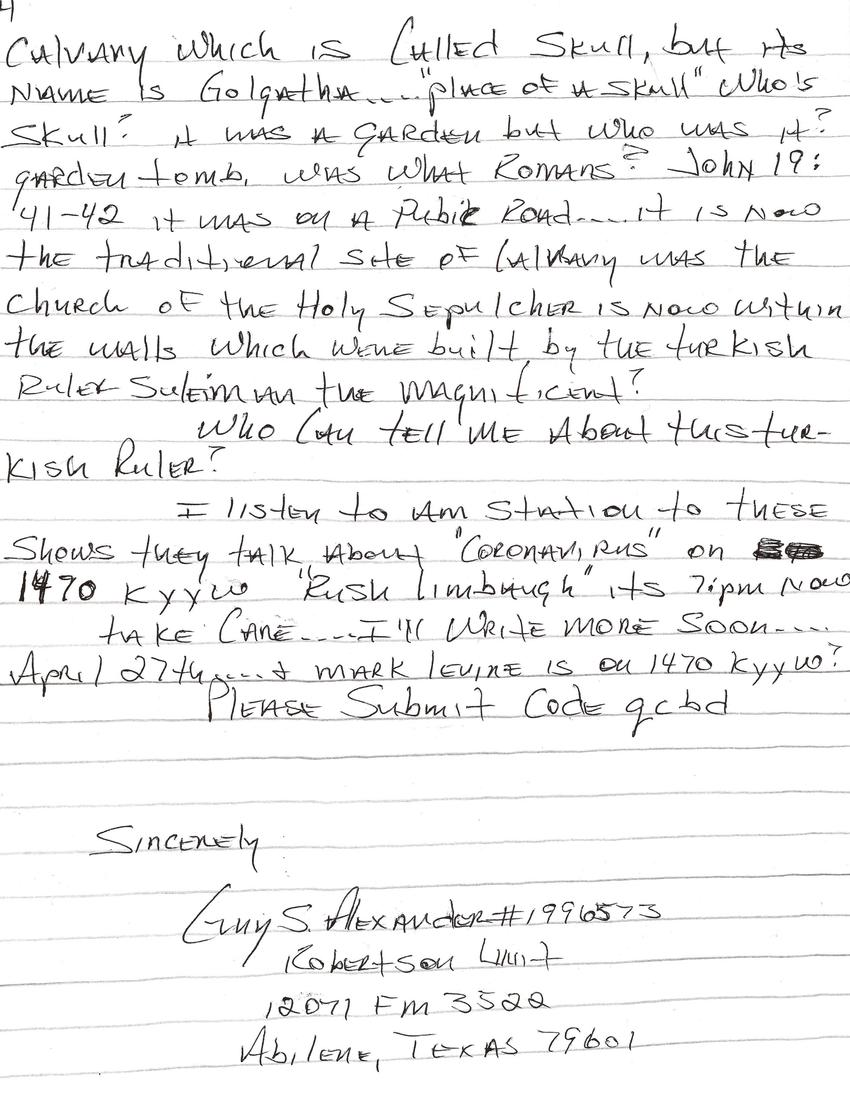 About the coronavirus has hit this unit, most don't realize about this unit it is set up buildings, it has up to 12 but also has 2 dorm buildings, [[?]] I was told is on lockdown due to "infected" inmates who are now quarantined, see it dorm has cubicles that have over 100 inmates in each building...compared to where I am in 4 building has 3--sections D-E-F, I'm on F-3 section I'm in 49 cell, each building has sections, each has 3 individual sections that has 24 cells, each has 3 tiers, so you can get a mental picture, I've been on a 'red' brick building which has wings each has about 150 plus inmates like Wynne Unit, it is C-Wing has 4 wings C-1, C-2, C-3, C-4 then it has A1, A2, A3, A4. But A-1 is for close-custody for inmates who are not permitted to work they're on restricted cells and have to be escorted around? They're Close Custody meaning they're on a disciplinary wing? Once you complete the time you are moved back to gen. pop. like A-Wing is only 1 Wing you can get a job and your custody is back to G-3 or G-2...it's complicated if anyone would like to know more don't hesitate to write me, here at the Robertson Unit or through Between the Bars address, I'm very happy to talk to you about "prison life"...

I don't have to incoming funds like I had when I was on death row, I'm not really alone, I'm considered "Old Skool," I've been locked up 3 decades, so I've been around, but I do have "loyal friends," pen-pals, I've dealt with prison etiquette circumstances since 1988, most in life who rebel against authority or can't separate it I call it being institutionalized, I had to adjust from being in a "cage" cell as it's called 22 hours a day to all this freedom. I even got my own window I can open or close...

Let me say hello to my favorite friend, Father John Pfister, who reads my submissions...I do pray he is healthy and coronavirus-safe...I listen to my radio like a Catholic...I was raised to as a Roman Catholic by faith, if anyone likes to talk I'm full of "free time" as most I know are stuck in a house or room...I do have some I wrote on a regular basis...I'm into a lot of variety of reading material, I'm a favorite of Murder Mystery...and also zombies...I was into Marvel and DC Comics...Batman & Spidey...too but life got in the way...I'm more into writing a blog...and researching Bible verses...like the "thief" or the robber who was crucified along with Christ...most don't realize how Saint Dismas helped the other thief whose name is Getas...Dismas paid 40 silver coins...drachmas to leave them unmolested, there is more to the story I was given a Biblical dictionary this is where I found more about Getas then in a dictionary of Saints? Did most realize that Christ was crucified on Calvary which is called skull, but it's name is Golgatha..."place of a skull" - whose skull? It was a garden but whose was it? Garden tomb, was what Romans? John 19:41-42 it was on a public road...it is now the traditional site of Calvary was the Church of the Holy Sepulcher is now within the wall which were built by the Turkish ruler Suleiman the Magnificent?

Who can tell me about this Turkish ruler?