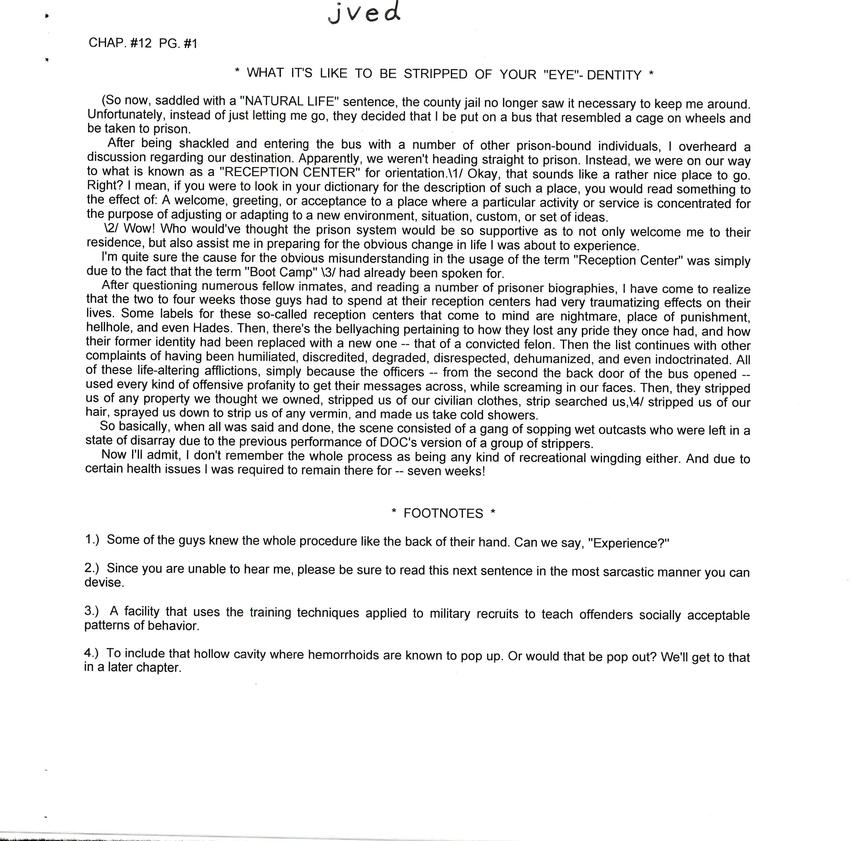 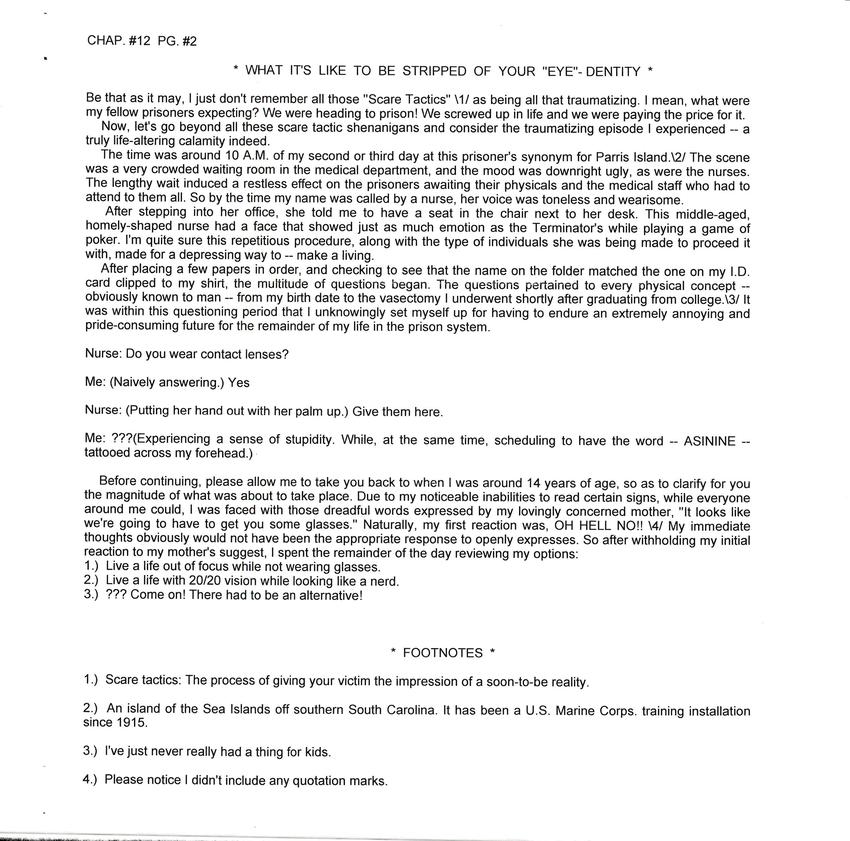 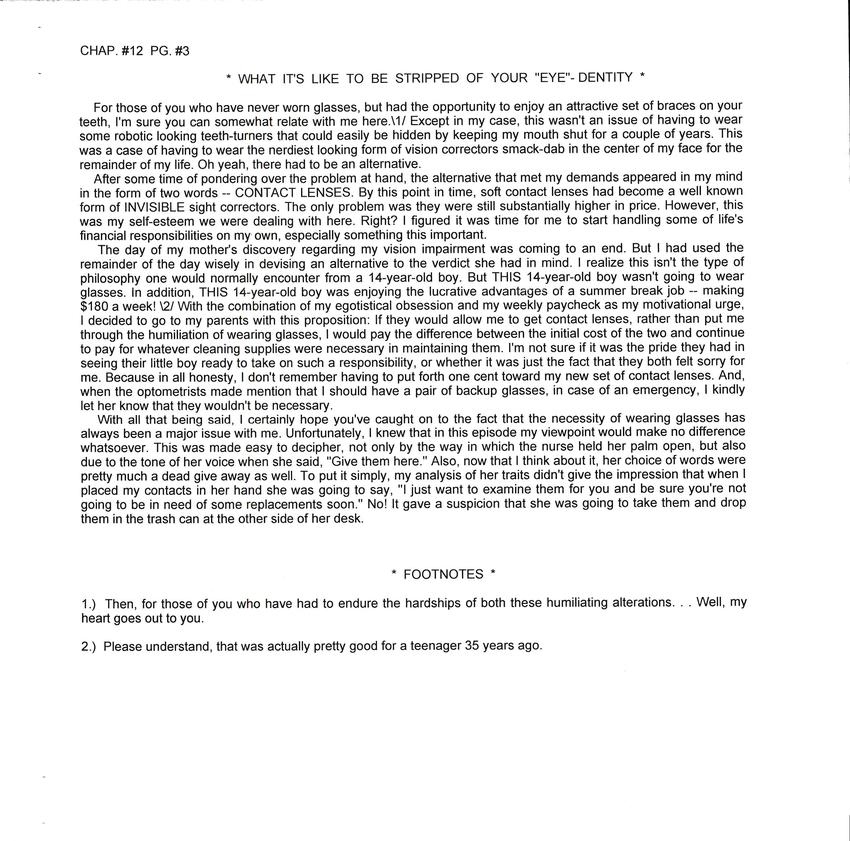 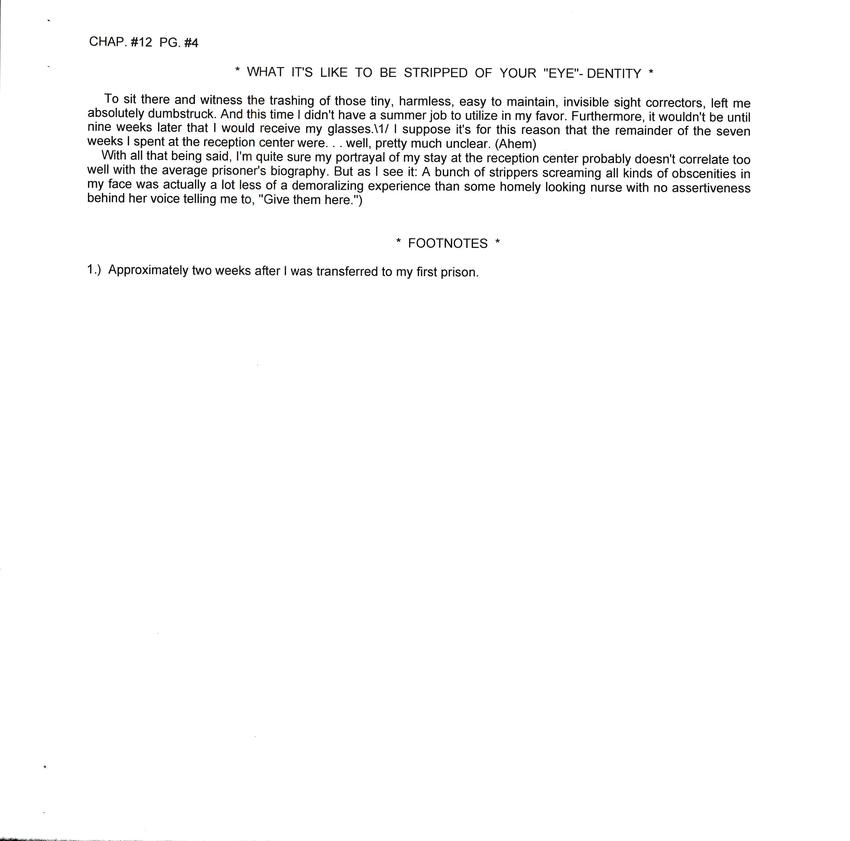 CHAP.#12 PG.#1
* WHAT IT'S LIKE TO BE STRIPPED OF YOUR "EYE"-DENTITY *
(So now, saddled with a "NATURAL LIFE" sentence, the county jail no longer saw it necessary to keep me around. Unfortunately, instead of just letting me go, they decided that I be put on a bus that resembled a cage on wheels and be taken to prison.
After being shackled and entering the bus with a number of other prison-bound individuals, I overheard a discussion regarding our destination. Apparently, we weren't heading straight to prison. Instead, we were on our way to what is known as a "RECEPTION CENTER" for orientation.\1/ Okay, that sounds like a rather nice place to go. Right? I mean, if you were to look in your dictionary for the description of such a place, you would read something to the effect of: A welcome, greeting, or acceptance to a place where a particular activity or service is concentrated for the purpose of adjusting or adapting to a new environment, situation, custom, or set of ideas.
\2/ Wow! Who would've thought the prison system would be so supportive as to not only welcome me to their residence, but also assist me in preparing for the obvious change in life I was about to experience.
I'm quite sure the cause for the obvious misunderstanding in the usage of the term "Reception Center" was simply due to the fact that the term "Boot Camp" \3/ had already been spoken for.
After questioning numerous fellow inmates, and reading a number of prison biographies, I have come to realize that the two to four weeks those guys had to spend at their reception centers had very traumatizing effects on their lives. Some labels for these so-called reception centers that come to mind are nightmare, place of punishment, hellhole, and even Hades. Then there's the bellyaching pertaining to how they lost any pride they once had, and how their former identity had been replaces with a new one -- that of a convicted felon. Then the list continues with other complaints of having been humiliated, discredited, degraded, disrespected, dehumanized, and even indoctrinated. All of these life-altering afflictions, simply because the officers -- from the second the back door of the bus opened -- used every kind of offensive profanity to get their message across, while screaming in our faces. Then, they stripped us of any property we thought we owned, stripped us of our civilian clothes, strip searched us, \4/ stripped us of our hair, sprayed us down to strip us of any vermin, and made us take cold showers.
So basically, when all was said and done, the scene consisted of a gang sopping wet outcasts who were left in a state of disarray due to the previous performance of DOC's version of a group of strippers.
Now I'll admit, I don't remember the whole process as being any kind of recreational wingding either. And due to certain health issues I was required to remain there for -- seven weeks!

*FOOTNOTES*
1.) Some of the guys knew the whole procedure like the back of their hand. Can we say, "Experience?"
2.) Since you are unable to hear me, please be sure to read this next sentence in the most sarcastic manner you can devise.
3.) A facility that uses the training techniques applied to military recruits to teach offenders socially acceptable patterns of behavior.
4.) To include that hollow cavity where hemorrhoids are known to pop up. Or would that be pop out? We'll get to that in a later chapter.

CHAP.#12 PG.#2
* WHAT IT'S LIKE TO BE STRIPPED OF YOUR "EYE"-DENTITY *
Be that as it may, I just don't remember all those "Scare Tactics" \1/ as being all that traumatizing. I mean, what were my fellow prisoners expecting? We were heading to prison! We screwed up in life and we were paying the price for it.
Now let's go beyond all these scare tactic shenanigans and consider the traumatizing episode I experienced -- a truly life-altering calamity indeed.
The time was around 10 A.M. of my second or third at this prisoner's synonym for Parris Island. \2/ The scene was a very crowded waiting room in the medical department, and the mood was downright ugly, as were the nurses. The lengthy wait induced a restless effect on the prisoners awaiting their physicals and the medical staff who had to attend to them all. So by the time my name was called by a nurse , her voice was toneless and wearisome.
After stepping into her office, she told me to have a seat in the chair next to her desk. This middle-aged, homely-shaped nurse had a face that showed just as much emotion as the Terminator's while playing game of poker. I'm quite sure this repetitious procedure, along with the type of individuals she was being made to proceed it with, made for a depressing way to -- make a living.
After placing a few papers in order, and checking to see that the name on the folder matched the on on my I.D. card clipped to my shirt, the multitude of questions began. The questions pertained to every physical concept -- obviously known to man -- from my birth date to the vasectomy I underwent shortly after graduating from college. \3/ It was within this questioning period that I unknowningly set myself up for having to endure an extremely annoying and pride-consuming future for the remainder of my life in the prison system.

Nurse: Do you wear contact lenses?
Me:(Naively answering.) Yes
Nurse:(Putting her hand out with her palm up.) Give them here.
Me:??? (Experiencing a sense of stupidity. While, at the same time, scheduling to have the word -- ASININE -- tattooed across my forehead.)

Before continuing, please allow me to take you back to when I was around 14 years of age, so as to clarify for you the magnitude of what was about to take place. Due to my noticeable inabilities to read certain signs, while everyone around me could, I was faced with those dreadful words expressed by my lovingly concerned mother, "It looks like we're going to have to get you some glasses" Naturally, my first reaction was, OH HELL NO!! \4/ My immediate thoughts obviously would not have been the appropriate response to openly expresses. So after withholding my initial reaction to my mother's suggest, I spent the remainder of the day reviewing my options:
1.) Live a life out focus while not wearing glasses.
2.) Live a life with 20/20 vision while looking like a nerd.
3.) ??? Come on! There had to be an alternative!

*FOOTNOTES*
1.) Scare tactics: The process of giving your victim the impression of a soon-to-be-reality
2.) An island of the Sea islands off southern South Carolina. It has been a U.S Marine Corps. training installation
3.) I've just never really had a thing for kids.
4.) Please notice I didn't include any quotation marks.

CHAP.#12 PG.#3
* WHAT IT'S LIKE TO BE STRIPPED OF YOUR "EYE"-DENTITY *
For those of you who have never worn glasses, but had the opportunity to enjoy an attractive set of braces on your teeth, I'm sure you can somewhat relate with me here. \1/ Except in my case, this wasn't an issue of having to wear some robotic looking teeth-turners that could be easily be hidden by keeping my mouth shut for a couple of years. This was a case of having to wear the nerdiest looking form of vision correctors smack-dab in the center of my face for the remainder of my life, Oh yeah, there had to be an alternative.
After some time of pondering over the problem at hand, the alternative that met my demands appeared in my mind in the form of the words -- CONTACT LENSES. By this point in time, soft contact lenses had become a well known form of INVISIBLE sight correctors. The only problem was they were still substantially higher in price. However, this was my self-esteem we were dealing with here. Right? I figured it was time for me to start handling some of life's financial responsibilities on my own, especially something this important.
The day of my mother's discovery regarding my vision impairment was coming to an end. But I had used the remainder of the day wisely in devising an alternative to the verdict she had un mind. I realize this isn't the type of philosophy one would normally encounter from a 14-year-old boy. But THIS 14-year-old boy wasn't going to wear glasses. In addition, THIS 14-year-old boy was enjoying the lucratihere.ve advantages of a summer break job -- making $180 a week! \2/ With the combination of my egotistical obsession and weekly paycheck as my motivational urge, I decided to go to my parents with this proposition: If they would allow me to get contact lenses, rather than out me through the humiliation of wearing glasses, I would pay the difference between the initial cost of the two and continue to pay for whatever cleaning supplies were necessary in maintaining them. I'm not sure it was the pride they had in seeing their little boy ready to take on such a responsibility, or whether it was just the fact that they both felt sorry for me. Because in all honesty, I don't remember having to put forth one cent toward my new set of contact lenses. And when the optometrists made mention that I should have pair of backup glasses, in case of emergency, I kindly let her know that they wouldn't be necessary.
With all that being said, I certainly hope you've caught on to the fact that the necessity of wearing glasses has always been a major issue with me. Unfortunately, I knew that in this episode my viewpoint would make no difference whatsoever. This was made easy to decipher, not only by the way in which the nurse held he palm open, but also due to the tone of her voice when she said, "Give them here." Also, now that I think about it, her choice of words were pretty much a dead give away as well. To put it simply my analysis of her traits didn't give the impression that when I placed my contacts in her hand she was going to say, "I just want to examine them for you and be sure you're not going to be in need of replacements soon." No! It gave a suspicion that she was going to take them and drop them in the trash can at the other side of her desk.

*FOOTNOTES*
1.) Then, for those of you who have had to endure the hardships of both these humiliating alterations... Well, my heart goes out to you.
2.) Please understand, that was actually pretty good for a teenager 35 years ago.

CHAP.#12 PG.#4
* WHAT IT'S LIKE TO BE STRIPPED OF YOUR "EYE"-DENTITY *
To sit there and witness the trashing of those tiny, harmless, easy to maintain, invisible sight correctors, left me absolutely dumbstruck. And this time I didn't have a summer job to utilize in my favor. Furthermore, it wouldn't be until nine week later that I would receive my glasses.\1/ I supposed it's for this reason that the remainder of the seven weeks I spent at the reception center were.. well, pretty much unclear. (Ahem)
With all that being said, I'm quite sure my portrayal of my stay at the reception center probably doesn't correlate too well with the average prisoner's biography. But as I see it: A bunch of strippers screaming all kinds of obscenities in my face was actually a lot of a demoralizing experience than some homely looking nurse with no assertiveness behind her voice telling me to, "Give them here.")

*FOOTNOTES*
1.)Approximately two weeks after I was transferred to my first prison.