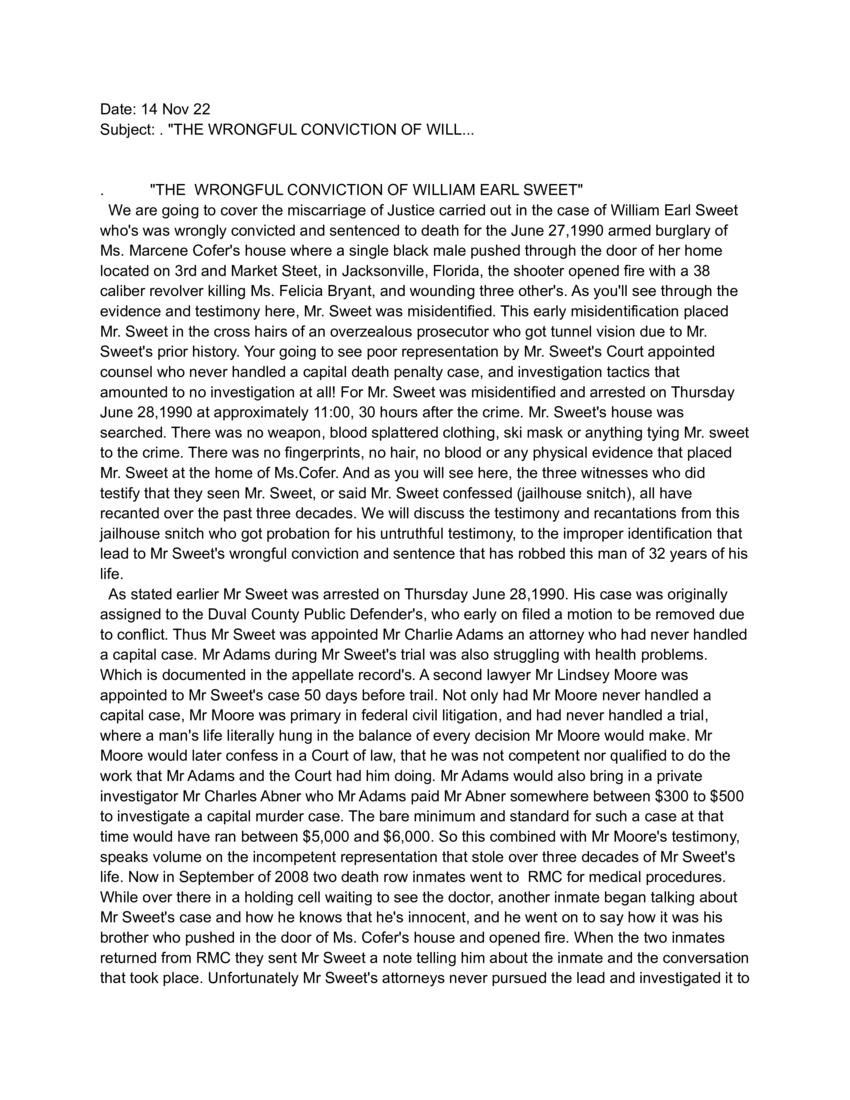 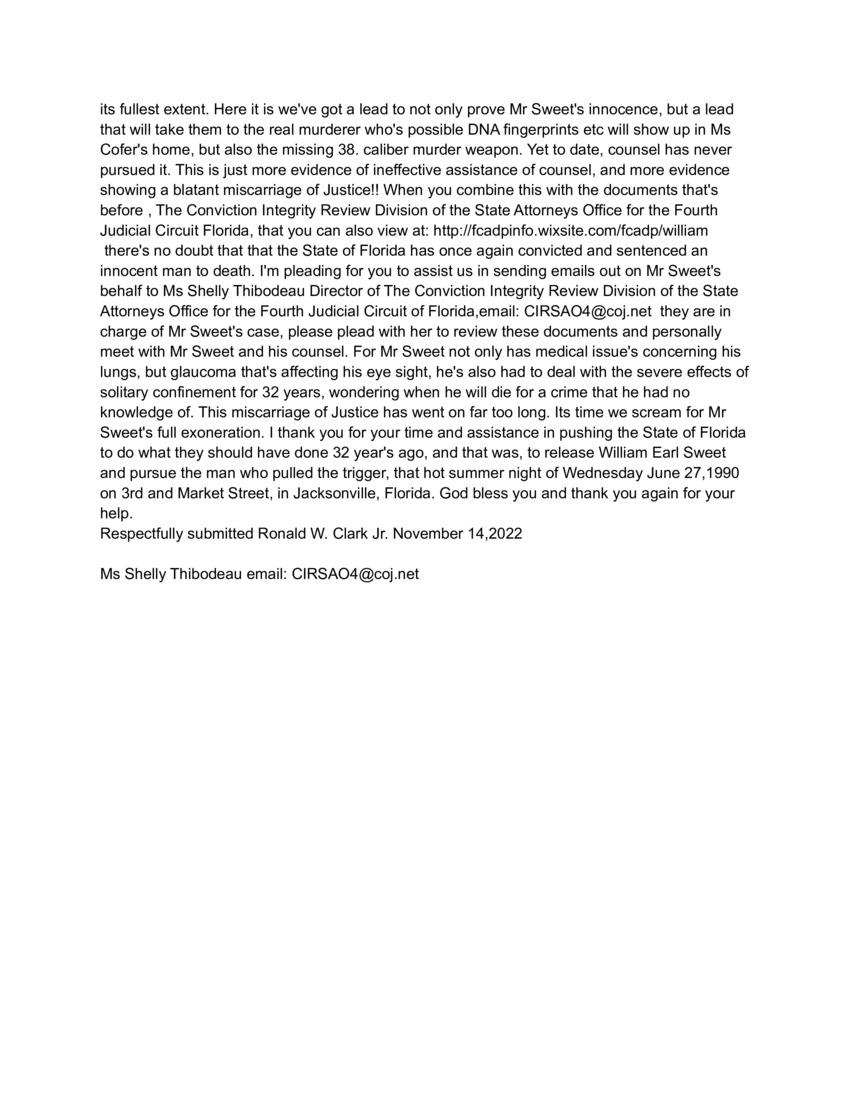 "THE WRONGFUL CONVICTION OF WILLIAM EARLY SWEET"
We are going to cover the miscarriage of Justice carried out in the case of William Earl Sweet who was wrongly convicted and sentenced to death for the June 27, 19990 armed burglary of Ms. Marcene Cofer's house where a single black male pushed through the door of her home located on 3rd and Market Street, in Jacksonville, Florida, the shooter opened fire with a 38 caliber killing Ms. Felicia Bryan, and wounding three others. As you'll see through the evidence and testimony here, Mr. Sweet was misidentified. The early misidentification placed Mr. Sweet in the cross hairs of an overzealous prosecutor who got tunnel vision due to Mr. Sweet's prior history. You're going to see poor representation by Mr. Sweet's Court appointed counsel who never handles a capital death penalty case, and investigation tactics that amounted to no investigation at all! For Mr. Sweet was misidentified and arrested on Thursday June 28, 1990 at approximately 11:00, 30 hours after the crime. Mr. Sweet's house was searched. There was no weapon, blood splattered clothing, ski mask or anything tying Mr. Sweet to the crime. There was no fingerprints, no hair, no blood or any physical evidence that placed Mr. Sweet at the home of Ms. Cofer. And as you will see here, the three witnesses who did testify that they saw Mr. Sweet, or said Mr. Sweet confessed (jailhouse snitch), all have recanted over the past three decades. We will discuss the testimony and recantations from this jailhouse snitch who got probation for his untruthful testimony, to the improper identification that lead to Mr. Sweet's wrongful conviction and sentence that has robbed this man of 32 years of his life.

As stated earlier Mr. Sweet was arrested on Thursday, June 28, 1990. His case was originally assigned to the Duval County Public Defender's, who early on filed a motion to be removed due to conflict. Thus Mr. Sweet was appointed Mr. Charlie Adams an attorney who had never handled a capital case. Mr. Adams during Mr. Sweet's trial was also struggling with health problems. Which is documented in the appellate records. A second lawyer Mr. Lindsey Moore was appointed to Mr. Sweet's case 50 days before trial. Not only had Mr. Moore never handled a capital case, Mr. Moore was primary in federal civil litigation, and had never handled a trial where a man's life literally hung in the balance of every decision Mr. Moore would make. Mr. Moore would later confess in a Court of law that he was not competent nor qualified to do the work that Mr. Adams and the Court had him doing. Mr. Adams would also bring in a private investigator Mr. Charles Abner who Mr. Adams paid Mr. Abner between $300 to $500 to investigate a capital murder case. The bare minimum and standard for such a case at that time would have ran between $5,000 and $6,000. So this combined with Mr. Moore's testimony, speaks volumes on the incompetent representation that stole over three decades of Mr. Sweet's life. Now in September of 2008 two death row inmates went to RMC for medical procedures. While over there in a holding cell waiting to see the doctor, another inmate began talking about Mr. Sweet's case and how he knows that he's innocent, and he went on to say how it was his brother who pushed in the door of Ms. Cofer's house and opened fire. When the two inmates returned from RMC they sent Mr. Sweet a note telling him about the inmate and the conversations that took place. Unfortunately Mr. Sweet's attorneys never pursued the lead and investigated it to its fullest extent. Here is what we've got a lead to not only prove Mr. Sweet's innocence, but a lead that will take them to the real murderer whose possible DNA fingerprints etc. will show up in Ms. Cofer's home, but also the missing 38 caliber murder weapon. Yet to date, counsel has never pursued it. This is just more evidence of ineffective assistance of counsel, and more evidence showing a blatant miscarriage of Justice! When you combine this with the documents that's before The Conviction Integrity Review Decision of the State Attorney's Office for the Fourth Judicial Circuit Florida, that you can also view at: http://fcadpinfo.wixsite.com/fcadp/william, there's no doubt that the State of Florida has once again convicted and sentenced an innocent man to death. I'm pleading for you to assist us in sending emails out on Mr. Sweet's behalf to Shelly Thibodeau Director of the Conviction Integrity Review Division of the State Attorney's Office for the Fourth Judicial Circuit of Florida, email CIRSAO4@coj.net. They are in charge of Mr. Sweet's case, please plead with her to review these documents and personally meet with Mr, Sweet and his counsel. For Nr. Sweet not only has medical issues concerning his ,lungs, but glaucoma that's affecting his eye sight, he's also had to deal with the severe effects of solitary confinement for 32 years, wondering when he will die for a crime that he had no knowledge of. This miscarriage of Justice has went on far too long. It's time we scream for Mr. Sweet's full exoneration. I thank you for your time and assistance in pushing the State of Florida to do what they should have done 32 years ago, and that was, to release William Earl Sweet and pursue the man who pulled the trigger that hot summer night of Wednesday June 27, 1990 on 3rd and Market Street , in Jacksonville, Florida. God bless you and thank you again for your help.