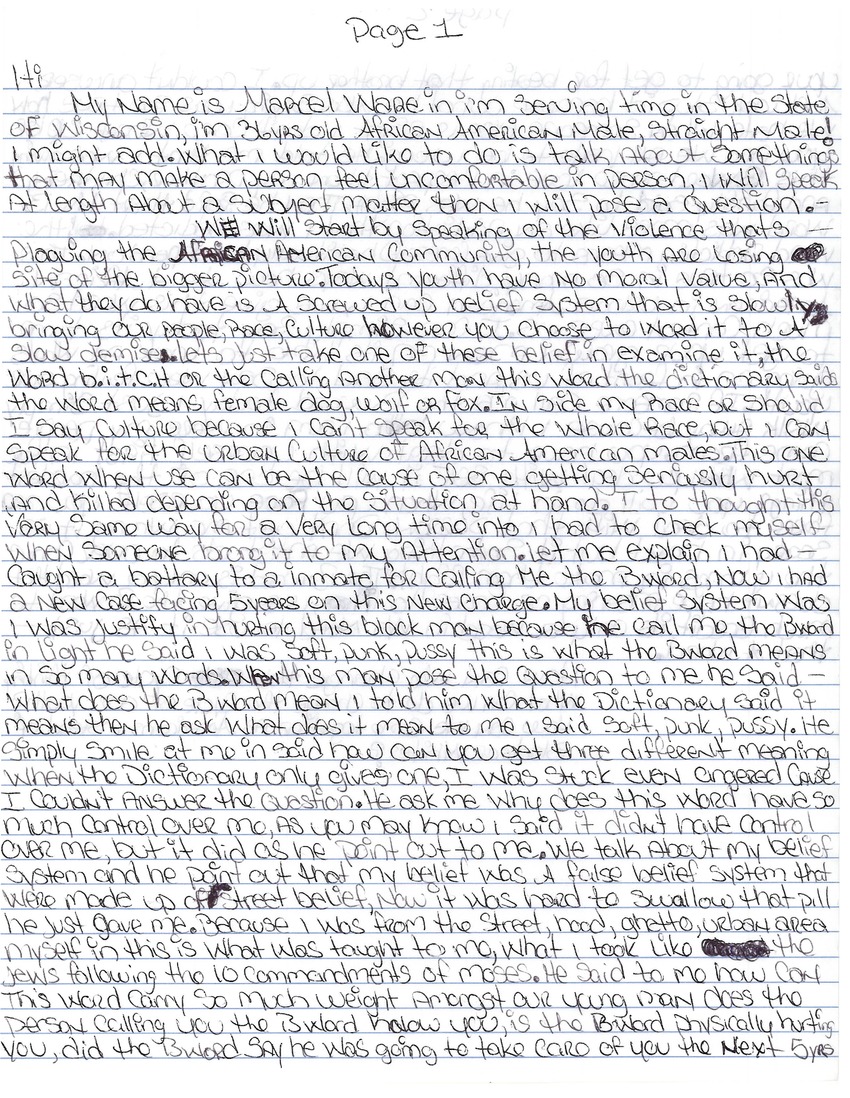 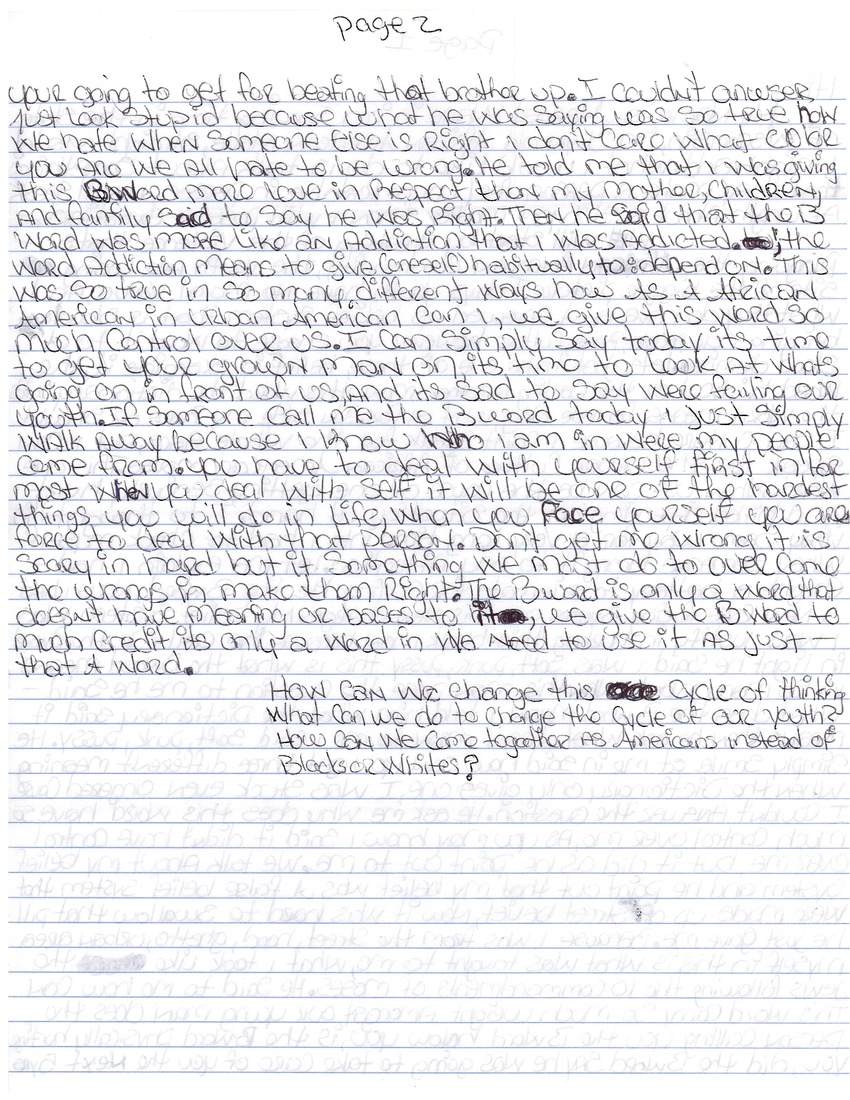 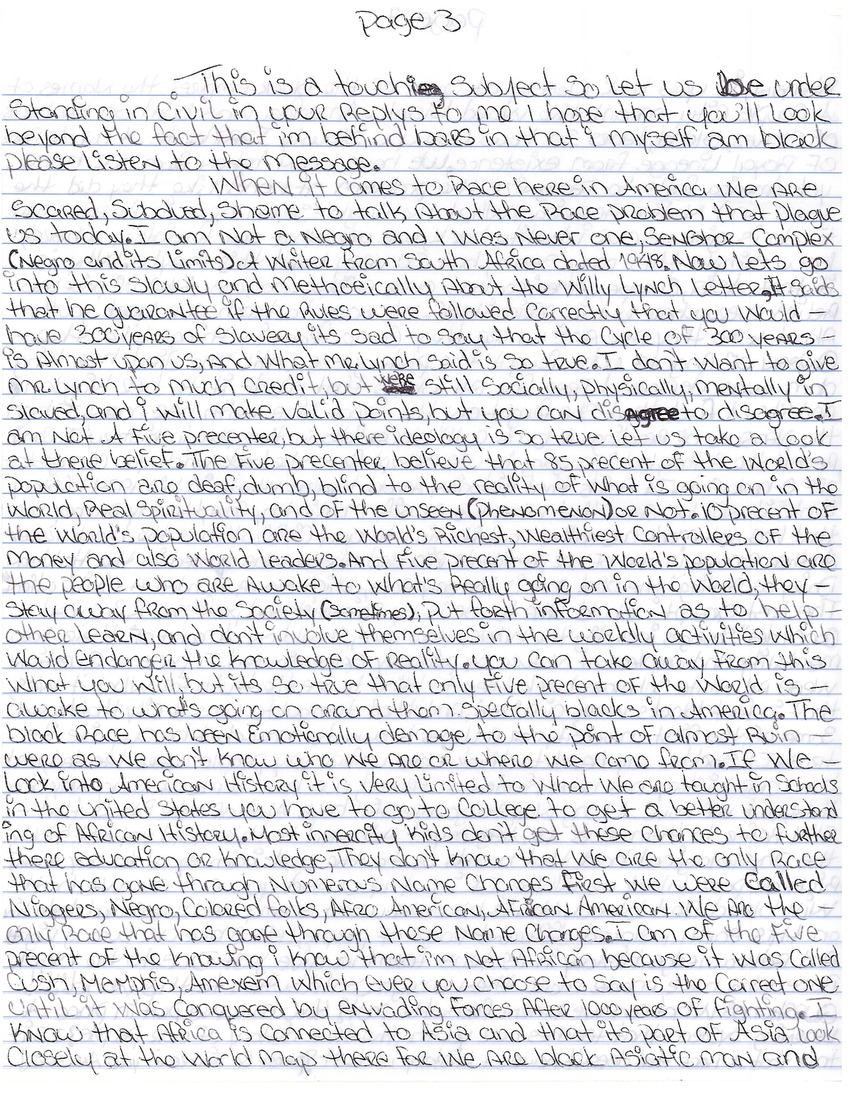 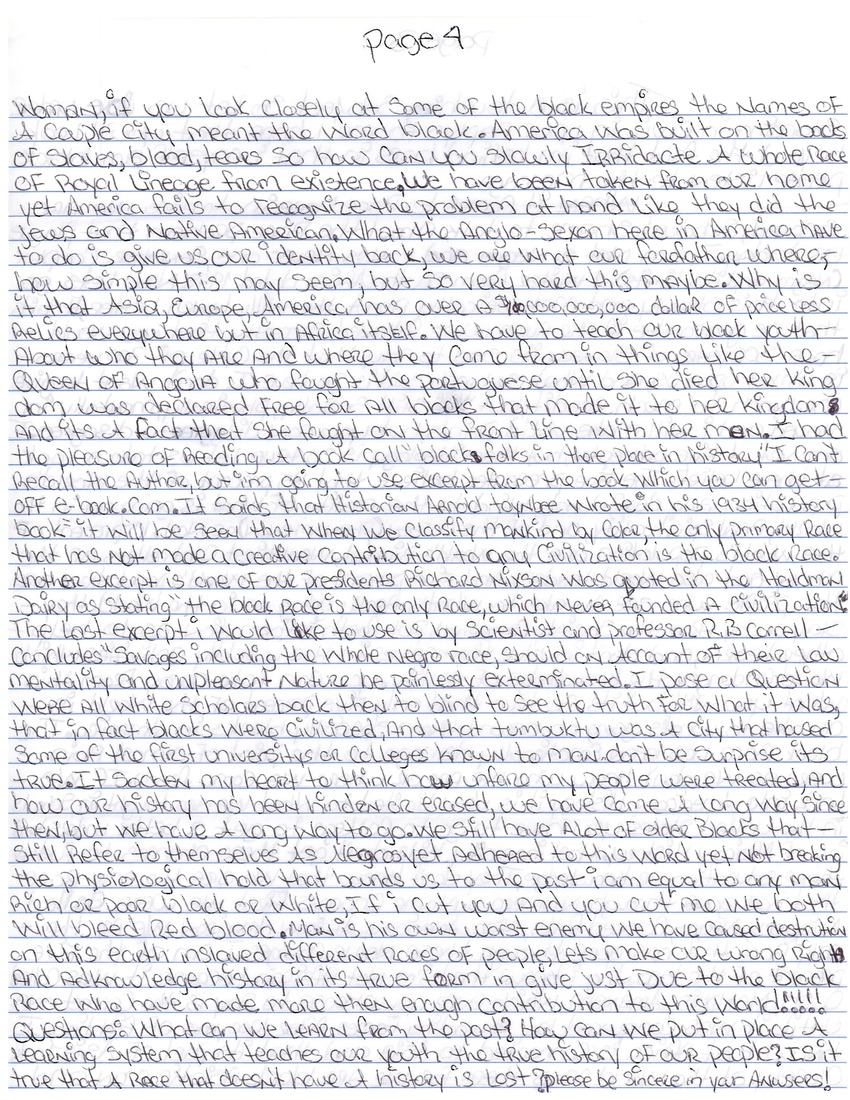 My name is Marcel Ware and I'm serving time in the state of Wisconsin. I'm a 36 year old African-American male, straight male I might add. What I would like to do is talk about something that may make a person feel uncomfortable in person. I will speak at length about a subject matter then I will post a question -

We will start by speaking of the violence that's plaguing the African-American community. The youth are losing sight of the bigger picture. Today's youth have no moral value, and what they do have is a screwed up belief system that is slowly bringing our people, race, culture - however you choose to word it - to a slow demise. Let's just take one of these beliefs and examine it: the word "bitch," or calling another man this word. The dictionary says the word means female dog, wolf, or fox. Inside my race, or should I say culture, because I can't speak for the whole race, but I can speak for the urban culture of African-American males. This one word, when used, can be the cause of one getting seriously hurt and killed, depending on the situation at hand.

I too thought this very same way for a very long time, until I had to check myself when someone brought it to my attention. Let me explain: I caught a battery to an inmate for calling me the "b word," now I had a new case facing 5 years on this new charge. My belief system said I was justified in hurting this black man because he called me the "b word." He said I was soft, punk, pussy - that's what the "b word" means. When this man posed the question to me he said - what does the "b word" mean? I told him what the dictionary said it meant. Then he asked me what it meant to me. I said "soft, punk, pussy." He simply smiled at me and said "how can you get three different meanings when the dictionary only gives one?" I was struck, even angered, because I couldn't answer the question. He asked me why the word had so much control over me. I said it didn't, but it did. We talked about my belief system, and he pointed out that it was false, made up of "street" beliefs. Now it was hard to swallow that pill because I am from the street, hood, ghetto, and this is what I was taught. I took it like the Jews following the 10 Commandments of Moses. He asked, "how can this word carry so much weight amongst our young men? Does the person calling you the 'b-word' know you? Is the word physically hurting you? Did it say it was going to take care of you for the next 5 years you're going to get for beating that brother up?" I couldn't answer. Just looked stupid because what he was saying was so true.

How we hate when someone else is right! I don't care what color you are, we all hate to be wrong. He told me that I was giving this word more love and respect than my mother, children, and family. Sad to say he was right. Then he said that word was more like an addiction. I was addicted. The word addiction means to give (oneself) habitually, to depend on. This was so true in so many different ways. How as urban African-Americans can we give this word so much control over us? I can simply say today it's time to get your grown man on, it's time to look at what's going on in front of us, and it's sad to say we're failing our youth. If someone called me the "b-word" today, I just simply walk away because I know who I am and where I come from. You have to deal with yourself first and foremost. When you deal with SELF it will be one of the hardest things you will do in your life. When you face yourself you are forced to deal with that person. Don't get me wrong, it is scary and hard but it is something we must do to overcome the wrongs and make them right. The "b-word" is only a word. It doesn't have meaning or basis to it. We give it too much credit. It's only a word and we need to use it as just that - a word.

How can we change this cycle of thinking? What can we do to change the cycle of our youth? How can we come together as Americans instead of Blacks or Whites?

This is a touchy subject, so let's be understanding and civil in your replies. I hope that you'll look beyond the fact that I'm behind bars and that I myself am black. Please listen to the message.

When it comes to Race here in America we are scared, subdued, ashamed to talk about the race problem that plagues us today.

Now let's go into this slowly and methodically. In the Willy Lynch letter, he guarantees that if the rules were followed correctly that you would have 300 years of slavery. It's sad to say that the Cycle of 300 years is almost upon us, and what Mr. Lynch said is true. I don't want to give him too much credit, but we're still socially, physically, and mentally enslaved. I am not a " Five Percenter," but their ideology is true. Let's take a look at their belief.

The Five Percenters believe that 85% of the world's population is deaf, dumb, and blind to the reality of what's going on in the world. Real Spirituality, and of the unseen (phenomenon) or not. 10% of the world's population are the world's richest, wealthiest controllers of the money and also world leaders. And 5% of the world's population are the people who are awake to what's really going on. They sometimes stay away from society, put forth information to help, others learn, and don't want to involve themselves in the worldly activities which would endanger the knowledge of reality. You can take from this what you will, but it's so true that only 5% of the world is awake to what's going on around them. Especially blacks in America. The Black race has been emotionally damaged, to the point of almost ruin. As if we don't know who we are or where we come from. If we look into American History as taught in schools it's very limited. You have to go to college to get a better understanding of African History. Most inner-city kids don't get these chances to further their education or knowledge. They don't know that we are the only race that has gone through numerous name changes. First we were called "Niggers", "Negro", "Colored Folks", "Afro-American", "African-American." We are the only race that has gone through these name changes.

I am of the five percent. I know that I'm not African because it was called Cush, Memphis, Amexem - until it was conquered by invading forces after 1000 years of fighting. I know that Africa is connected to Asia. Look closely at the world map. Therefore we are black Asiatic men and women. If you look closely at some of the black empires, the names of a couple of cities meant the word "black."

America was built on the backs of slaves, blood and tears. So how can you slowly eradicate a whole race of royal lineage? We were taken from our home, yet America fails to recognize the problem. The same thing happened to the Jews and Native Americans. The American Anglo-Saxons have to give us our identity back. We are what our forefathers were. This may seem simple, but is so very hard.

Why is it that Asia, Europe, and America have over $100,000,000 of priceless relics everywhere but not Africa? We have to teach our Black youth about who they are and where they come from. Things like the Queen of Angola, who fought the Portuguese until she died. Her kingdom was declared free for all blacks that made it there. And she fought on the front lines with her men. I had the pleasure of reading a book called BLACK FOLKS AND THEIR PLACE IN HISTORY. I can't recall the author, but I'm going to use an excerpt from the book which you can get at e-book.com.

It says that historian Arnold Toynbee wrote in his 1934 history book "it will be seen that when we classify mankind by color, the only primary race that has not made a creative contribution to any civilization is the black race." Another excerpt, from former president Richard Nixon as quoted from the Haldeman Diaries, "the black race is the only race which never founded a civilization." The last excerpt I would like to use is by scientist and professor R.B. Cornell, "savages, including the whole Negro race, should on account of their low mentality and unpleasant nature be painlessly exterminated."

I pose a question - were all white scholars back then too blind to see that Timbuktu was a city that housed some of the first universities or colleges known to man? Don't be surprised, it's true. It saddens my heart to think how unfair my people were treated, and how our history has been hidden or erased. We have come a long way since then, and we have a long way to go. We still have a lot of older Blacks that refer to themselves as "Negroes", adhering to the word and not breaking the pyschological hold that binds us to the past. I am equal to any man - rich or poor, black or white. If I cut you and you cut me, we both bleed red blood.

Man is his own worst enemy. We have caused destruction on this earth and enslaved different races of people. Let's make our wrongs right, acknowledge history in its true form, and give just due to the black race who've made more than enough contributions to this world!!!

Questions: What can we learn from the past? How can we put in place a learning system that teaches our youth the true history of our people? Is is true that a race that doesn't have a history is lost? Please be sincere in your answers!