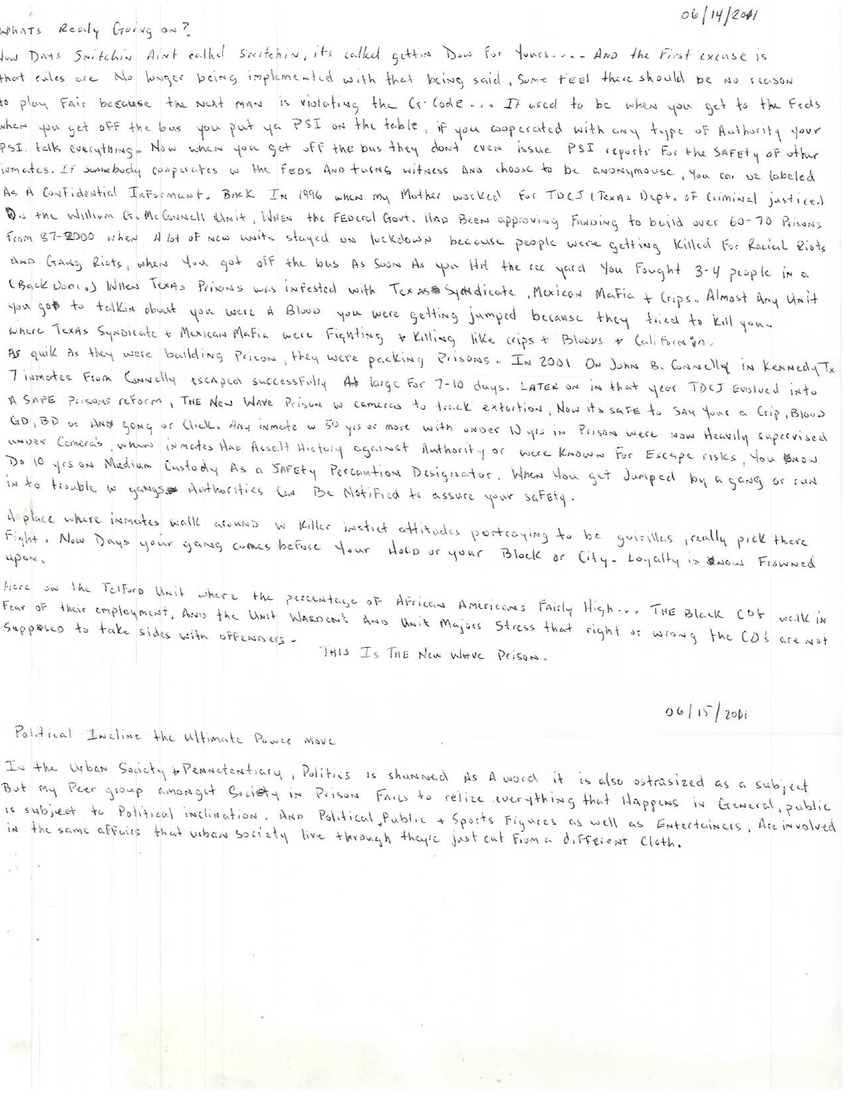 What's Really Going On?
Nowadays snitchin ain't called snitchin, it's called Down For Yours... and the first excuse is that rules are no longer being implemented with that being said, some feel there should be no reason to play fair because the next man is violating the CR- code... It used to be when you get to the feds when you get off the bus you put ya PSI on the table, if you cooperated with any time of authority your PSI talks everything. Now when you get off the bus they don't even issue PSI reports for the safety of other inmates. If somebody cooperates w the feds and turning witness and chooses to be anonymous, you can be labeled as a confidential informant. Back in 1996 when my mother worked for TDCJ (Texas Dept. of Criminal Justice.) Do the William (t. McConnell Unit, When the federal Govt. had been approving funding to build over 60-70 prisons from 87-2000 when a lot of new units stayed on lockdown because people were getting killed for racial riots and gang riots when you got off the bus as soon as you hit the rec yard you fought 3-4 people in a (backdoor.) When Texas prisons were infested with Texas syndicate, Mexican mafia & crips. Almost any unit you got to talking about you were a Blood you were getting jumped because they tried to kill you. Where Texas syndicate & the Mexican mafia were fighting & killing like crips & Bloods & Californians.
As quickly as they were building prisons, they were packing prisons. In 2001 OH John B. Connelly in Kennedy Tx, 7 inmates from Connelly escaped successfully at large for 7-10 days. Later on, in that year TDCJ evolved into safe prison reform, the new wave prison w cameras to track extortion. Now it's safe to say you're a crip, Blood GD, BD, or any gang or clique. Any inmate w 50 yrs or more under 12 yrs in prison were now heavily supervised under cameras when inmates had assault history against authority or were known for escape risks, you know do 10 yrs on medium custody as a safety precaution designator. When you get jumped by a gang or run into trouble in gangs, authorities can be notified to assure your safety.

A place where inmates walk around w killer instinct attitudes portraying to be gorillas, really pick their fight. Nowadays your gang comes before your hold or your block or city. Loyalty is frowned upon.

Here in the Telford Unit where the percentage of African Americans fairly high... the black CO walk in fear of their employment, and the unit warden and unit majors stress that right or wrong the COs are not supposed to take sides with offenders.
THIS IS THE NEW WAVE PRISON.
06/15/2011

Political Incline the Ultimate Power Move
In the urban society & penitentiary, politics is shunned as a word it is also ostracized as a subject but my peer group amongst society in prison fails to realize everything that happens in general, the public is subject to political inclination. And political public & sports figures as well as entertainers, are involved in the same affairs that urban society lives through they're just cut from a different cloth.