Fighting the Frame Behind Bars 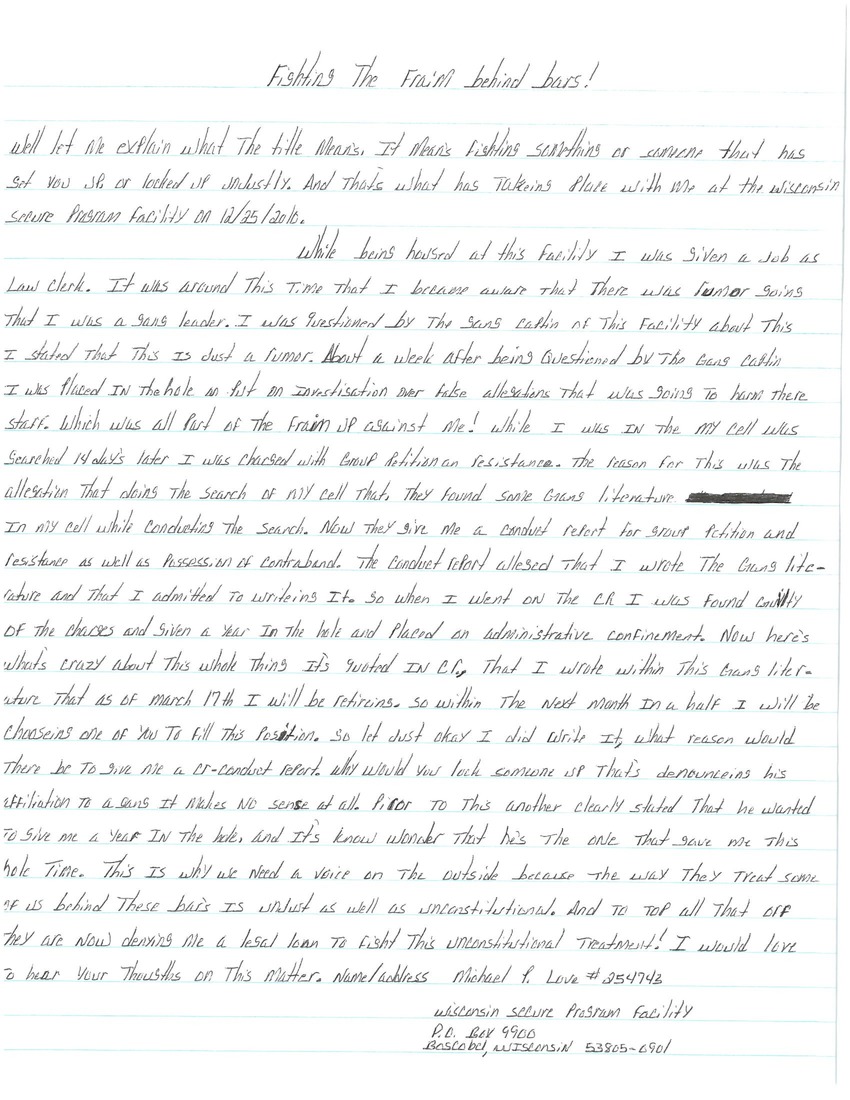 Fighting the Frame behind bars!

Well let me explain what the title means. It means fighting something or someone that has set you up, or locked up unjustly. And that's what has taken place with me at the Wisconsin Secure Program Facility on 12/25/2010.
While being housed at this facility I was given a job as law clerk. It was around this time that I became aware that there was rumor going that I was a gang leader. I was questioned by the gang captain of the facility about this I stated that this is just a rumor. About a week after being questioned by the gang captain I was placed in the hole on put on investigation over false allegations that was going to harm their staff. Which was all part of the frame up against me! While I was in the my cell was searched 14 days later I was charged with group retaliation and resistance. The reason for this was the allegation that doing the search of my cell that they found some gang literature in my cell while conducting the search. Now they give me a conduct report for group petition and resistance as well as possession of contraband. The conduct report alleged that I wrote the gang literature and that I admitted to writing it. So when I went on the CR I was found guilty of the charges and given a year in the whole and placed on administrative confinement. Now here's what's crazy about this whole thing it's quoted in C.R., that I wrote within this gang literature that as of March 17th I will be retiring. So within the next month in a half I will be choosing one of you to fill the position. So let just okay I did write it, what reason would there be to give me a CR - conduct record. Why would you lock someone up that's denouncing his affiliation to a gang it makes no sense at all. Prior to this another clearly stated that he wanted to give me a year in the hole, and it's no wonder that he's the one that gave me this hole time. This is why we need a voice on the outside because the way they treat some of us behind these bars is unjust as well as unconstitutional treatment! I would love to hear your thoughts on this matter. Name/address Michael P. Love #254743
P.O. Box 9900
Boscobel, Wisconsin 53805-0901