The Different Prisons In Missouri 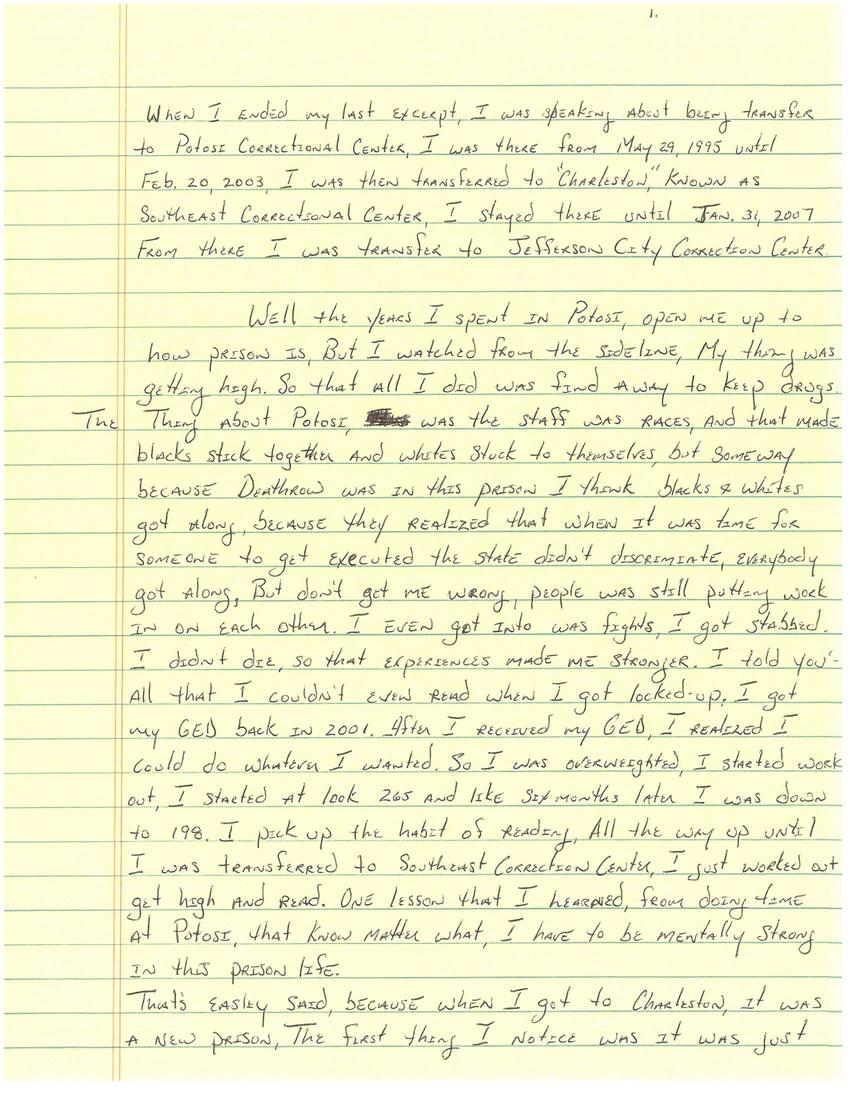 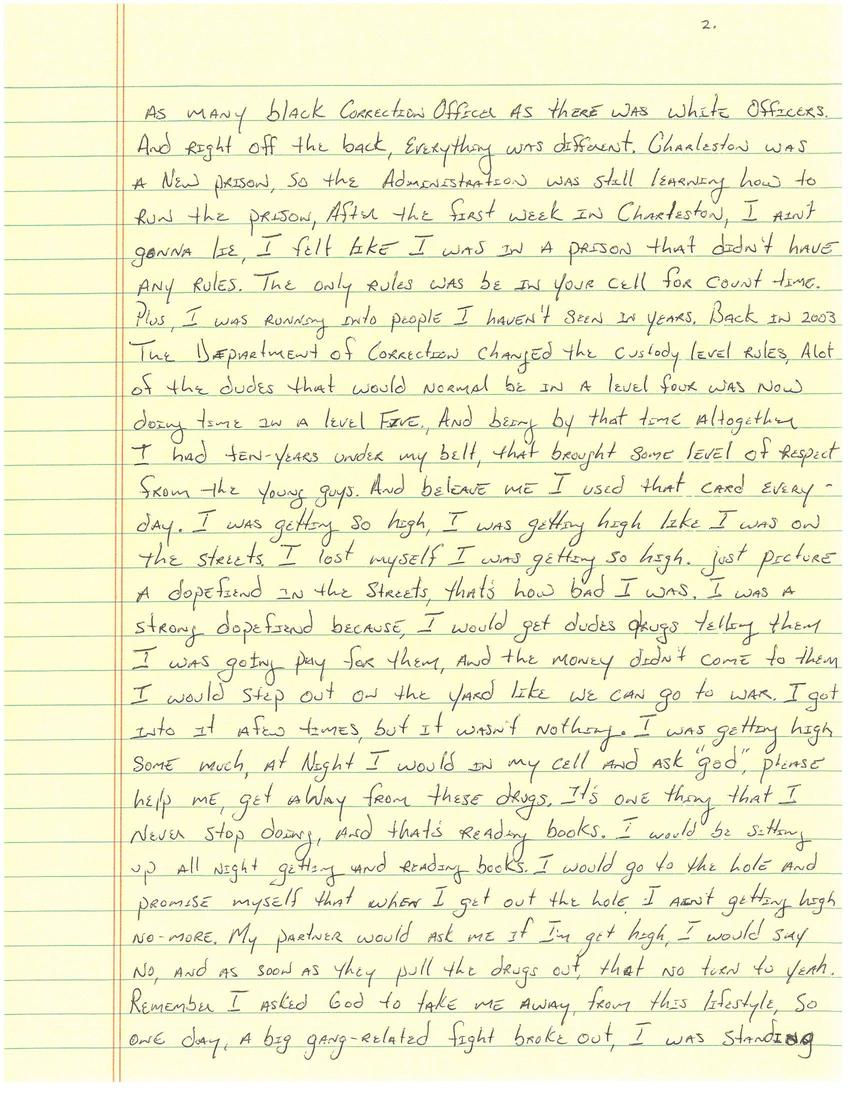 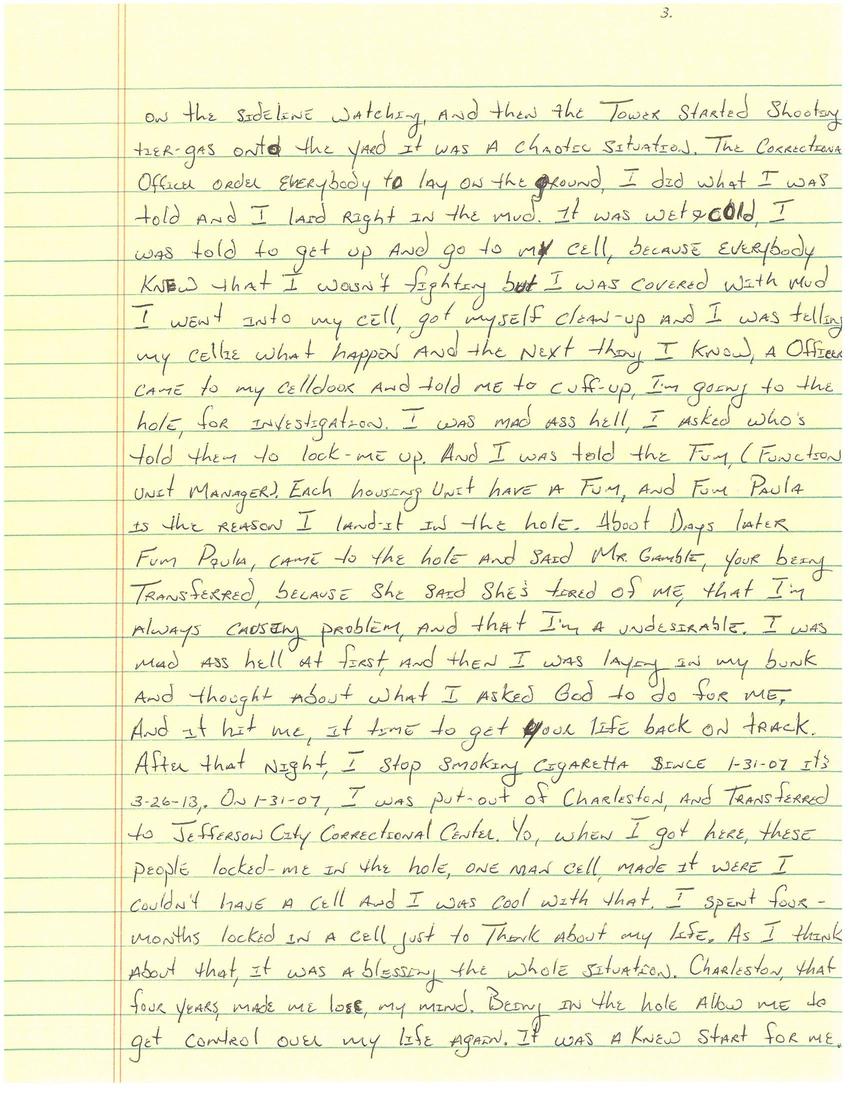 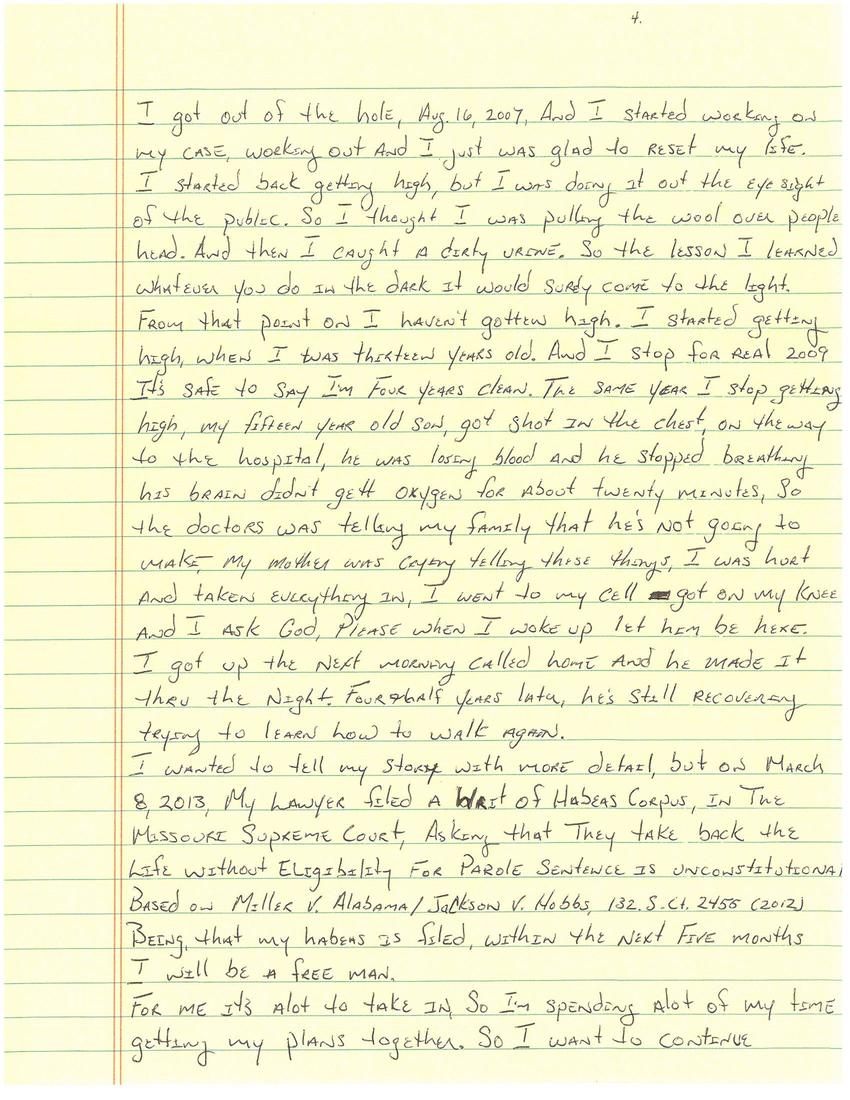 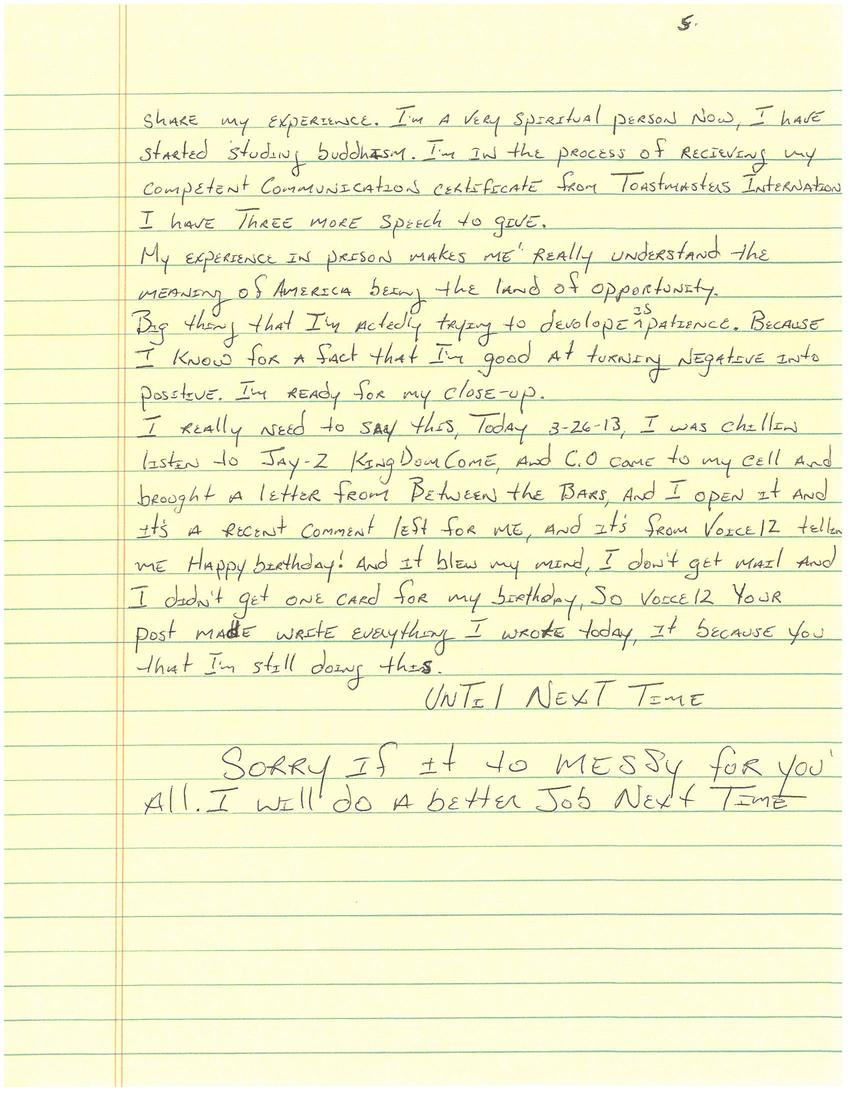 Well, the years I spent in Potosi, opened me up to how prison is, but I watched from the sideline, my thing was getting high. So that all I did was find a way to keep drugs. The thing about Potosi, was the staff was racist, and that made the Blacks stick together and Whites stick to to themselves, but somehow because Death Row was in this prison I think Blacks and Whites got along, because they realised that when it was time for someone to get executed the state didn't discriminate, everybody got along. But don't get me wrong, people were still putting work in on each other. I even got into fights, I got stabbed. I didn't die, so that experience made me stronger. I told you all that I couldn't even read when I got locked-up, I got my GED Back in 2001. After I received my GED, I realised I could do whatever I wanted. So I was overweight, I started to work-out, I started at about 265 and like six months later I was down to 198. I picked up the habit of reading, all the way up until I was transferred to Southeast Correction Center, I just worked out, got high and read. One lesson that I learned, from doing time at Potosi, that no matter what, I have to be mentally strong in this prison life.

That's easily said, because when I got to Charleston, it was a new prison. The first thing I noticed was there were just as many Black correction officers as there were white officers. And right off the bat, everything was different. Charleston was a new prison, so the administration was still learning how to run the prison. After the first week in Charleston, I ain't gonna lie, I felt like I was in a prison that didn't have any rules. The only rules were to be in your cell for count time. Plus, I was running into people I hadn't seen in years. Back in 2003 the Department of Correction changed the custody level rules, a lot of the dudes that would normally be in a level four were now doing time in a level five. And being by that time altogether I had ten years under my belt, that brought some level of respect from the young guys. And believe me I used that card everyday. I was getting so high, I was getting high like I was on the streets. I lost myself I was getting so high, just picture a dopefiend on the streets, that's how bad I was. I was a strong dopefiend because, I would get the dudes drugs telling them I was going to pay for them, and the money didn't come to them I would step out on the yard like we can go to war. I got into it a few times, but it wasn't nothing. I was getting high so much, at night I would sit in my cell and ask "God," please help me get away from these drugs. There's one thing that I never stopped doing, and that's reading books. I would be sitting up all night getting and reading books. I would go to the hole and promise myself that when I got out of the hole I ain't getting high no more. My partner would ask me if I'ma get high. I would say no, and as soon as they pulled the drugs out, that no turned to yeah. Remember I asked God to take me away from this lifestyle. So one day, a big gang-related fight broke out. I was standing on the sideline watching, and then the tower started shooting tear-gas into the yard, it was a chaotic situation. The Correctional Officer ordered everybody to lay on the ground. I did what I was told and I laid right in the mud. It was wet and cold, I was told to get up and go to my cell, because everybody knew that I wasn't fighting, but I was covered with mud. I went into my cell, got myself cleaned-up and I was telling my cellie what happened and the next thing I know, an officer came to my celldoor and told me to cuff-up. I'm going to the hole for investigation. I was mad as hell, I asked who's told them to lock me up. And I was told the FUM (Function Unit Manager). Each housing unit has a FUM, and FUM Paula is the reason I landed it in the hole. About days later FUM Paula, came to the hole and said Mr. Gamble, you're being transferred, because she said she's tried of me, that I'm always causing problems and that I'm an undesirable. I was mad as hell at first, and then I was laying in my bunk and thought about what I asked God to do for me. And it hit me, it's time to get your life back on track. After that night, I stopped smoking cigarettes since 1-31-07 it's 3-26-13. On 1-31-07 I was put out of Charleston and transferred to Jefferson City Correctional Center. Yo, when I got here, these people locked me in the hole, one man cell, made it where I couldn't have a cell and I was cool with that. I spent four months locked in a cell just to think about my life. As I think about that, it was a blessing the whole situation. Charleston, that four years, made me lose my mind. Being in the hole allowed me to get control over my life again. It was a new start for me.

I got out of the hole Aug. 16, 2007. And I started working on my case, working-out and I just was glad to reset my life. I started back getting high, but I was doing it out the eyesight of the public. So I thought I was pulling the wool over peoples' eyes. And then I caught a dirty urine. So the lesson I learned was that whatever you do in the dark it would surely come to the light. From that point on I haven't gotten high. I started getting high when I was thirteen years old. And I stopped for real in 2009. It's safe to say I'm four years clean. The same year I stopped getting high, my fifteen year old son got shot in the chest, on the way to the hospital, he was losing blood and stopped breathing - his brain didn't get oxygen for about twenty minutes, so the doctors were telling my family that he's not going to make it. My mother was crying telling me these things, I was hurt and taking everything in, I went to my cell, got on my knees and I asked God, please when I woke up to let him be here. I got up the next morning, called home and he made it through the night. Four and a half years later he's still recovering, trying to learn how to walk again.

I wanted to tell my story with more detail, but on March 8, 2013, my lawyer filed a Writ of Habeas Corpus in the Missouri Supreme Court, asking that they take back the Life without Eligibility for Parole sentence. It's unconstitutional based on Miller v. Alabama/Jackson v. Hobbs, 132. s. ct. 2456 (2012), being that my Habeus is filed, within the next five months I will be a free man.

For me it's a lot to take in, so I'm spending a lot of my time getting my plans together. So I want to continue sharing my experience. I'm a very spiritual person now, I have starting studying Buddhism. I'm in the process of receiving my Competent Communications certificate from Toastmasters International. I have three more speeches to give.

My experience in prison makes me really understand the meaning of America being the land of opportunity. Big thing that I'm actually trying to develop is patience. Because I know for a fact that I'm good at turning negative into positive. I'm ready for my close-up.

I really need to say this, today 3-26-13, I was chillin' listening to Jay-Z Kingdom Come, and CO came to my cell and brought a letter from BetweentheBars, and I opened it was it's a recent comment left for me, and it's from Voice 12 telling me happy birthday! And it blew my mind, I don't get mail and I didn't get one card for my birthday, so Voice12 your post made me write everything I wrote today, it's because of you that I'm still doing this.

Sorry if it's too messy for you all, I will do a better job next time.

This was a really great read and I hope you had a good birthday. I am in high school right now and it is humbling to read about how tough life can be sometimes, I wish you the best of luck once you get out, are you planning work anywhere in particular? Maybe go to community college?
Trevin, I'm so glad my comment got to you! I know I'll never meet you, but I'm glad that we could "meet" through this blog. It is interesting to read more about your journey through the various prisons. I'm glad you picked up the habit of reading - I wish I had picked it up sooner! Thanks for continuing to share your story.
(scanned reply – view as blog post)
uploaded May 14, 2013.  Original (PDF) 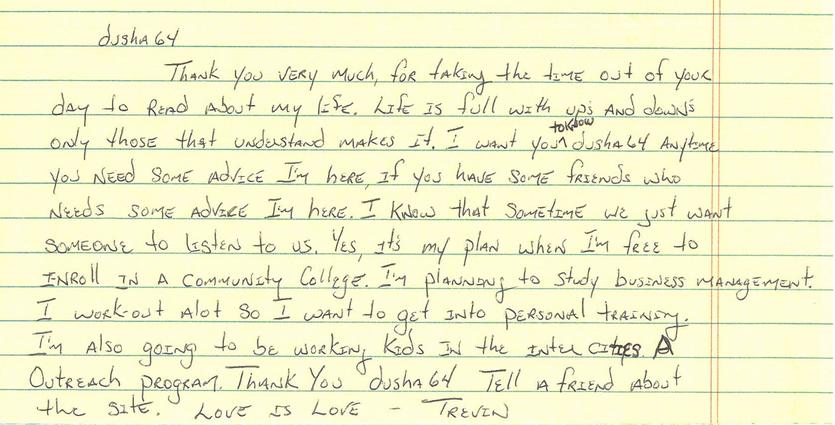 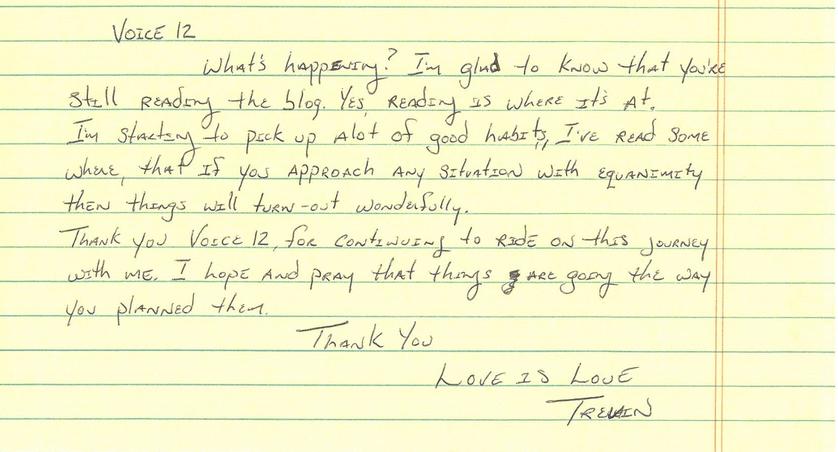 Wow! This was a great story. Thank you for sharing. I will share it with my Facebook Group called, "Missouri and Kansas Prisoner or Inmate Support group.