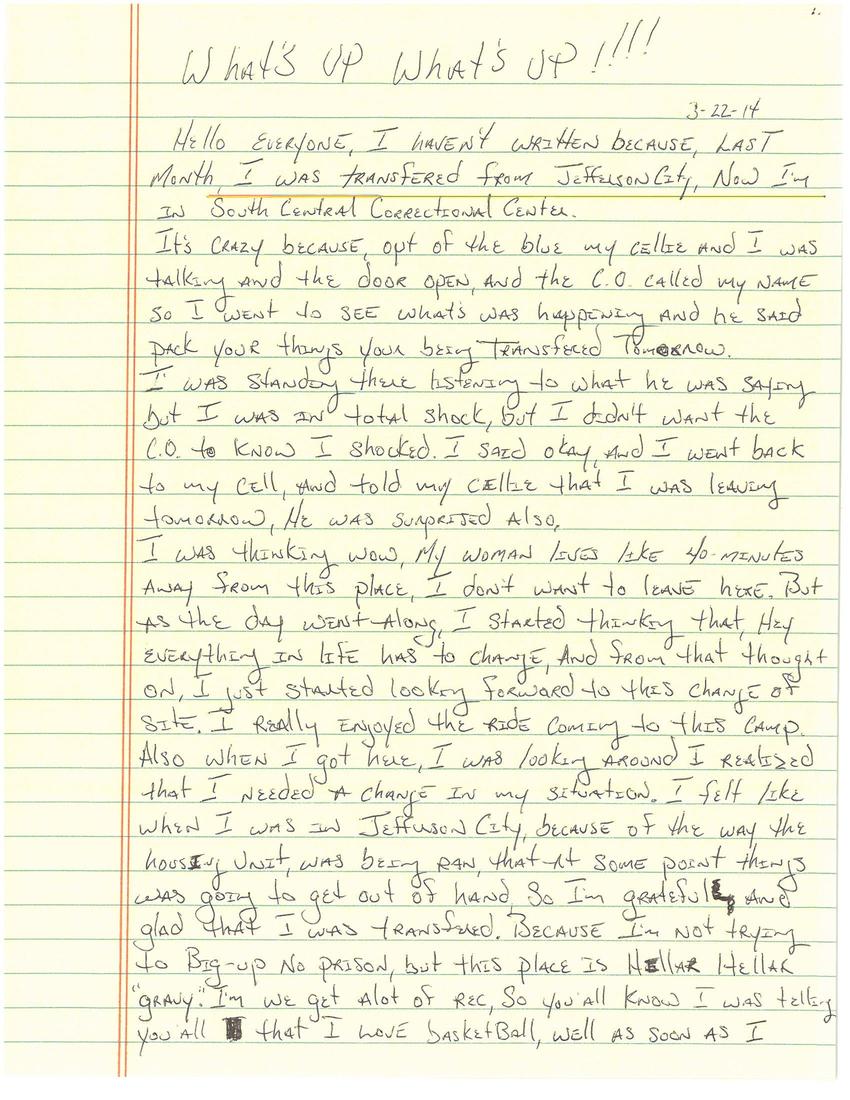 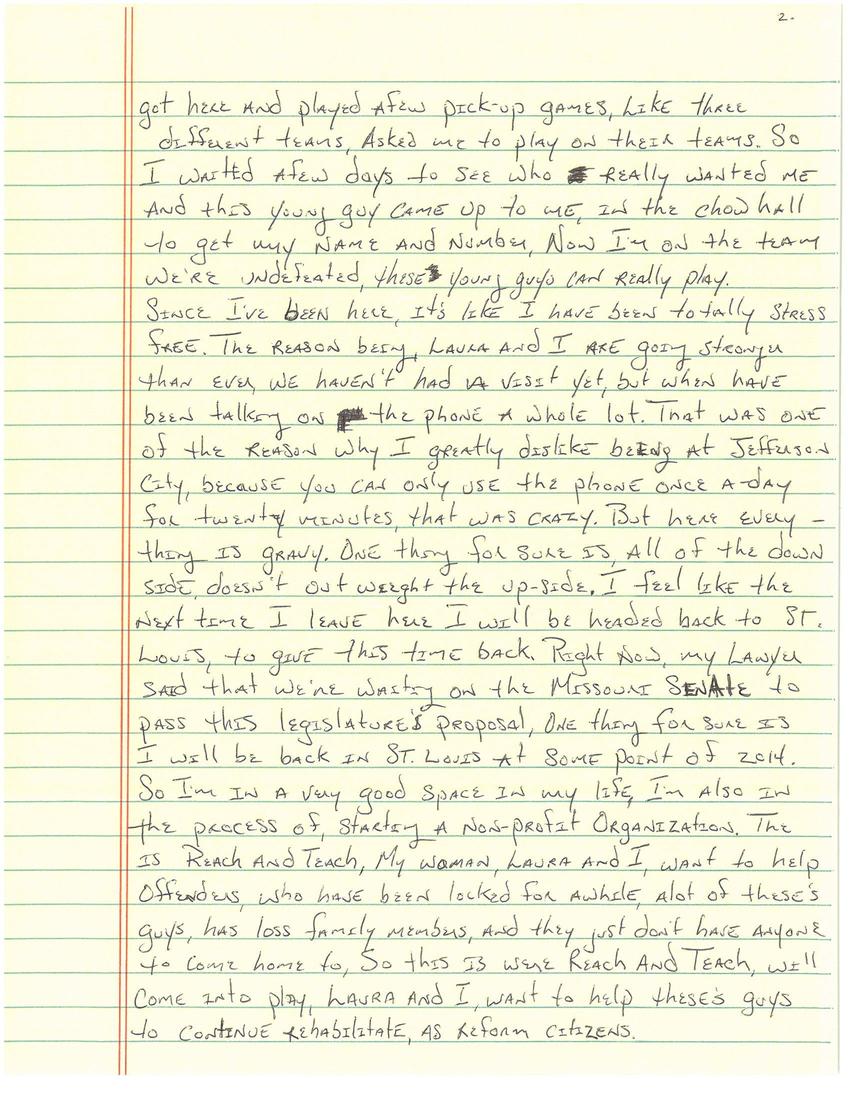 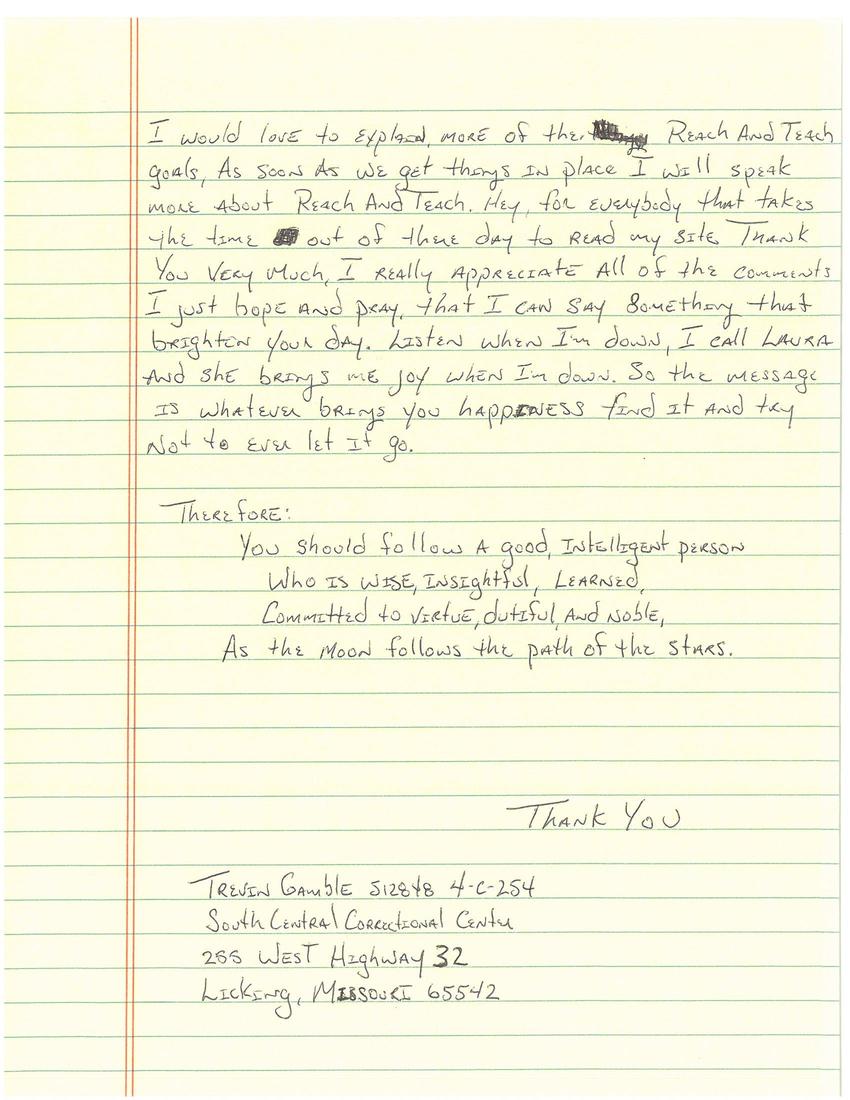 Hello, everyone. I haven't written because last month I was transferred from Jefferson City. Now I'm in South Central Correctional Center.

It's crazy because, out of the blue, my cellie and I were talking and the door opens, and the CO called my name so I went to see what was happening, and he said, "Pack your things. You're being transferred tomorrow." I was standing there listening to what he was saying, but I was in total shock. But I didn't want the CO to know I was shocked. I said, "Okay." And I went back to my cell and told my cellie that I was leaving tomorrow. He was surprised too.

I was thinking, "Wow. My woman lives like forty minutes away from this place. I don't want to leave here." But as the day went along, I started thinking that, "Hey, everything in life has to change." And from that thought on, I really enjoyed the ride coming to this camp. Also, when I got here, I was looking around and I realized that I needed a change in my situation. I felt like when I was in Jefferson City because of the way the housing unit was being ran. That, at some point, things were going to get out of hand.

So I'm grateful and glad that I was transferred. Because I'm not trying to big-up no prison, but this place is hella, hella "gravy". I'm we get a lot of Rec, so y'all know I was telling you all that I have basketball. Well, as soon as I got here and played a few pick-up games, like three different teams asked me to play on their teams. So I waited a few days to see who really wanted me, and this young guy came up to me in the chow hall to get my name and number. Now I'm on the team. We're undefeated. These young guys can really play.

Since I've been here, it's like I have been totally stress-free. The reason being, Laura and I are going stronger than ever. We haven't had a visit yet, but we've been talking on the phone a whole lot. That was one of the reasons why I greatly disliked being at Jefferson City because you can only use the phone once a day for twenty minutes. That was crazy. But here, everything is gravy.

One thing for sure is, all of the downsides don't outweigh the upsides. I feel like the next time I leave here, we'll be headed back to St. Louis to give this time back. Right now, my lawyer said that we're waiting on the Missouri senate to pass this legislature's proposal. One thing for sure is I will be back in St. Louis at some point in 2014 in the process of starting a non-profit organization that is called Reach and Teach.

Hey, for everybody who takes the time out of their day to read my site, thank you very much. I really appreciate all of the comments. I just hope and pray that I can say something that brightens your day. Listen, when I'm down, I call Laura and she brings me joy when I'm down. So the message is whatever brings you happiness, find it and try not to ever let it go.

Therefore:
You should follow a good, intelligent person who is wise, insightful, learned, committed to virtue, dutiful, and noble, as the moon follows the path of the stars.

Trevin, my son is in jail awaiting preliminary hearing for 3 class A felonies. I discovered your site and am fascinated with your story. You have encouraged me. I pray he will meet someone like you when the time comes. He is 19 years of age. Looking at 10 to 30 and all carry the 85% rule.

Thank you for sharing. You have given me hope. Will follow you with anticipation.

Russell Seaver
Springfield Mo.
Was up trevin this is Titus reed you Mathews dickey Mighty As teammate I still talk with te-airre every day miss you homie I'm reading your letters keep yor head up
I talk about you all the time the hardest throwing pitcher ever and could hit hard
Hey Trevin just stay strong and keep on doing what
T you are doing. And god will answer your prayers