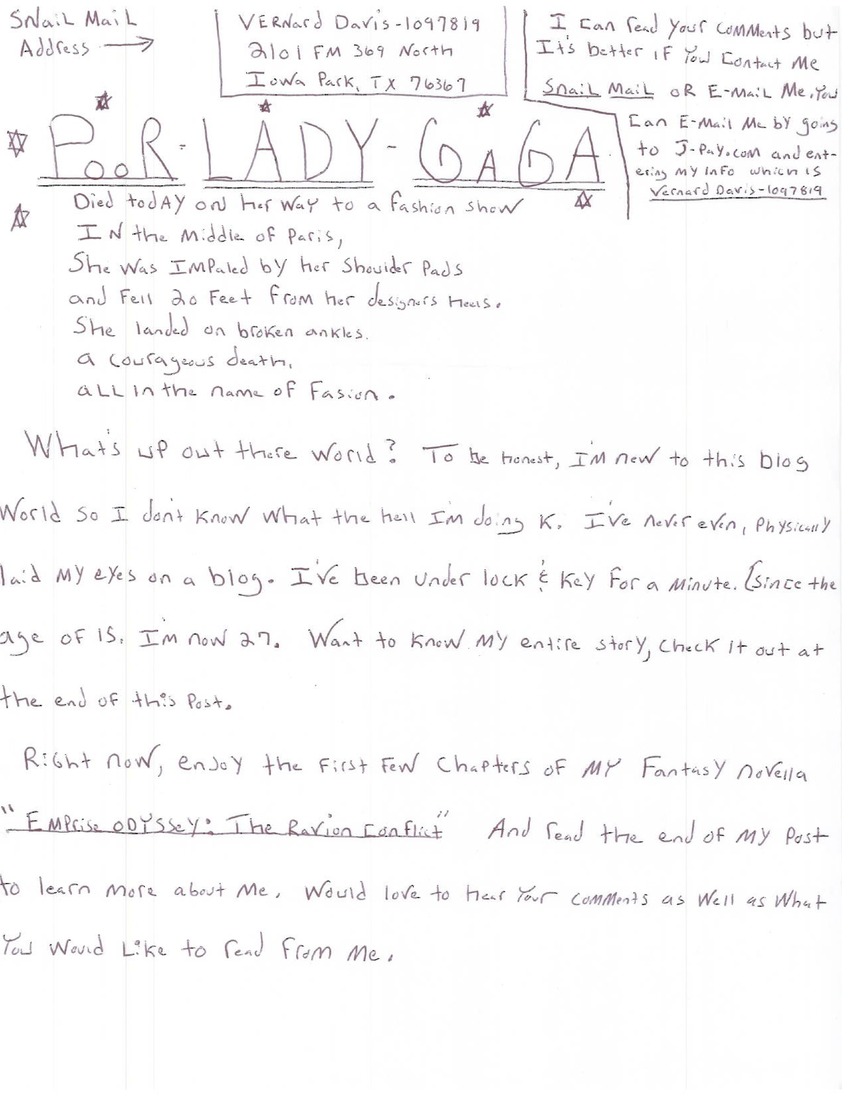 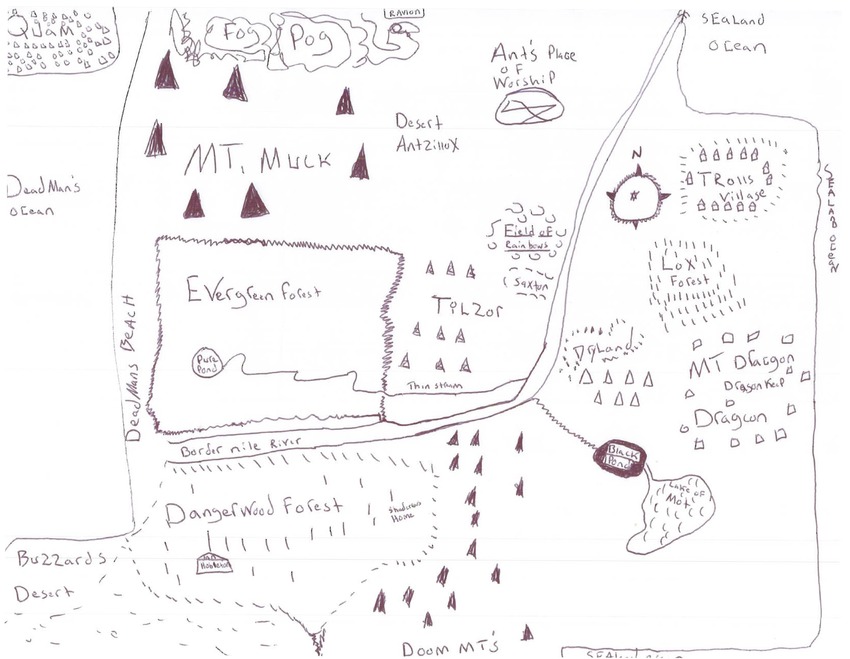 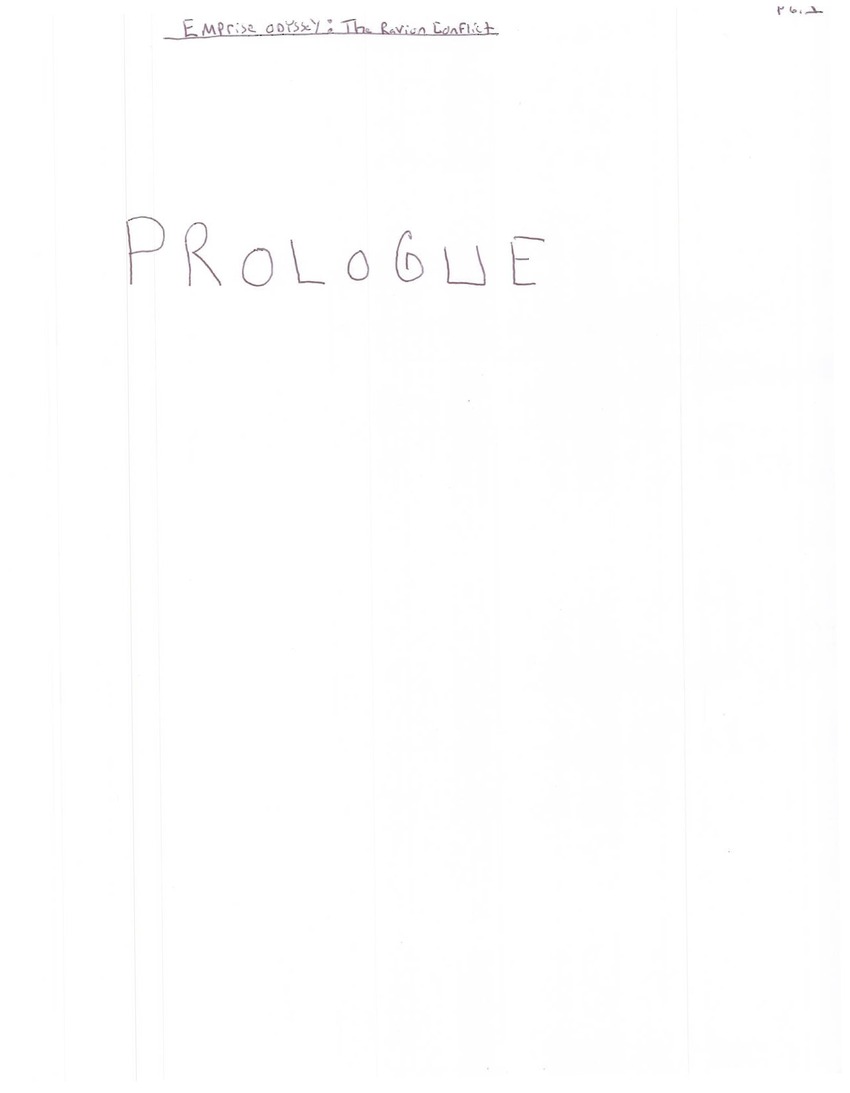 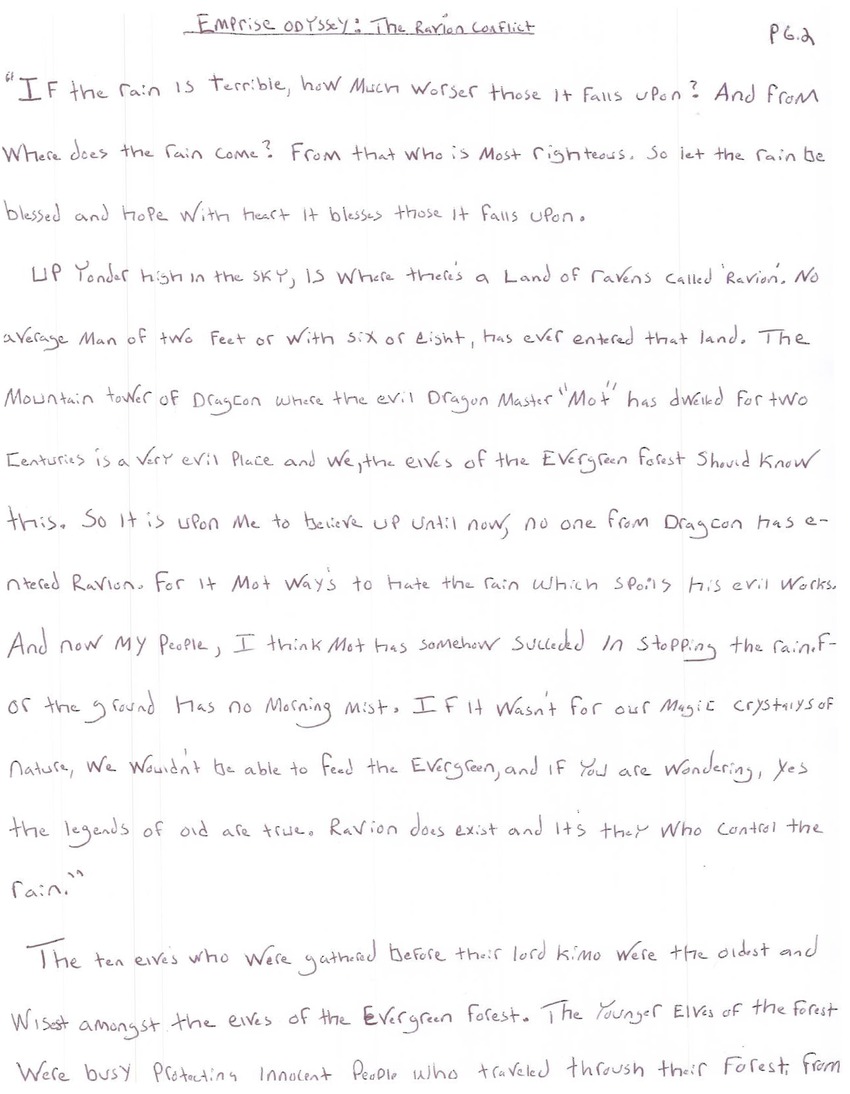 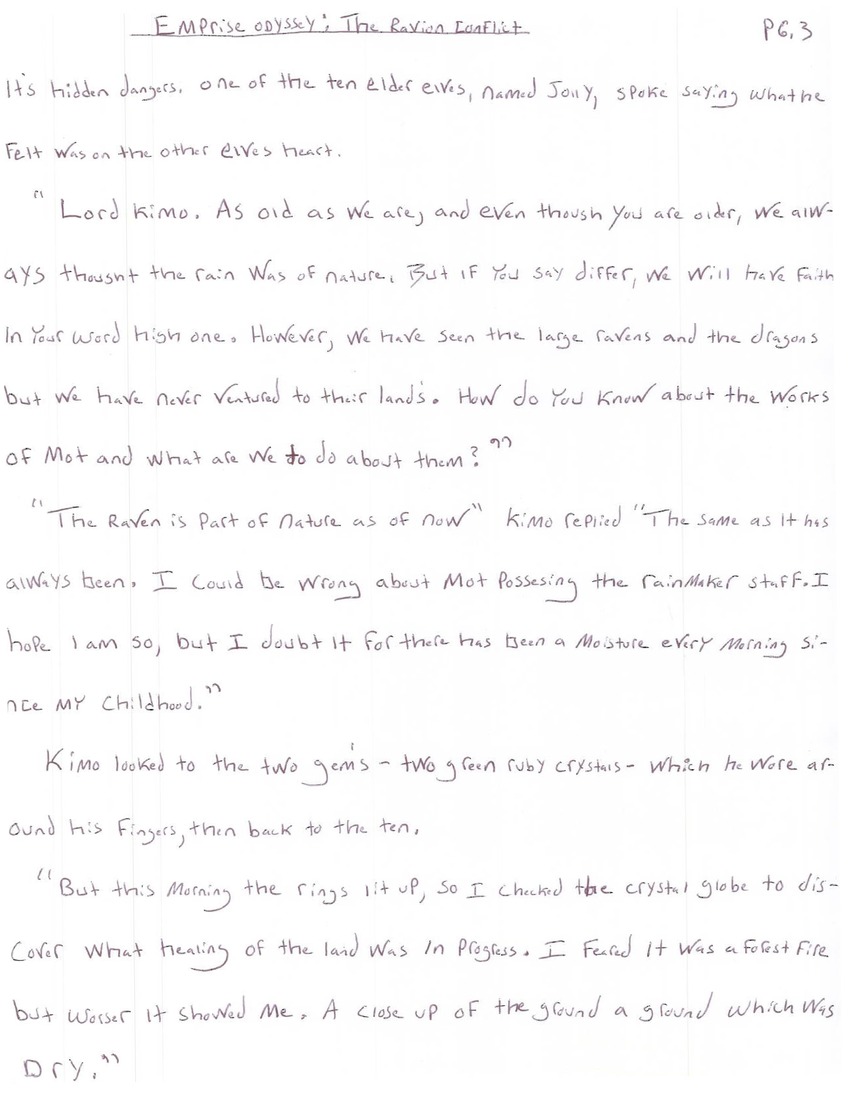 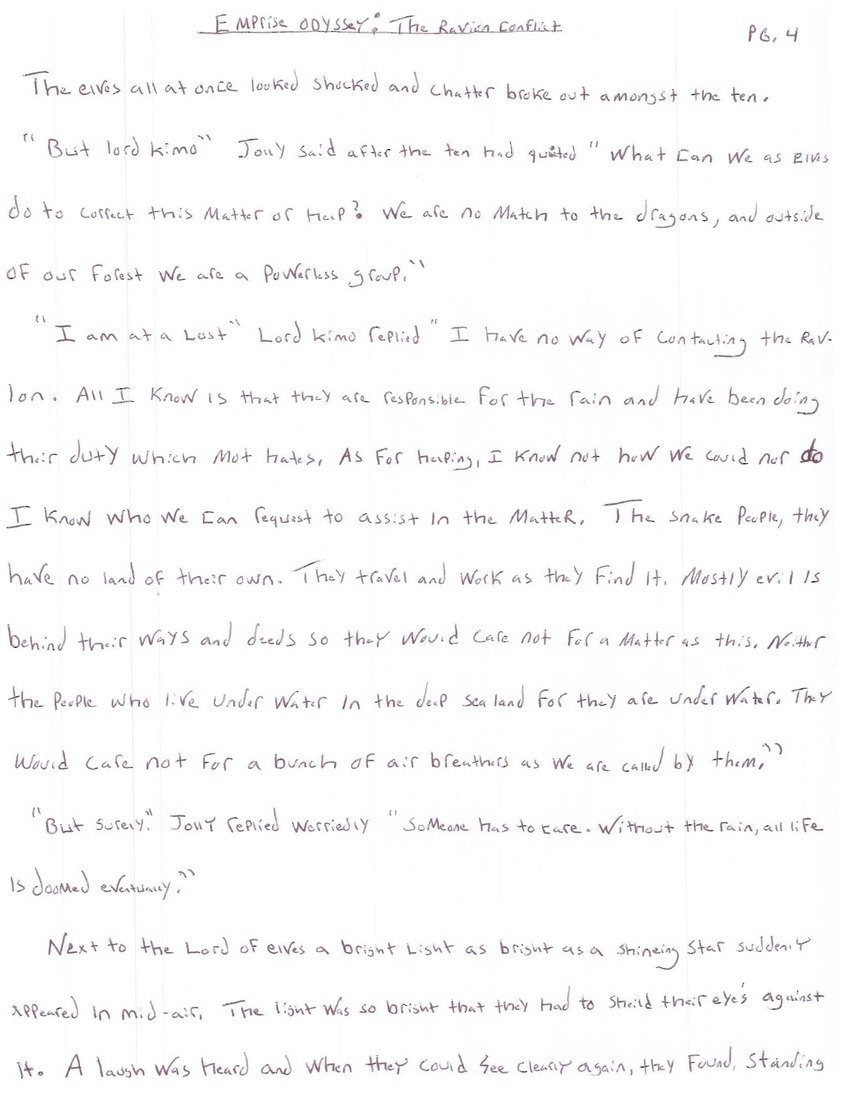 I can read your comments but it's better if you contact me snail mail or e-mail me, you can e-mail me by going to j-pay.com and entering my info which is Vernard Davis - 1097819

Died today on her way to a fashion show
In the middle of Paris,
She was impaled by her shoulder pads
and fell 20 feet from her designers heels.
She landed on broken ankles
a courageous death,
all in the name of fashion.

What's up out there world? To be honest, I'm new to this blog world so I don't know what the hell I'm doing k. I've never even, physically laid my eyes on a blog. I've been under lock & key for a minute. [since the age of 15, I'm now 27. Want to know my entire story, check it out at the end of this post.
Right now, enjoy the first few chapters of my fantasy novella "Emprise Odyssey: The Ravion Conflict" And read the end of my post to learn more about me. Would love to hear your comments as well as what you would like to read from me.

[border with stars]
Would you like to read more of the Emprise Odyssey? If so I will post a few chapters once a week. Do you hate it or would like to read some of my other writings? (hip-hop fiction) Let me know,

LIFE IN A NUTSHELL

My story in a nutshell is such: Adopted, physically abused (but like a red hair stepchild and I'm black) had no one, joined a gang, placed back in foster care where I witnessed little girls (as young as six) getting sexually molested and other unimaginable horrors, developed anger problems from physical abuse, this led to a felony (assault on a public servant) To the court system I was nothing more than a ward of the state and as most wards are, I was manhandled by the lapels and thrown head first into an adult prison system. (I was only 17.) I spent my first years building my reputation. At the time I entered Prison. Texas prisons were a completely different world and I had to be tuffer than men twice my age due to my age. A blessing (to me) was that due to being beat most of my life, I wasn't afraid to be bent up or "clicked" (A slang term for mobbed) on other youngsters, who weren't "fortunate" enough to be raised as I, had the unfortune of being swallowed by the system (sexually assaulted, made to ride [which means paying for protection]. or "turned out" (made into a homosexual) and other things I can describe in detail but that I will spare you of. (unless you want to hear about them) Though I did feel sympathy for some who feel victim, prison, at the time was not a place to be a good samaritan less you become a victim too.
The prison system now (in Texas) is completely different and if you give any credence to what you see on television or in Hollywood movies about prisons, you're greatly misinformed. Though I could go into detail and give you the inside scoop about what really occurs in prison, that is not what I'm going to write about here (if you want to read about such, leaves comments saying so or hit me up snail mail or E-mail devising your request.)
Anyhow, becoming so immersed in my gladiator role, like a method actor who cannot shake a character or well... Robin Williams, I landed myself in Ad-sey where I was forced to be "locked up" 23 hours a day. And it was there that spending a few years in ultimate solitude, wondering why my life was the way it was, I required that it was up to the individual who has had difficulty understanding the causes of his problems in the past and now - to do an honest self-evaluation o himself and his life. This begins by first accepting yourself as worthy of any and all effort you can put forward to overcome the compulsive criminal mentality and any other form of reactionary, compulsive behavior. In the words of an ancient Japanese Philosopher: "The test of a real soldier is to conquer himself."
In ad-sey I grew into myself while maturing and discovered a talent I never knew I had; writing (I've written over eight novels. Most are hip-hop/street fiction for that is what my audience here likes. I've also written the short story fantasy novella which you read a few chapters of and a thriller (vigilante) I'm currently working on a radio drama.) I've also mastered my musical talent (rapping) gotten better at acting (I dd two years of acting school in society) And I've mastered my body, (I have 5% body fat, an unbelievable six-pack, and my body is ripped up.) and I've learned more about business and running a business than an MBA. In a sense, I'm like a lot of people here and it took prison for a lot of us to realize our talents. I've personally heard white guys in prison rap who make Eminem sound like Vanilla Ice. I've read novels written by prisoners who write better than James Patterson. I've seen prisoners who rival Picasso's drawings. Prisoners who are philosophers in thoughts. And it took prison, for a lot, to become aware of such gifts.
Me, I plan to actually utilize everything I've learned and done. My grandiose plans are to get out and become a celebrity, my nickname in prison is Highland Hills but a lot of people call my Hollywood, Some I've asked why and they tell me that I act and carry myself like someone in Hollywood.
Recalling passages from the 50th law; a book by Robert Greene and 50 cents I look at the similarities between myself and other people of great and I realize that hardship must come before the rise, my hardship has been in effect all my life and now (in 6 months) is time for my rise.
I will be released in exactly 6 months I have not disillusioned myself to believe that my rise will be effortless. Quite the contrary actually, for I am getting out with no family support, friends, etc. and I've been in here since the age of 15. DVDs weren't even a sell when I was in society. But to paraphrase 50 cents, a person whose business mind I admire "I will get rich or die trying."
If you want to know more about my life in intimate detail let me know by E-mail, Snail Mail or posting. Davis Vernard out.