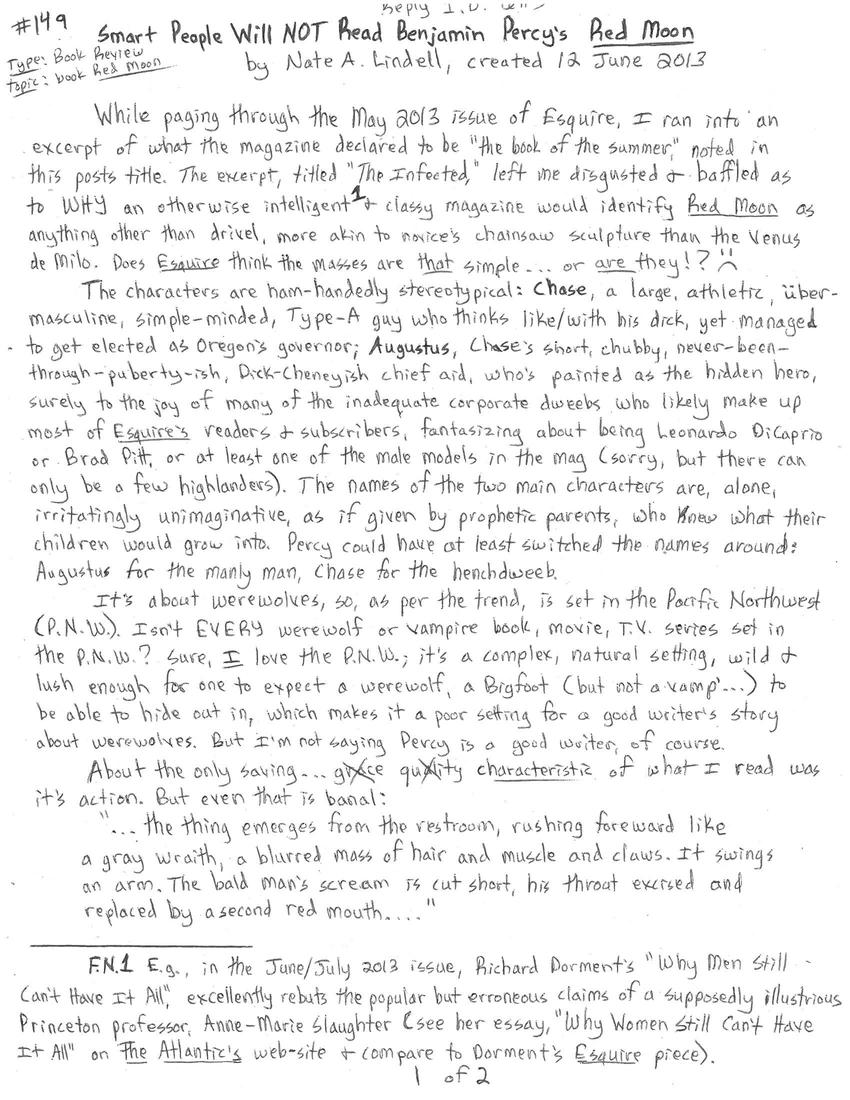 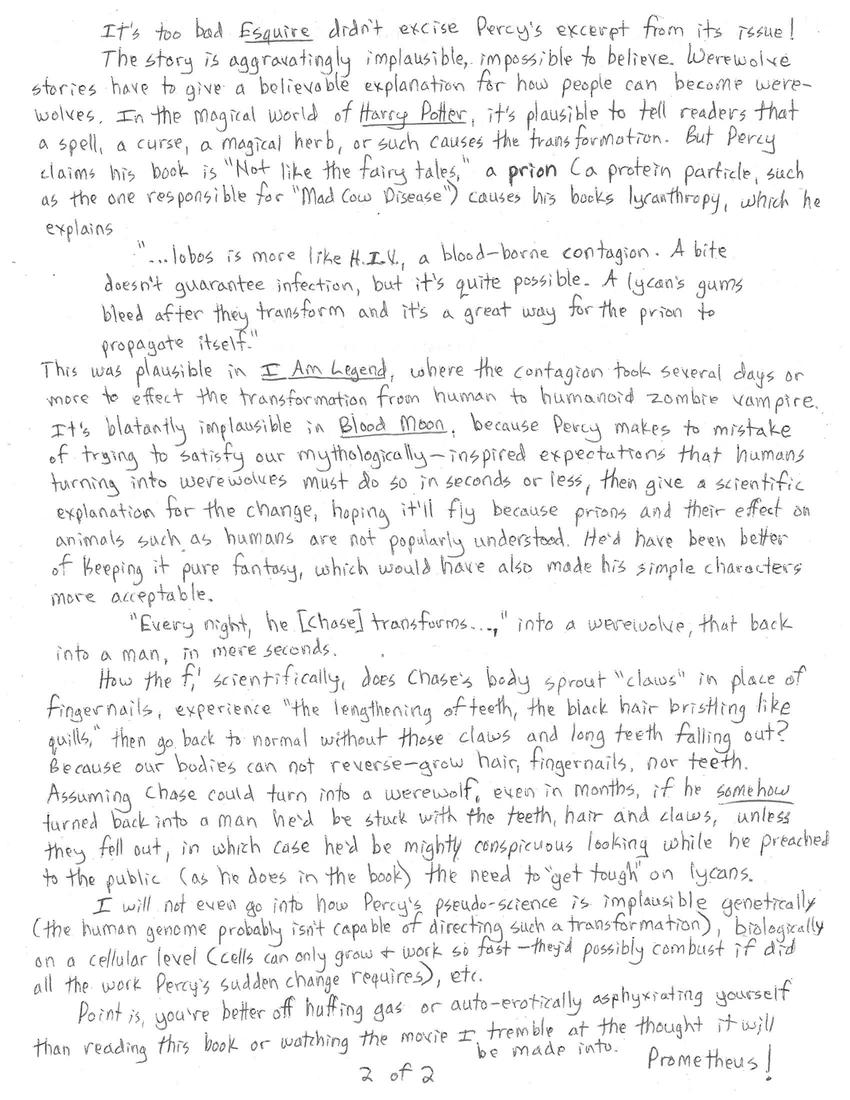 #149; Type: Book Review; Topic: book Red Moon
Smart People Will NOT Read Benjamin Percy's Red Moon (Note: Red Moon is underlined)
by Nate A. Lindell, created 12 June 2013
While paging through the May 2013 issue of Esquire, I ran into an excerpt of what the magazine declared to be "the book of the summer", noted in this post's title. The excerpt, titled "The Infected", left me disgusted and baffled as to WHY an otherwise intelligent^1 (Note: The ^1 indicates a footnote) and classy magazine would identify Red Moon (Note: Red Moon is underlined) as anything other than drivel, more akin to a novice's chainsaw sculpture than the Venus de Milo. Does Esquire (Note: Esquire is underlined) think the masses are THAT simple...or ARE they!? :( (begin footnote) [ 1 - E.g., in the June/July 2013 issue, Richard Dorment's "Why Men Still Can't Have It All" excellently rebuts the popular but erroneous claims of a supposedly illustrious Princeton professor, Anne-Marie Slaughter (see her essay, "Why Women Still Can't Have It All" on The Atlantic's web-site and compare it to Dorment's Esquire piece. ] (end footnote)
The characters are ham-handedly stereotypical: Chase, a large, athletic, uber-masculine, simple-minded, Type-A guy who thinks like/with his dick, yet managed to get elected as Oregon's governor; Augustus, Chase's short, chubby, never-been-through-puberty-ish, Dick-Cheneyish chief aid, who's painted as the hidden hero, surely to the joy of many of the inadequate corporate dweebs who likely make up most of Esquire's (Note: Esquire is underlined) readers and subscribers, fantasizing about being Leonardo DiCaprio or Brad Pitt, or at least one of the male models in the mag (sorry, but there can only be a few highlanders). The names of the two main characters are, alone, irritatingly unimaginative, as if given by prophetic parents, who knew what their children would grow into. Percy could have at least switched the names around: Augustus for the manly man, Chase for the henchdweeb.
It's about werewolves, so, as per the trend, is set in the Pacific Northwest (P.N.W.). Isn't EVERY werewolf or vampire book, movie, and T.V. series set in the P.N.W.? Sure, I (Note: "I" is underlined) love the P.N.W.; it's a complex, natural setting, wild and lush enough for one to expect a werewolf, a Bigfoot (but not a vamp'...) to be able to hide out in, which makes it a poor setting for a good writer's story about werewolves. But I'm not saying Percy is a good writer, of course.
About the only saving characteristic of what I read was it's action. But even that is banal:
"...the thing emerges from the restroom, rushing foreward like a gray wraith, a blurred mass of hair and muscle and claws. It swings an arm. The bald man's scream is cut short, his throat is excised and replaced by a second red mouth...."
It's too bad Esquire (Note: Esquire is underlined) didn't excise Percy's excerpt from its issue!
The story is aggravatingly implausible, impossible to believe. Werewolve stories have to give a believable explanation for how people can become werewolves. In the magical world of Harry Potter, it's plausible to tell readers that a spell, a curse, a magical herb, or such causes the transformation. But Percy claims his book is "Not like the fair tales," a prion (a protein particle, such as the one responsible for "Mad Cow Disease") causes his book's lycanthropy, which he explains
"...lobos is more like H.I.V., a blood-borne contagion. A bite doesn't guarantee infection, but it's quite possible. A lycan's gums bleed after they transform and it's a great way for the prion to propagate itself."
This was plausible in I Am Legend, where the contagion took several days or more to effect the transformation from human to humanoid zombie vampire. It's blatantly implausible in Blood Moon (Note: Blood Moon is underlined), because Percy makes the mistake of trying to satisfy our mythologically-inspired expectations that humans turning into werewolves must do so in seconds or less, then give a scientific explanation for the change, hoping it'll fly because prions and their effect on animals such as humans are not popularly understood. He'd have been better of keeping it pure fantasy, which would have also made his simple characters more acceptable.
"Every night, he (Chase) transforms..." into a werewolve, then back into a man, in mere seconds. How the f', scientifically, does Chase's body sprout "claws" in place of fingernails, experience "the lengthening of teeth, the black hair bristling like quills", then go back to normal without those claws and long teeth falling out? Because our bodies cannot reverse-grow hair, fingernails, nor teeth. Assuming Chase could turn into a werewolf, even in months, if he somehow (Note: "somehow" is underlined) turned back into a man he'd be stuck with teeth, hair and claws, unless they fell out, in which case he'd be mighty conspicuous looking while he preached to the public (as he does in the book) the need to "get tough" on lycans.
I will not even go into how Percy's pseudo-science is implausible genetically (the human genome probably isn't capable of directing such a transformation), biologically on a cellular level (cells can only grow and work so fast -- they'd possibly combust if they did all the work Percy's sudden change requires), etc.
Point is, you're better off huffing gas or auto-erotically asphyxiating yourself than reading this book or watching the movie I tremble at the thought it will be made into.
Prometheus!

Thank you so much for the book review! Now I know which book NOT to read this summer! Your article was very well-written, with an expansive vocabulary, hilarious sarcasm (I LOVED the excise joke!), and vivid imagery (I really liked the novice chain sculpture-Venus de Milo contrast; it's very imaginative on two levels). Please keep up the good work, Nate! I look forward to your next article!
--Calhoun25