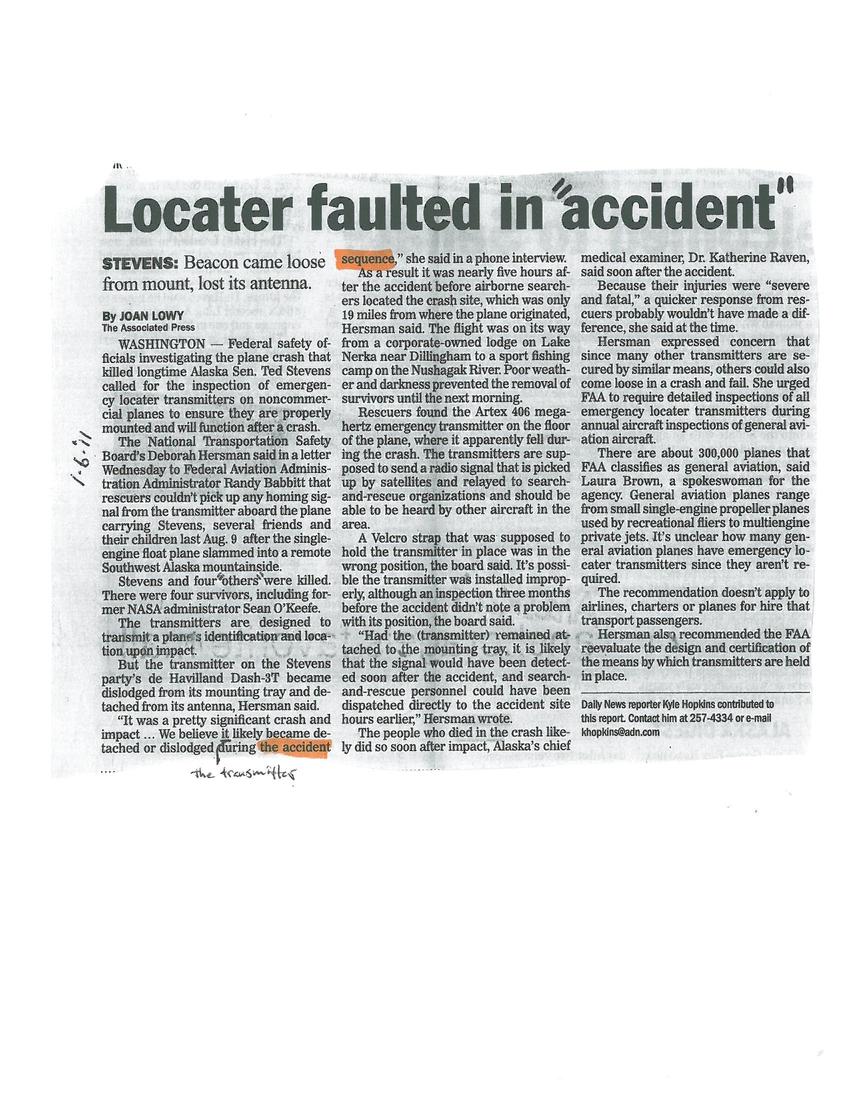 By JOAN LOWY
The Associated Press

WASHINGTON - Federal safety officials investigating the plane crash that killed longtime Alaska Sen. Ted Stevens called for the inspection of emergency locator transmitters on noncommercial planes to ensure they are properly mounted and will function after a crash.

The National Transportation Safety Board's Deborah Hersman said in a letter Wednesday to Federal Aviation Administration Administrator Randy Babbitt that rescuers couldn't pick up any homing signal from the transmitter aboard the plane carrying Stevens, several friends and their children last Aug. 9 after the single-engine float plane slammed into a remote Southwest Alaska mountainside.

Stevens and four "others" [quote marks added by inmate] were killed. There were four survivors, including former NASA administrator Sean O'Keefe.

The transmitters are designed to transmit a plane's identification and location upon impact.

But the transmitter on the Stevens party's de Havilland Dash-3T became dislodged from its mounting tray and detached from its antenna, Hersman said.

"It was a pretty significant crash and impact... We believe it [the transmitter] likely became detached or dislodged during the accident sequence", she said in a phone interview.

As a result it was nearly five hours after the accident before airborne searchers located the crash site, which was only 19 miles from where the plane originated, Hersman said. The flight was on its way from a corporate-owned lodge on Lake Nerka near Dillingham to a sport fishing camp on the Nushagak River. Poor weather and darkness prevented the removal of survivors until the next morning.

Rescuers found the Artex 406 megahertz emergency transmitter on the floor of the plane, where it apparently fell during the crash. The transmitters are supposed to send a radio signal that is picked up by satellites and relayed to search-and-rescue organizations and should be able to be heard by other aircraft in the area.

"Had the (transmitter) remained attached to the mounting tray, it is likely that the signal would have been detected soon after the accident, and search-and-rescue personnel could have been dispatched directly to the accident site hours earlier", Hersman wrote.

The people who died in the crash likely did so soon after impact, Alaska's chief medical examiner, Dr. Katherine Raven, said soon after the accident.

Because their injuries were "severe and fatal", a quicker response from rescuers probably wouldn't have made a difference, she said at the time.

Hersman expressed concern that since many other transmitters are secured by similar means, others could also come loose in a crash and fail. She urged FAA to require detailed inspections of all emergency locator transmitters during annual aircraft inspections of general aviation aircraft.

The recommendation doesn't apply to airlines, charters or planes for hire that transport passengers.

Hersman also recommended the FAA reevaluate the design and certification of the means by which transmitters are held in place.

Daily News reporter Kyle Hopkins contributed to this report. Contact him at 257-4334 or e-mail khopkins@adn.com.