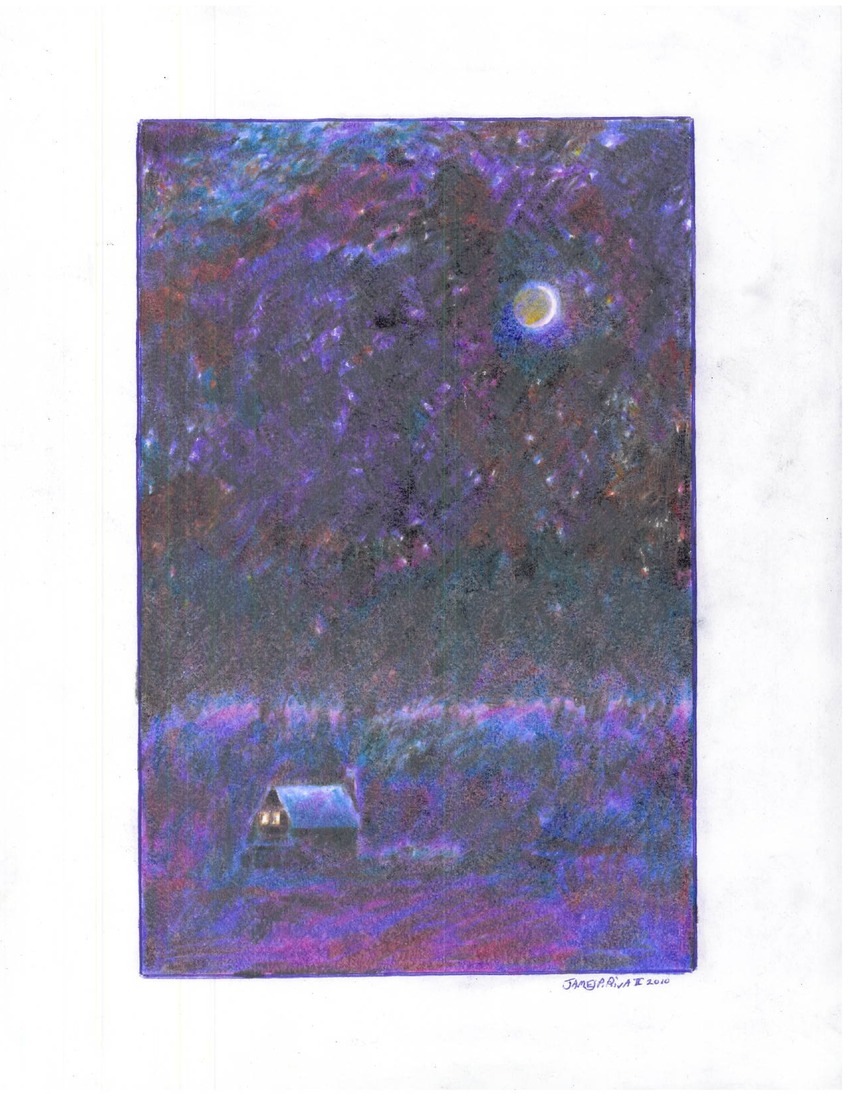 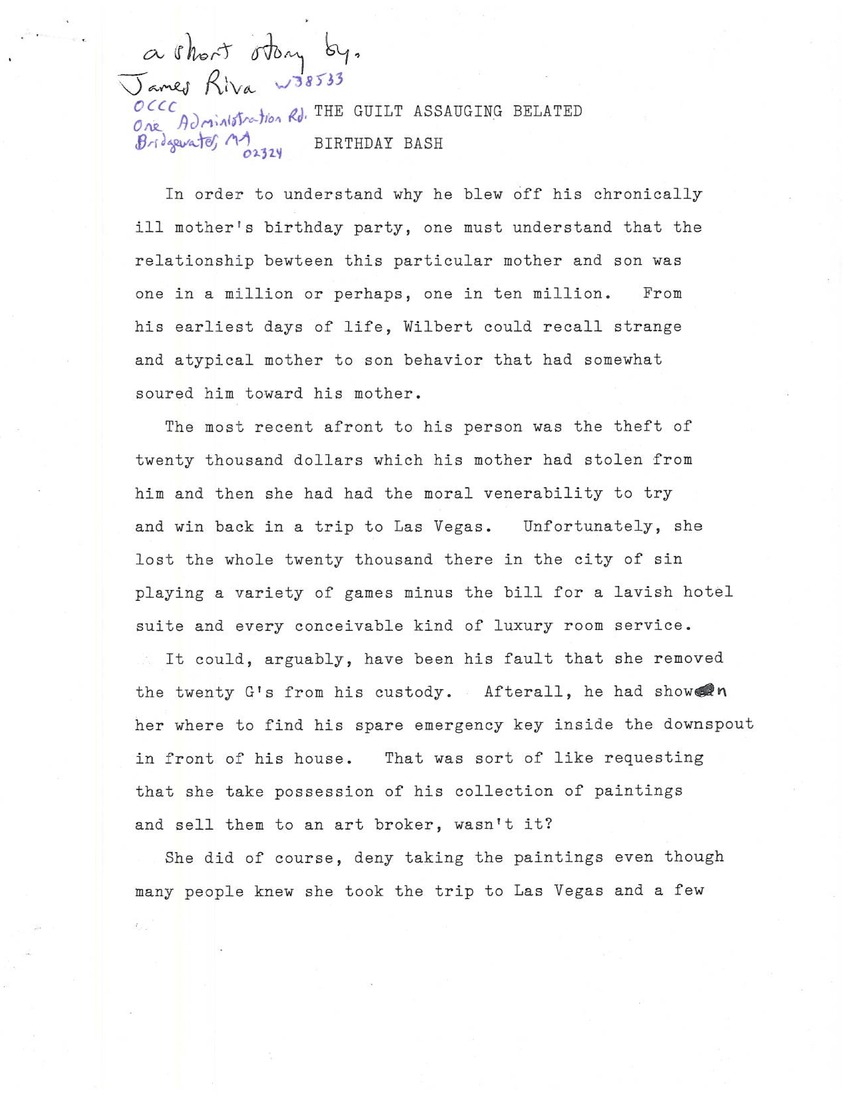 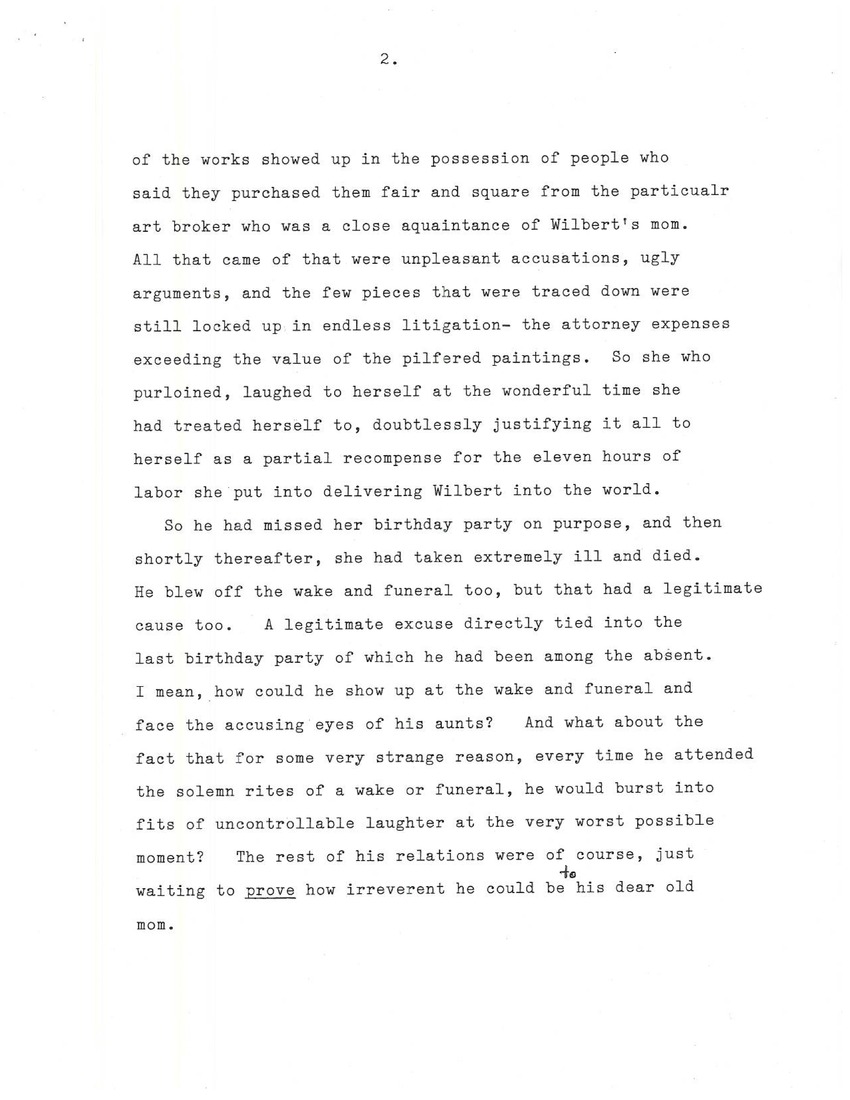 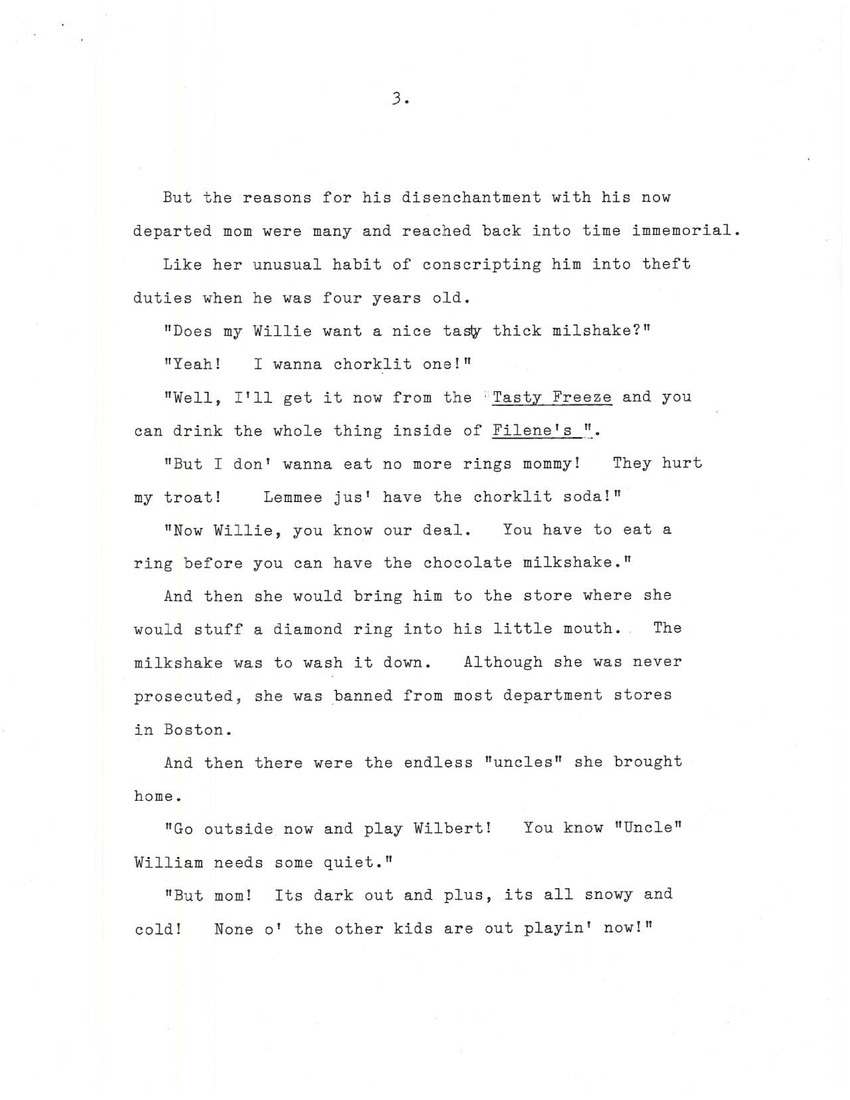 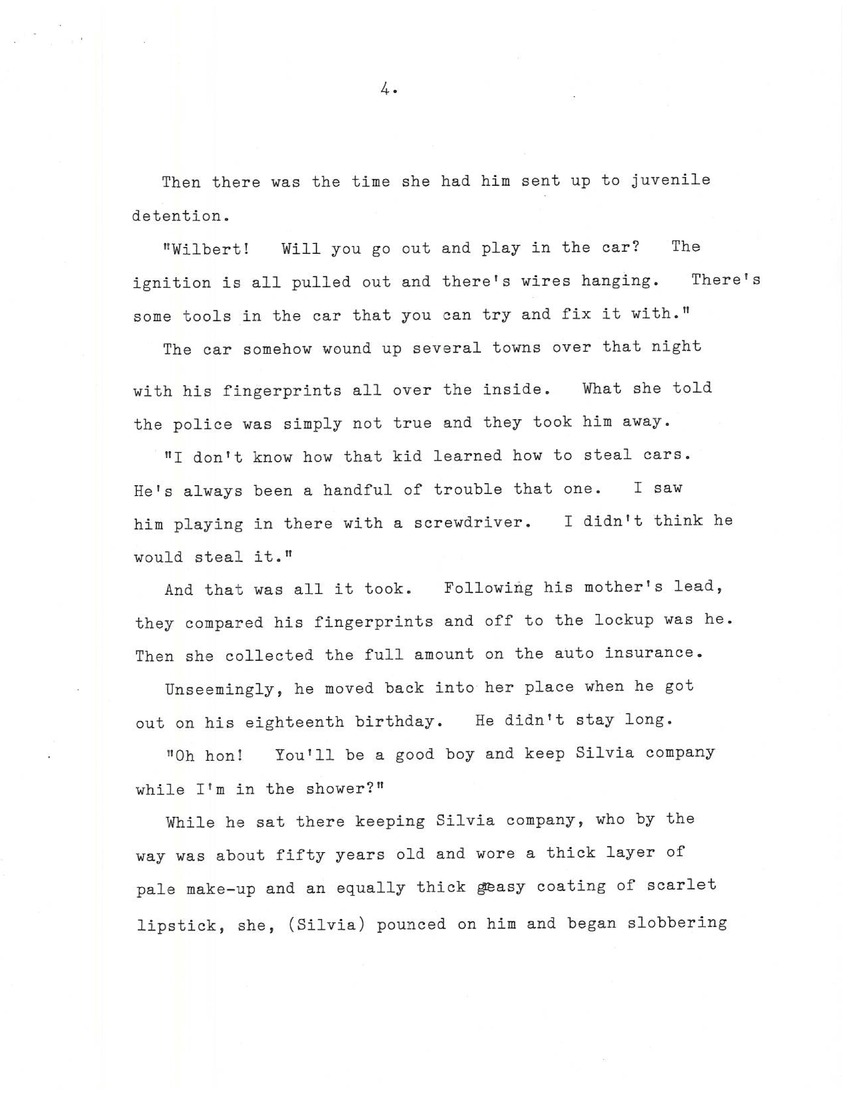 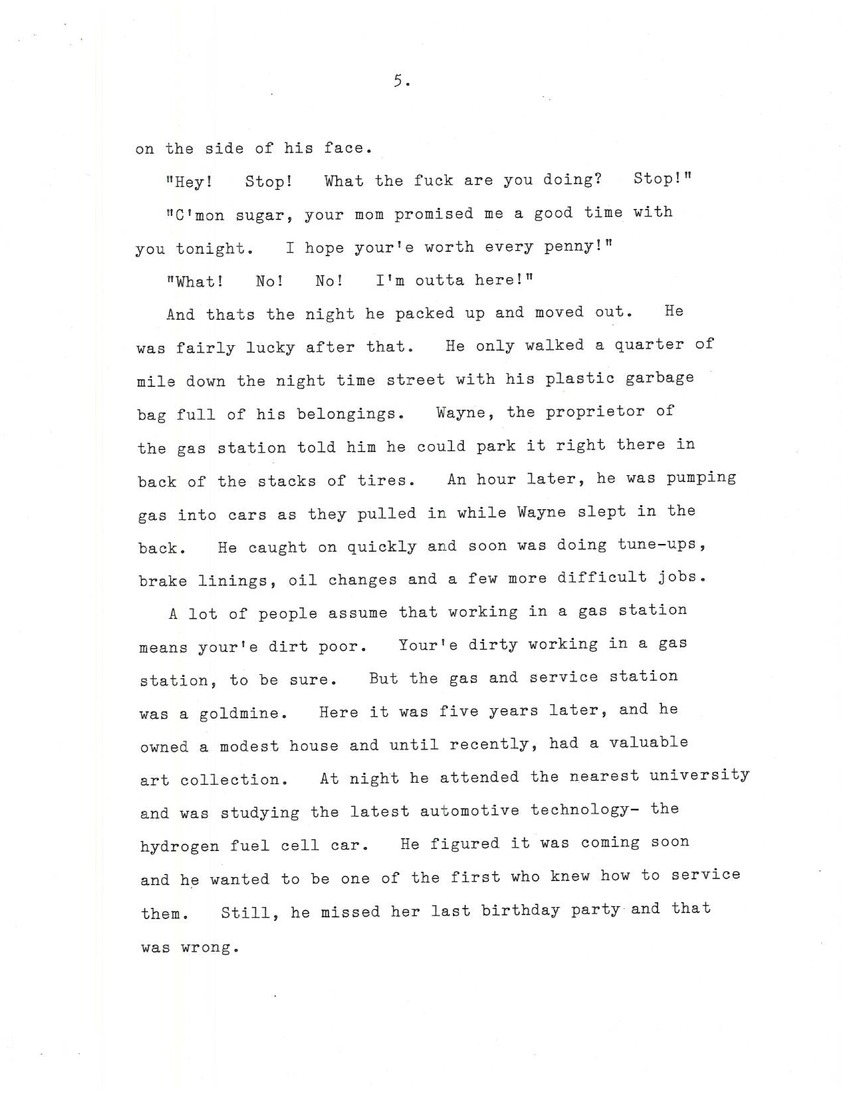 In order to understand why he blew off his chronically ill mother's birthday party, one must understand that the relationship bewteen this particular mother and son was one in a million or perhaps, one in ten million. From his earliest days of life, Wilbert could recall strange and atypical mother to son behavior that had somewhat soured him toward his mother.
The most recent afront to his person was the theft of twenty thousand dollars which his mother had stolen from him and then she had had the moral venerability to try and win back in a trip to Las Vegas. Unfortunately, she lost the whole twenty thousand there in the city of sin playing a variety of games minus the bill for a lavish hotel suite and every conceivable kind of luxury room service.
It could, arguably, have been his fault that she removed the twenty G's from his custody. Afterall, he had shown her where to find his spare emergency key inside the downspout in front of his house. That was sort of like requesting that she take possession of his collection of paintings and sell them to an art broker, wasn't it?
She did of course, deny taking the paintings even though many people knew she took the trip to Las Vegas and a few

of the works showed up in the possession of people who said they purchased them fair and square from the particular art broker who was a close aquaintance of Wilbert's mom. All that came of that were unpleasant accusations, ugly arguments, and the few pieces that were traced down were still locked up in endless litigation- the attorney expenses exceeding the value of the pilfered paintings. So she who purloined, laughed to herself at the wonderful time she had treated herself to, doubtlessly justifying it all to herself as a partial recompense for the eleven hours of labor she put into delivering Wilbert into the world.
So he had missed her birthday party on purpose, and then shortly thereafter, she had taken extremely ill and died. He blew off the wake and funeral too, but that had a legitimate cause too. A legitimate excuse directly tied into the last birthday party of which he had been among the absent. I mean, how oould he show up at the wake and funeral and face the accusing eyes of his aunts? And what about the fact that for some very strange reason, every time he attended the solemn rites of a wake or funeral, he would burst into fits of uncontrollable laghter at the very worst possible moment? The rest of his relations were of course, just waiting to prove how irreverent he could be to his dear old mom.

But the reasons for his disenchantment with his now departed mom were many and reached back into time immemorial.
Like her unusual habit of conscripting him into theft duties when he was four years old.
"Does my Willie want a nice tasty thick milshake?"
"Yeah! I wanna chorklit one!"
"Well, I'll get it now from the Tasty Freeze and you can drink the whole thing inside of Filene's".
"But I don' wanna eat no more rings mommy! They hurt my troat! Lemmee jus' have the chorklit soda!"
"Now Willie, you know our deal. You have to eat a ring before you can have the chocolate milkshake."
And then she would bring him to the store where she would stuff a diamond ring into his little mouth. The milkshake was to wash it down. Although she was never prosecuted, she was banned fom most department stores in Boston.
And then there were the endless "uncles" she brought home.
"Go outside now and play Wilbert! You know "Uncle" William needs some quiet."
"But mom! Its dark out and plus, its all snowy and cold! None o' the other kids are out playin' now!"

Then there was the time she had him sent up to juvenile detention.
"Wilbert! Will you go out and play in the car? The ignition is all pulled out and there's wires hanging. There's some tools in the car that you can try and fix it with."
The car somehow wound up several towns over that night with his fingerprints all over the inside. What she told the police was simply not true and they took him away.
"I don't know how that kid learned to steal cars. He's always been a handful of trouble that one. I saw him playing in there with a screwdriver. I didn't think he would steal it."
And that was all it took. Following his mother's lead, they compared his fingerprints and off to the lockup was he. Then she collected the full amount on the auto insurance.
Unseemingly, he moved back into her place when he got out on his eighteenth birthday. He didn't stay long.
"Oh hon! You'll be a good boy and keep Silvia company while I'm in the shower?"
While he sat there keeping Silvia company, who by the way was about fifty years old and wore a thick layer of pale make-up and an equally thick greasy coating of scarlet lipstick, she, (Silvia) pounced on him and began slobbering

on the side of his face.
"Hey! Stop! What the fuck are you doing? Stop!"
"C'mon sugar, your mom promised me a good time with you tonight. I hope your'e worth every penny!"
"What! No! No! I'm outta here!"
And that's the night he packed up and moved out. He was fairly lucky after that. He only walked a quarter of mile down the night time street with his plastic garbage bag full of his belongings. Wayne, the proprietor of the gas station told him he could park it right there in back of the stacks of tires. An hour later, he was pumping gas into cars as they pulled in while Wayne slept in the back. He caught on quickly and soon was doing tune-ups, brake linings, oil changes and a few more difficult jobs.
A lot of people assume that working in a gas station means your'e dirt poor. Your'e dirty working in a gas station, to be sure. But the gas and service station was a goldmine. Here it was five years later, and he owned a modest house and until recently, had a valuable art collection. At night he attended the nearest university and was studying the latest automotive technology- the hydrogen fuel cell car. He figured it was coming soon and he wanted to be one of the first who knew how to service them. Still, he missed her last birthday party and that was wrong.

He was talking online with another affilliated service station in New Hampshire and he had developed an online friendship with this fellow gas jockey and mechanic. The fellow agreed to accept the package from Ohio when it arrived and notify Will and hold it for him until he picked it up. This will definitely make up for that birthday party- he thought to himself.
He ordered the fireworks directly online from the factory that made them in Ohio and got a special deal on "pinwheels" which were these lightweight wire frames that looked like miniature Eiffel towers with a swastika mounted at the top. On each arm of the swastika were large cpacity rockets with alternating sparks of red white and blue. He also ordered one hundred of the biggest sparklers they had, the twenty four inch kind. Then he ordered six of the largest roman candles they had. These were each three feet long not including the steel spike at the bottom to stick it into the ground. Each of these roman candles contained forty balls of colored flame in alternating red white and blue. After yielding his credit card number, the order was finalized and the message on the screen told him his order would arrive at his friend in New Hampshire's garage in less than two weeks.

He then ordered his mother's favorite, the large stuffed teddy bear- five of them. She had always insisted of each of her many boyfriends that they buy her one. Her bedroom had been full of them. He didn't know what had happened to all of them after she died. Her creditors had come and taken everything else, so maybe they took the teddy bear collection too. ANyway, here were five of them and they were only twentyfive bucks apiece.
Ten days later, his pal in New Hampshire left him an "E" message at the gas station. After asking Wayne for the rest of the day off, he drove up across the state line into New Hampshire and picked up his large crate of fireworks. He covered it with a canvas tarp and half closed the trunk lid on it using a rubber fastener with steel hooks on each end. Luckily, it did not rain on the way back to Massachusetts.
It was a few weeks before Christmas and he passed a Catholic church that had erected a life size creshe complete with hand painted statues and lots of straw strewn about. His mother had been a seasonal Catholic, meaning thst she had attended mass once in a great while. The parish at Saint Mary's had not objected to her being buried alongside of the more devout.
He picked a clear cold, moonlit night. The December air made clouds of vapor as he continued his mighty exertions with the tools. The sounds of his labor echoed through

the night, but no one heard.
WHen the work was finished, he sat on the huge pile of earth and took in the silence- resting until his heartbeat returned to normal and his heavy breathing slowed. He loaded the car and headed back to the gas station. It was only a little after eleven at night. He had made good time, but then, he had always been a hard worker.
The afternoon edition of the local paper the next day carried the following:

Stoughton police responding to a
complaint of an illegal fireworks
display taking place in front of a
service station on Summer Street
were mortified to discover a huge
fireworks display surrounding an
unidentified embalmed and mummified
corpse of a woman. The bizarre
spectacle also included several
large teddy bears, each holding two
large sparklers. The corpse itself
had several large sparklers wedged
between its teeth.
There apparently, was also cake.
In front of each teddy bear was a
paper plate with a slice of fresh
piece of birthday cake.
Officers responding were cautious
in approaching such a large pyro-
technic display and waited a full
twenty minutes for the fireworks
to fully expend themselves.
A man identified as Wilbert
Samson was observed watching nearby.
He was taken into custody when it
was noted that he was holding an
expended item of fireworks. He
was reported to have shrieked as
they applied the handcuffs:
"HAPPY BIRTHDAY MOM!"
He is due to be arraingned today
in Stoughton District Court.