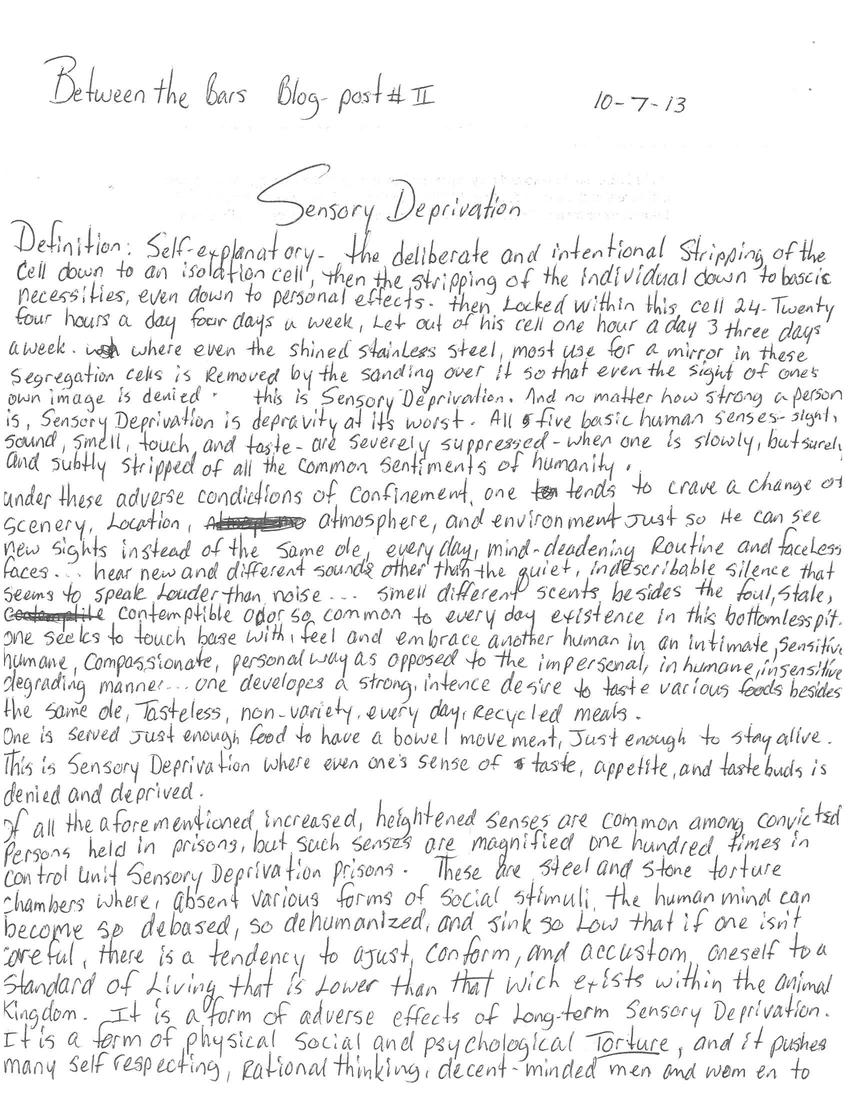 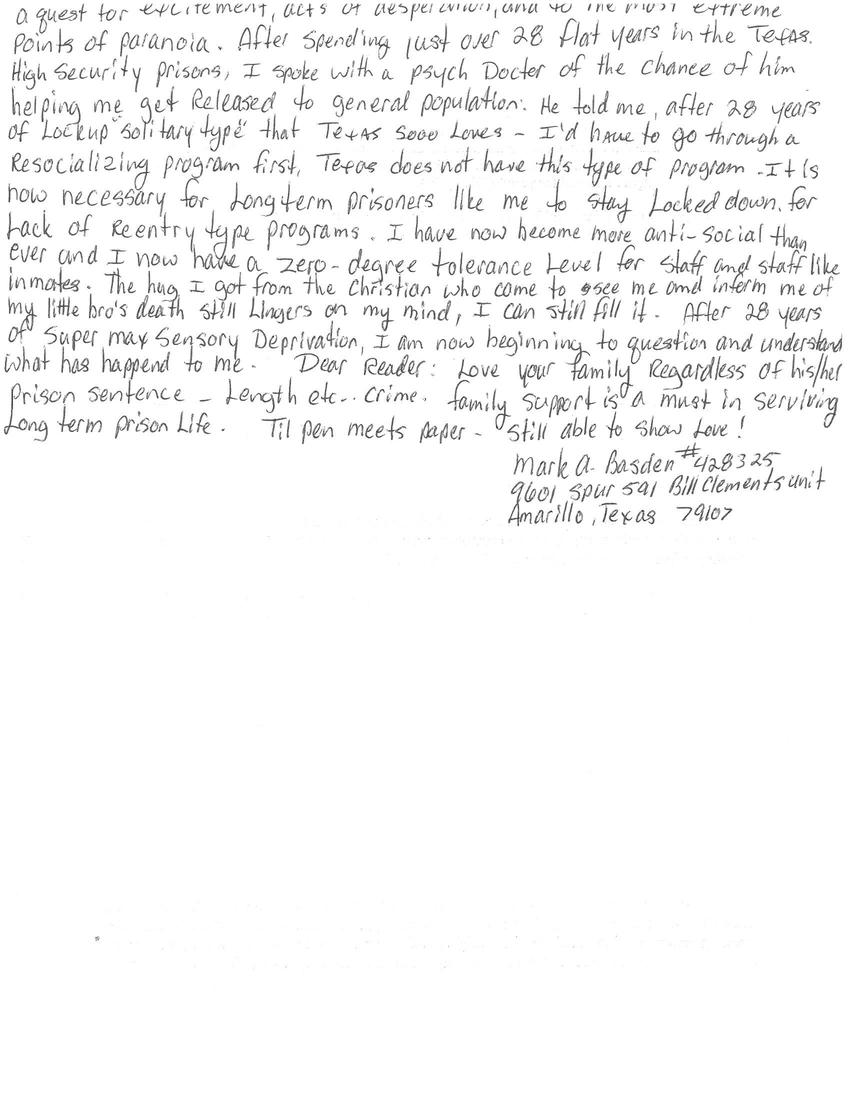 Definition: Self-explanatory - the deliberate and intentional stripping of the cell down to an isolation cell, then the stripping of the individual down to basic necessities, even down to personal effects. Then locked within this cell 24 - twenty four hours a day, four days a week, let out of his cell one hour a day, 3 three days a week. Where even the shined stainless steel, most use for a mirror in these segregation cells is removed by the sanding over it so that even the sight of one's own image is denied. This is sensory deprivation. And no matter how strong a person is, sensory deprivation is depravity at its worst. All five basic human senses - sight, sound, smell, touch, and taste - are severely suppressed - when one is slowly, but surely and subtly stripped of all the common sentiments of humanity.

Under these adverse conditions of confinement, one tends to crave a change of scenery, location, atmosphere, and environment just so he can see new sights instead of the same ole, every day, mind-deadening routine and faceless faces... hear new and different sounds other than the quiet, indescribable silence that seems to speak louder than noise... smell different scents besides the foul, stale, contemptible odor so common to every day existence in this bottomless pit. One seeks to touch base with, feel and embrace another human in an intimate, sensitive, humane, compassionate, personal way as opposed to the impersonal, inhumane, insensitive, degrading manner... One develops a strong, intense desire to taste various foods besides the same ole, tasteless, non-variety, every day, recycled meals.

One is served just enough food to have a bowel movement. Just enough to stay alive. This is sensory deprivation where even one's sense of taste, appetite, and taste buds is denied and deprived.

Of all the aforementioned increased, heightened senses are common among convicted persons held in prisons, but such senses are magnified one hundred times in control unit sensory deprivation prisons. These are steel and stone torture chambers where, absent various forms of social stimuli, the human mind can become so debased, so dehumanized, and sink so low that if one isn't careful, there is a tendency to adjust, conform, and accustom oneself to a standard of living that is lower than that which exists within the animal kingdom. It is a form of adverse effects of long-term sensory deprivation. It is a form of physical, social and psychological TORTURE, and it pushes many self respecting, rational thinking, decent-minded men and women to a quest for excitement, acts of desperation, and to the most extreme points of paranoia. After spending just over 28 flat years in the Texas high security prisons, I spoke with a psych doctor of the chance of him helping me get released to general population. He told me, after 28 years of lock-up "solitary type" that Texas sooo loves - I'd have to go through a resocializing program first. Texas does not have this type of program. It is now necessary for long term prisoners like me to stay locked down, for lack of reentry type programs. I have now become more anti-social than ever and I now have a zero-degree tolerance level for staff and staff like inmates. The hug I got from the Christian who came to see me and inform me of my little bro's death still lingers on my mind, I can still feel it. After 28 years of super max sensory deprivation, I am now beginning to question and understand what has happened to me. Dear Reader: Love your family regardless of his/her prison sentence - length etc... crime. Family support is a must in surviving long term prison life. 'Til pen meets paper - still able to show love!