Greetings to everyone here with me in "cyberspace," welcome to my blog 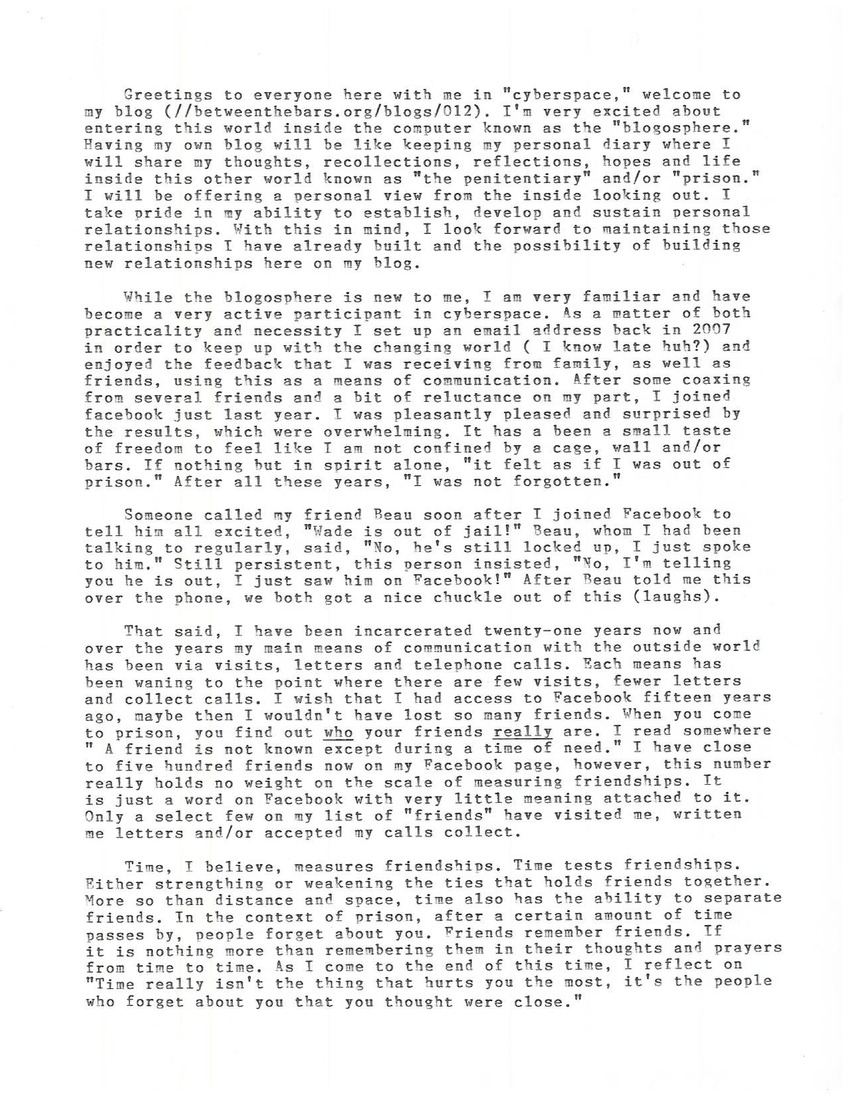 Greetings to everyone here with me in "cyberspace," welcome to
my blog (//betweenthebars.org/blogs/012). I'm very excited about
entering this world inside the computer known as the "blogosphere."
Having my own blog will be like keeping my personal diary where I
will share my thoughts, recollections, reflections, hopes and life
inside this other world known as "the penitentiary" and/or "prison."
I will be offering a personal view from the inside looking out. I
take pride in my ability to establish, develop and sustain personal
relationships. With this in mind, I look forward to maintaining those
relationships I have already built and the possibility of building
new relationships here on my blog.

While the blogosphere is new to me, I am very familiar and have
become a very active participant in cyberspace. As a matter of both
practicality and necessity I set up an email address back in 2007
in order to keep up with the changing world (I know late huh?) and
enjoyed the feedback that I was receiving from family, as well as
friends, using this as a means of communication. After some coaxing
from several friends and a bit of reluctance on my part, I joined
Facebook just last year. I was pleasantly pleased and surprised by
the results, which were overwhelming. It has been a small taste
of freedom to feel like I am not confined by a cage, wall and/or
bars. If nothing but in spirit alone, "it felt as if I was out of
prison." After all these years, "I was not forgotten."

Someone called my friend Beau soon after I joined Facebook to
tell him all excited "Wade is out of jail!" Beau, whom I had been
talking to regularly, said, "No he's still locked up, I just spoke
to him." Still persistent, this person insisted, "No, I'm telling
you he is out, I just saw him on Facebook!" After Beau told me this
over the phone, we both got a nice chuckle out of this (laughs).

That said, I have been incarcerated twenty-one years now and
over the years my main means of communication with the outside world
have been via visits, letters and telephone calls. Each means has
been waning to the point where there are few visits, fewer letters
and collect calls. I wish that I had access to Facebook fifteen years
ago, maybe then I wouldn't have lost so many friends. When you come
to prison, you find out who your friends really are. I read somwhere
"A friend is not known except during a time of need." I have close
to five hundred friends now on my Facebook page, however, this number
really holds no weight on the scale of measuring friendships. It
is just a word on Facebook with very little meaning attached to it.
Only a select few on my list of "friends" have visited me, written
me letters and/or accepted my calls collect.

Time, I believe, measures friendships. Time tests friendships.
Either strengthing or weakening the ties that hold friends together.
More so than distance and space, time also has the ability to separate
friends. In the context of prison, after a certain amount of time
passes by, people forget about you. Friends remember friends. If
it is nothing more than remembering them in their thoughts and prayers
from time to time. As I come to the end of this time, I reflect on
"Time really isn't the thing that hurts you the most, it's the people
who forget about you that you thought were close."