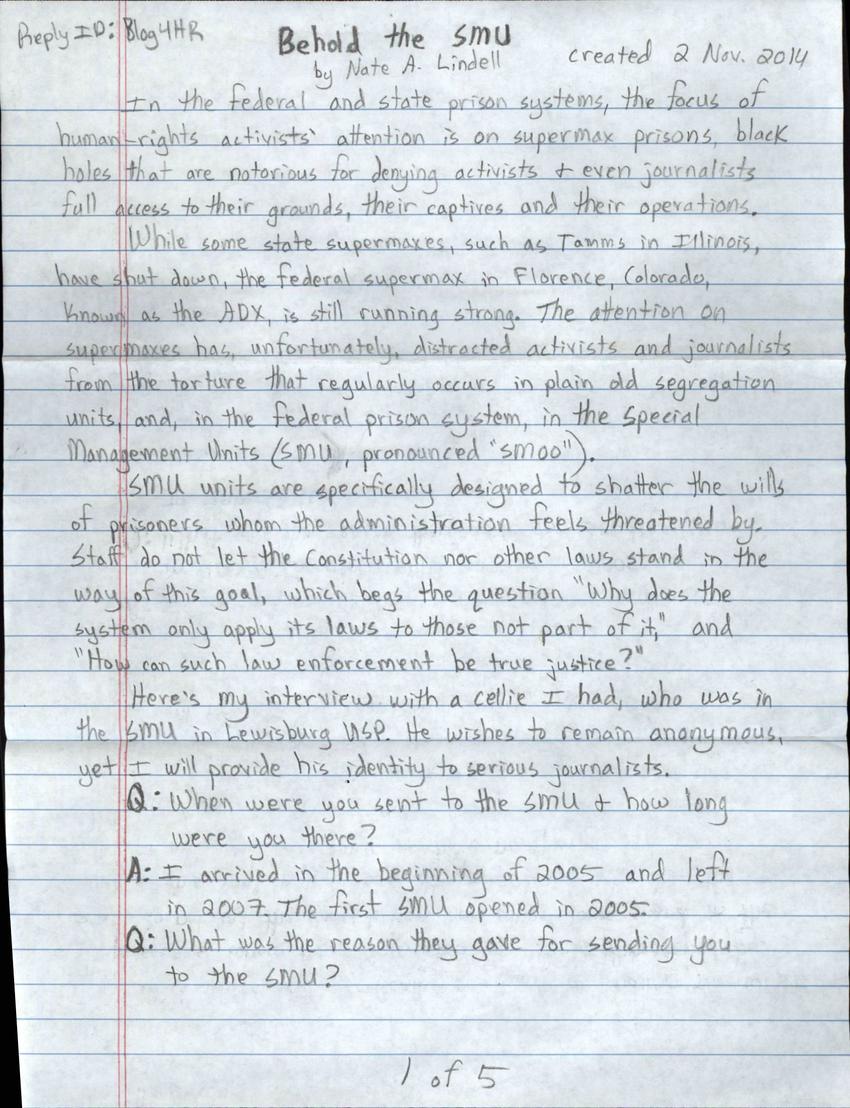 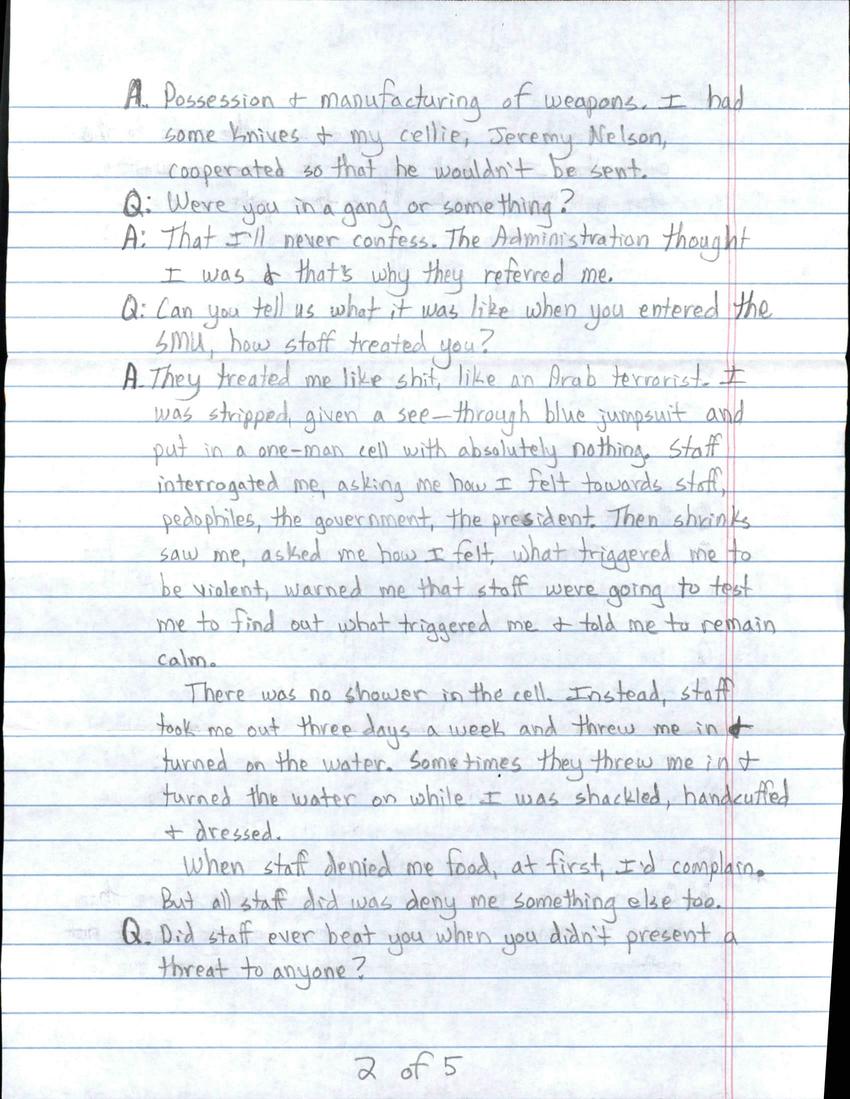 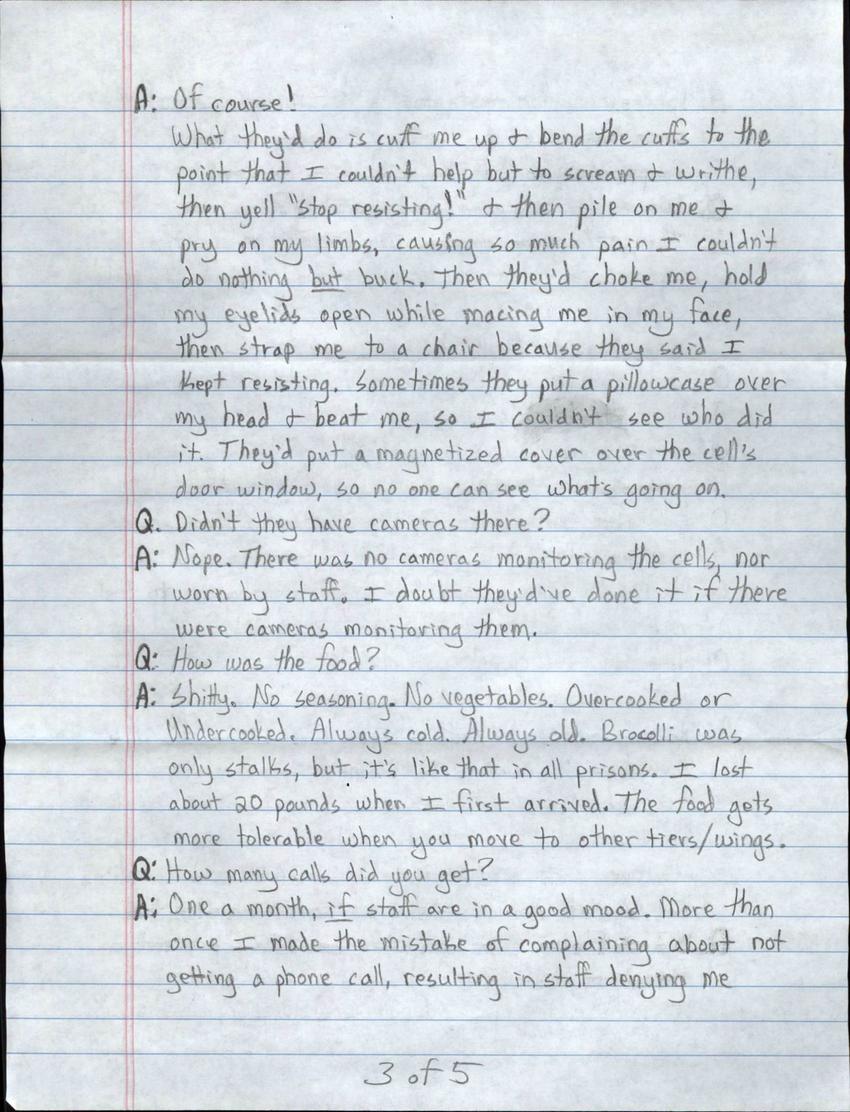 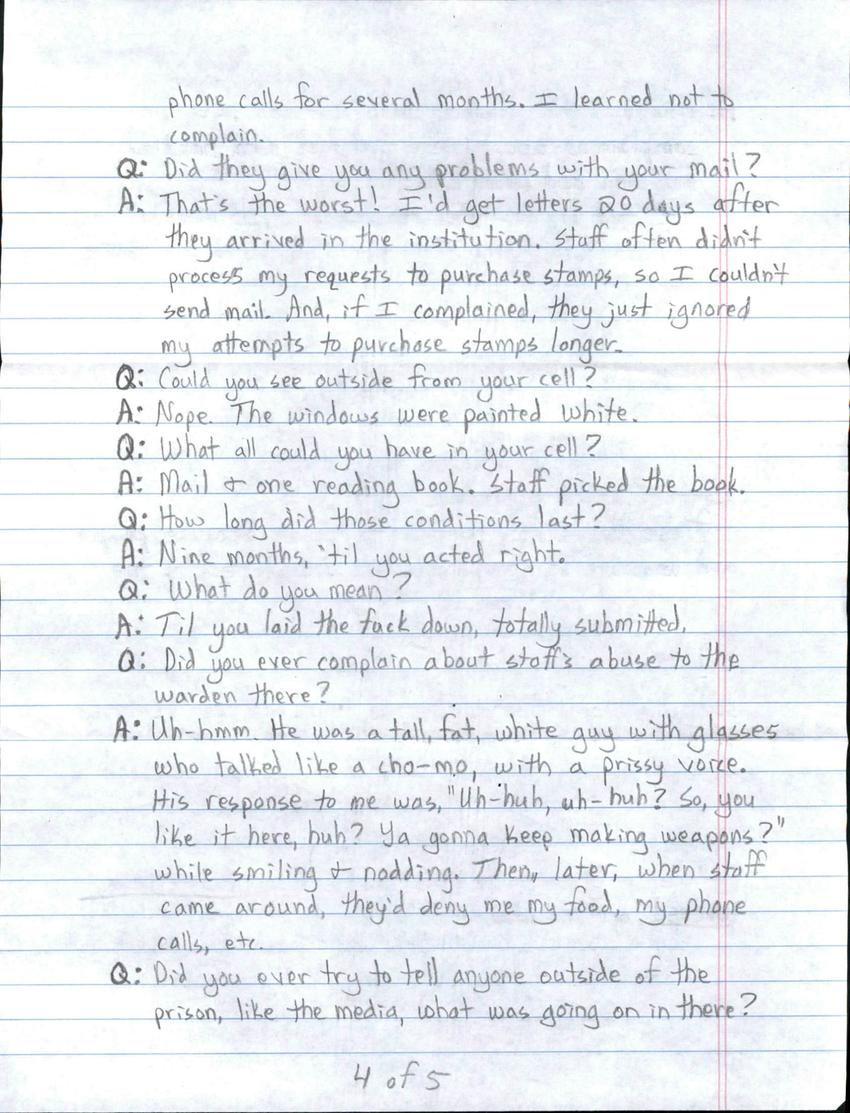 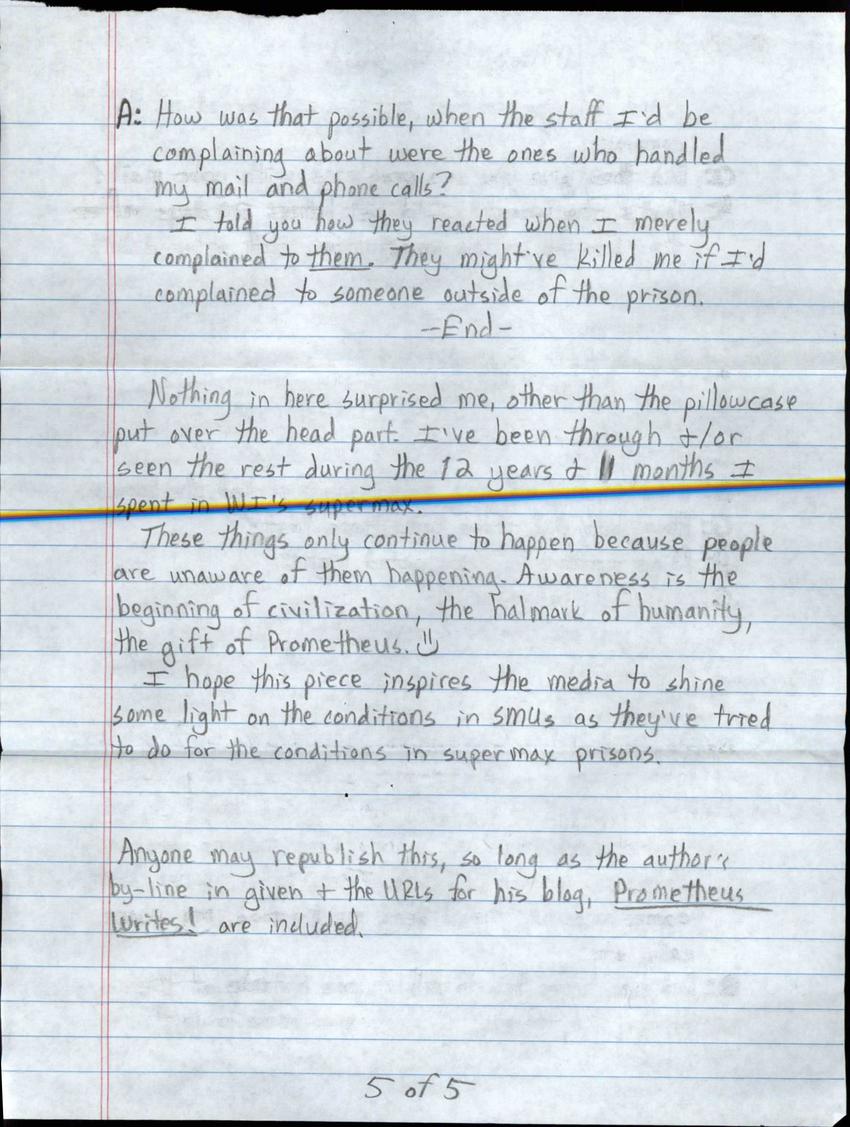 Behold the SMU
by Nate A. Lindell

In the federal and state prison systems, the focus of human-rights activists' attention is on supermax prisons, black holes that are notorious for denying activists and even journalists full access to their grounds, their captives, and their operations.

While some state supermaxes, such as Tamms in Illinois, have shut down, the federal supermax in Florence, Colorado, known as the ADX, is still running strong. The attention on supermaxes has, unfortunately, distracted activists and journalists from the torture that regularity occurs in plain old segregation units, and, in the federal prison system, in the Special Management Units (SMU, pronounced "smoo").

SMU units are specifically designed to shatter the wills of prisoners whom the administration feels threatened by. Staff do not let the constitution nor other laws stand in the way of this goal, which begs the question, "Why does the system only apply its laws to those not part of it?" and, "How can such law enforcement be true justice?"

Here's my interview with a cellie [cell mate] I had, who was in the SMU in Lewisburg USP [United States Penitentiary]. He wishes to remain anonymous, yet I will provide his identity to serious journalists.

Q: What was the reason they gave for sending you to the SMU?
A: Possession and manufacturing of weapons. I had some knives and my cellie, Jeremy Nelson, cooperated so that he wouldn't be sent.

Q: Were you in a gang or something?
A: That I'll never confess. The Administration thought I was and that's why they referred me.

Q: Can you tell us what it was like when you entered the SMU? How staff treated you?
A: They treated me like shit, like an Arab terrorist. I was stripped, given a see-through blue jumpsuit and put in a one-man cell with absolutely nothing. Staff interrogated me, asking me how I felt towards staff, pedophiles, the government, the president. Then shrinks saw me, asked me how I felt, what triggered me to be violent, warned me that staff were going to test me to find out what triggered me and told me to remain calm.

When staff denied me food, at first, I'd complain. But all staff did was deny me something else, too.

Q: Did staff ever beat you when you didn't present a threat to anyone?
A: Of course! What they'd do is cuff me up and bend the cuffs to the point that I couldn't help but scream and writhe, then yell "stop resisting!" and then pile on me and pry on my limbs, causing so much pain I couldn't do nothing but buck. Then they'd choke me, hold my eyelids open while macing me in my face, then strap me to a chair because they said I kept resisting. Sometimes they put a pillowcase over my head and beat me, so I couldn't see who did it. They'd put a magnetized cover over the cell's door window, so no one can see what's going on.

Q: How was the food?
A: Shitty. No seasoning. No vegetables. Overcooked or undercooked. Always cold. Always old. Brocoli was stalks, but it's like that in all prisons. I lost about 20 pounds when I first arrived. The food gets more tolerable when you move to other tiers/wings.

Q: How many calls did you get?
A: Once a month, if staff are in a good mood. More than once I made the mistake of complaining about not getting a phone call, resulting in staff denying me phone calls for several months. I learned not to complain.

Q: Did they get any problems with your mail?
A: That's the worst! I'd get letters 20 days after they arrived in the institution. Staff often didn't process my requests to purchase stamps, so I couldn't send mail. And, if I complained, they just ignored my attempts to purchase stamps longer.

Q: Could you see outside your cell?
A: Nope. The windows were painted white.

Q: What all could you have in your cell?
A: Mail and one reading book. Staff picked the book.

Q: How long did these conditions last?
A: Nine months, 'til you acted right.

Q: What do you mean?
A: 'Til you laid the fuck down, totally submitted.

Q: Did you ever complain about staff's abuse to the warden there?
A: Uh-hmm [sound of confirmation]. He was a tall, fat, white guy with glasses who talked like a cho-man, with a prissy voice. His response to me was, "Uh-huh, uh-huh? So, you like it here, huh? Ya gonna keep making weapons?" while smiling and nodding. Then, later, when staff came around, they'd deny me my food, my phone calls, etc.

Q: Did you ever try to tell anyone outside of the prison, like the media, what was going on in there?
A: How was that possible, when the staff I'd be complaining about were the ones who handled my mail and telephone calls?

I told you how they reacted when I merely complained to them. They might've killed me if I'd complained to someone outside of the prison.

Nothing in here surprised me, other than the pillowcase put over the head part. I've been through and/or seen the rest during the 12 years and 11 months I spent in WI's supermax.

These things only continue to happen because people are unaware of them happening. Awareness is the beginning of civilization, the hallmark of humanity, the gift of Prometheus. :)

Anyone may republish this, so long as the author's by-line is given and the URL for his blog, Prometheus Writes! are included.

Hi~ I replied to something else but it disappeared. I'm probably legally blind though. I'm going to help you out of this mess. I will visit you no matter where you go. Don't worry about that. I haven't for a reason that has nothing to do with you. I am going to call Lockett in the morning. I am swamped with various things right now but I care about you so will never forget about you. They would not be bright to harm you. I miss talking to you. thank you so much for being such a great friend. Talk soon.