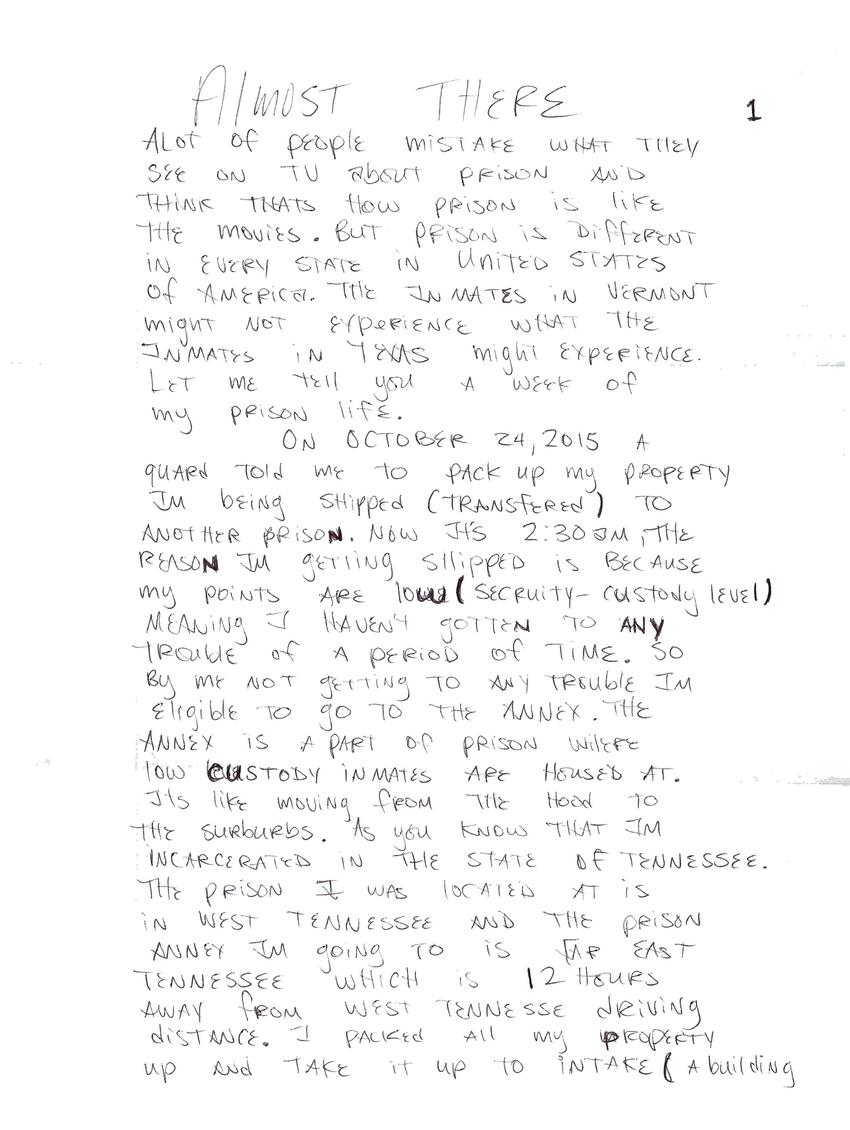 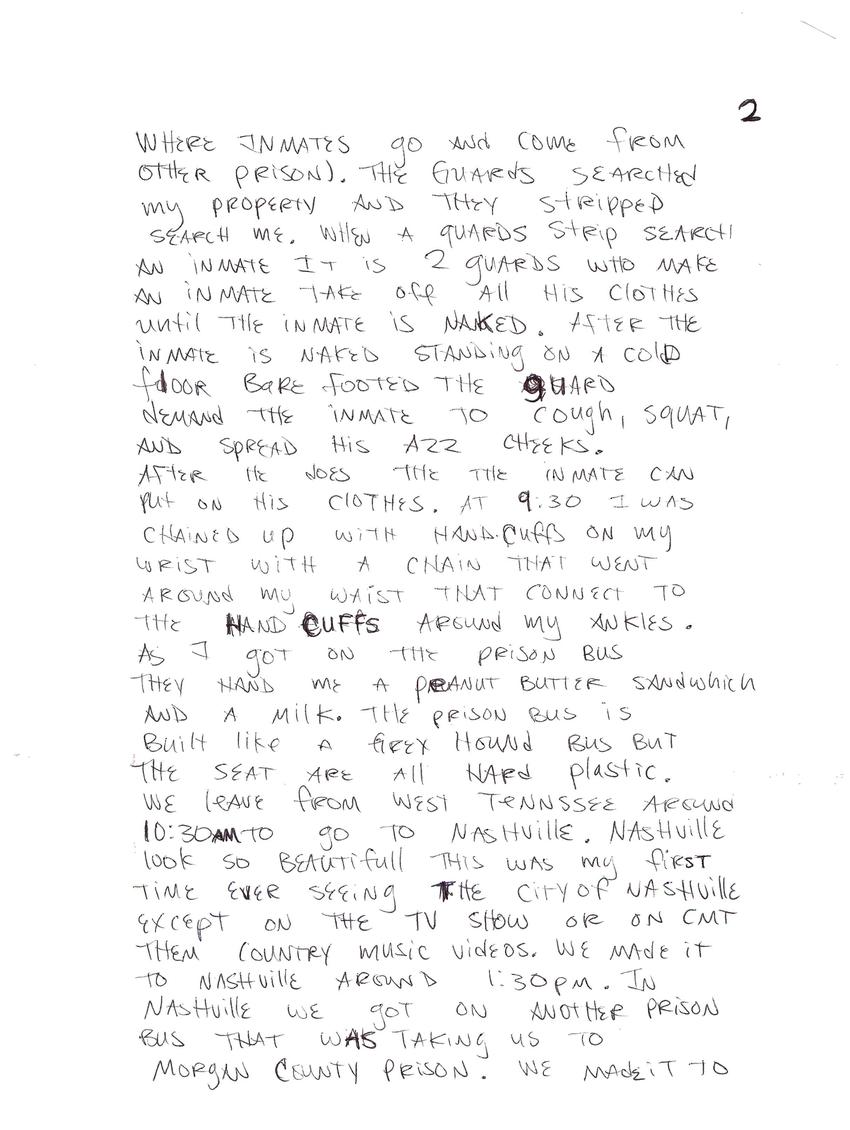 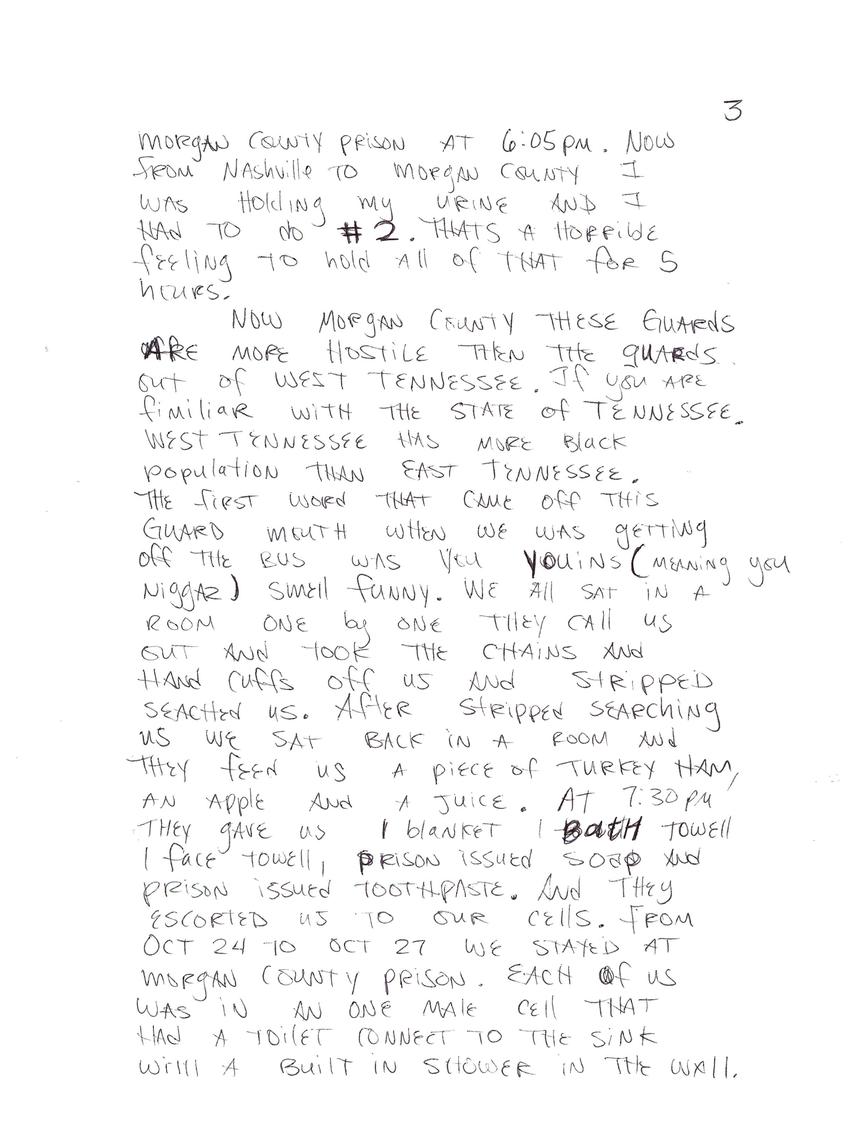 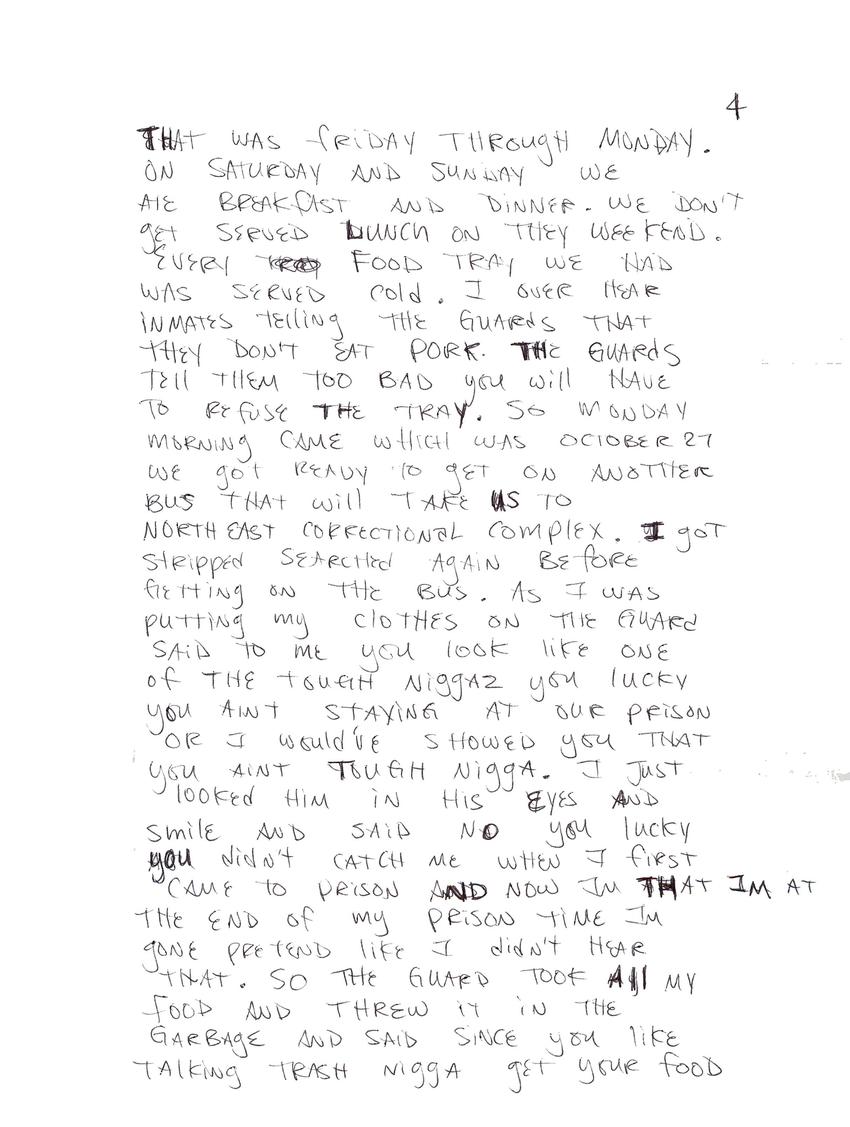 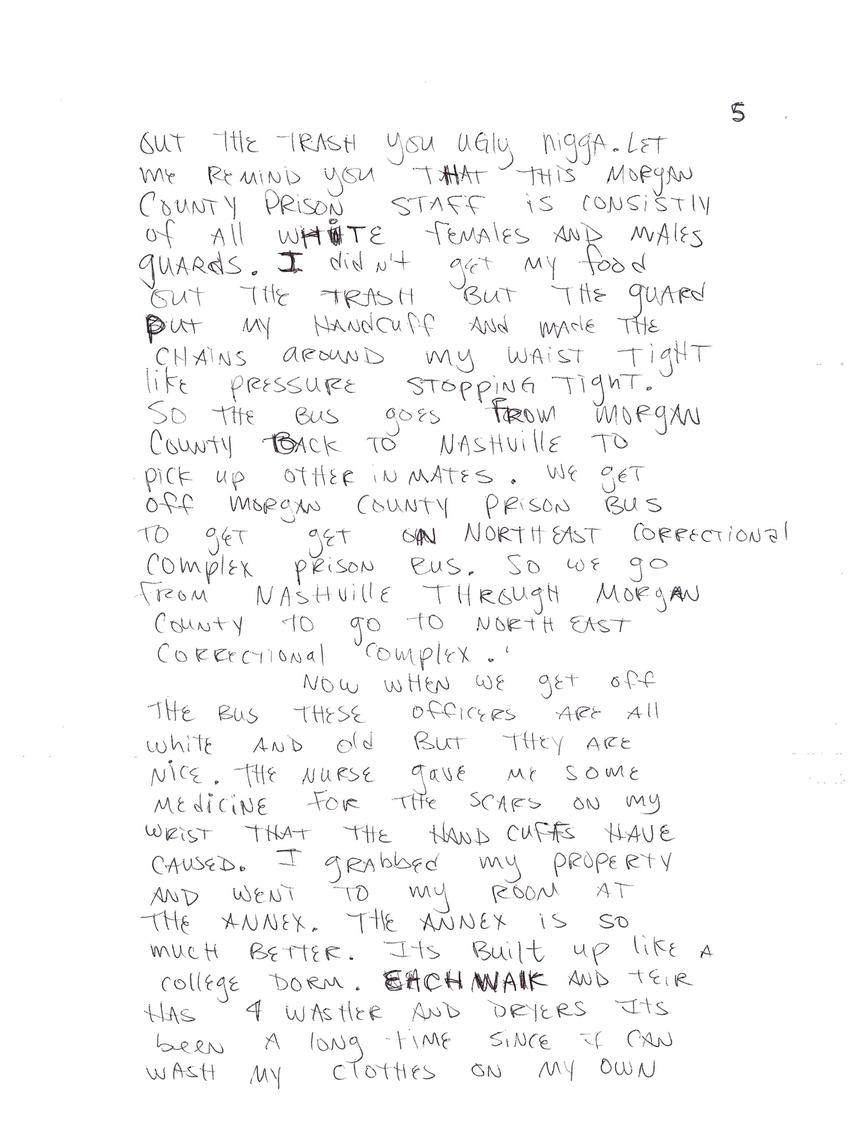 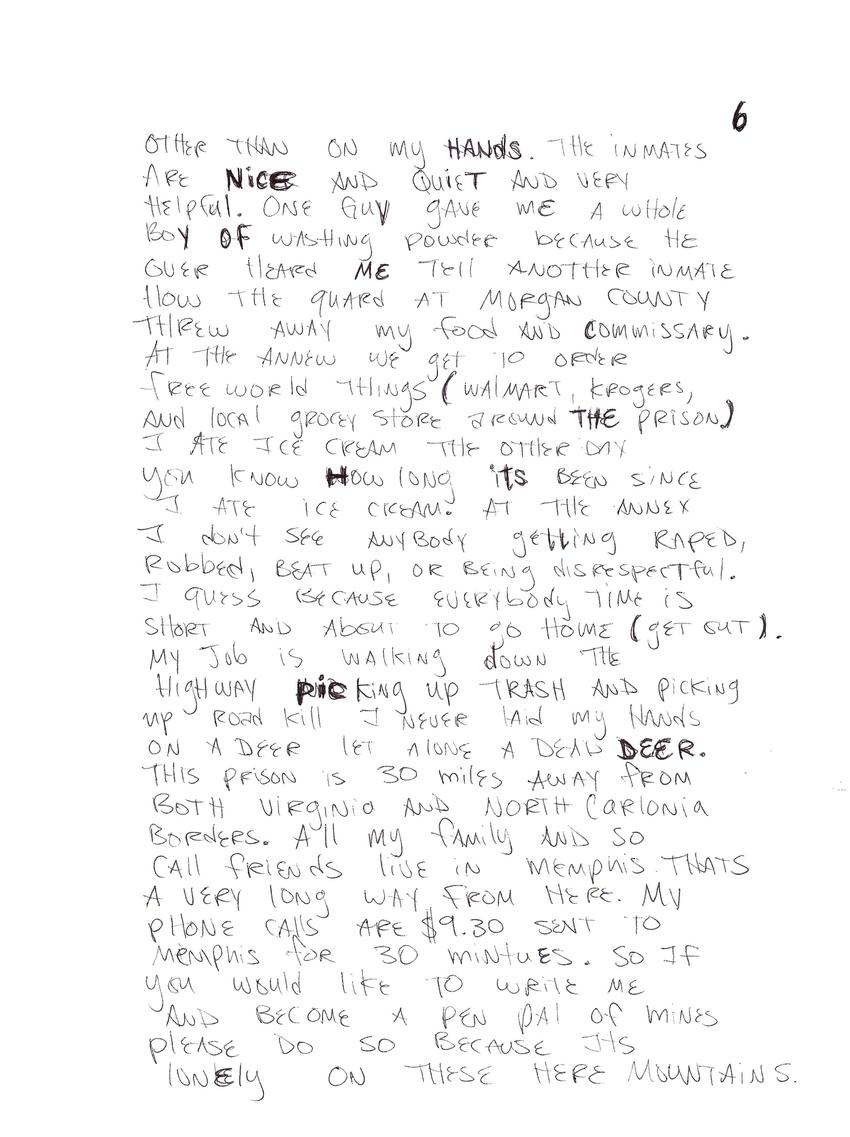 A lot of people mistake what they see on TV about prison and think that's how prison is like from the movies. But prison is different in every state in United States of America. The inmates in Vermont might not experience what the inmates in Texas might experience. Let me tell you a week of my prison life.

On October 24, 2015 a guard told me to pack up my property - I'm being shipped (transferred) to another prison. Now it's 2.30 AM, the reason I'm getting shipped is because my points are low (security - custody level), meaning I haven't gotten into any trouble for a period of time. So by me not getting into any trouble, I'm eligible to go to the Annex. The Annex is a part of prison where low custody inmates are housed at. It's like moving from the Hood to the Suburbs. As you know, I'm incarcerated int he state of Tennessee. The prison I was located at is in West Tennessee and the prison Annex I'm going to is Far East Tennessee which is 12 hours drive away from West Tennessee. I packed all my property up and took it up to intake (a building where inmates come and go from other prisons). The guards searched my property and they strip-searched med. When a guard strip-searches an inmate, 2 guards make an inmate take off all his clothes until the inmate is naked. After the inmate is naked standing barefooted on a cold floor, the guard demands the inmate to cough, squat and spread his ass cheeks. After he does this, the inmate can put on his clothes. At 9.30 I was chained up with handcuffs on my wrist with a chain that went around my waist that connected to the handcuffs around my ankles.
As I got on the prison bus, they handed me a peanut butter sandwich and milk. The prison bus is built like a Greyhound bus but the seats are all hard plastic. We leave from West Tennessee around 10.30AM to go to Nashville. Nashville looked so beautiful. This was my first time ever seeing the city of Nashville except on TV shows or on CMT - them country music videos. We made it to Nashville around 1.30PM. In Nashville we got on another prison bus that was taking us to Morgan County Prison. We made it to Morgan County Prison at 6.05PM. Now from Nashville to Morgan COunty I was holding my urine and I had to do #2. That's a horrible feeling to hold all of that for 5 hours.

Now in Morgan County these guards are more hostile then the guards out of West Tennessee. If you are familiar with the state of Tennessee, West Tennessee has more black population than East Tennessee. The first word that came off this guard's mouth when we were getting off the bus was "You Youins (meaning you niggaz) smell funny". We all sat in a room one by one. They called us out and took the chains and handcuffs off us and strip-searched us. After strip-searching us, we sat back in a room and they fed us a piece of turkey ham, an apple and a juice. At 7.30PM they gave us 1 blanket, 1 bath towel, 1 face towel, prison-issued soap and prison-issued toothpaste. And they escorted us to our cells. From Oct 24 to Oct 27 we stayed at Morgan County Prison. Each of us was in one male cell that had a toilet connected to to the sink with a built-in shower in the wall.

That was Friday through Monday. On Saturday and Sunday we ate breakfast and dinner. We don't get served lunch on the weekends. Every food tray we had was served cold. I overheard inmates telling the guards that they don't eat pork. The guards told them "too bad. You will have to refuse the tray." So Monday morning came which was October 27, we got ready to get on another bus that will take us to the North East Correctional Complex. I got strip-searched again before getting on the bus. As I was putting my clothes on, the guard said to me, "You look like one of the tough niggaz. You lucky you ain't staying at our prison or I would've showed you that you ain't tough, nigga." I just looked him in his eyes and smiled and said, "No, you lucky you didn't catch me when I first came to prison and now that I'm at the end of my prison time, I'm gonna pretend like I didn't hear that." So the guard took all my food and threw it in the garbage and said, "Since you like talking trash, nigga, get your food out the trash. You ugly nigga." Let me remind you that this Morgan County Prison staff consists of all white female and male guards. I didn't get my food out the trash but the guard put my handcuffs and made the chains around my wrist tight, like pressure-stopping tight.
So the bus goes from Morgan County back to Nashville to pick up other inmates. We get off Morgan County Prison bus to get on the North East Correctional Complex prison bus. So we go from Nashville through Morgan County to go to the North East Correctional Complex.

Now when we get off the bus, these officers are all white and old but they are nice. The nurse gave me some medicine for the scars on my wrist that the handcuffs have caused. I grabbed my property and went to my room at the Annex. The Annex is so much better. It's built up like a college dorm. Each Walk and there are 4 washers and dryers. It's been a long time since I can wash my clothes on my own other than on my hands. The inmates are nice and quiet and very helpful. One guy gave me a whole box of washing powder because he overheard me tell another inmate how the guard at Morgan County threw away my food and commissary.
At the Annex we get to order Free World things (Walmart, Krogers and local grocery store around the prison). I ate ice cream the other day. You know how long it's been since I ate ice cream? At the Annex I don't see anybody getting raped, robbed, beat up or being disrespectful. I guess because everybody's time is short and about to go home (get out). My job is to walk down the highway picking up trash and picking up roadkill. I never laid my hands on a deer, let alone a dead deer.
This prison is 30 miles away from both Virginia and North Carolina borders. All my family and so-called friends live in Memphis. That's a very long way from here. My phone calls are $9.30 sent to Memphis for 30 minutes. So if you would like to write me and become a pen pal of mine, please do so because it's lonely on these here mountains.
Remember I'm in a State Penitentiary, not a Federal Penitentiary so we don't have emails like the federal prisoners have. Please write me at
Antonio Dowdy 453855
North East Correctional Complex
P.O. Box 5000
Mountain City, TN 37683

Almost there young bro,you're almost there....This is
Earnest,from Raleigh.I stayed across from Alex.You would come over from time, to time to talk to me.
Soon you will never have to experience any of this ever again. And you can have all the ice cream you want. I love to read what you have written you need to do some more. Tonya