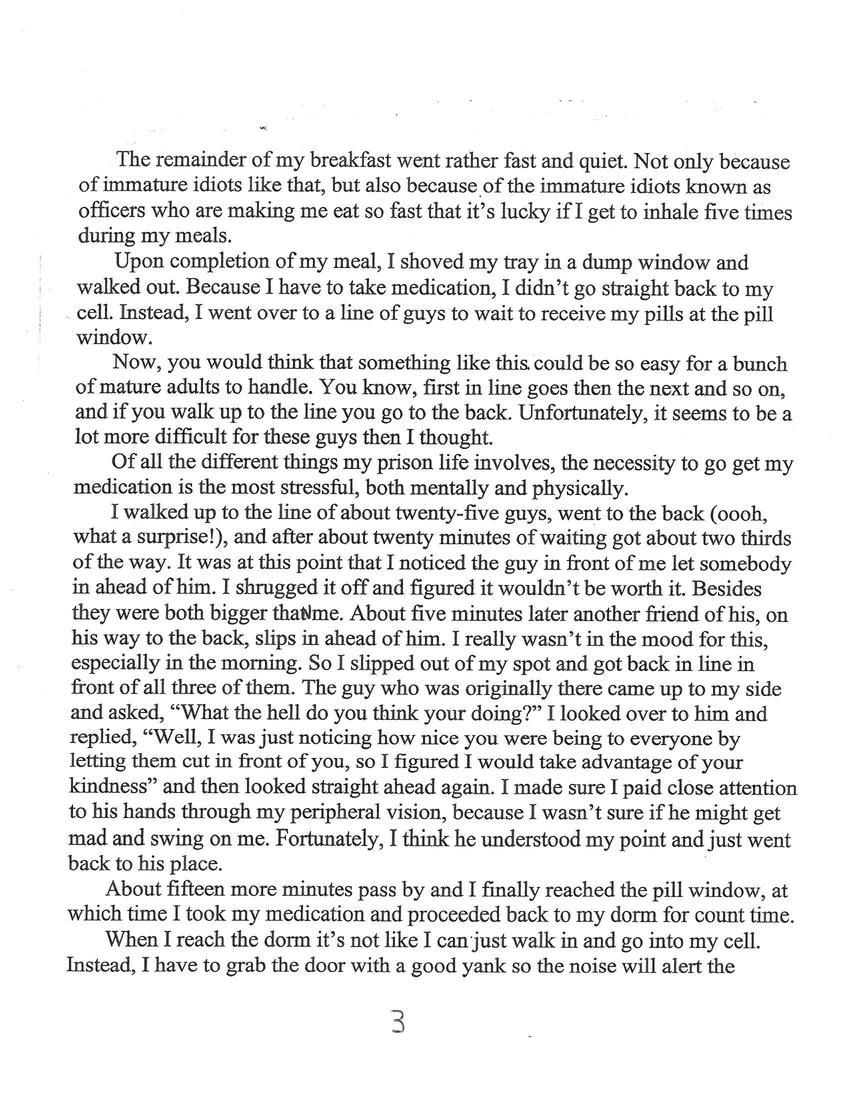 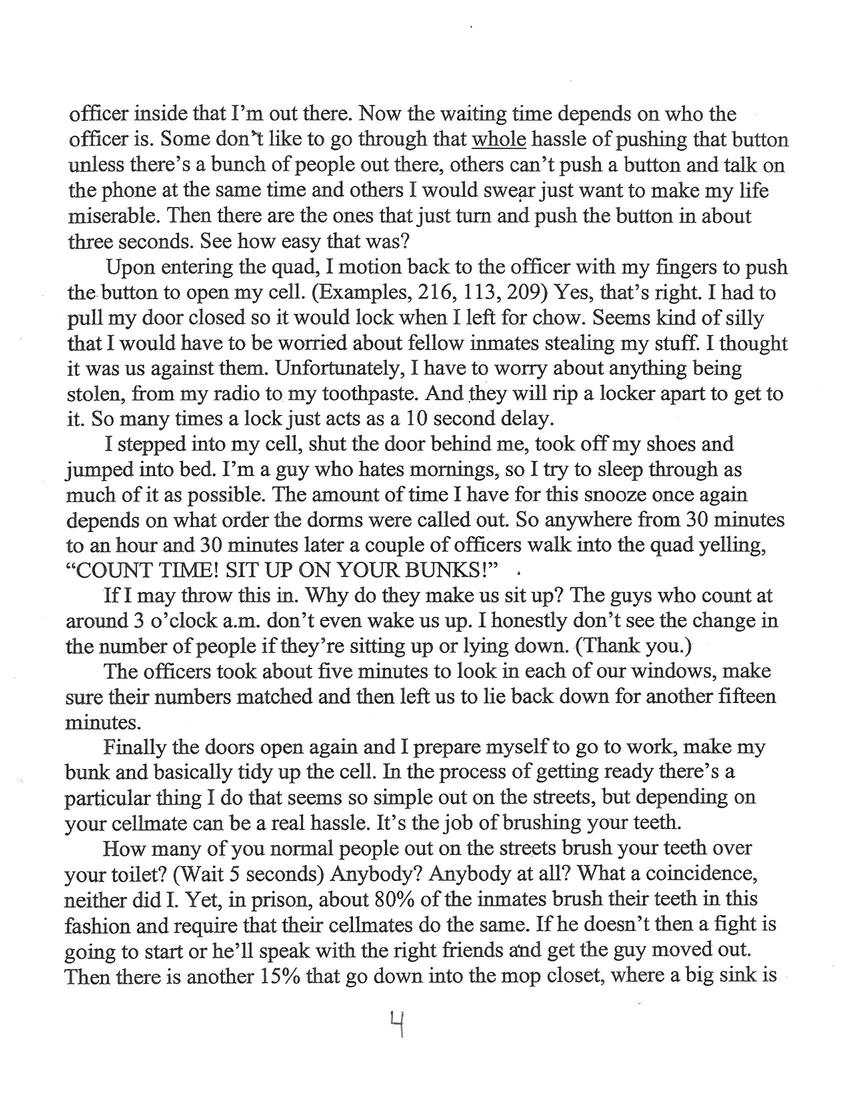 The remainder of my breakfast went rather fast and quiet. Not only because of immature idiots like that, but also because of the immature idiots known as officers who are making me eat so fast that it's lucky if I get to inhale give times during my meals.

Upon completion of my meal, I shoved my tray in a dump window and walked out. Because I have to take medication, I didn't go straight back to my cell. Instead, I went over to a line of guys to wait to receive my pills at the pill window.

Now, you would think that something like this could be so easy for a bunch of mature adults to handle. You know, first in line goes then the next and so on, and if you walk up to the line you go to the back. Unfortunately, it seems to be a lot more difficult for these guys then I thought.

Of all the different things my prison life involves, the necessity to go get my medication is the most stressful, both mentally and physically.

I walked up to the line of about twenty-five guys, went to the back (oooh, what a surprise!), and after about twenty minutes of waiting got about two thirds of the way. It was at this point that I noticed the guy in front of me let somebody in ahead of him. I shrugged it off and figured it wouldn't be worth it. Besides they were both bigger than me. About five minutes later another friend of his, on his way to the back, slips in ahead of him. I wasn't really in the mood for this, especially in the morning. So I slipped out of my spot and got back in line in front of all three of them. The guy who was originally there came up to my side and asked, "What the hell do you think you're doing?" I looked over to him and replied, "Well, I was just noticing how nice you were being to everyone by letting them cut in front of you, so I figured I would take advantage of your kindness" and then looked straight ahead again. I made sure I paid close attention to his hands through my peripheral vision, because I wasn't sure if he might get mad and swing on me. Fortunately, I think he understood my point and just went back to his place.

About ﬁfteen more minutes pass by and I ﬁnally reached the pill window, at which time I took my medication and proceeded back to my dorm for count time. When I reach the dorm it’s not like I canjust walk in and go into my cell. Instead, I have to grab the door with a good yank so the noise will alert the officer inside that I'm out there. Now the waiting time depends on who the officer is. Some don't like to go through that whole hassle of pushing that button unless there's a bunch of people out there, others can't push a button and talk on the phone at the same time and others I would swear just want to make my life miserable. Then there are the ones that just turn and push the button in about three seconds. See how easy that was?

Upon entering the quad, I motion back to the officer with my fingers to push the button to open my cell. (Examples, 216, 113, 209) Yes, that's right. I had to pull my door closed so it would lock when I left for chow. Seems kind of silly that I would have to be worried about fellow inmates stealing my stuff. I thought it was us against them. Unfortunately, I have to worry about anything being stolen, from my radio to my toothpaste. And they will rip a locker apart to get to it. So many times a lock just acts as a 10 second delay.

I stepped into my cell, shut the door behind me, took off my shoes and jumped into bed. I'm a guy who hates mornings, so I try to sleep through as much of it as possible. The amount of time I have for this snooze once again depends on what order the dorms were called out. So anywhere from 30 minutes to an hour and 30 minutes later a couple of officers walk into the quad yelling, “COUNT TIME! SIT UP ON YOUR BUNKS!"

If I may throw this in. Why do they make us sit up? The guys who count at around 3 o'clock a.m. don't even wake us up. I honestly don't see the change in the number of people if they're sitting up or lying down. (Thank you.) The officers took about five minutes to look in each of our windows, make sure their numbers matched and then let us to lie back down for another fifteen minutes.

Finally the doors open again and I prepare myself to go to work, make my bunk and basically tidy up the cell. In the process of getting ready there's a particular thing I do that seems so simple out on the streets, but depending on your cellmate can be a real hassle. It's the job of brushing your teeth. How many of you normal people out on the streets brush your teeth over your toilet? (Wait 5 seconds) Anybody? Anybody at all? What a coincidence, neither did I. Yet, in prison, about 80% of the inmates brush their teeth in this fashion and require that their cellmates do the same. If he doesn't then a fight is going to start or he'll speak with the right friends and get the guy moved out. Then there is another 15% that go down into the mop closet, where a big sink is

Thanks for writing! I finished the transcription for your post. Hope this gets you more viewers from Google (as someone else's transcription helped me find one of your other posts through Google. -- John