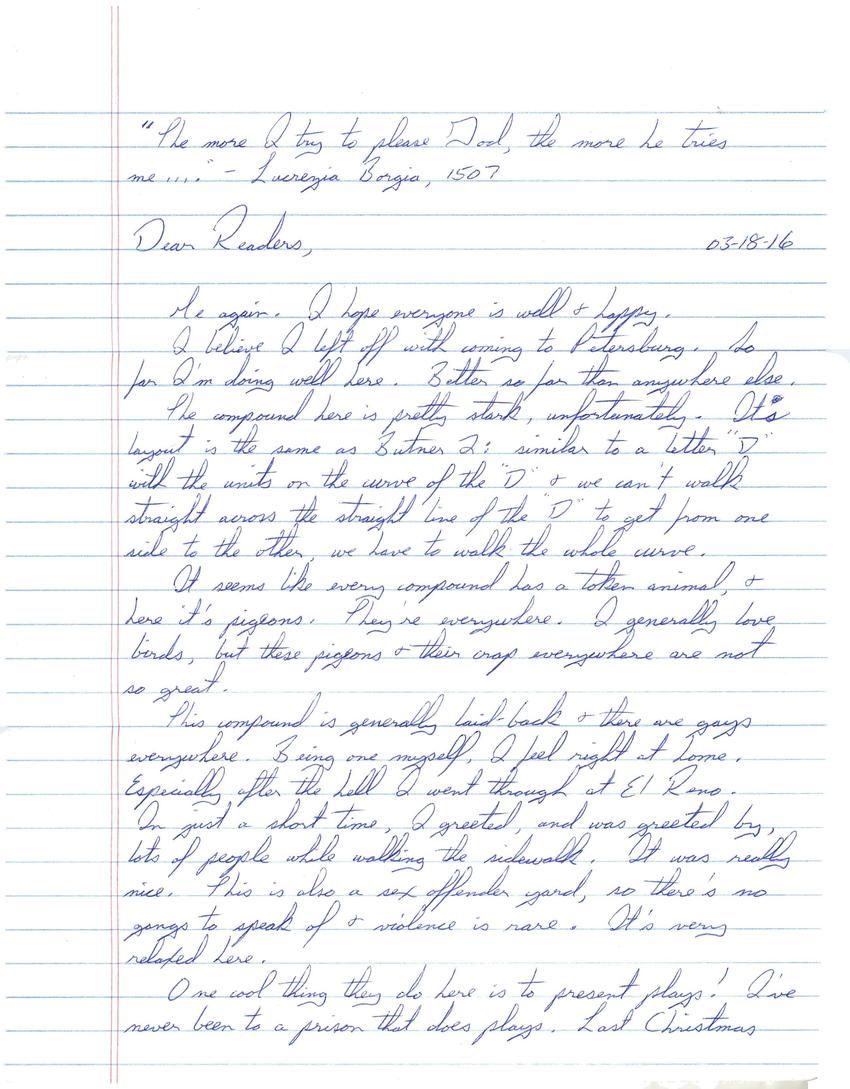 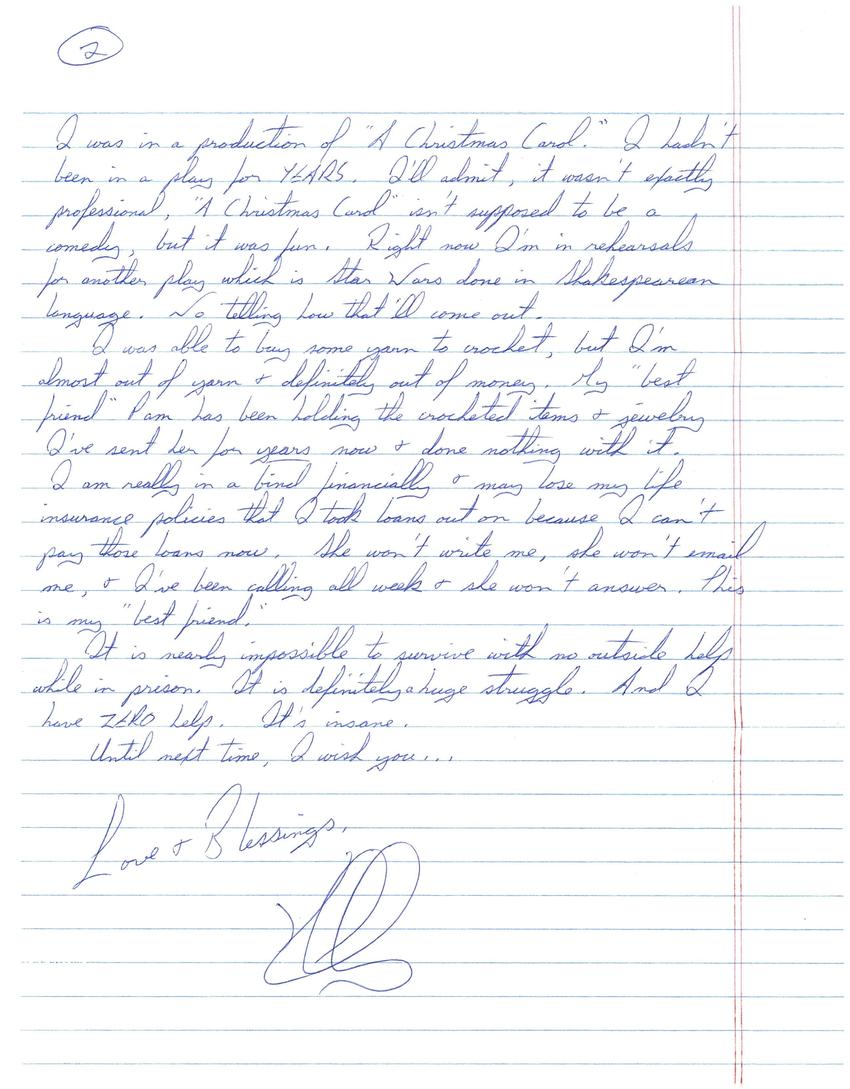 Me again. I hope everyone is well + happy.

I believe I left off with coming to Petersburg. So far I'm doing well here. Better so far than anywhere else.

The compound here is pretty stark, unfortunately. Its layout is the same as Butner 2: similar to the letter "D" with the units on the curve of the "D" + we can't walk straight across the straight line of the "D" to get from one side to the other. We have have to walk the whole curve.

It seems like every compound has a token animal, + here it's pigeons. They're everywhere. I generally love birds, but these pigeons + their crap everywhere are not so great.

This compound is generally laid-back + there are gays everywhere. Being one myself, I feel right at home. Especially after the hell I went through at El Reno. In just a short time, I greeted and was greeted by lots of people while walking the sidewalk. It was really nice. This is also a sex offender yard, so there's no gangs to speak of + violence is rare. It's very relaxed here.

One cool thing they do here is present plays! I've never been to a prison that does plays. Last Christmas I was in a production of "A Christmas Carol." I hadn't been in a play for YEARS. I'll admit, it wasn't exactly professional; "A Christmas Carol" isn't supposed to be a comedy, but it was fun. Right now I'm in rehearsals for another play which is Star Wars done in Shakespearean language. No telling how that'll come out.

I was able to buy some yarn to crochet, but I'm almost out of yarn + definitely out of money. My "best friend" Pam has been holding the crocheted items + jewelery I've sent her for years now + done nothing with it. I am really in a bind financially + may lose my life insurance policies that I took loans out on because I can't pay those loans now. She won't write me, she won't email me, + I've been calling all week + she won't answer. This is my "best friend."

It is nearly impossible to survive with no outside help while in prison. It is definitely a huge struggle. And I have ZERO help. It's insane.

Today Mars,30th I read your blog:sorry for being that late!I felt also relieved you are in a good place!:))You couldn't be placed any better!... Probably you have some friendships over there?
That's so fortunate that you can play in plays!You must have liked that activity!! It's not dance... but it's creative at least.I wondered,are there not many jobs open?
I will try to email Pam again,ok?See if she reacts at all??
See, I send some money to George's dad and he sends his son the money I send. Can't you look out for the address of a friend or a trustful relative who could send you some money I send to him or her? In George's prison my books came back! They were sent in a carton box.. and they don't admit any carton boxes anymore! :((

I got your B-Day card today! Lovely! Thanks!Now that I have your address, I can write you again.I've a new pen pal on this blog, Henry,and he is a Wiccan himself. He looks for a priest in his prison,to lead his group there.He is the person in charge for this group.Nice person; he's 60 now.

George sent me a B-Day card with a pastel watercolor heart, he painted himself! So very beautiful!They replaced him recently on another aisle, I read. Now he can't see his new friend Joshua, 38 anymore...They try now for him to be replaced also.They "both" painted a pretty large watercolor(a portrait) of my parents when they married, from a small photo.It really is so wonderful!! George knows how much I missed my dad in my life. He died when I was 3 and a half.:(
It was meant for my B- Day!I celebrated my birthday at mom's in Brussels!
Did you hear about those attacks from terrorists!!! In our airport Zaventem and in a metro near the European Union?
32 people were killed! More then 200 plus injured people!They tried to kill as many as possible!... People burned,mutilated, still fighting for their lives... It's atrochous!
... 'atrochious'
'March'...;I noted 'mars' like in French!:)

Two bombs were not even used... but they had the attention to do so!Because the taxi couldn't put them all in the trunk. The taxi driver warned the police... He couldn't touch those heavy cases from them!... :o
Also bombs with metal in it..., even chemical stuff was found in an apartment. They caught some men, some were blown up by themselves, but some are still hidden and on the run...
It all happened in Brussels, on March,the 22th...
I was so sad... They won't stop; Europe is under attack...
It feels very unsafe right now.

Anyway.. we have to live in this country.. but it changed forever!:(((

I wrote to your friend, but she didn't write me back. I will search for her note and then tell you here on the blog.
I have a new friend Kathleen and we met on a Musical Performance on the 23 of April. We already had a lot going on with the two of us. She is 48yrs and I'm from '48. ;)))We have similar characters and interests! That's why we match so good together.We also live near to each other. She is divorced and found her soulmate... but she has to share him.He likes three women. To me this sounds complicated though.:)I wouldn't share my mate.George wouldn't either... Well, she can hug as many times as she likes... i can't. :( But I travel on the 22nd of June to Amerika -we celebrate his B-Day on the 28th; he turns 67- and I will be there till the 9th of July.6 day visit in June and 6 visits in July.Oh, I received the 6 hrs visit/day!!!I fly to Milwaukee, WI and there the dad of George and the chofer(?) John picks me up.He has to drive more then 5 hours at least! :o
My first 4hr day is the 23 of June. :)I will arrive the 22nd and stay one night near the airport of Milwaukee. 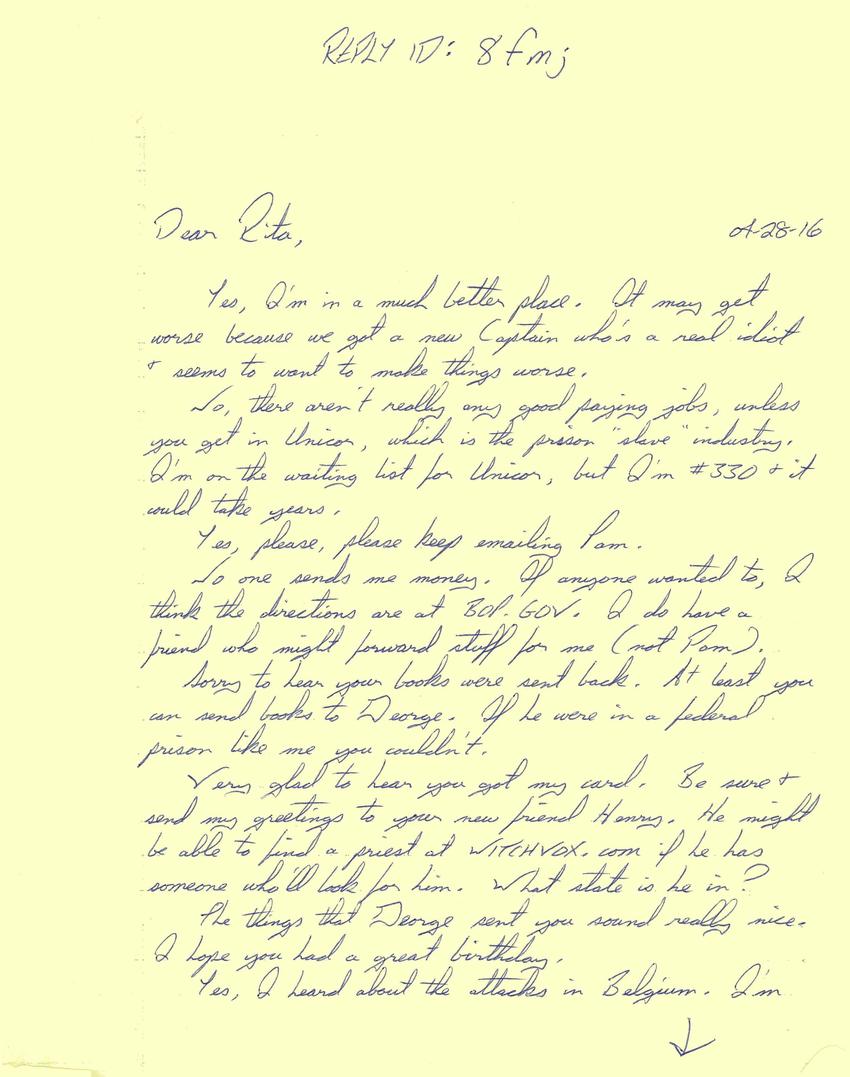 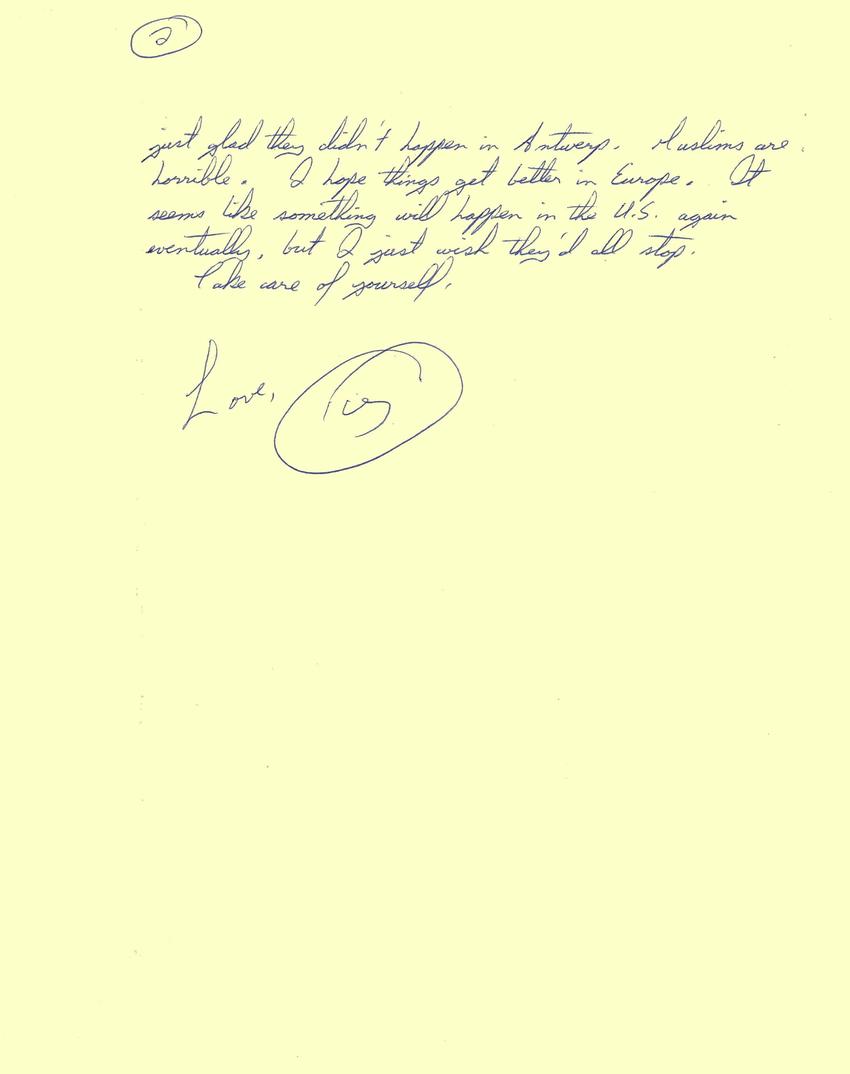 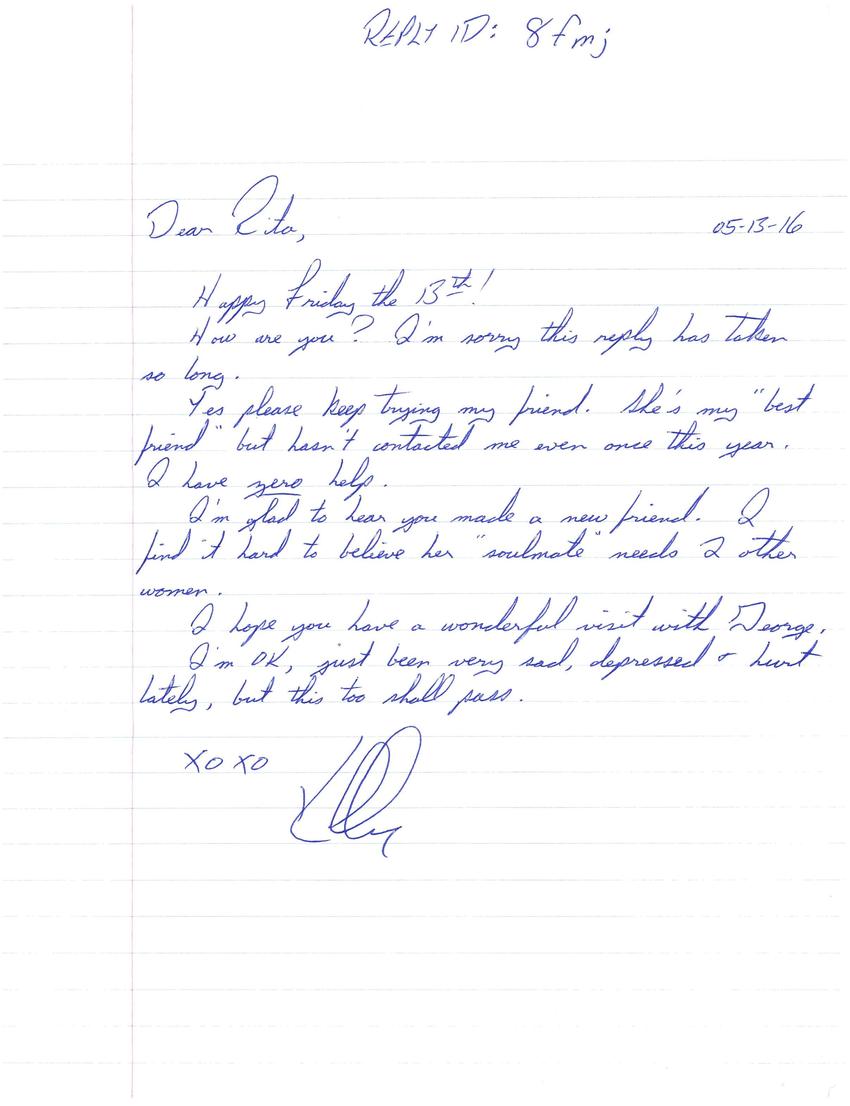 It's been a while you wrote this,I assume?As it dates from the month of May.You should have this mail today, Monday 11th.
So,tell me WHEN you got it,ok?
On the blog it shows you've VERY many adds.. yes?
Came home yesterday and I am sleeping!!!having my famous jetlag!;)I do when my body asks me,haha
Kelly,I had a very bad experience in the States,tell you why.At first I'll take a test here to see if my password still works,ok?
Well,I found it; as I changed passwords lately!
I couldn't get in my own email in Mt Sterling where I was at!Something with the changed password,I guess?They thought I was hacking;I just could not reach the most of my friends!Only those I remembered and I made a new email address too.
Here I see now that they prevented a hacking person in Mt Sterling, but it was me!I did work at it!,but to no avail.:(
What's worse!!I arrived on the 22 of June and George's dad and John picked me up at the airport of Milwaukee; that was easy.They brought me to a motel room for one night; close to his apartment in Kenosha.The next morning there was a LOT of miles to drive to my hotel in Mt Sterling,close to George's prison.We left real early and took a breakfast on our way heading there.That particular day we would have had only 4 hrs, but that was still ok.Rushing in we heard I had to register in the morning!But then we heard the news: He was in segregation!I learned I had only twice a month to see him: 2 times ONE hour per month!!For June and July made ONLY 4 visits for ONE HOUR!!!I was so grieved... and I traveled from that far!:(
I had had the 6hr extended visits: 6 for each month!His dad and me went in the next morning and saw his son behind glass.. cuffed at hands and one foot. :( So very sad, Kelly!We couldn't even touch and it is still going on.He is there since the 17th of June; later we heard it could take up to a month and in the worst case to 6 months!!
This Wednesday Internal Affairs would tell what's what,and he might even transferred!(?)He did see nobody yet, and I told his lawyer, and 2 high ranking people who could possibly help? They couldn't. WHY, you'll ask? To have received a Newsletter(a socialistic activism paper he got ALL THE TIME!And why did they then let it come in in the first place!he was put another time in SEG by the same warden;a man causing all of this; so sad...
I will only see him at first time maybe in April?But Leslie expects me in the summer to watch their children when they have summer vacation.It's less costly in April of course. And twice is even more!They bought a house in San Diego.I also gave a donation,as to my other daughter as well.(!)
I wondered what happened to you,Kelly?So, write me. 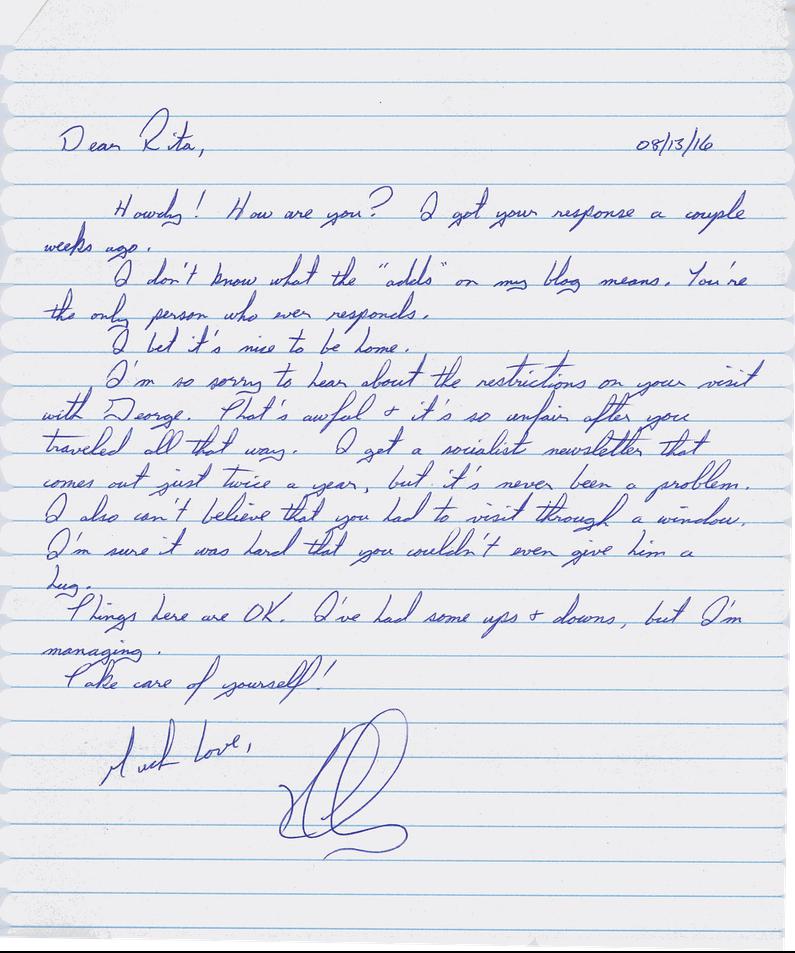