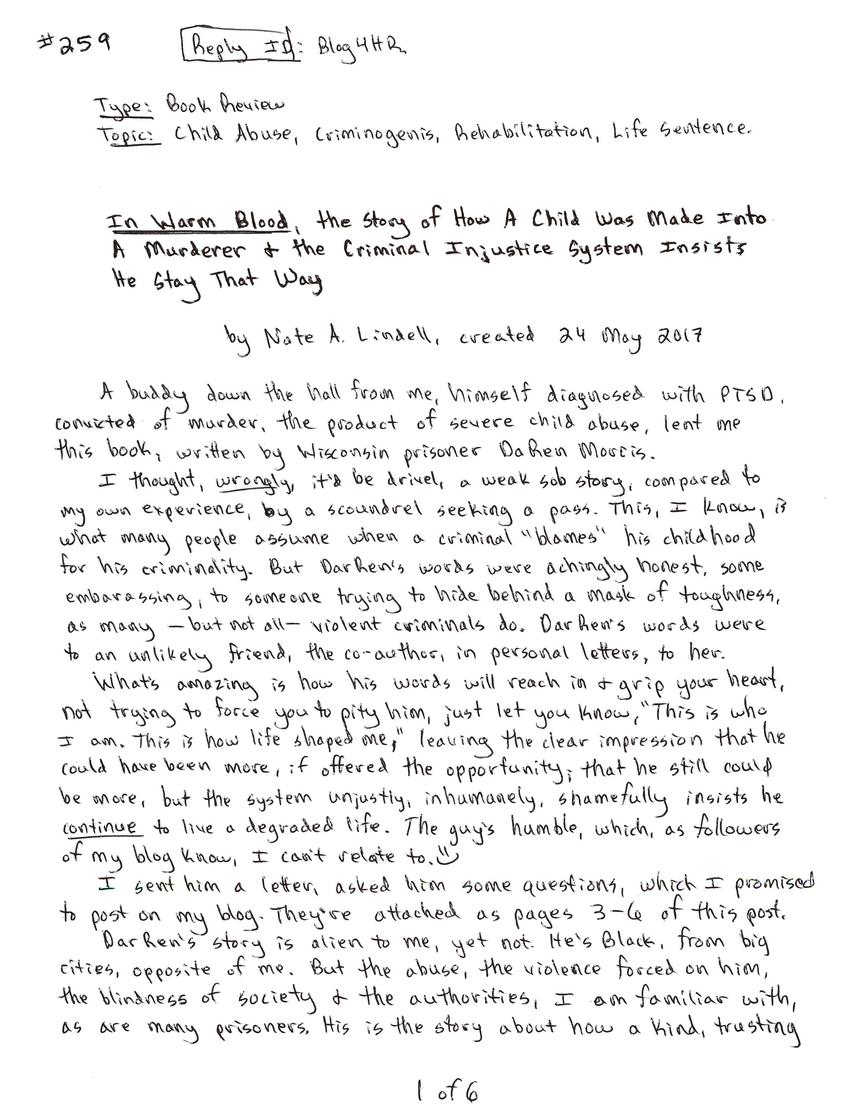 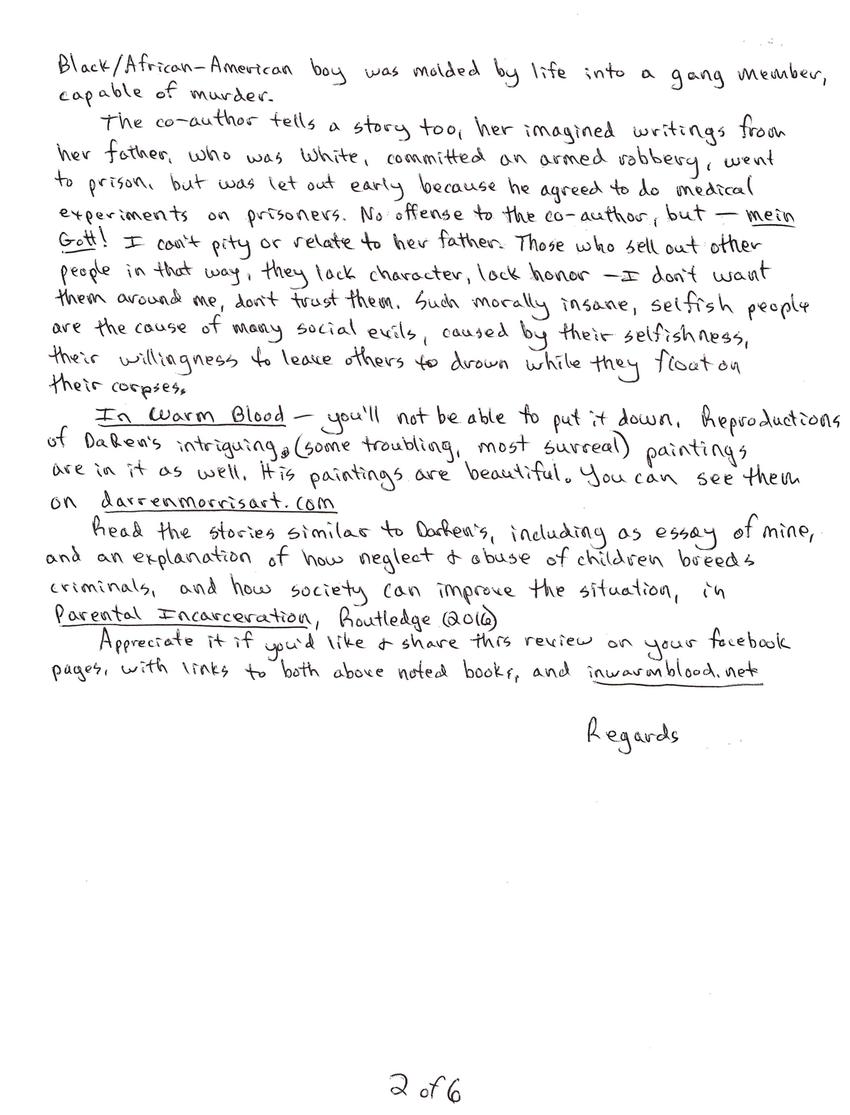 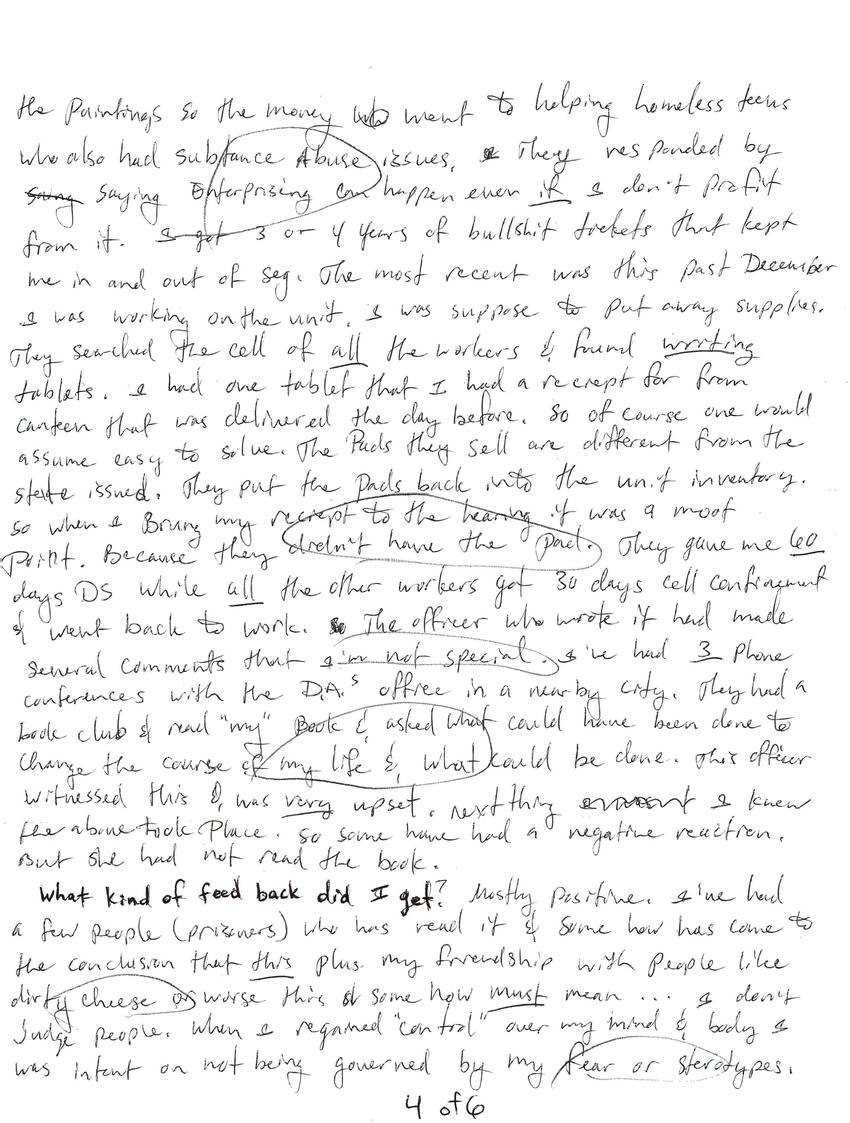 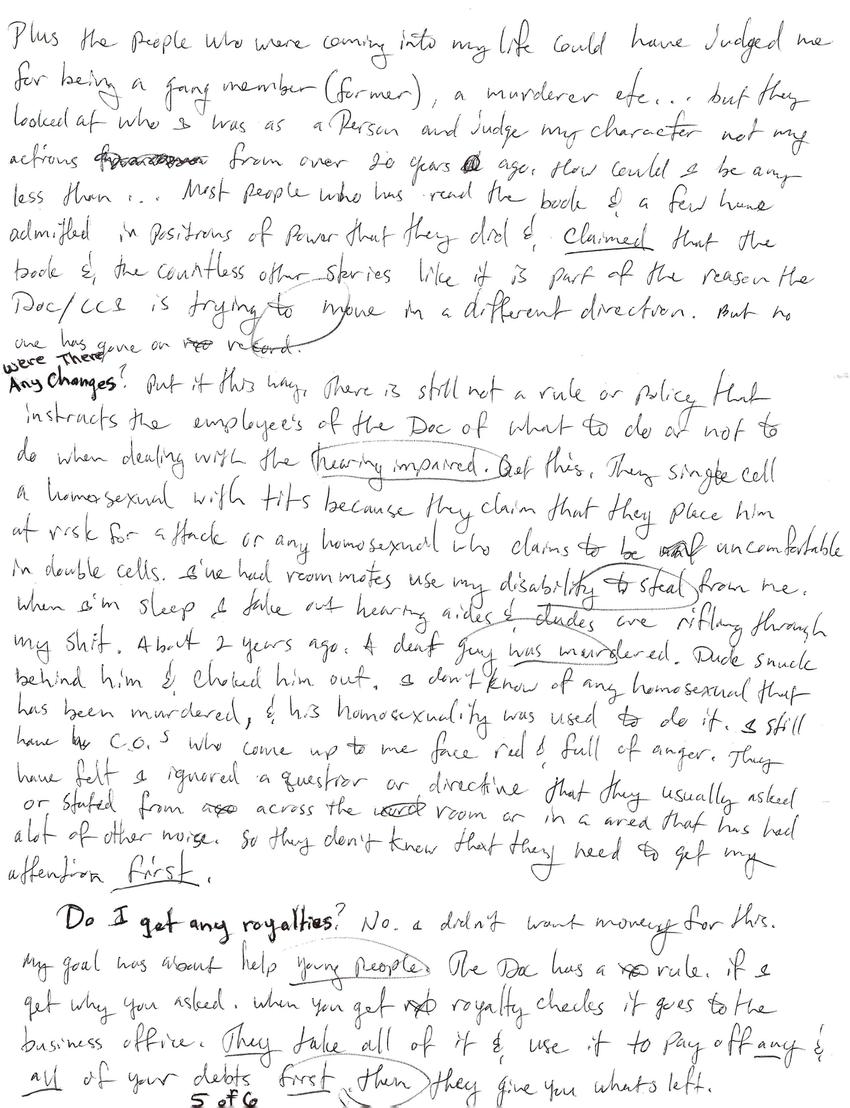 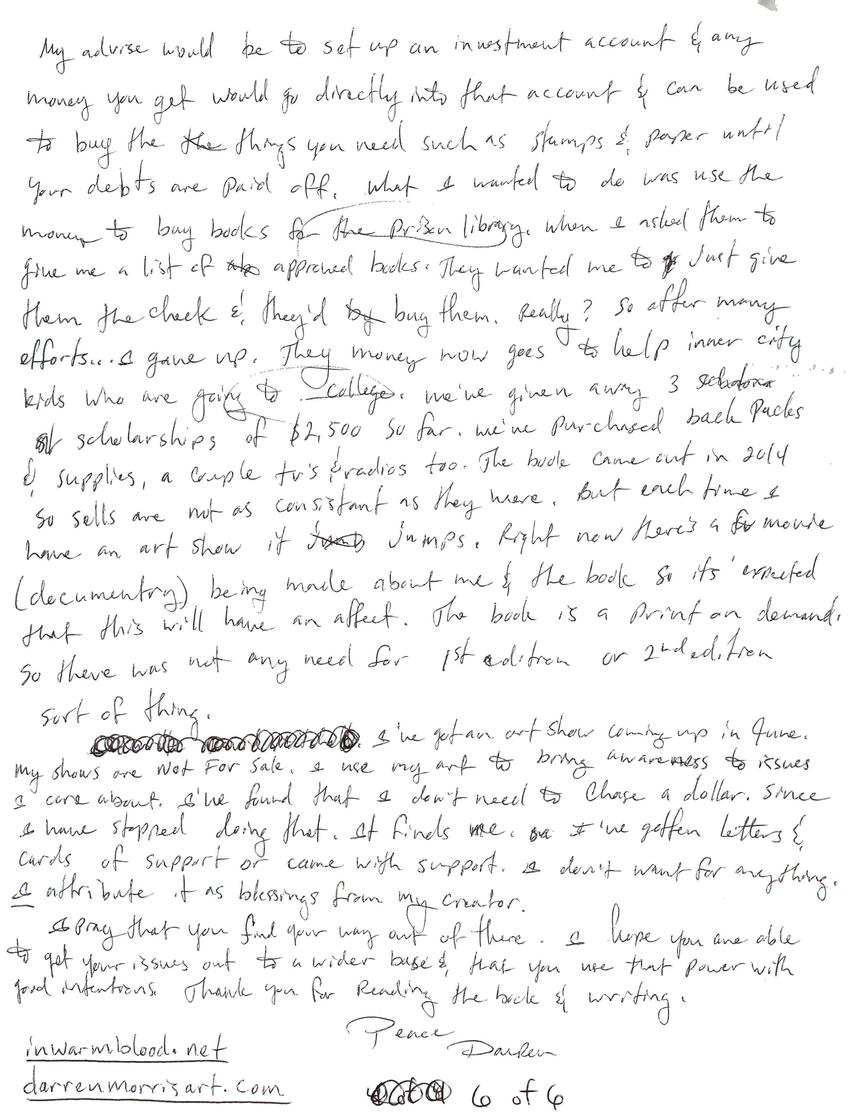 In Warm Blood, the story of How A Child Was Made Into A Murdered & the Criminal Injustice System Insists He Stay That Way

A buddy down the hall from me, himself diagnosed with PTSD, convicted of murder, the product of severe child abuse, lent me this book, written by Wisconsin prisoner DaRen Morris.
I though, wrongly, it'd be drivel, a weak sob story, compared to my own experience, by a scoundrel seeking a pass. This, I know, is what many people assume when a criminal "blames" his childhood for his criminality. But DarRen's words were achingly honest, some embarrassing, to someone trying to hide behind a mask of toughness, as many - but not all - violent criminals do. DarRen's words were to an unlikely friend, the co-author, in person letters, to her.
What's amazing is how his words will reach in & grip your heart, not trying to force you to pity him, just let you know, "This is who I am. This is how life shaped me," leaving the clear impression that he could have been more, if offered the opportunity; that he still could be more, but the system unjustly, inhumanely, shamefully insists he continue to live a degraded life. The guy's humble, which, as followers of my blog know, I can't relate to.
I sent him a letter, asked him some questions, which I promised to post on my blog. They're attached as pages 3-6 of this post.
DarRen's story is alien to me, yet not. He's Black, from big cities, opposite me. But the abuse, the violence forced on him, the blindness of society & the authorities, I am familiar with, as are many prisoners. His is the story about how a kind, trusting Black/African-American boy was moulded by life into a gang member, capable of murder.
The co-author tells a story too, her imagined writings from her father, who was white, committed an armed robbery, went to prison, but was let out early because he agreed to do medical experiments on prisoners. No offense to the co-author, but - mein Gott! I can't pity or relate to her father. Those who sell out other people in that way, they lack character, lack honor - I don't want them around me, don't trust them. Such morally insane, selfish people are the cause of many social evils, caused by their selfishness, their willingness to leave others to drown while they float on their corpses.
In Warm Blood - you'll not be able to put it down. Reproductions of DaRen's intriguing (some troubling, most surreal) paintings are in it as well. His painting are beautiful. You can see them on darrenmorrisart.com
Read the stories similar to DarRen's, including an essay of mine, and an explanation of how neglect & abuse of children breeds criminals, and how society can improve the situation, in Parental Incarceration, Routledge (2016)
Appreciate it if you'd like & share this review on your facebook pages, with links to both above noted books, and inwarmblood.net

He paintings so the money went to helping homeless teens who also had substance abuse issues. They was ponded by saying Enterprising can happen even if I don't profit from it. I got 3 or 4 years of bullshit tickets that kept me in and out of seg. The most recent was this past December I was working on the unit. I was supposed to put away supplies. They searched the cell of all the workers & found writing tablets. I had one tablet that I had a receipt for from canteen that was delivered the day before. So of course one would assume easy to solve. The pads they sell are different from the state issued. They put the pads back into the unit inventory. So when I bring my receipt to the hearing it was a moot point. Because they didn't have the pad. They 've me 60 days DS while all the other workers got 30 days cell confinement & went back to work. So the officer who wrote it had made several comments that I'm not special. I've had 3 phone conferences with the D.A.s office in a nearby city. They had a book club & read "my" book & asked what could have been done to change the course of my life & what could be fone. This officer witnessed this & was very upset. Next thing I knew fee abuse took place. So some have had negative reaction. But she had not read the book.
What kind of feedback did I get? Mostly positive. I've had a few people (prisoners) who has read it & somehow has come to the conclusion that this plus my friendship with people like dirty cheese or worse this somehow must mean... I don't judge people. When I regained "control" over my mind & body I was intent on not being governed by my fear or stereotypes. Plus the people who were becoming into my life could have judged me for being a gang member (former), a murderer etc... but they looked at who I was as a person and judge my character not my actions from over 20 years ago. How could I be any less than... Most people who has read the book & a few have admitted in positions of power that they did & claimed that the book & the countless other stories like it is part of the reason the DOC/CCI is trying to move in a different direction. But no one has done on record.
Were there any changes? Put it this way, there is still not a rule or policy that instructs the employees of the Doc of what to do or not to do when dealing with the hearing impaired. Get this, they single cell a homosexual with tits because they claim that they place him at risk for a hack or any homosexual who claims to be uncomfortable in double cells. I've had roommates use my disability to steal from me. When I'm sleep & take out hearing aids & dudes are rifling through my shit. About 2 years ago, a deaf guy was murdered. Dude snuck behind him & choked him out. I don't know of any homosexual that has been murdered, & his homosexuality was used to do it. I still have by C.O.S. who come up to me face red & full of anger. They have felt I ignored a question or directive that they usually asked or shouted from across the room or n an area that has had a lot of other noise. So they don't know that they need to get my attention first.
Do I get any royalties? No. I didn't want money for this. My goal was about helping young people. The Doc has a rule. If I get why you asked. When you get royalty checks it goes to the business office. They take all of it & use it to pay off any & all of your debts first. Then they give you what's left.
My advice would be to set up an investment account & any money you get would go directly into that account & can be used to buy the things you need such as stamps & paper until your debts are paid off. What I wanted to do was use the money to buy books for the prison library. When I asked them to give me a list of approved books they wanted me to just give them the check & they'd buy them. Really? So after many efforts... I gave up. They money now goes to help inner city kids who are going to college. We've given away 3 scholarships of $2,500 so far. We've purchased backpacks & supplies, a couple TV's & radios too. The book came out in 2014 so sails are not as consistent as they were. But each time I have an art show it jumps. Right now here's a movie (documentary) being made about me & the book so its expected that this will have an effect. The book is a print on demand. So there was not any need for 1st edition or 2nd edition sort of thing.
I've got an art show coming up in June. My shows are not for sale. I use my art to bring awareness to issues I care about. I've found that I don't need to chase a dollar. Since I have stopped doing that, it finds me, or I've gotten letters & cards of support or came with support. I don't want for anything. I attribute it as blessings form my creator.
I pray that you find your way out of there. I hope you are able to get your issues out to a wider base & that you use that power with good intentions. Thank you for reading the book & writing.
inwarmblood.net
darrenmorrisart.com
Peace Darren