You Call This a Shutdown? 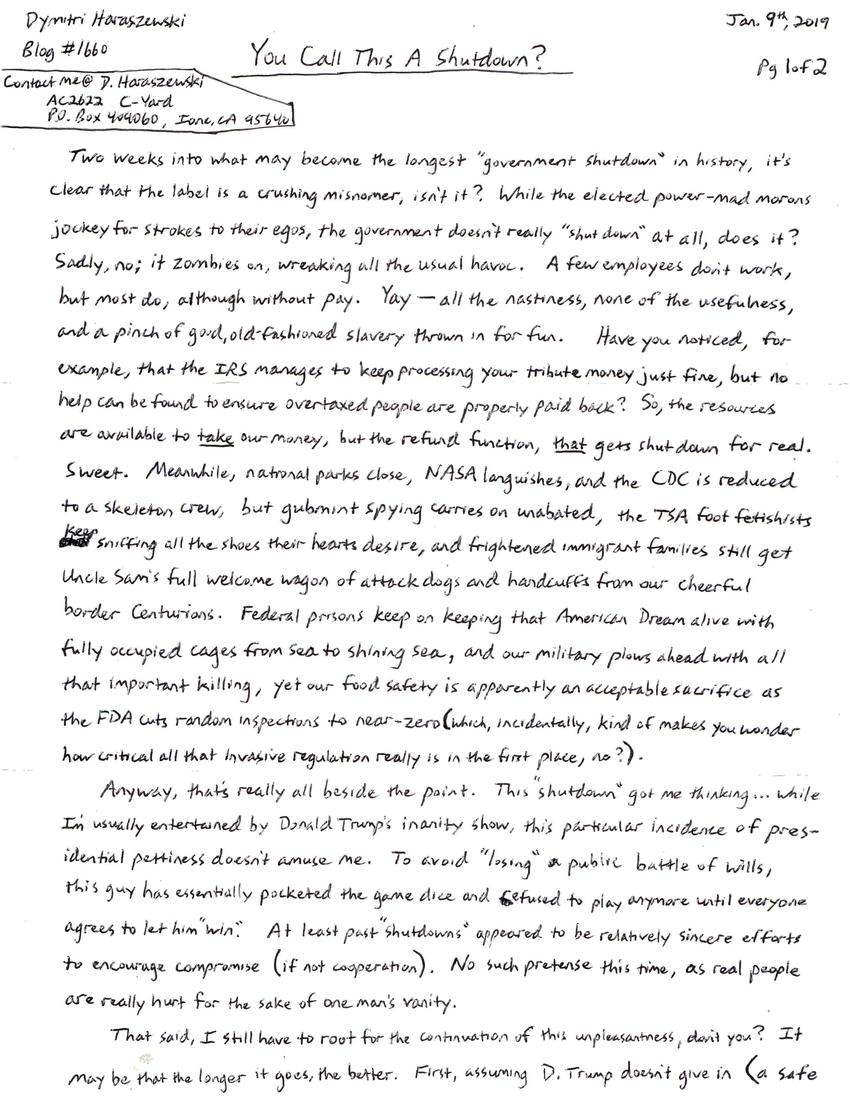 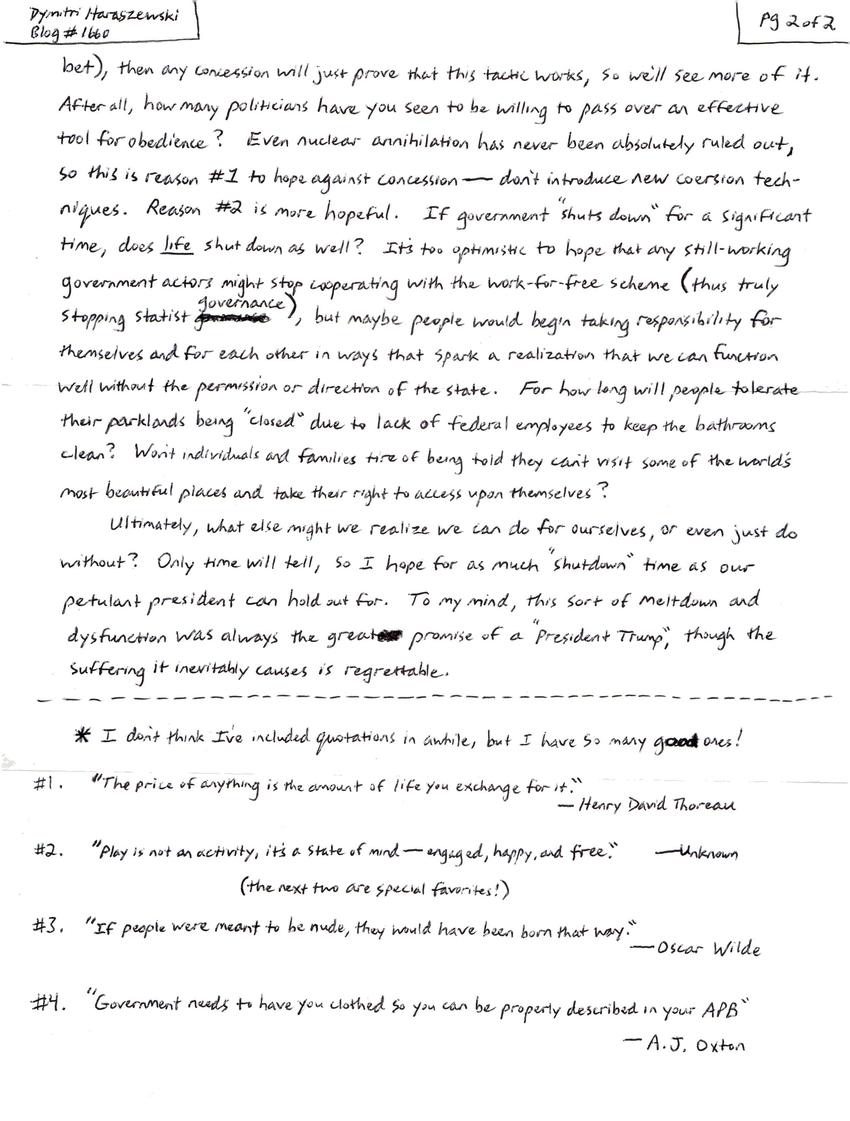 You Call This A Shutdown?

Two weeks into what may become the longest "government shutdown" in history, it's clear that the label is a crushing misnomer, isn't it? While the elected power-mad morons jockey for strokes to their egos, the government hasn't really "shutdown" at all, has it? Sadly, no. It zombies on, wreaking all the usual havoc. A few employees don't work but most do, although without pay.

Yay. All the nastiness, none of the usefulness, and a pinch of good old-fashioned slavery thrown in for fun.

Have you noticed, for example, that the IRS manages to keep processing your tribute money just fine, but no help can be found to endure overtaxed people are properly paid back? So the resources are available to take our money, but the refund function—that gets shut down for real. Sweet.

Meanwhile, national parks close, NASA languishes, and the CDC is reduced to a skeleton crew. But gubrmint spying carries on unabated, the TSA foot fetishists keep sniffing all the shoes their hearts desire, and frightened immigrant families still get Uncle Sam's full welcome wagon of attack dogs and handcuffs from our cheerful border centurians. Federal prisons keep on keeping that American Dream alive with fully occupied cages from sea to shining sea, and our military plows ahead with all that important killing. Yet our food safety is apparently an acceptable sacrifice as the FDA cuts random inspections to near zero—which, incidentally, kind of makes you wonder how critical all that investigative regulation really is in the first place, no?

Anyway, that's really all beside the point. This "shutdown" got me thinking. While I'm usually entertained by Donald Trump's inanity show, this particular incidence of presidential pettiness doesn't amuse me. To avoid "losing" a public battle of wills, this guy has essentially pocketed the game dice and refused to play anymore until everyone agrees to let him "win". At least past "shutdowns" appeared to be relatively sincere efforts to encourage compromise (if not cooperation). No such pretense this time, as real people are really hurt for the sake of one man's vanity.

That said, I still have to root for the continuation of this unpleasantness, don't you? It may be that the longer it goes, the better.

First, assuming D. Trump doesn't give in —a safe bet—, then any concession will just prove that this tactic works. So we'll see more of it. After all, how many politicians have you seen to be willing to pass over an effective tool for obedience? Even nuclear annihilation has never been absolutely rules out, so this is reason #1 to hope against concession—don't introduce new coercion techniques.

Reason #2 is more hopeful. If government "shuts down" for a significant time, does life shut down as well? It's too optimistic to hope that any still-working government actors might stop cooperating with the work-for-free schemes, thus truly stopping statist governance—but maybe people would begin taking responsibility for themselves and for each other in ways that spark a realization that we can function well without the permission or direction of the state. For how long will people tolerate their park lands being "closed" due to lack of federal employees to keep the bathrooms clean? Won't individuals and families tire of being told they can't visit some of the world's most beautiful places and take their right to access upon themselves?

Ultimately, what else might we realize we can do for ourselves or even just do without? Only time will tell. I hope for as much "shutdown" time as our petulant president can hold out for. To my mind, this sort of meltdown and dysfunction was always the great promise of a "President Trump", though the suffering it inevitably causes is regrettable.

I don't think I've included quotations in a while, but I have so many good ones!

"The price of anything is the amount of life you exchange for it."
—Henry David Thoreau

"Play is not an activity, it's a state of mind—engaged, happy, and free."
—Unknown

"If people were meant to be nude, they would have been born that way."
—Oscar Wilde

"Government needs to have you clothed so you can be properly described in your APB."
—A.J. Oxton