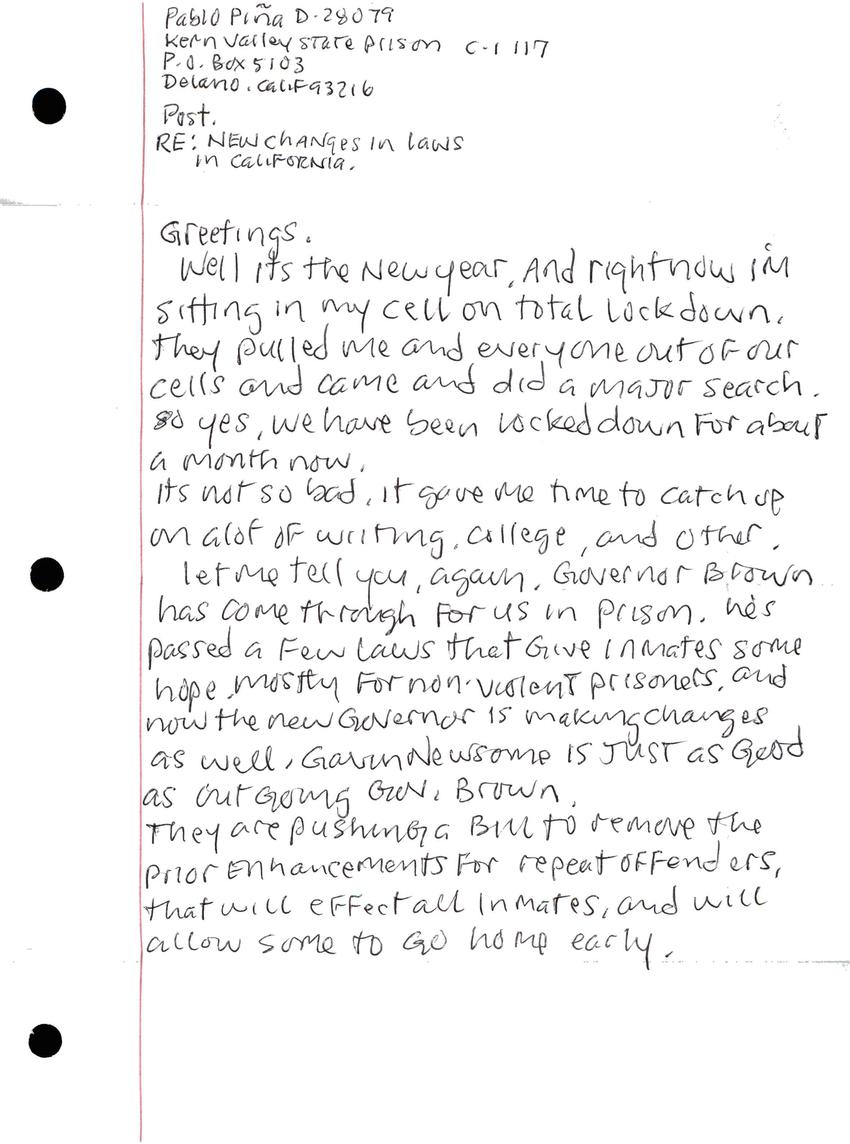 Re: New Changes in Laws in California

Well, it's the new year. And right now I'm sitting in my cell on total lockdown. They pulled me and everyone out of our cells, and came and did a major search. So, yes, we have been locked down for about a month now.

It's not so bad. It gave me time to catch up on a lot of writing, college, and other things.

Let me tell you, again. Governor Brown has come through for us in prison. He's passed a few laws that gave inmates some hope, mostly for nonviolent prisoners. Now the new governor is making changes as well. Governor Newsome is just as good as outgoing Gov. Brown.

They are pushing a bill to remove the prior enhancements for repeat offenders. That will effect all inmates and will allows some to go home early.

Hey Daddy,
How are you? I've been thinking so much about you and I've been wanting to write for so long but I was so far in my addiction I was scared to write to you but as of today I'm 24 hours in clean off the shit that mad me hate my moms, but I can say it's been even longer since I've picked up a needle, it's going on 4 months now since I layed that part of my life to rest. So many things have happened dad since I've last kept in touch with you and I'm ashamed now to even tell you what a failure ur lil girl has been but I met a great man who has a small son that I feel like I'm so lucky that they allow me to be apart of their lives and a second chance to be a mother, I fucked it up with my kids and I have so many regrets on that but it's something I'm going to have to deal with real soon but I just need your help on staying on this path dad. I signed up to have that phone hooked up but I can't get into that account so idk guess when I get some money I'll do it again so we can talk but for right now here is the address you can contact me at 1407 eastern meadows apartment, Greer south Carolina 29650 I can't wait to hear from you daddy, I love and miss you so much. I'm so heart broken so done stole all my pics of my cali family and your letters and all my drawings you did for me. I really need some more art from you dad cuz at the end of every month I wanna get a piece done to celebrate a month in recovery.... well love you dad plz right me . I hope your well P.S. plz send me two visitation forms so I can come out in June to see you
Stephanie, I sent you a letter but have not heard from you, the address did not have the apt. number.so I don't know if you got it or not , but happy belated birthday, luv you and thinking of you.

From Pablo Piña, via Carly
Stephanie, I'm a friend of Pablo's and we are in pretty regular communication through email. If you ever need to get a message to him, let me know.