The Fact That We Exist 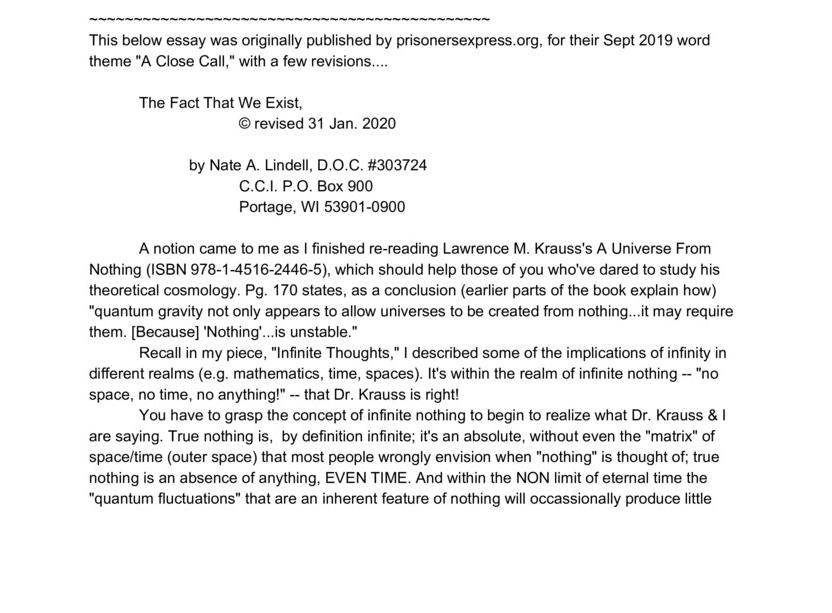 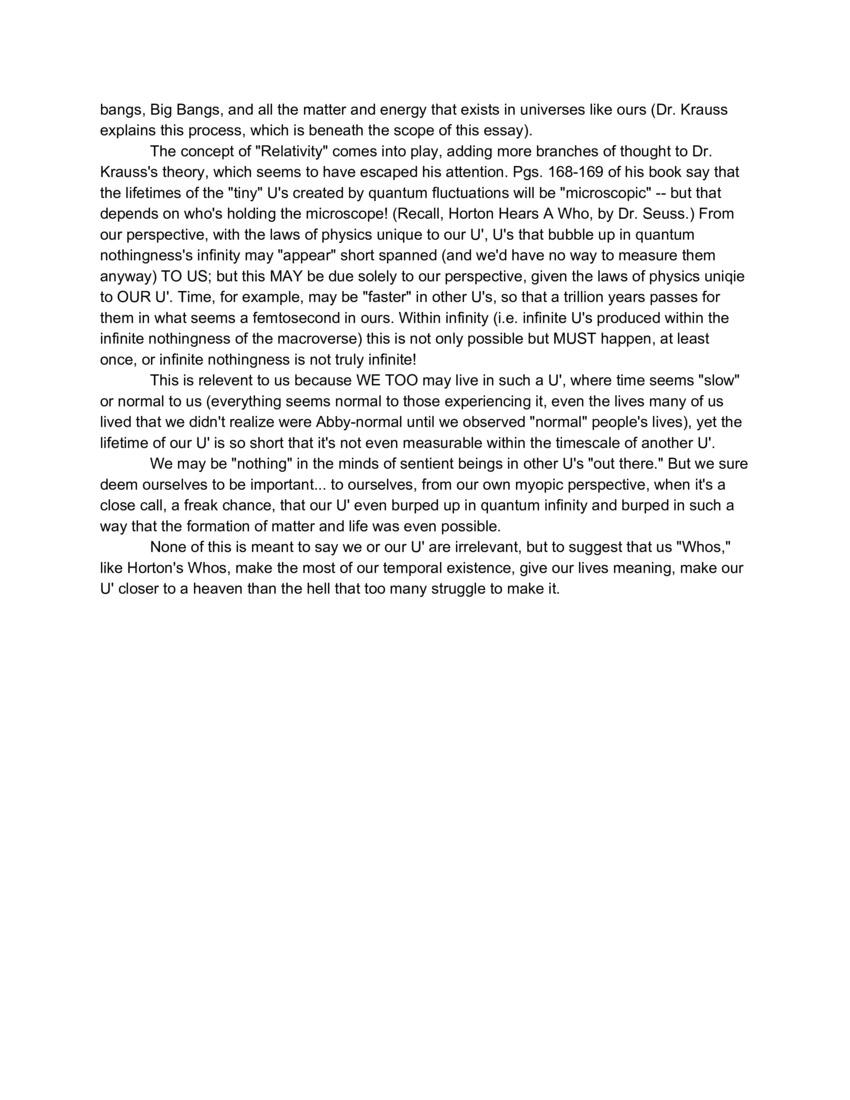 ————
The below essay was originally published by prisonersexpress.org for their Sept 2019 word theme "A Close Call" with a few revisions...

A notion came to me as I was finishing rereading Lawrence M. Krauss's A Universe From Nothing (ISBN 978-1-4516-2446-5), which should help those of you who've dared to study his theoretical cosmology. Pg. 170 states as a conclusion (earlier parts of the book explain how): "Quantum gravity not only appears to allow universes to be created from nothing... it may require them. [Because] 'nothing' is unstable."

Recall in my piece, Infinite Thoughts, I described some of the implications of infinity in different realms (e.g. mathematics, time, space). It's within the realm of infinite nothing. No space, no time, no anything! Dr. Krauss is right!

You have to grasp the concept of infinite nothing to begin to realize what Dr. Krauss and I are saying. By nothing, true nothing is infinite. It's an absolute without even the matrix of space-time—or outer space that most people wrongly envision when they think of nothing. True nothing is an absence of anything, even TIME.

And within the NON limit of eternal time, the quantum fluctuations that are an inherent feature of nothing will occasionally produce little bangs, Big Bangs, and all the matter and energy that exists in universes like ours. Dr. Krauss explains this process, which is not within the scope of this essay.

The concept of relativity comes into play, adding more branches to Dr. Krauss's theory, which seems to have escaped his attention. Pgs. 168-169 of his book say that the lifetimes of the tiny U's created by quantum fluctuations will be microscopic.

But that depends on who's holding the microscope! Recall Horton Hears A Who by Dr. Seuss.

This is relevant to us because WE TOO may live in such a U, where time seems slow or normal to us. Everything seems normal to those experiencing it, even the lives many of us lived that we didn't realize were Abby-normal until we observed "normal" people's lives. Yet the lifetime of our U is so short that it's not even measurable within the timescale of another U.

We may be nothing in the minds of sentient beings in other U's out there. But we sure deem ourselves to be important—to ourselves, from our own myopic perspective—when it's a close call, a freak chance that our U even burped up in the quantum infinity in such a way that the formation of matter and life was even possible.

None of this is meant to say we or our U are irrelevant. It's to suggest that us Who's like Horton's Whos make the most of our temporal existence, give our lives meaning, make our U closer to a heaven than a hell, that too many struggle to make it.