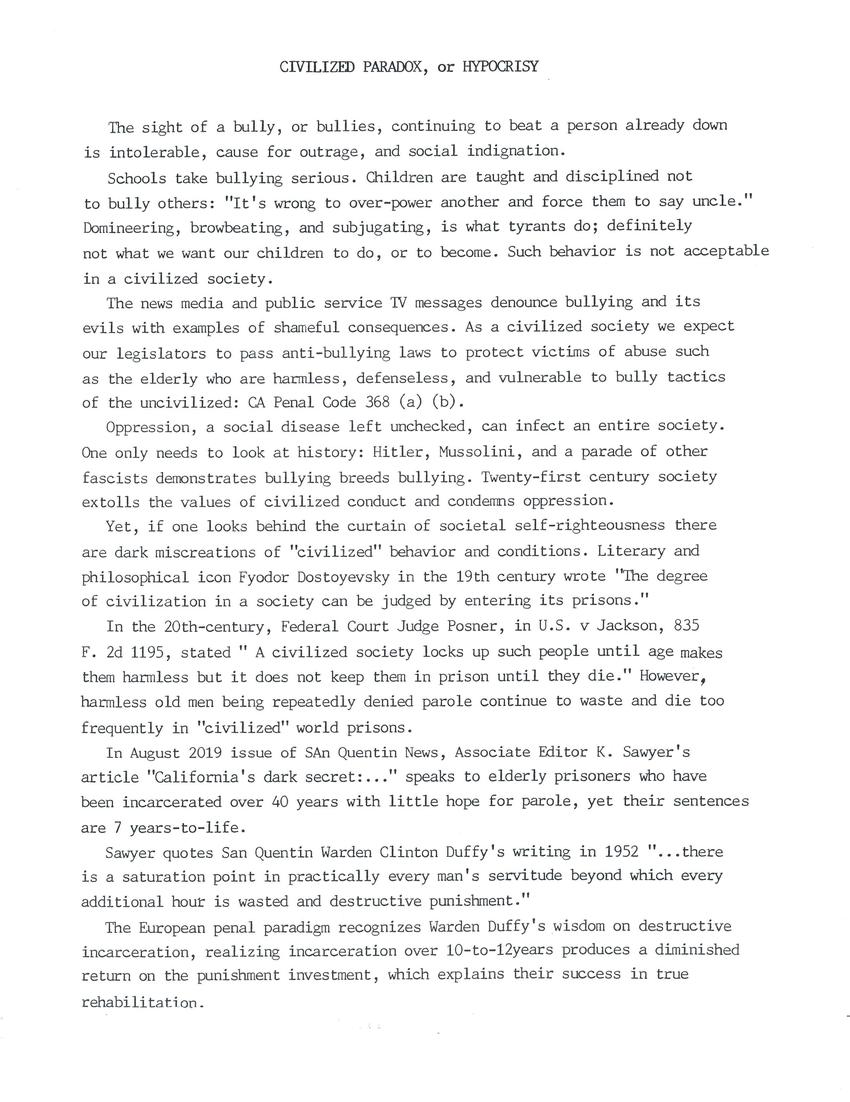 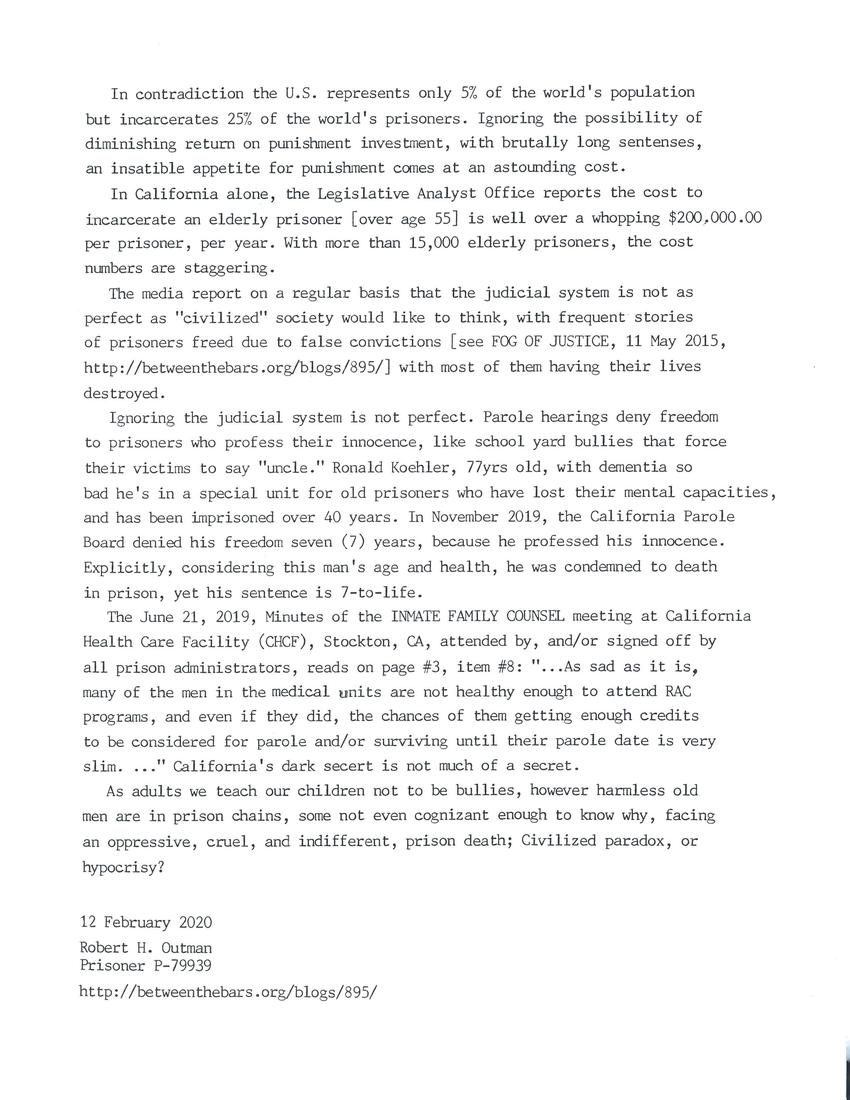 The sight of a bully, or bullies, continuing to beat a person already down is intolerable, cause for outrage, and social indignation.

Schools take bullying serious. Children are taught and disciplined not to bully others. "It's wrong to overpower another and force them to say uncle." Domineering, browbeating, and subjugating is what tyrants do. Definitely not what we want our children to do, or to become. Such behavior is not acceptable in a civilized society.

The news media and public service TV messages denounce bullying and its evils with examples of shameful consequences. As a civilized society, we expect our legislators to pass anti-bullying laws to protect victims of abuse such as the elderly who are harmless, defenseless, and vulnerable to bully tactics of the uncivilized: CA Penal Code 368(a)(b).

Oppression, a social disease left unchecked, can infect an entire society. One only needs to look at history: Hitler, Mussolini, and a parade of other fascists demonstrates bullying breeds bullying. Twenty-first century society extols the values of civilized conduct and condemns oppression.

Yet, if one looks behind the curtain of social self-righteousness, there are dark miscreations of "civilized" behavior and conditions. Literary and philosophical icon Fyodor Dostoyevsky in the 19th century wrote, "The degree of civilization in a society can be judged by entering its prisons."

In the 20th century, Federal Court Judge Posner, in U.S. v. Jackson, 835 F. 2d 1195, stated, "A civilized society locks up such people until age makes them harmless but it does not keep them in prison until they die." However, harmless old men being repeatedly denied parole continue to waste and die too frequently in "civilized" world prisons.

In August 2019 issue of San Quentin News, Associate Editor K. Sawyer's article "California's Dark Secret..." speaks to elderly prisoners who have been incarcerated for over 40 years with little hope for parole. Their sentences are seven years to life.

Sawyer quotes San Quentin Warden Clinton Duffy's writing in 1952, "...there is a saturation point in practically every man's servitude beyond which every additional hour is wasted and destructive punishment."

The European penal paradigm recognizes Warden Duffy's wisdom on destructive incarceration, realizing incarceration over 10 to 12 years produces a diminished return on the punishment investment, which explains their success in true rehabilitation.

In contradiction the U.S> represents only 5% of the world's population but incarcerates 25% of the world's prisoners. Ignoring the possibility of diminishing return on punishment investment, with brutally long sentences, an insatiable appetite for punishment comes at an astounding cost.

In California alone, the Legislative Analyst Office reports the cost to incarcerate an elderly prisoner [over age 55] is well over a whopping $200,000 per prisoner per year. With more than 15,000 elderly prisoners, the cost numbers are staggering.

The media report on a regular basis that the judicial system is not as perfect as "civilized" society would like to think, with frequent stories of prisoners freed due to false convictions [see FOG OF JUSTICE, 11 May 2015, http://betweenthebars.org/blogs/895/] with most of them having their lives destroyed.

Ignoring the judicial system is not perfect. Parole hearings deny freedom to prisoners who profess their innocence, like school yard bullies who force their victims to say uncle.

Ronald Koehler, 77 years old, with dementia so bad he's in a special unit for old prisoners who have lost their mental capabilities, has been impaired for over 40 years. In November 2019, the California Parole Board denied his freedom seven years because he professed his innocence. Explicitly, considering this man's age and health, he was condemned to death in prison. Yet his sentence is seven to life.

The June 21, 2019 Minutes of the INMATE FAMILY COUNSEL meeting at California Health Care Facility (CHCF), Stockton, CA, attended by and/or signed off by all prison administrators, reads on page 3, item 8:

"... As sad as it is, many of the men in the medical units are not healthy enough to attend RAC programs, and even if they did, the chances of them getting enough credits to be considered for parole and/or surviving until their parole date is very slim..."

California's dark secret is not much of a secret.

As adults, we teach our children not to be bullies. However harmless old men are in prison chains, some not even cognizant enough to know why, facing an oppressive, cruel, and indifferent prison death. Civilized paradox or hypocrisy?

Dear Robert!
I just really hope all is good with you, or at least some. Just remembered this way of reaching out by btb, and the possibility of sending a poem your way. It's a bit dark, but it's a bit dark times too. I am fine, staying mainly inside.
Hope to have your news soon, Julia

Some folks fool themselves into believing,
But I know what I know once, at the height
Of hopeless touching, my man and I hold
Our breaths, certain we can stop time or maybe

Eliminate it from our lives, which are shorter
Since we learned to make love for each other
Rather than doing it to each other. As for praise
And worship, I prefer the latter. Only memory

Makes us kneel, silent and still. Hear me?
Thunder scares. Lightning lets us see. Then,
Heads covered, we wait for rain. Dear Lord,
Let me watch for his arrival and hang my head

And shake it like a man who's lost and lived.
Something keeps trying, but I'm not killed yet.