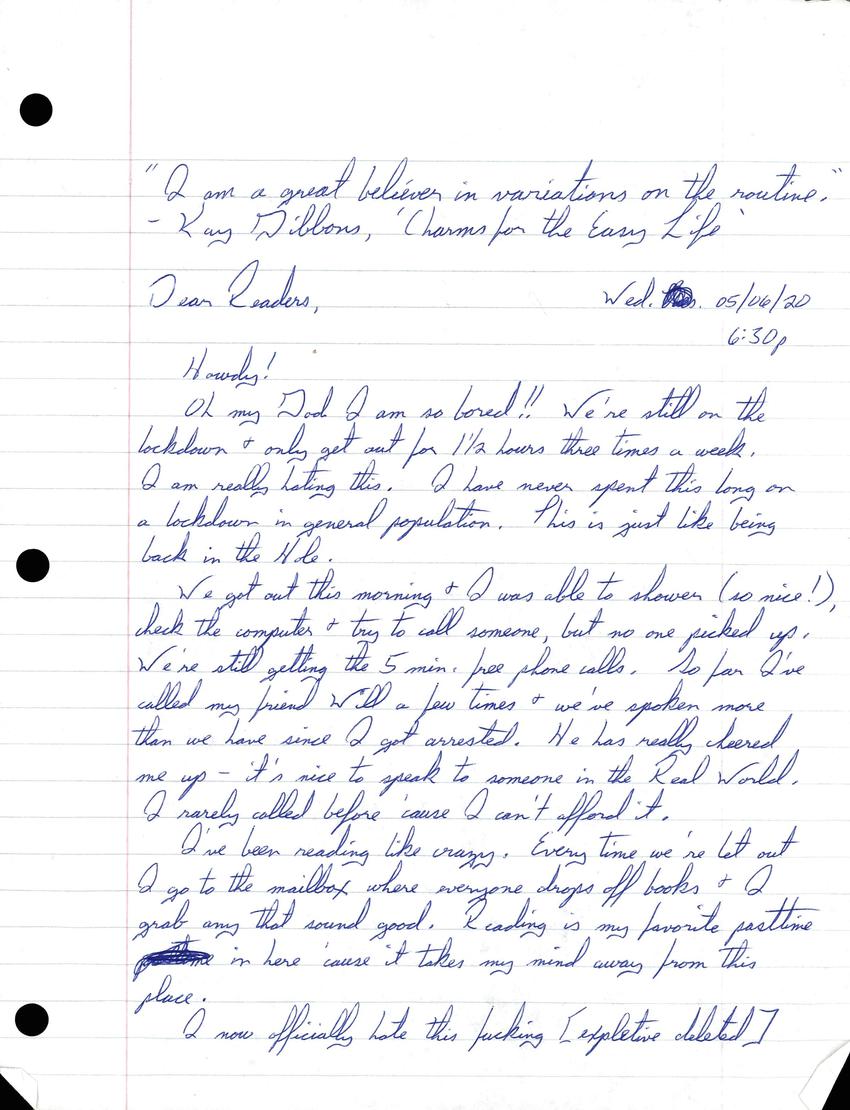 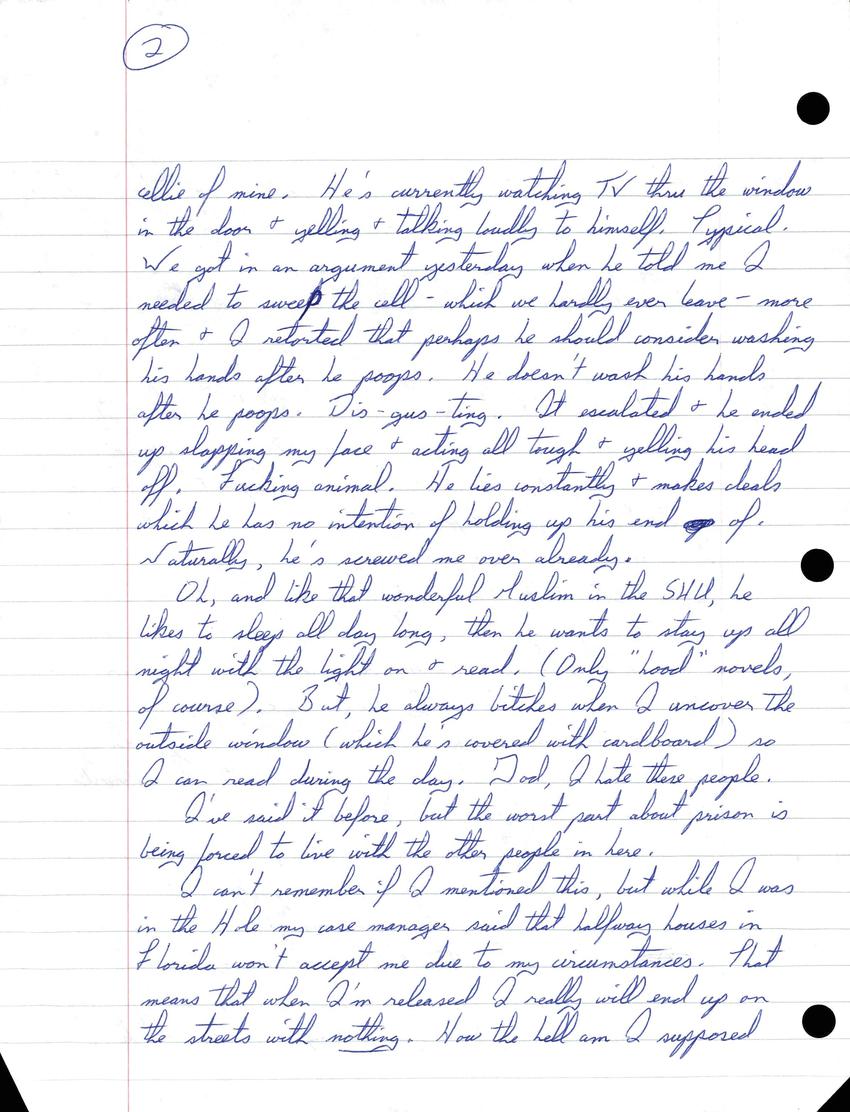 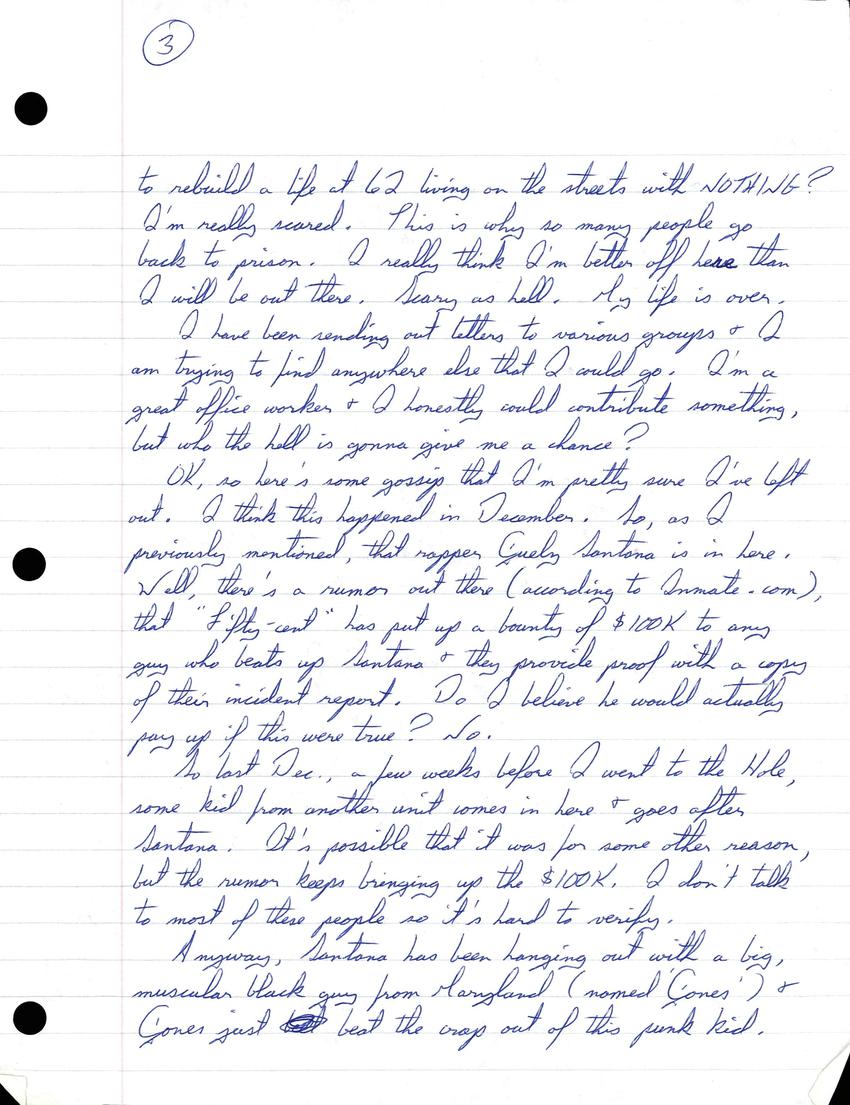 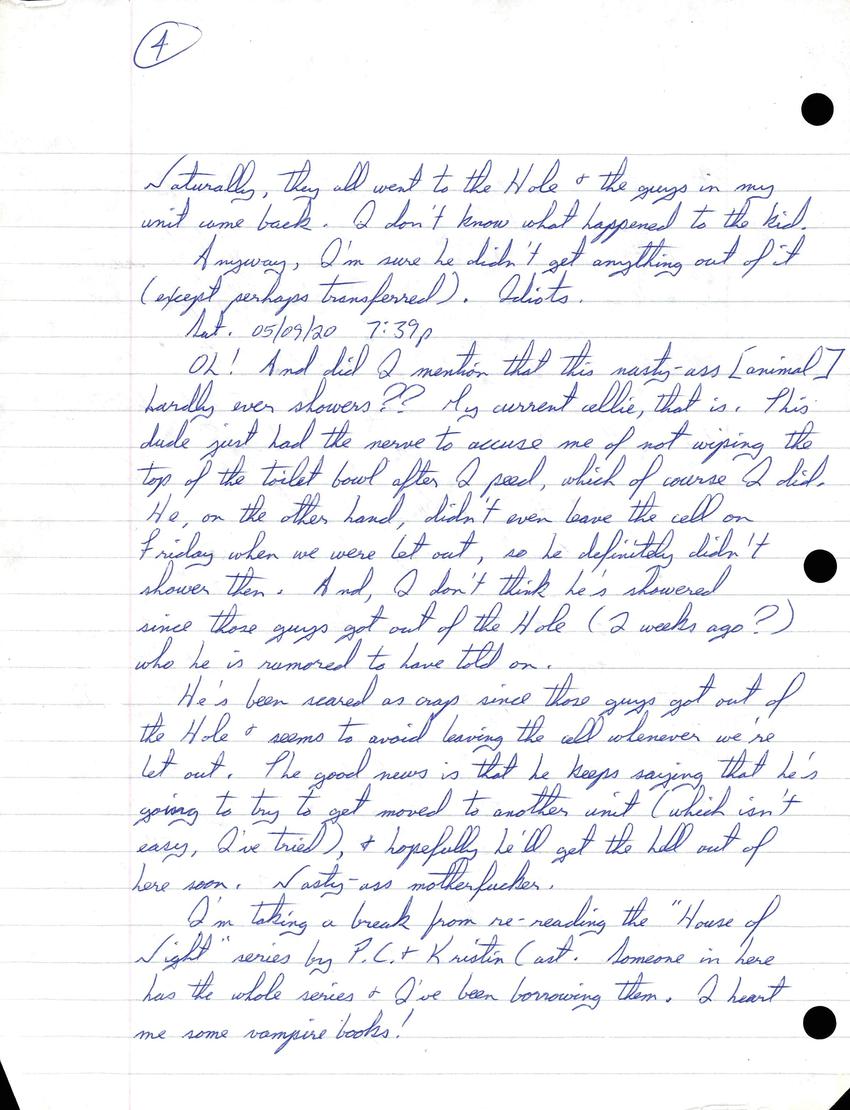 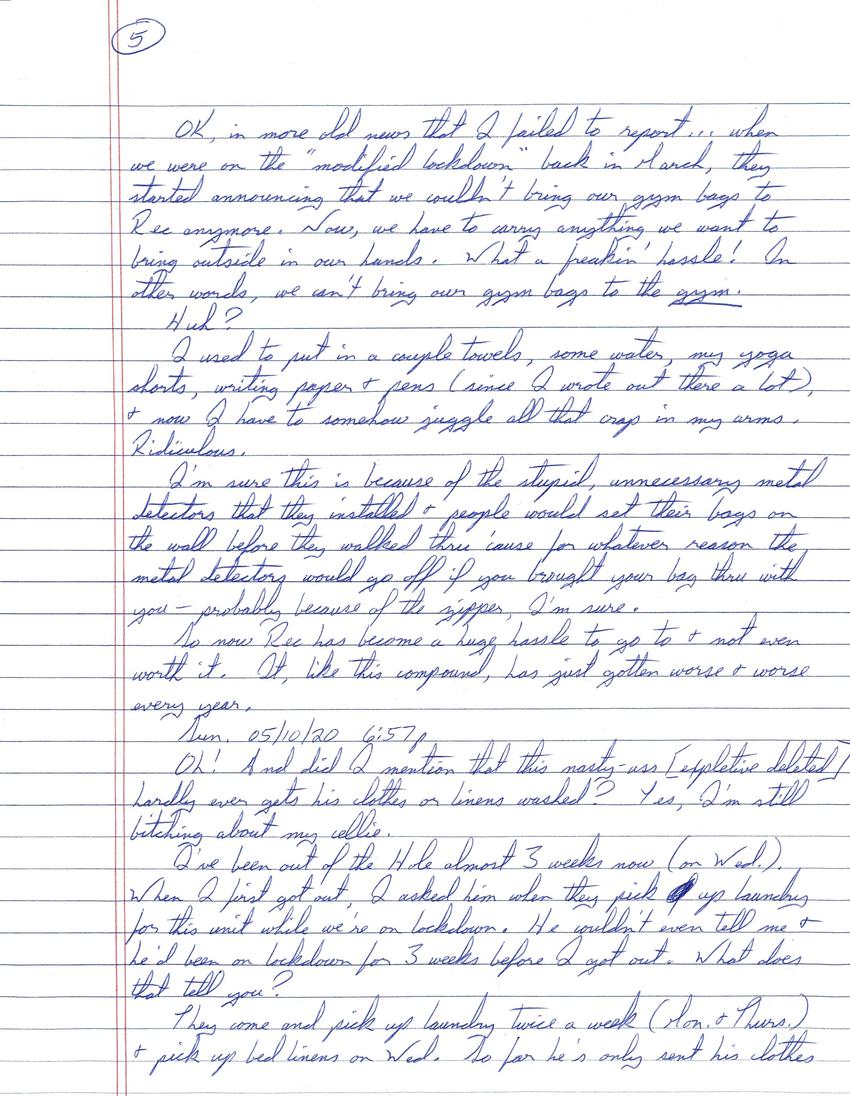 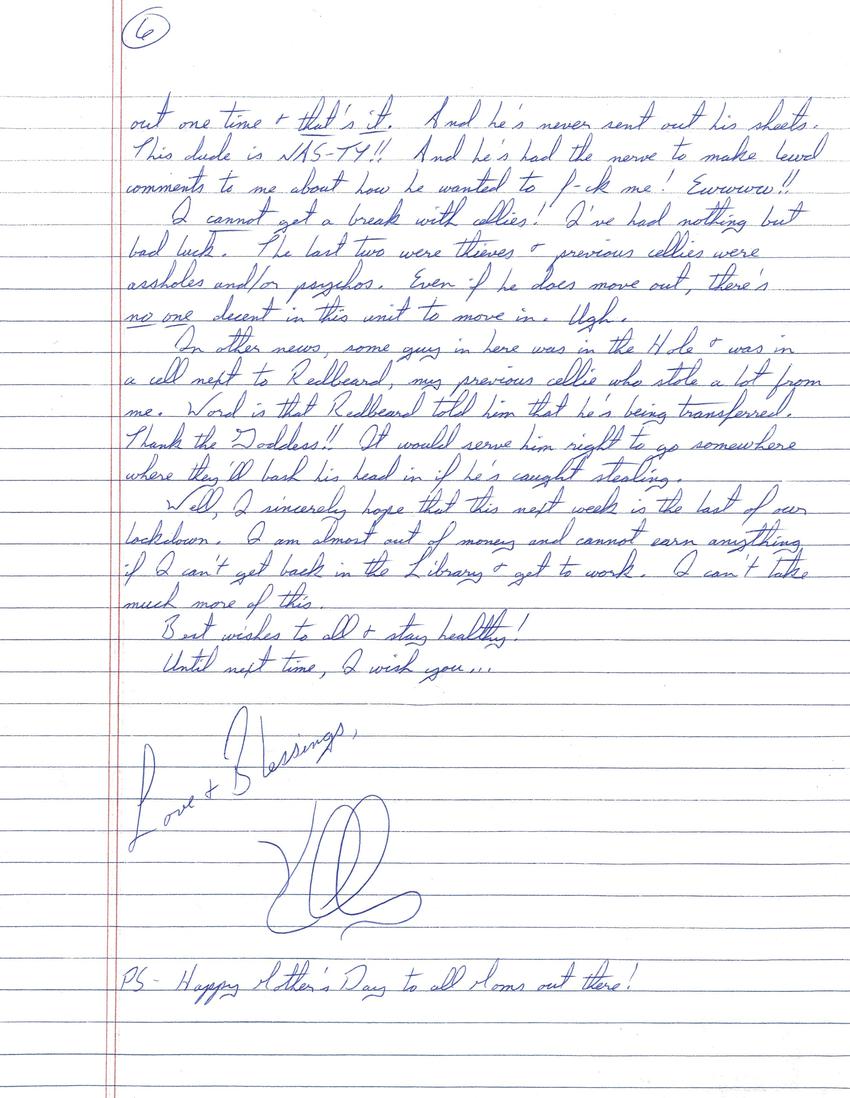 "I am a great believer in variations on the routine." - Kay Gibbons, 'Charms for the Easy Life'

Dear Reader, Wed. 05/06/20
6:30p
Howdy!
Ok my God I am so bored!! We're still on lockdown + only get out for 1 1/2 hours three times a week. I am really hating this. I have never spent this long on a lockdown in general population. This is just like being back in the Hole.
We got out this morning + I was able to shower (so nice!), check the computer + try to call someone, but no one picked up. We're still getting the 5 min. free phone calls. So far I've called my friend Will a few times + we've spoken more than we have since I got arrested. He has really cheered me up = it's nice to speak to someone in the Real World. I rarely called before 'cause I can't afford it.
I've been reading like crazy. Every time we're let out I go to the mailbox where everyone drops off books + I grab any that sound good. Reading is my favorite pasttime in here 'cause it takes my mind away from this place.
I now officially hate this fucking [expletive deleted] cellie of mine. He's currently watching TV thru the window in the door + yelling + talking loudly to himself. Typical. We got in an argument yesterday when he told me I needed to sweep the cell- which we hardly ever leave- more often + I retorted that perhaps he should consider washing his hands after he poops. He doesn't wash his hands after he poops. Dis-gus-ting. It escalated + he ended up slapping my face + acting all tough + yelling his head off. Fucking animal. He lies constantly + makes deals which he had no intention of holding up his end of. Naturally, he's screwed me over already.
Oh, and like that wonderful Muslim in the SHU, he likes to sleep all day long, then he wants to stay up all night with the light on + read. (Only "hood" novels, of course). But, he always bitches when I uncover the outside window (which he's covered with cardboard) so I can read during the day. God, I hate these people.
I've said it before, but the worst part about prison is being forced to live with the other people in here.
I can't remember if I mentioned this, but while I was in the Hole my case manager said that halfway houses in Florida won't accept me due to my circumstances. That means that when I'm released I really will end up on the streets with nothing. How the hell am I supposed to rebuild a life at 62 living on the streets with NOTHING? I'm really scared. This is why so many people go back to prison. I really think I'm better off here than I will be out there. Scary as hell. My life is over.
I have been sending out letters to various groups + I am trying to find anywhere else that I could go. I'm a great office worker + I honestly would contribute something, but who the hell is gonna give me a chance?
OK, so here's some gossip that I'm pretty sure I've left out. I think this happened in December. So, as I previously mentioned, that rapper Juelz Santana is in here. Well, there's a rumor out there (according to Inmate.com), that "Fifty-cent" has put up a bounty of $100k to any guy who beats up Santana + they provide proof with a copy of their incident report. Do I believe he would actually pay up if this were true? No.
So last Dec., a few weeks before I went to the Hole, some kid from another unit comes in here + goes after Santana. It's possible that it was for some other reason, but the rumor keeps bringing up $!00k. I don't talk to most of the people so it's hard to verify.
Anyway, Santana has been hanging out with a big, muscular black guy from Maryland (named 'Jones') + Jones just beat the crap out of this punk kid.
OK, in more old news that I failed to report... when we were on the "modified lockdown" back in March, they started announcing that we couldn't bring our gym bags to Rec anymore. Now, we have to carry anything we want to bring outside in our hands. What a freakin' hassle! On other words, we can't bring our gym bags to the gym.
Huh?
I used to put in a couple towels, some water, my yoga shorts, writing paper + pens (since I wrote out there a lot), + now I have to somehow juggle all that crap in my arms. Ridiculous.
I'm sure this is because of the stupid, unnecessary metal detectors that they installed + people would set their bags on the wall before they walked there 'cause for whatever reason the metal detectors would go off if you brought your bag there with you - probably because of the zipper, I'm sure.
So now Rec has become a huge hassle to go to + not even worth it. It, like his compound, has just gotten worse + worse every year.

Sun. 05/10/20 6:57p
Oh! And did I mention that this nasty-ass [expletive deleted] hardly ever gets his clothes or linens washed? Yes, I'm still bitching about my cellie.
I've been out of the Hole almost 3 weeks now (on Wed.). When I first got out, I asked him when they pick up laundry for this unit while we're on lockdown. He wouldn't even tell me + he'd been on lockdown for 3 weeks before I got out. What does that tell you?
They come and pick up laundry twice a week (Mon. + Thurs.) + pick up bed linens on Wed. So far he's only sent his clothes out one time and that's it. And he's never sent out his sheets. This dude is NAS-TY!! And he's had the nerve to make lewd comments to me about how he wanted to f-ck me! Ewwwww!!
I cannot get a break with cellies! I've had nothing but bad luck. The last two were thieves + previous cellies were assholes and/or psychos. Even if he does move out, there's no one decent in this unit to move in. Ugh.
In other news, some guy in here was in the Hole + was in a cell next to Redbeard, my previous cellie who stole a lot from me, Word is that Redbeard told him that he's being transferred. Thank the Goddess!! It would serve him right to go somewhere where they'll bach his head in if he's caught stealing.
Well, I sincerely hope that this next week is the last of our lockdown, I am almost out of money and cannot earn anything if I can't get back int he Library + get to work. I can't take much more of this.
Best wishes to all + stay healthy!
Until next time, I wish you...

PS- Happy Mother's Day to all Moms out there!

Hi Kelly! Glad to see an update from you. Sorry that your cellie is being an a-hole, but it shows your deep character the way you seem to be handling it all. In other news, I'm glad to hear that Redbeard is getting transferred, he needs a lesson in karma that's for sure. I am sorry that things have been difficult, and I wish there was more I could do to help you. But for now, I'm keeping you in my prayers and hoping you find somewhere to go once you get out. Keep being the bigger person like you have been, and know that good things come to those to wait. Hope you are at least keeping healthy amongst all of this. All the best, sona186. (May 19, 2020)
(scanned reply – view as blog post)
uploaded July 8, 2020.  Original (PDF) 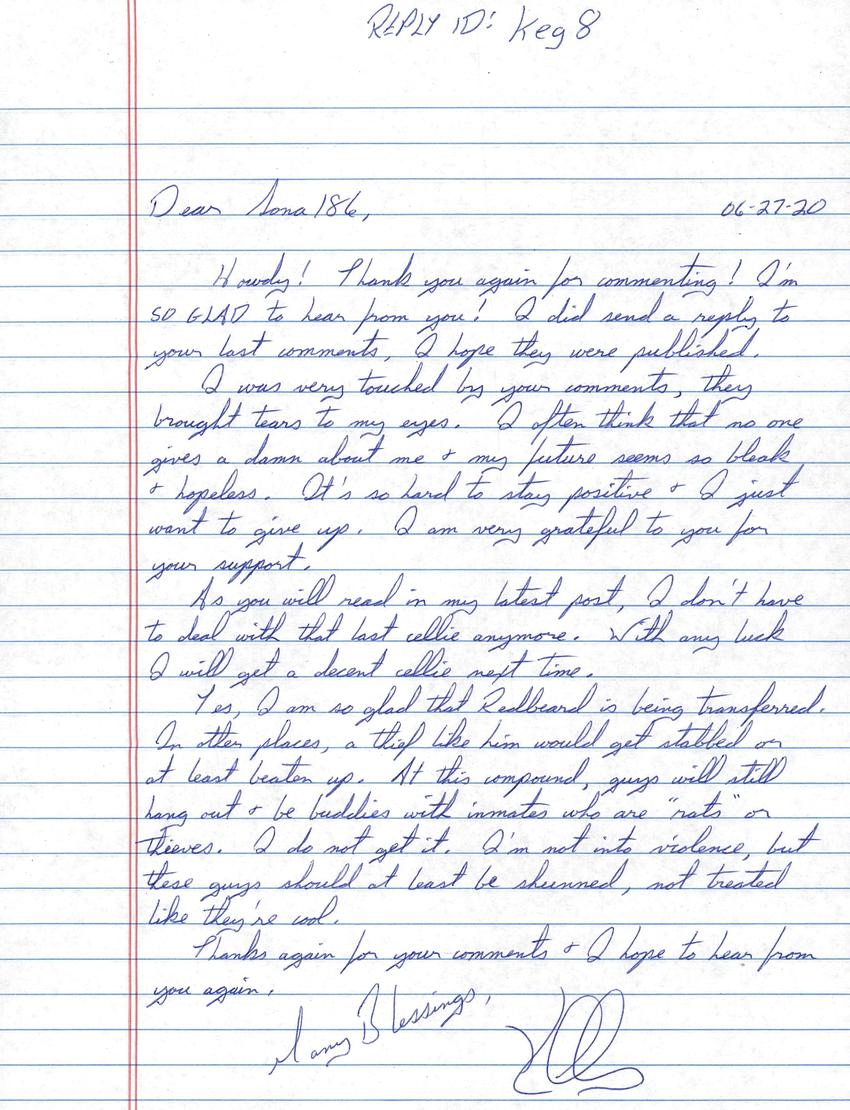