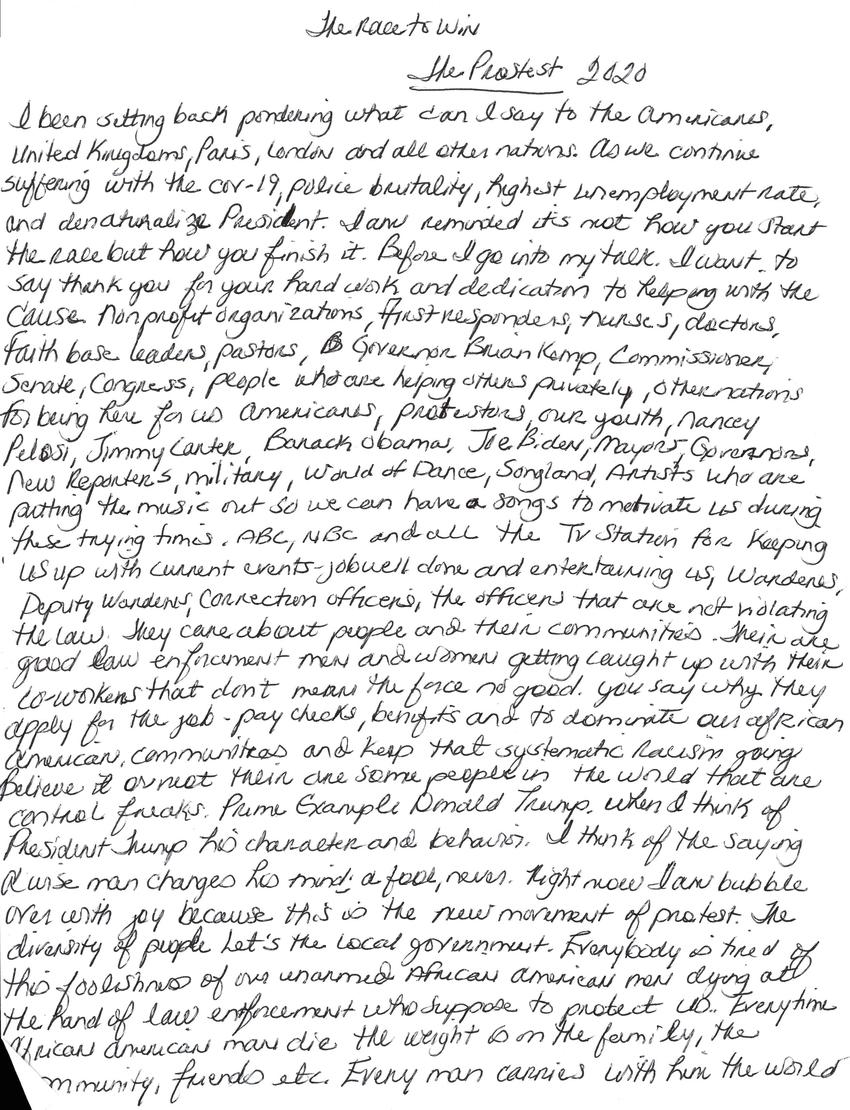 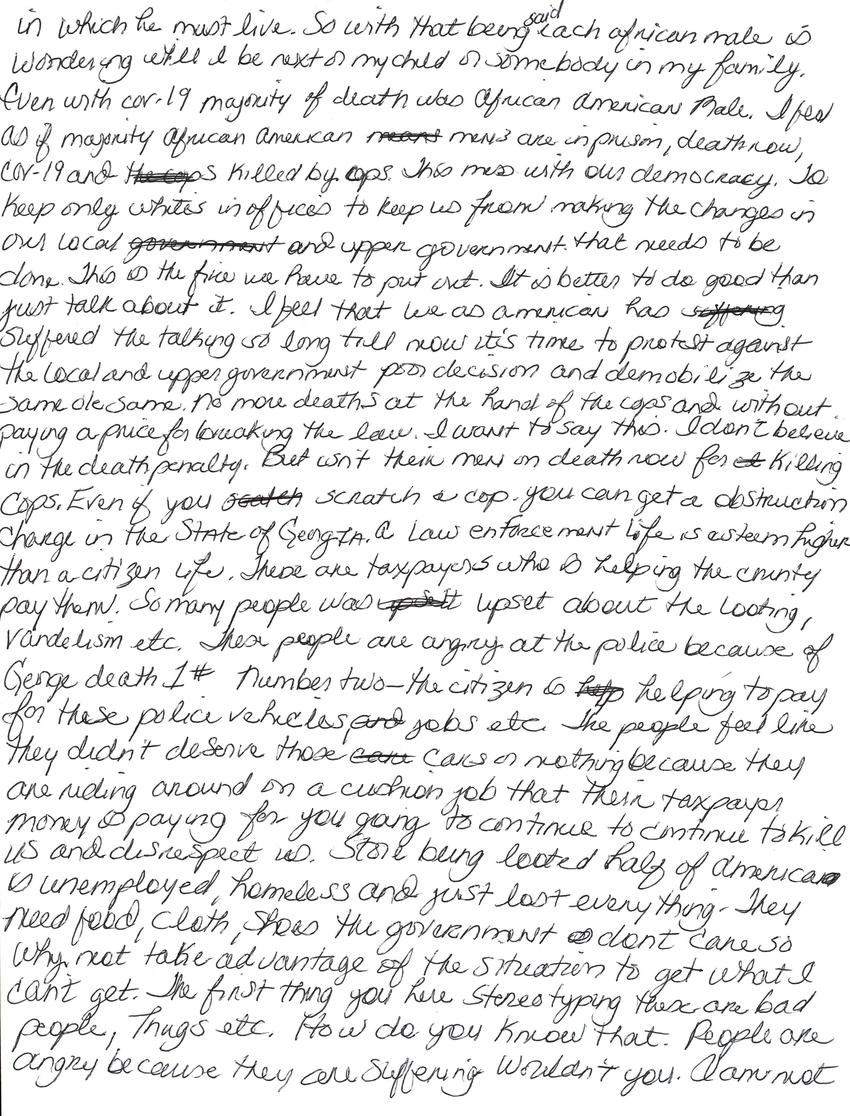 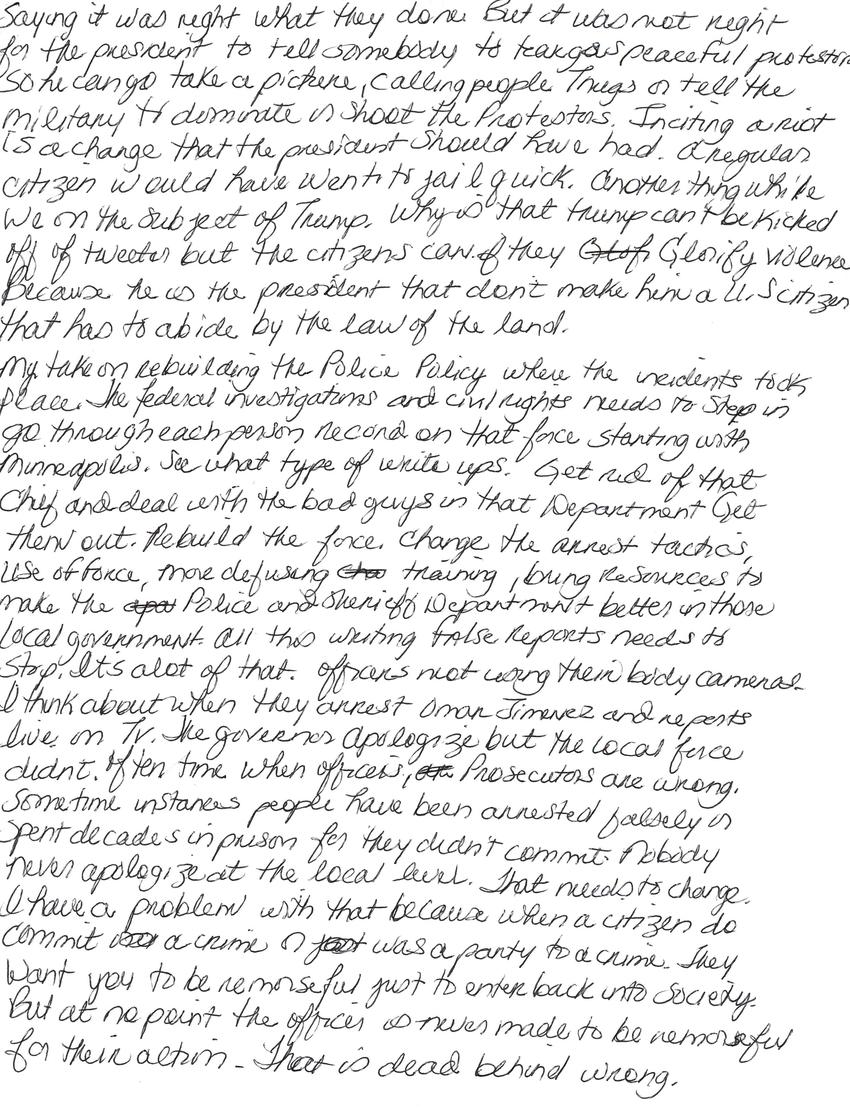 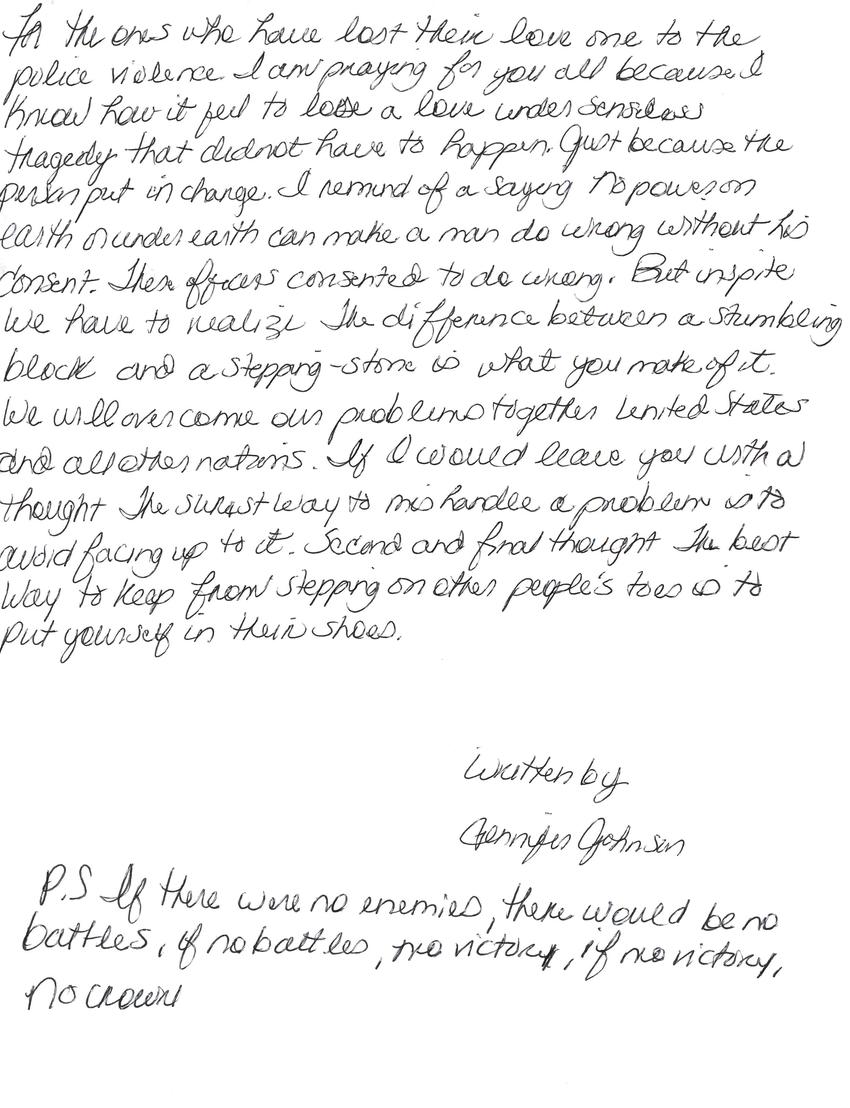 I been setting back pondering what can I say to the Americans, United Kingdoms, Paris, London and all other nations. As we continue suffering with the Cov-19, police brutality, highest unemployment rate, and denaturalize President. I am reminded its not how you start the race but how you finish it. Before I go into my talk, I want to say thank you for your hard work and dedication to helping with the cause nonprofit organizations, first responders, nurses, doctors, faith base leaders, pastors, Governor Brian Kemp, Commissioner, Senate, Congress, people who are helping others privately, other nations for being here for us Americans, protestors, our youth, Nancey Pelosi, Jimmy Carter, Barack Obama, Joe Biden, Mayors, Governors, News Reporters, military, World of Dance, Songland, artists who are putting the music out so we can have a song to motivate us during the trying times,ABC, NBC, and all the TV station for keeping us up with current events - job well done and entertaining us, Wardens, Deputy Wardens, corrections officers, the officers that are not violating the law. They care about people and their communities. Their are good law enforcement men and women getting caught up with their co-workers that don't mean the force no good. You say why they apply for the job - paychecks, benefits and to dominate our African American communities and keep that systematic racism going. Believe it or not, their are some people in the world that are control freaks. Prime example Donald Trump. When I think of President Trump, his character and behavior, I think of the saying a wise man changes his mind; a fool, never. Right now I am bubble over with joy because this is the new movement of protest. The diversity of people lets the local government. Everybody is tired of this foolishness of our unarmed African American men dying at the hand of law enforcement who supposed to protect us. Every time African American men die, the weight is on the family, the community, friends etc. Every man carries with him the world in which he must live. So with that being said, each African male is wondering will I be next or my child, or somebody in my family. Even with Cov-19 majority of death was African American male. Its as if majority African American men are in prison, death row, Cov-19 and killed by cops. This mess with our democracy. To keep only whites in offices to keep us from making the changes in our local and upper government that needs to be done. This is the fire we have to put out. It is better to do good than just talk about it. I feel that we as American has suffered the talking so long till now it's time to protest against the local and upper government poor decision and demobilize the same ole same. No more deaths at the hand of the cops and without paying a price for breaking the law. I want to say this. I don't believe in the death penalty, but isn't their men on death row for killing cops. Even if you scratch a cop, you can get an obstruction charge in the State of Georgia. A law enforcement life is esteem higher than a citizen life. These are taxpayers who is helping the country pay them. So many people was upset about the looting, vandalism etc. These people are angry at the police because of George death 1#. Number two - the citizens helping to pay for these police vehicles, jobs etc. The people feel like they didn't deserve those cars or nothing because they are riding around on a cushion job that their taxpayer moneys paying for, you going to continue to continue to kill us and disrespect us. Store being looted half of American is unemployed, homeless and just lost everything. They need food, cloth, shoes the government don't care so why not take advantage of the situation to get what I can't get. The first thing you hear stores typing these are bad people, thugs etc. How do you know that. People are angry because they are suffering wouldn't you. I am not saying it was right what they done but it was not right for the president to tell somebody to tear gas peaceful protestors, so he can go take a picture, calling people Thugs or tell the military to dominate or shoot the protestors. Inciting a riot is a change that the president should have had a regular citizen would have went to jail quick. Another thing while we on the subject of Trump. Why is that Trump can't be kicked out of twitter but the citizens can if they glorify violence. Because he is the president that don't make him a U.S. citizen that has to abide by the law of the land.

My take on rebuilding the Police Policy where the incidents took place. The federal investigations and civil rights needs to step in go through each person record on that force starting with Minneapolis. See what type of wright ups. Get rid of that Chief and deal with the bad guys in that department. Get them out. Rebuild the force. Change the arrest tactics, use of force, more defusing training, bring resources to make the police and sheriff department better in those local government. All this writing false reports needs to stop. It's a lot of that. Officers not wearing their body cameras. I think about when they arrest Omar Jimenez and reports live on TV. The governor's apologize but the local force didn't. Often time when officers, prosecutors are wrong, sometime instances people have been arrested falsely or spent decades in prison for they didn't commit. Nobody never apologized at the local level. That needs to change. I have a problem with that because when a citizen do commit a crime or was a party to a crime, they want you to be remorseful just to enter back into society. But at no point the officer is never made to be remorseful for their action. That is dead behind wrong. For the ones who have lost their loved one to the police violence, I am praying for you all because I know how it feel to lose a love under senseless tragedy that did not have to happen. Just because the person put in charge. I remind of a saying No power on earth or under earth can make a man do wrong without his consent. These officers consented to do wrong. But inspite we have to realize the difference between a stumbling block and a stepping-stone is what you make of it. We will overcome our problems together United States and all other nations. If I would leave you with a thought, the surest way to mishandle a problem is to avoid facing up to it. Seconds and final thought. The best way to keep from stepping on other people's toes is to put your self in their shoes.