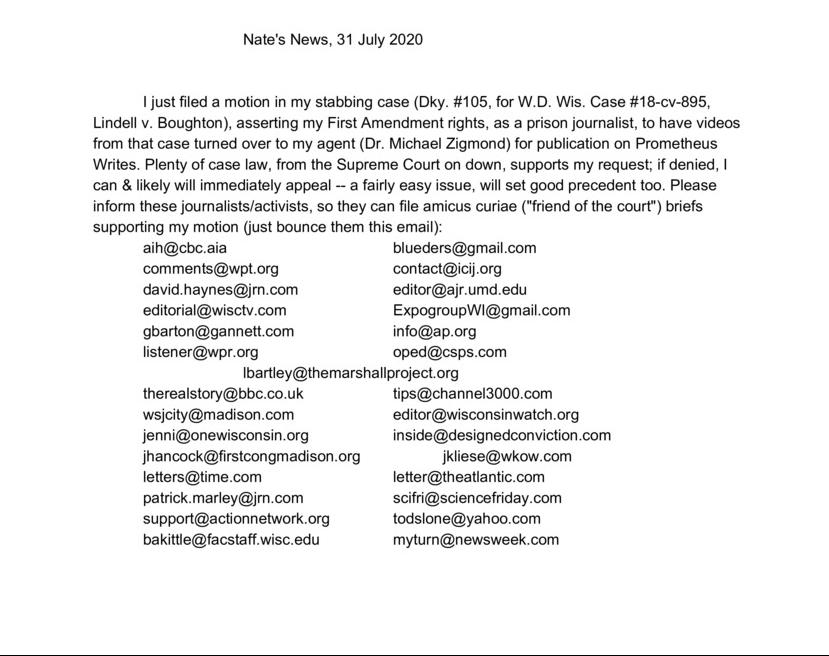 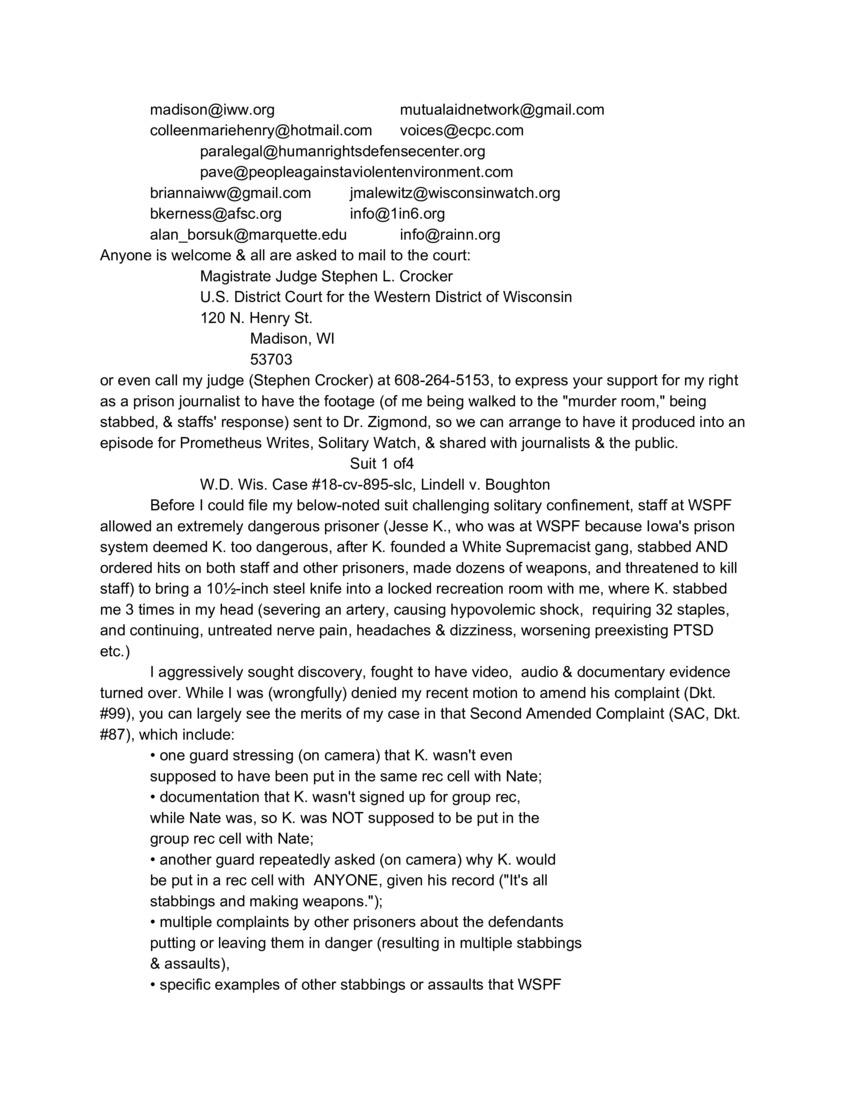 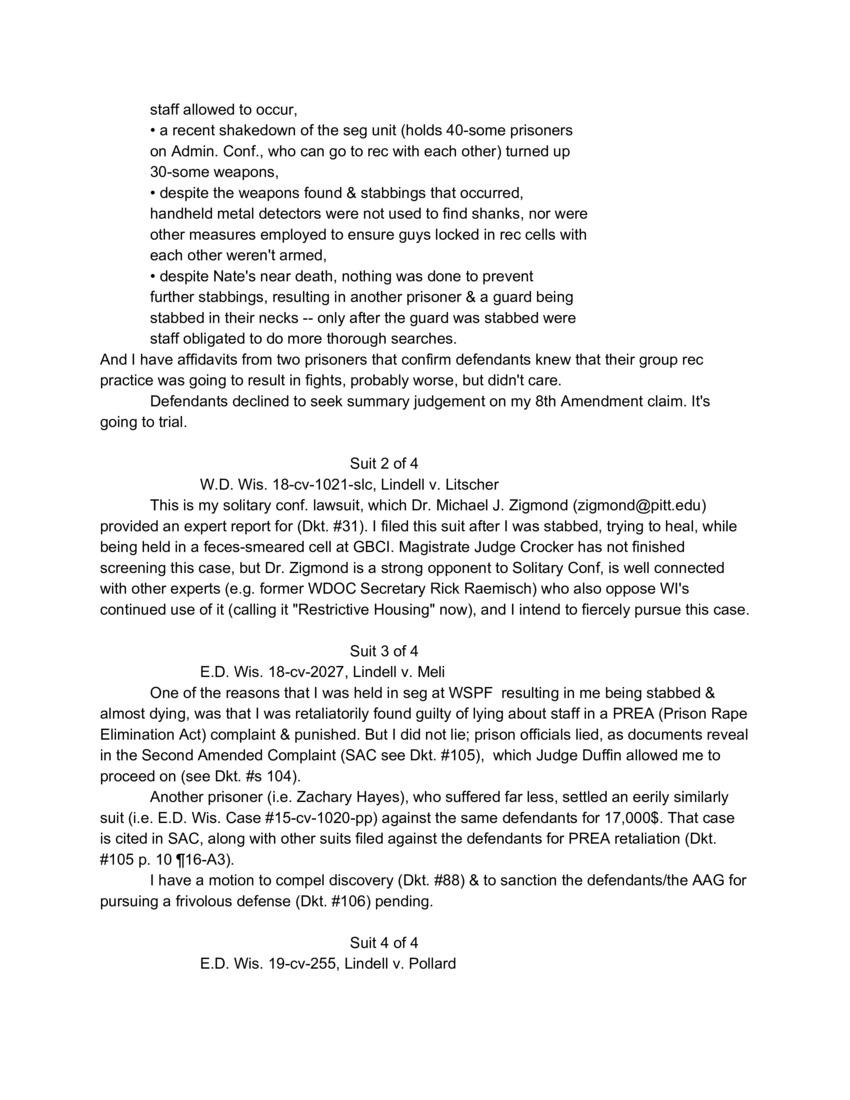 I just filed a motion in my stabbing case (Dkt. #105, for W.D. Wis. Case #18-cv-895, Lindell v. Boughton), asserting my First Amendment rights, as a prison journalist, to have videos from that case turned over to my agent (Dr. Michael Zigmond) for publication on Prometheus Writes. Plenty of case law, from the Supreme Court on down, supports my request; if denied, 1 can & likely will immediately appeal -- a fairly easy issue, will set good precedent too. Please inform these journalists/activists, so they can file amicus curiae ("friend of the court") briefs supporting my motion (just bounce them this email):
aih@cbc.aia
blueders@gmail.com comments@wpt.org
contact@icij.org david.haynes@jrn.com
editor@ajr.umd.edu editorial@wisctv.com
ExpogroupWi@gmail.com gbarton@gannett.com
info@ap.org listener@wpr.org
oped@csps.com Ibartley@themarshallproject.org therealstory@bbc.co.uk
tips@channel3000.com wsjcity@madison.com
editor@wisconsinwatch.org jenni@onewisconsin.org
inside@designedconviction.com jhancock@firstcongmadison.org
jkliese@wkow.com letters@time.com
letter@theatlantic.com patrick.marley@jrn.com
scifri@sciencefriday.com support@actionnetwork.org todslone@yahoo.com bakittle@facstaff.wisc.edu
myturn@newsweek.com
madison@iww.org
mutualaidnetwork@gmail.com colleenmariehenry@hotmail.com voices@ecpc.com
paralegal@humanrightsdefensecenter.org
pave@peopleagainstaviolentenvironment.com
briannaiww@gmail.com
jmalewitz@wisconsinwatch.org
bkerness@afsc.org
info@1in6.org
alan_borsuk@marquette.edu
info@rainn.org
Anyone is welcome & all are asked to mail to the court:
Magistrate Judge Stephen L. Crocker
U.S. District Court for the Western District of Wisconsin
120 N. Henry St.
Madison, WI
53703
or even call my judge (Stephen Crocker) at 608-264-5153, to express your support for my right as a prison journalist to have the footage of me being walked to the "murder room," being stabbed, & staffs' response) sent to Dr. Zigmond, so we can arrange to have it produced into an episode for Prometheus Writes, Solitary Watch, & shared with journalists & the public.
Suit 1 of 4
W.D. Wis. Case #18-cv-895-sic, Lindell v. Boughton
Before I could file my below-noted suit challenging solitary confinement, staff at WSPF allowed an extremely dangerous prisoner (Jesse K., who was at WSPF because Iowa's prison system deemed K. too dangerous, after K. founded a White Supremacist gang, stabbed AND ordered hits on both staff and other prisoners, made dozens of weapons, and threatened to kill staff) to bring a 10%-inch steel knife into a locked recreation room with me, where K. stabbed me 3 times in my head (severing an artery, causing hypovolemic shock, requiring 32 staples, and continuing, untreated nerve pain, headaches & dizziness, worsening preexisting PTSD etc.)
I aggressively sought discovery, fought to have video, audio & documentary evidence turned over. While I was (wrongfully) denied my recent motion to amend his complaint (Dkt. #99), you can largely see the merits of my case in that Second Amended Complaint (SAC, Dkt. #87), which include:
• one guard stressing (on camera) that K. wasn't even supposed to have been put in the same rec cell with Nate;
• documentation that K. wasn't signed up for group rec, while Nate was, so K. was NOT supposed to be put in the
group rec cell with Nate;
another guard repeatedly asked (on camera) why K. would be put in a rec cell with ANYONE, given his record ("It's all stabbings and making weapons.");
• multiple complaints by other prisoners about the defendants putting or leaving them in danger (resulting in multiple stabbings
& assaults).
• specific examples of other stabbings or assaults that WSPF
staff allowed to occur,
• a recent shakedown of the seg unit (holds 40-some prisoners on Admin. Conf., who can go to rec with each other) turned up 30-some weapons,
• despite the weapons found & stabbings that occurred, handheld metal detectors were not used to find shanks, nor were other measures employed to ensure guys locked in rec cells with each other weren't armed,
• despite Nate's near death, nothing was done to prevent further stabbings, resulting in another prisoner & a guard being stabbed in their necks -- only after the guard was stabbed were staff obligated to do more thorough searches. And I have affidavits from two prisoners that confirm defendants knew that their group rec practice was going to result in fights, probably worse, but didn't care.
Defendants declined to seek summary judgement on my 8th Amendment claim. It's going to trial.

Suit 2 of 4
W.D. Wis. 18-cv-1021-sic, Lindell v. Litscher
This is my solitary conf. lawsuit, which Dr. Michael J. Zigmond (zigmond@pitt.edu) provided an expert report for (Dkt. #31). I filed this suit after I was stabbed, trying to heal, while being held in a feces-smeared cell at GBCI. Magistrate Judge Crocker has not finished screening this case, but Dr. Zigmond is a strong opponent to Solitary Conf, is well connected with other experts (e.g. former WDOC Secretary Rick Raemisch) who also oppose Wi's continued use of it (calling it "Restrictive Housing" now), and I intend to fiercely pursue this case.

Suit 3 of 4
E.D. Wis. 18-cv-2027, Lindell v. Meli
One of the reasons that I was held in seg at WSPF resulting in me being stabbed & almost dying, was that I was retaliatorily found guilty of lying about staff in a PREA (Prison Rape Elimination Act) complaint & punished. But I did not lie; prison officials lied, as documents reveal in the Second Amended Complaint (SAC see Dkt. #105), which Judge Duffin allowed me to proceed on (see Dkt. #s 104).
Another prisoner (i.e. Zachary Hayes), who suffered far less, settled an eerily similarly suit (i.e. E.D. Wis. Case #15-cv-1020-pp) against the same defendants for 17,000$. That case is cited in SAC, along with other suits filed against the defendants for PREA retaliation (Dkt. #105 p. 10 16-A3).
I have a motion to compel discovery (Dkt. #88) & to sanction the defendants/the AAG for pursuing a frivolous defense (Dkt. #106) pending.

Suit 4 of 4
E.D. Wis. 19-cv-255, Lindell v. Pollard
With still leaking head wounds from the stabbing, as verified by body-worn camera (BWC) footage that Nate successfully fought to obtain (and Dr. Zigmond possesses), staff in Green Bay Correctional Institution's (GBCI's) seg unit did a strip search on me, moved him into a feces-smeared cell, then denied me cleaning supplies, refused to have the cell cleaned, left me in that filthy cell for almost 3 months, until they transferred me to another prison (for the same reason that they moved me into the feces-smeared cell -- helping other prisoners file complaints & lawsuits & writing exposés about the conditions, posted online).
See my FAC (Dkt. #47), approved by Judge Duffin (Dkt. #46), which includes much of the evidence -- I have affidavits from prisoners supporting him too. Dr. Zigmond has copies of the footage, should you want to review it.

As you can see, I've been through A LOT. Litigating these (and three other also egregious cases) has kept me VERY busy these last four-six months, why my posts have been few & less personal, less about what's currently going on with me in prison...
If you're a journalist interested in interviewing me, set it up by calling the deputy warden (Kevin Garceau) at my prison at 608-742-9103. You may also write me at:
Nate A. Lindell #303724
C.C.I.
P.O. Box 900
Portage, WI 53901-0900

F.N. 1 You may see much of Nate's writings & art on facebook.com/Prometheus Writes. He's had poems published in literary magazines, an essay published in a book, etc.