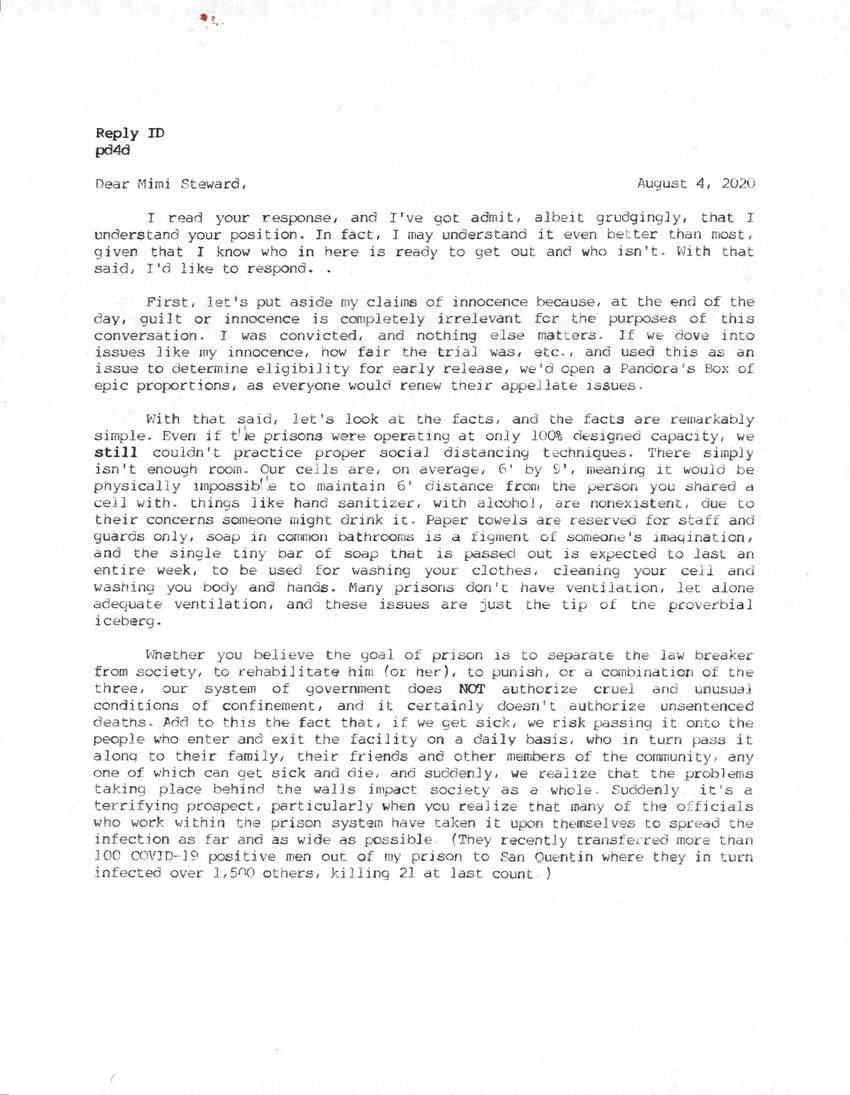 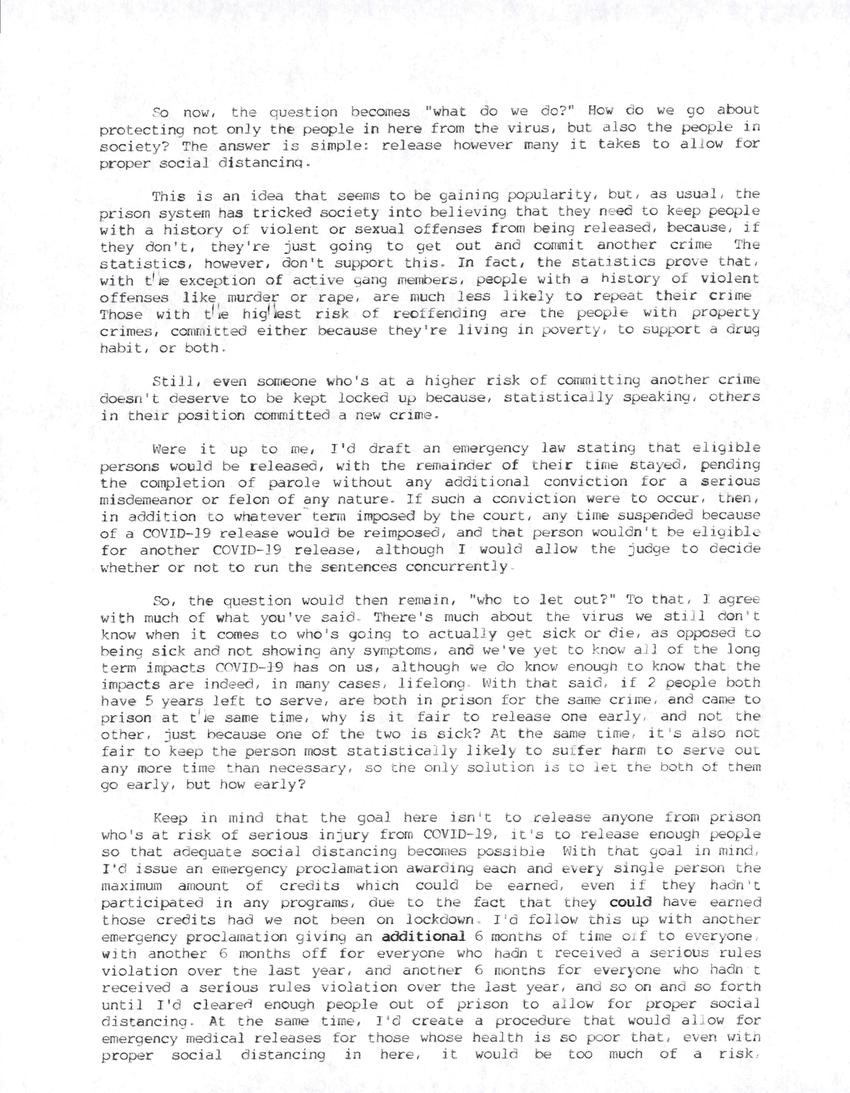 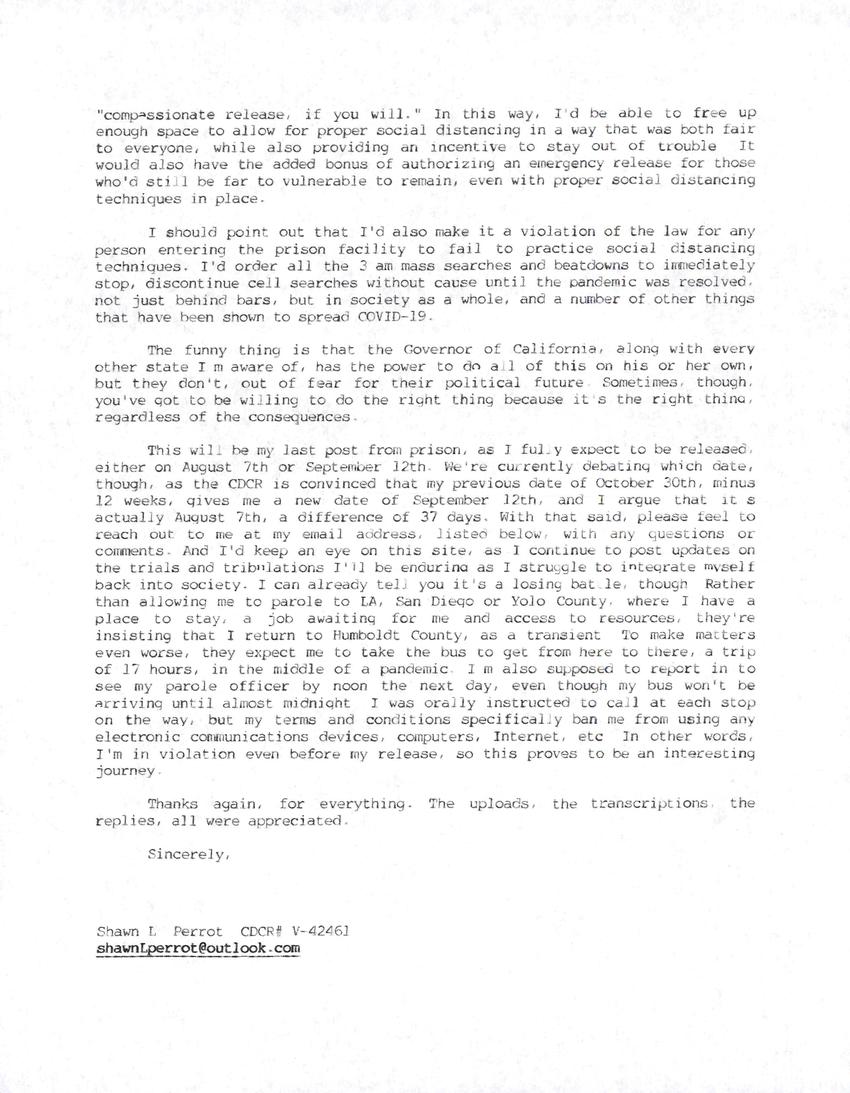 I read your response, and I've got admit, albeit grudgingly, that I understand your position. In fact, I may understand it even better than most, given that I know who in here is ready to get out and who isn't. With that said, I'd like to respond..

First, Let's put aside my claims of innocence because, at the end of the day, guilt or innocence is completely irrelevant for the purposes of this conversation. I was convicted, and nothing else matters. If we dove into issues like my innocence, how fair the trial was, etc., and sued this as an issue to determine eligibility for early release, we'd open a Pandora's Box of epic proportions, as everyone would renew their appellate issues.

With that said, let's look at the facts, and the facts are remarkably simple. Even if the prisons were operating at only 100% designed capacity, we still couldn't practice proper social distancing techniques. There simply isn't enough room. Our cells are, on average, 6' by 9', meaning it would be physically impossibly to maintain 6' distance from the person you shared a cell with. Things like hand sanitizer, with alcohol, are nonexistent, due to their concerns someone might drink it. Paper towels are reserved for staff and guards only, soap in common bathrooms is a figment of someone's imagination, and the single tiny bar of soap that is passed out is expected to last an entire week, to be used for washing your clothes, cleaning your cell, and washing your body and hands. Many prisons don't have ventilation, let alone adequate ventilation, and these issues are just the tip of the proverbial iceberg.

Whether you believe the goal of prison is to separate the law breaker from society, to rehabilitate him (or her), to punish, or a combination of the three, our system of government does NOT authorize cruel and unusual conditions of confinement, and it certainly doesn't authorize unsentenced deaths. Ad to this the fact that, if we get sick, we risk passing it onto the people who enter and exit the facility on a daily basis, who in turn pass it along to their family, their friends and other members of the community, any one of which can get sick and die, and suddenly, we realize that the problems taking place behind the walls impact society as a whole. Suddenly it's a terrifying prospect, particularly when you realize that many of the officials who work within the prison system have taken it upon themselves to spread the infection as far and as wide as possible. (They recently transferred more than 100 COVID-19 positive men out of my prison to San Quentin where they in turn infected over 1,500 others, killing 21 at last count.)

So now, the question becomes "what do we do?" How do we go about protecting not only the people in here from the virus, but also the people in society? The answer is simple release however many it takes to allow for proper social distancing.

This is an idea that seems to be gaining popularity, but, as usual, the prison system has tricked society into believing that they need to keep people with a history of violent or sexual offenses from being released, because, if they don't, they're just going to get out and commit another crime. The statistics, however, don't support this. In fact, the statistics prove that, with the exception of active gang members, people with a history of violent offenses like murder or rape, are much less likely to repeat their crime. Those with the highest risk of reoffending are the people with property crimes, committed either because they're living in property, to support a drug habit, or both.

Still, even someone who's at a higher risk of committing another crime doesn't deserve to be kept locked up because, statistically speaking, others in their position committed a new crime.

Were it up to me, I'd draft an emergency law stating that eligible persons would be released with the remainder of their time stayed, pending the completion of parole without any additional conviction for a serious misdemeanor or felon of any nature. If such a conviction were to occur, then, in addition to whatever term imposed by the court, any time suspended because of COVID-19 release would be reimposed, and that person wouldn't be eligible for another COVID-19 release, although I would allow the judge to decide whether or not to run the sentences concurrently.

So, the question would then remain, "who to let out?" To that, I agree with much of what you've said. There's much about the virus we still don't know when it comes to who's going to actually get sick or die, as opposed to being sick and not showing any symptoms, and we've yet to know all of the long term impacts COVID-19 has on us, although we do know enough to know that the impacts are indeed, in many cases, lifelong. With that said, if 2 people both have 5 years left to serve, are both in prison for the same crime, and came to prison at the same time, why is it fair to release one early, and not the other, just because of of the two is sick? At the same time, it's also not fair to keep the person most statically likely to suffer harm to serve out any more time than necessary, so the only solution is to let the both of them go early, but how early?

Keep in mind that the goal here isn't to release anyone from prison who's at risk of serious injury from COVID-19, it's to release enough people so that adequate social distancing becomes possible. With that goal in mind, I'd issue an emergency proclamation awarding each and every single person the maximum amount of credits which could be earned, even if they hadn't participated in any programs, do to the fact that they *could* have earned those credits had we not been on lockdown. I'd follow this up with another emergency proclamation giving an *additional* 6 months of time off to everyone with another 6 months off for everyone who hadn't received a serious rules violation over the last year, and so on and so forth until I'd cleared enough people out of prison to allow for proper social distancing. At the same time, I'd create a procedure that would allow for emergency medical releases for those whose health is so poor that, even with proper social distancing in here, it would be too much of a risk. "compassionate release, if you will." In this way, I'd be able to free up enough space to allow for proper social distancing in a way that was both fair to everyone, while also providing an incentive to stay out of trouble. It would have the added bonus of authorizing an emergency release for those who'd still be far too vulnerable to remain, even with proper social distancing techniques in place.

I should point out that I'd also make it a violation of the law for any person entering the prison facility to fail to practice social distancing techniques. I'd order all the 3 am mass searches and beatdowns to immediately stop, discontinue cell searches without cause until the pandemic was resolved, not just behind bars, but in society as a whole, and a number of other things that have been shown to spread COVID-19.

The funny thing is that the Governor of California, along with every other state I'm aware of, has the power to do all of this on his or her own, but they don't, out of fear for their political future. Sometimes, though, you've got to be willing to do the right thing because it's the right thing regardless of the consequences.

This will be my last post from prison as I fully expect to be released, either on August 7th or September 12th. We're currently debating which date, though, as the CDCR is convinced that my previous date of October 30th minus 12 weeks, gives me a new date of September 12th, and I argue that it's actually August 7th, a difference of 37 days. With that said, please feel free to reach out to me at my email address, listed below, with any questions or comments. And I'd keep an eye on this site, as I continue to post updates on the trials and tribulations I'll be enduring as I struggle to integrate myself back into society. I can already tell you it's a losing battle, though rather than allowing me to parole to LA, San Diego, or Yolo County, where I have a place to stay, a job awaiting for me and access to resources, they're insisting that I return to Humboldt County, as a transient. To make matters even worse, they expect me to take the bus to get from here to there, a trip of 17 hours, in the middle of a pandemic. I'm also supposed to report in to see my parole officer by noon the next day, even though my bus won't be arriving until almost midnight. I was orally instructed to call at each stop on the way, but my terms and conditions specifically ban me from using any electronic communications devices, computers, Internet, etc. In other words, I'm in violation even before my release, so this proves to be an interesting journey.

Thanks again, for everything. The uploads, the transcriptions, the replies, were all appreciated.