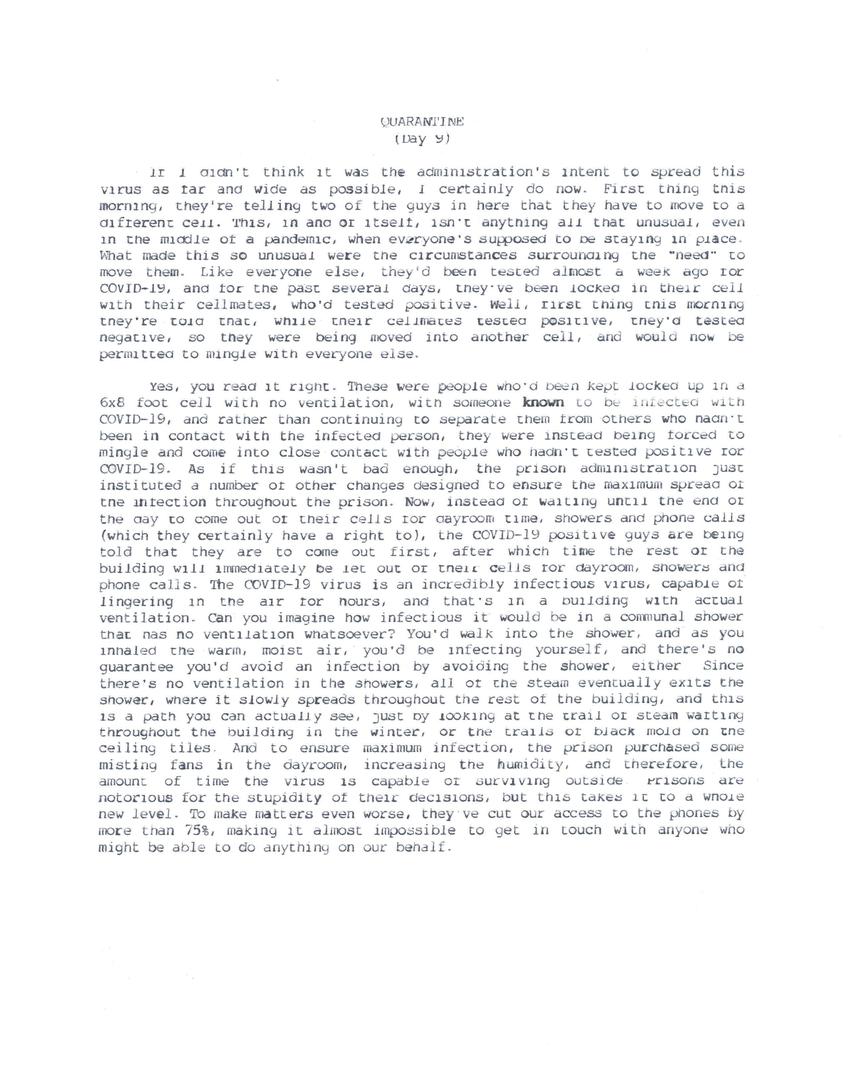 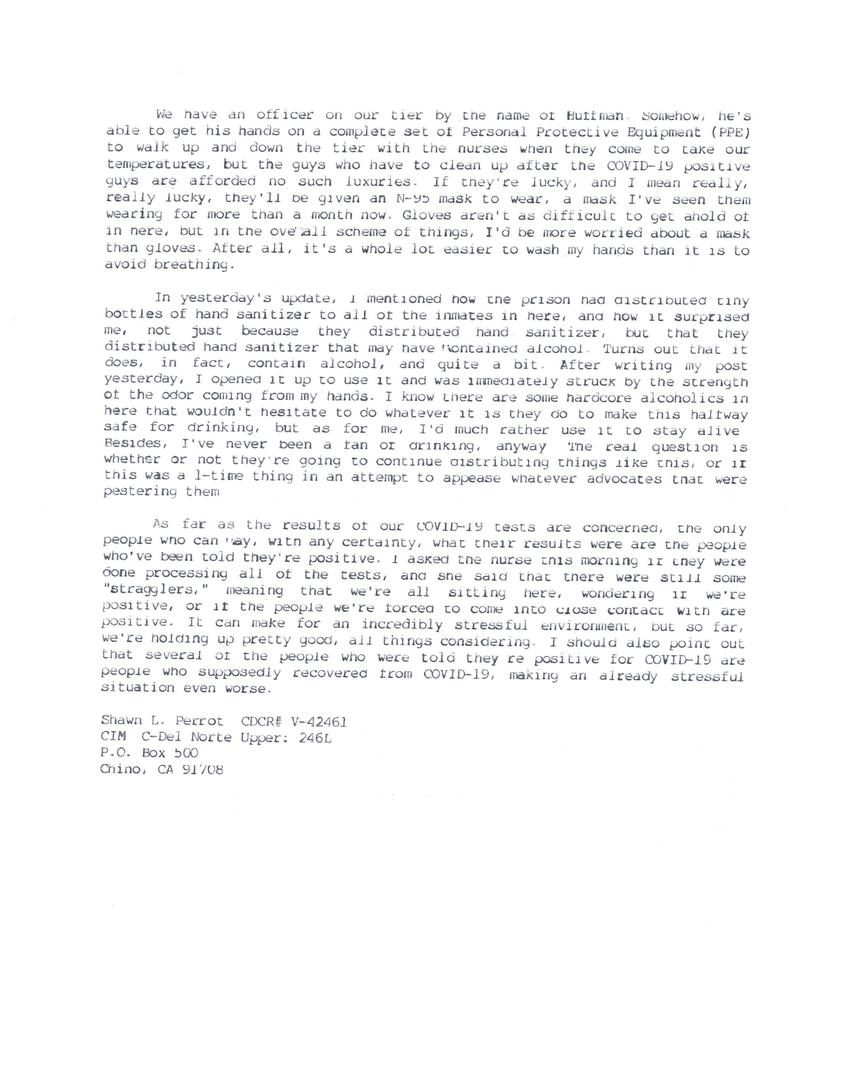 If I didn't think it was the administration's intent to spread this virus as far and wide as possible, I certainly do now. First thing this morning, they're telling two of the guys in here that they have to move to a different cell. This, in and or itself, isn't anything all that unusual, even in the middle of a pandemic, when everyone's supposed to be staying in place. What made this so unusual were the circumstances surrounding the "need" to move them. Like everyone else, they'd been tested almost a week ago for COVID-19, and for the past several days, they've been locked in their cell with their cellmates, who'd tested positive. Well, first thing this morning they're told that, while their cellmates test positive, they'd tested negative, so they were being moved into another cell, and would now be permitted to mingle with everyone else.

Yes, you read it right. These were people who'd been kept locked up in a 6x8 foot cell with no ventilation, with someone known to be infected with COVID-19, and rather than continuing to separate them from others who hadn't been in contact with the infected person, they were instead being forced to mingle and come into close contact with people who hadn't tested positive for COVID-19. As if this wasn't bad enough, the prison administration just instituted a number of other changes designed to ensure the maximum spread of the infection throughout the prison. Now, instead of waiting until the end of the day to come out of their cells for dayroom time, showers and phone calls (which they certainly have a right to), the COVID-19 positive guys are being told that they are to come out first, after which time the rest of the building will immediately be let out of their cells for dayroom, showers and phone calls. The COVID-19 virus is an incredibly infectious virus, capable of lingering in the air for hours, and that's in a building with actual ventilation. Can you imagine how infectious it would be in a communal shower that has no ventilation whatsoever? You'd walk into the shower, and as you inhaled the warm, moist air, you'd be infecting yourself, and there's no guarantee you'd avoid an infection by avoiding the shower, either. Since there's no ventilation in the showers, all of the steam eventually exits the shower, where it slowly spreads throughout the rest of the building, and this is a path you can actually see, just by looking at the trail or steam warding throughout the building in the winter, or the trails or black mold on the ceiling tiles. And to ensure maximum infection, the prison purchased some misting fans in the dayroom, increasing the humidity, and therefore, the amount of time the virus is capable of surviving outside prisons are notorious for the stupidity of their decisions, but this takes it to a whole new level. To make matters even worse, they've cut our access to the phones by more than 75%, making it almost impossible to get in touch with anyone who might be able to do anything on our behalf.

We have an officer on our tier by the name of Huffman. Somehow, he's able to get his hands on a complete set of Personal Protective Equipment (PPE) to walk up and down the tier with the nurses when they come to take our temperatures, but the guys who have to clean up after the COVID-19 positive guys are afforded no such luxuries. If they're lucky, and I mean really, really lucky, they'll be given an N-95 mask to wear, a mask I've seen them wearing for more than a month now. Gloves aren't as difficult to get ahold of in here, but in the overall scheme of things, I'd be more worried about a mask than gloves. After all, it's a whole lot easier to wash my hands than it is to avoid breathing.

In yesterday's update, I mentioned how the prison had distributed tiny bottles of hand sanitizer to all of the inmates in here, and how it surprised me, not just because they distributed hand sanitizer, but that they distributed hand sanitizer that may have contained alcohol. Turns out that it does, in fact, contain alcohol, and quite a bit. After writing my post yesterday, I opened it up to use it and was immediately struck by the strength of the odor coming from my hands. I know there are some hardcore alcoholics in here that wouldn't hesitate to do whatever it is they do to make this halfway safe for drinking, but as for me, I'd much rather use it to stay alive. Besides, I've never been a fan of drinking, anyway. The real question is whether or not they're going to continue distributing things like this, or if this was a 1-time thing in an attempt to appease whatever advocated that were pestering them.

As far as the results of our COVID-19 tests are concerned, the only people who can say, with any certainty, what their results were are the people who've been told they're positive. I asked the nurse this morning if they were done processing all of the tests, and she said that there were still some "stragglers", meaning that we're all sitting here, wondering if we're positive, or if the people we're forced to come into close contact with are positive. It can make for an incredibly stressful environment, but so far, we're holding up pretty good, all things considering. I should also point out that several of the people who were told they're positive for COVID-19 are people who supposedly recovered from COVID-19, making an already stressful situation even worse.