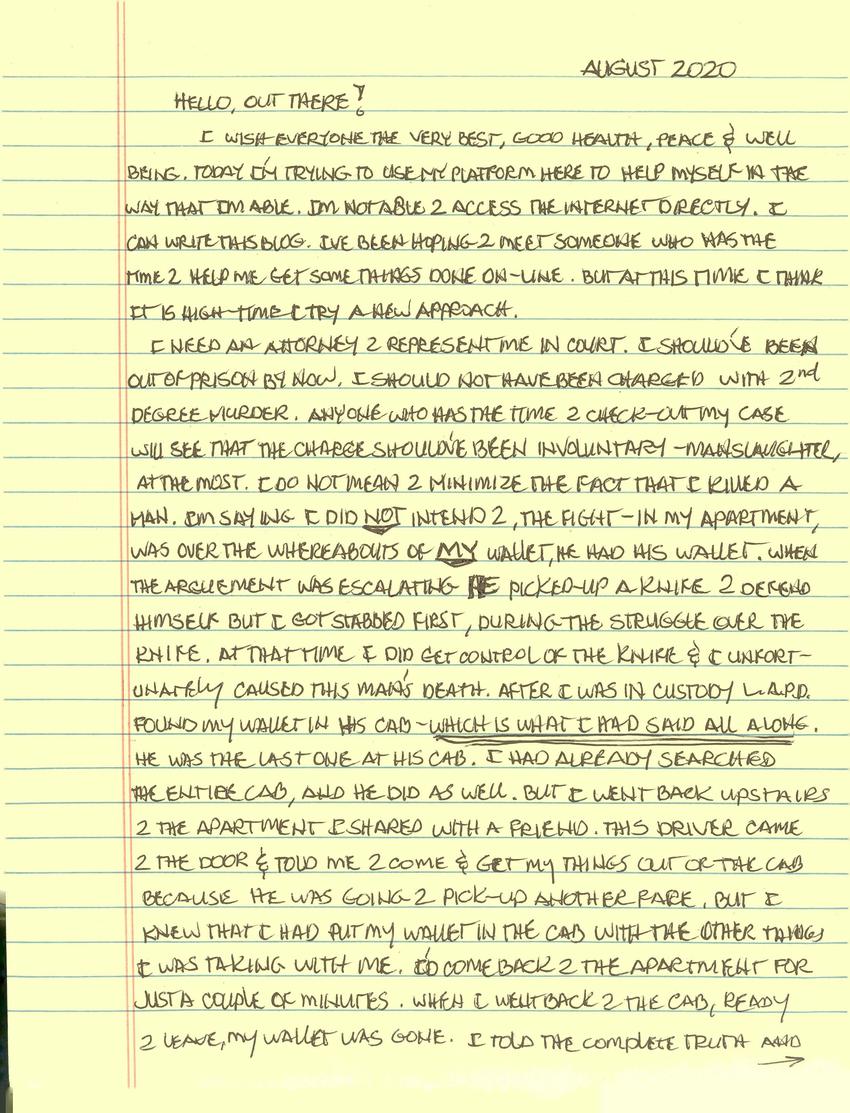 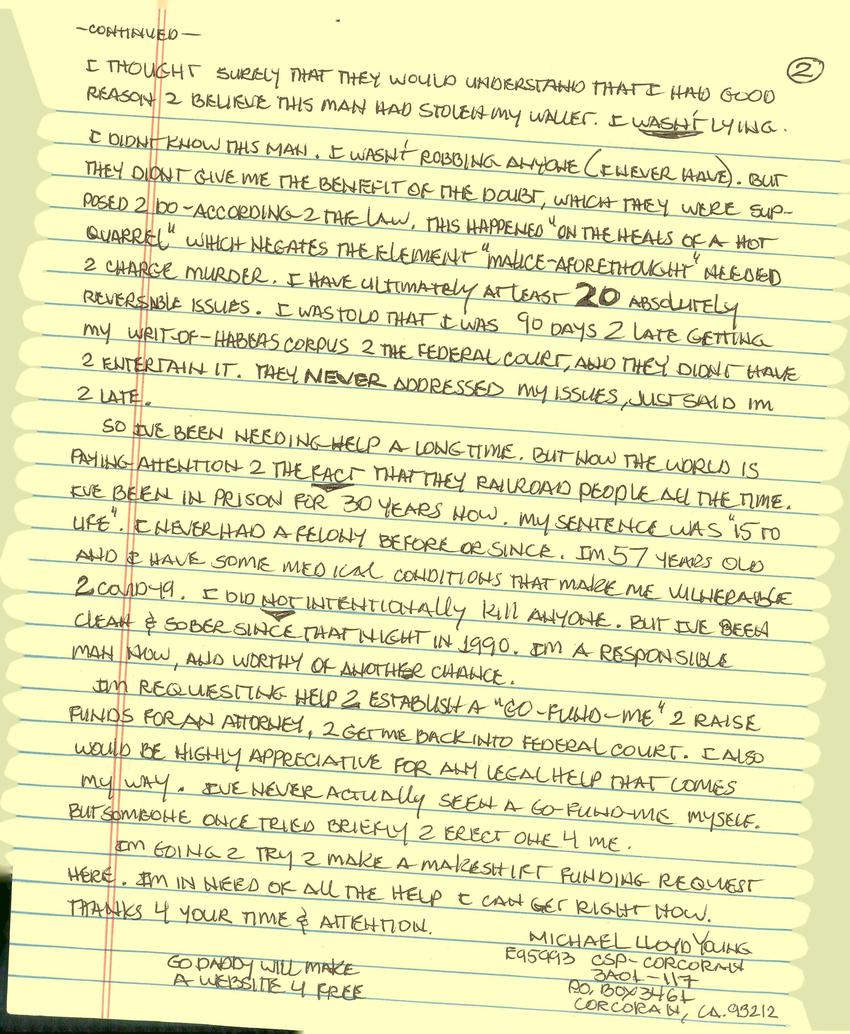 August 2020
Hello, out there!
I wish everyone the very best, good health, peace, and well being. Today I'm trying to use my platform here to help myself in the way that I'm able. I'm notable 2 access the internet directly. I can write this blog, I've been hoping 2 meet someone who has the time 2 help me get some things done on-line. But at this time I think it is high time I try a new approach.
I need an attorney 2 represent me in court. I should've been out of prison by now. I should not have been charged with 2nd degree murder. Anyone who has the time 2 check-out my case will see that the charge should've been involuntary-manslaughter, at the most. I do not mean 2 minimize the fact that I killed a man. I'm saying I did NOT intend 2 . the fight- in my apartment, was over the whereabouts of MY wallet, he had his wallet. When the argument was escalating he picked-up a knife 2 defend himself but I got stabbed first, during the struggle over the knife. At that time I did get control of the knife & I, unfortunately, caused this man's death. After I was in custody LAPD found my wallet in his cab - which is what I had said all along. I was the last one at his cab. I had already searched the entire cab, and he did as well. But I went back upstairs 2 the apartment I shared with a friend. This driver came 2 the door & told me 2 come & get my things out of the cab because he was going 2 pick-up another rage. But I knew that I had put my wallet back in the cab with the other things I was talking with me. I'd come back 2 the can, ready 2 leave my wallet was gone. I told the complete truth and I thought surely that they would understand that I had food reason 2 believe this man had stolen my wallet. I wasn't lying. I didn't know this man. I wasn't robbing anyone (I never have). But they didn't give me the benefit of the doubt, which they were supposed 2 do-according 2 the law. This happened 'on the heels of a hot quarrel' which negates the element' malice-aforethought' needed 2 charge murder. I have ultimately at least 20 absolutely reversible issues. I was told that I was 90 days 2 late getting my writ of habeas corpus 2 the federal court, and they didn't have 2 entertain it. They never addressed my issues, just said I'm 2 late.
So I've been needing help for a long time. But now the world is paying attention 2 the fact that the railroad people all the time. I've been in prison for 30 years now. My sentence was "15 to life" I never had a felony before or since. I'm 57 years old and 2 have some medical conditions that make me vulnerable 2 Covid-19. I did not intentionally kill anyone. But I've been clean and sober since that night in 1990. I'm a responsible man now and worthy of another chance.
I'm requesting help 2 establish a "go-fund-me" 2 raise funds for an attorney, 2 et me back into federal court. I also would be highly appreciative of any legal help that comes my way. I've never actually seen a go-fund-me myself. But someone once tried briefly 2 erect one 4 me.
I'm going 2 try 2 make a makeshift funding request here. Im in need of all the help I can get right now. Thanks 4 your time & attention.
Go Daddy will make a website for free
Michael LLoyd Young
E95993 CSP-CorcoraIX
3A01-117
Po. Box3461
Corcora IX, CA 93212