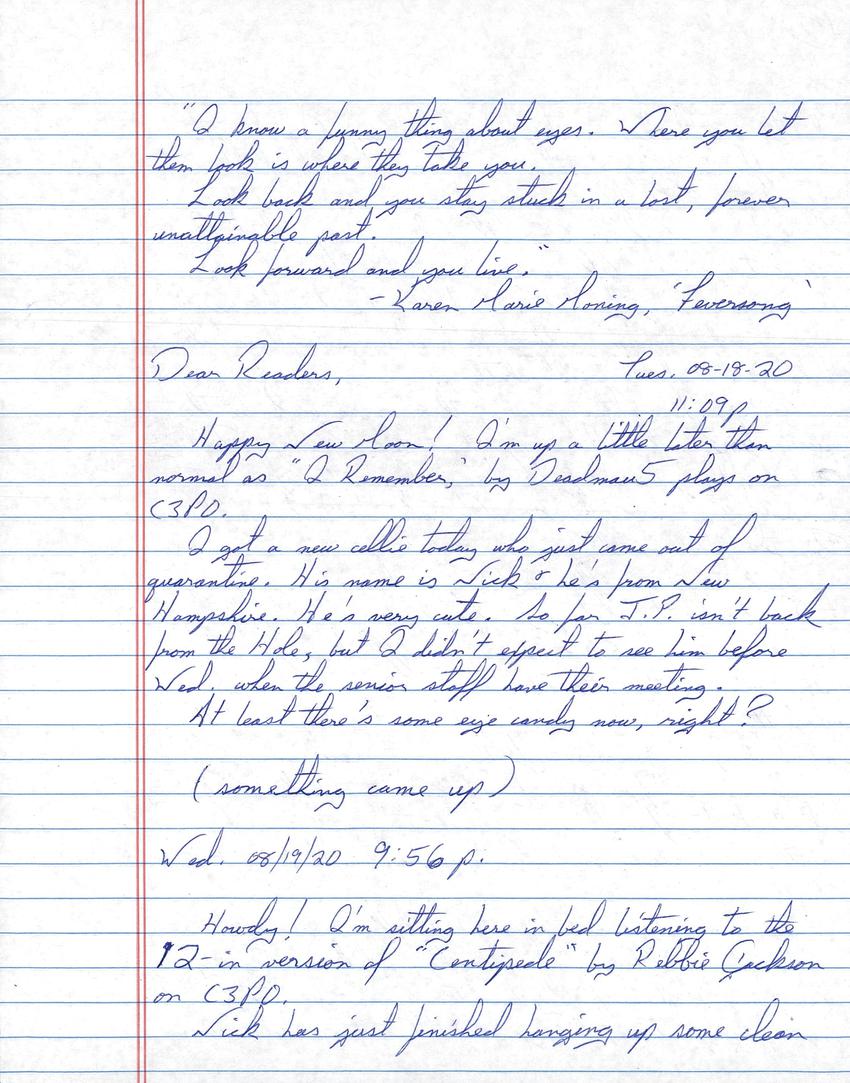 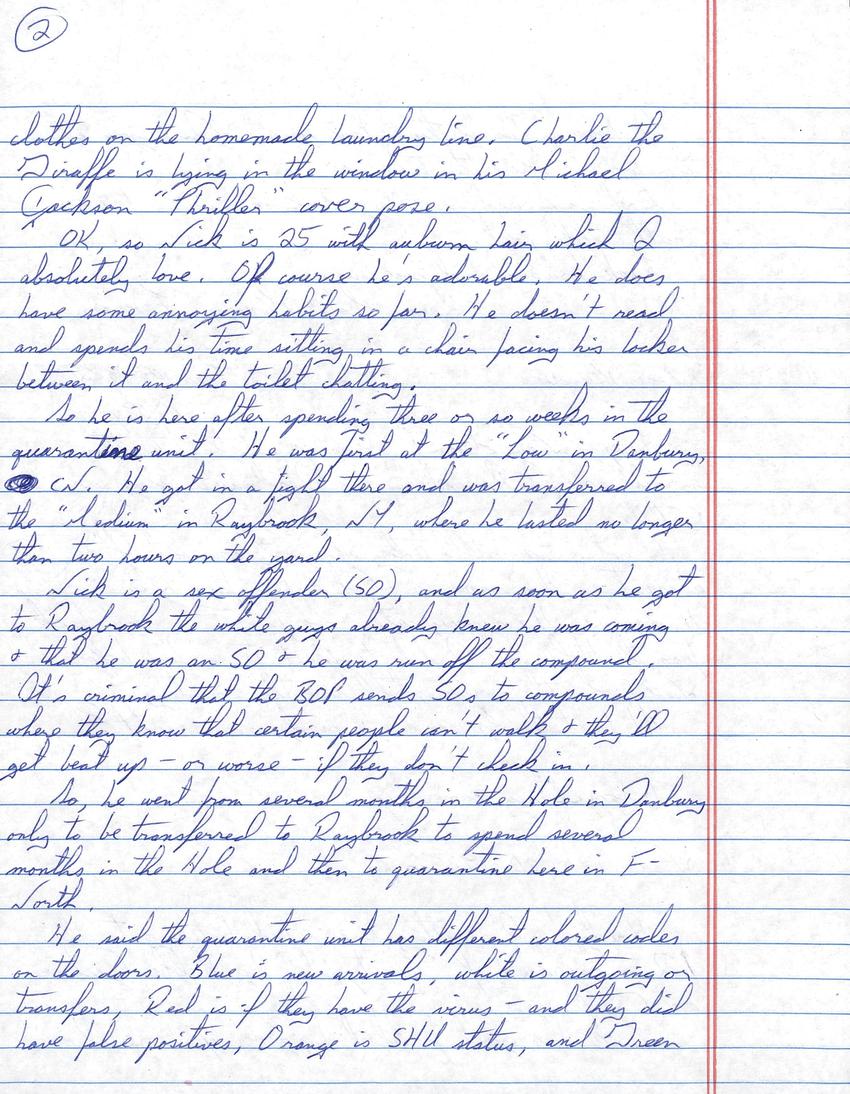 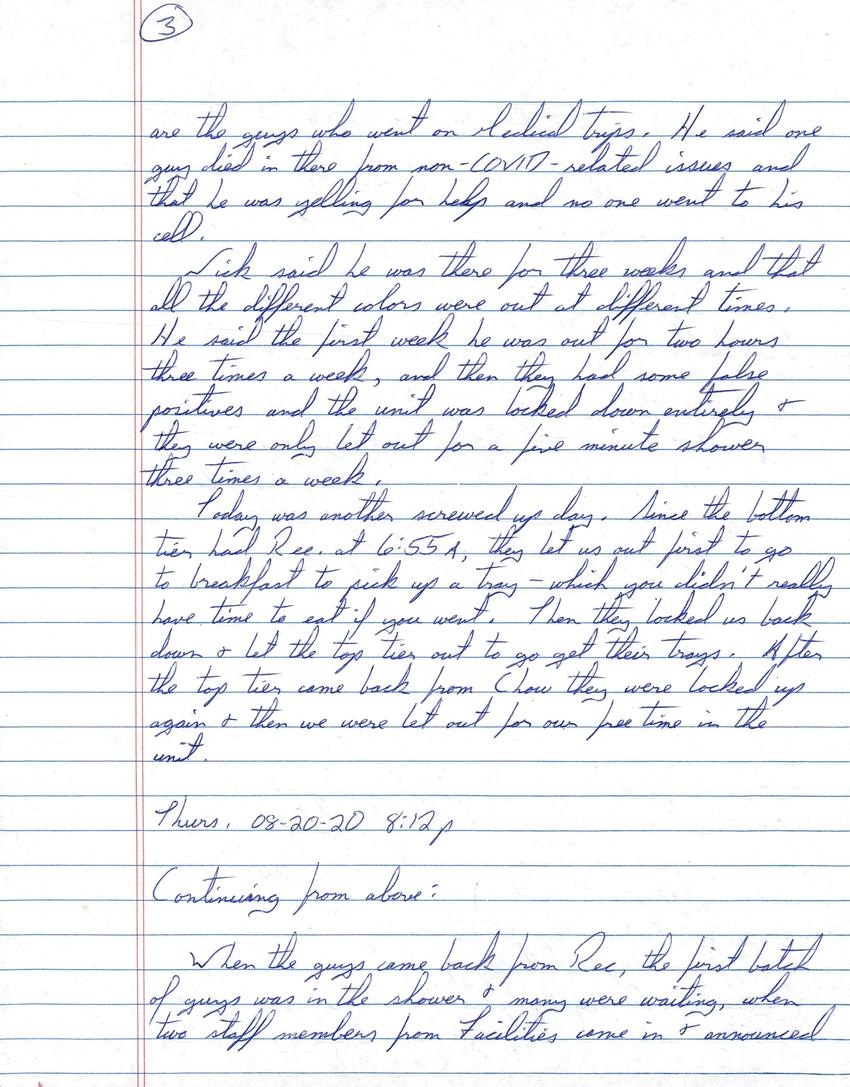 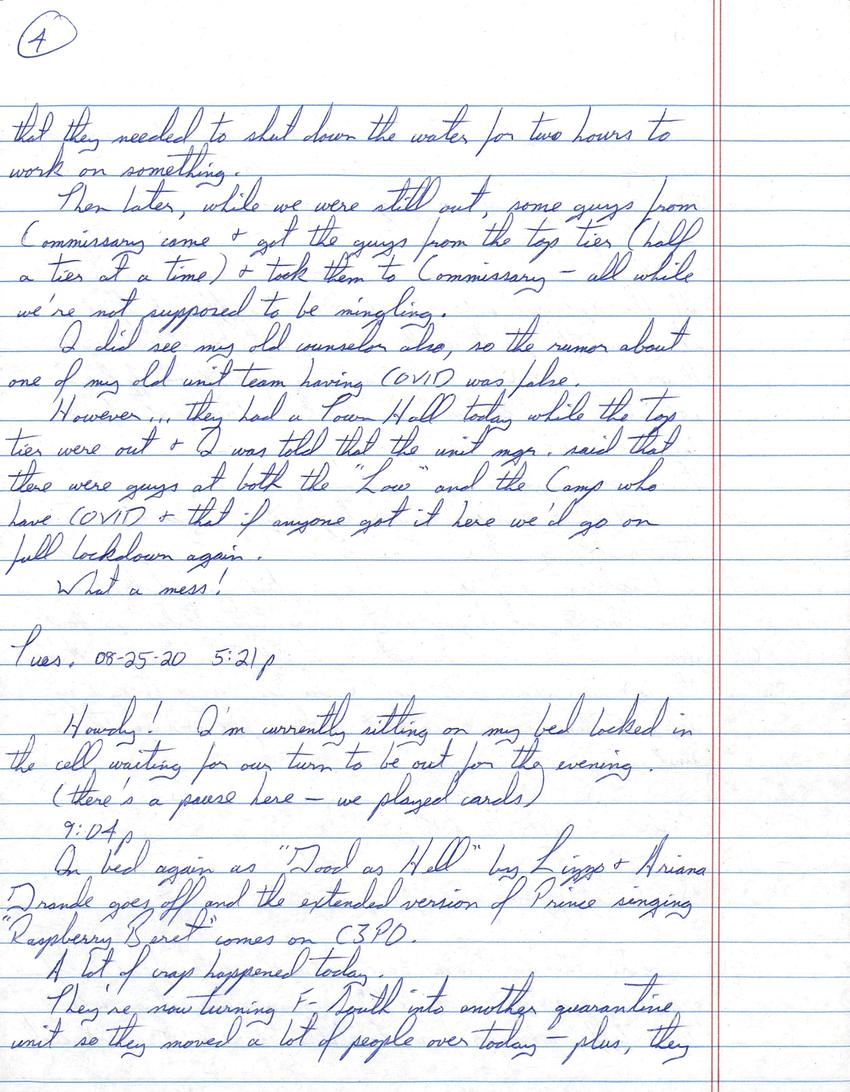 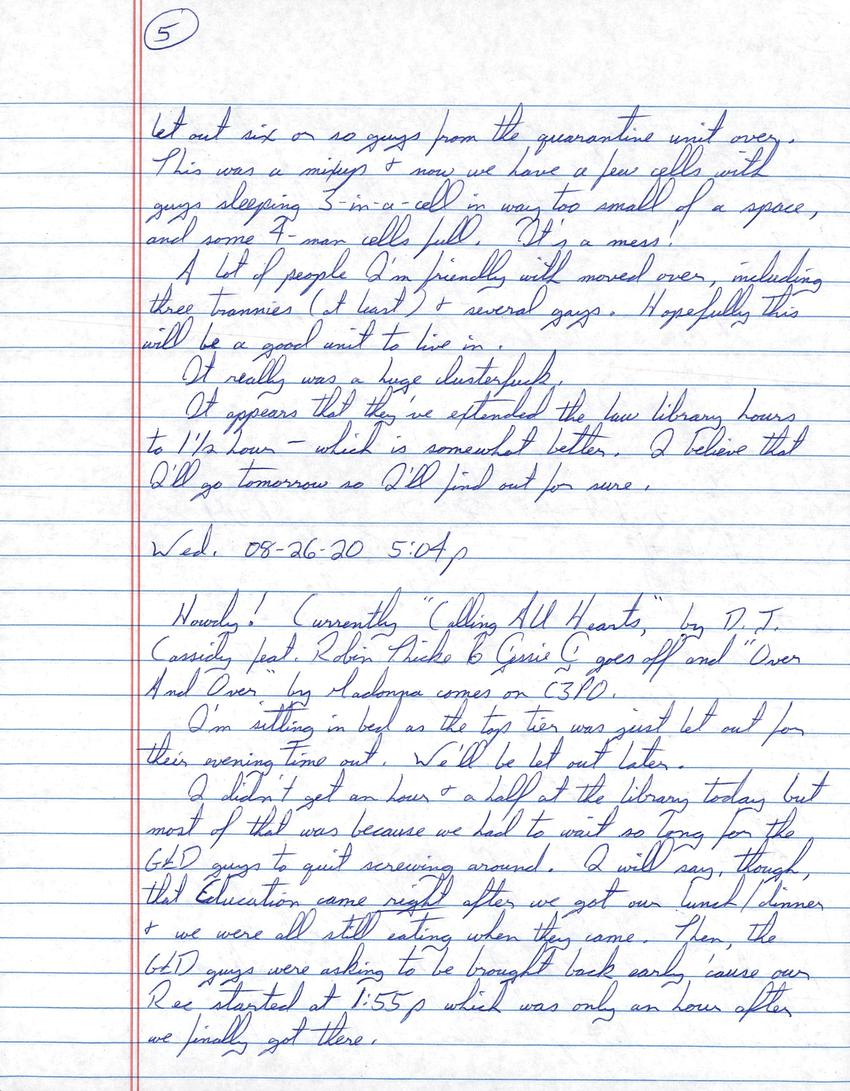 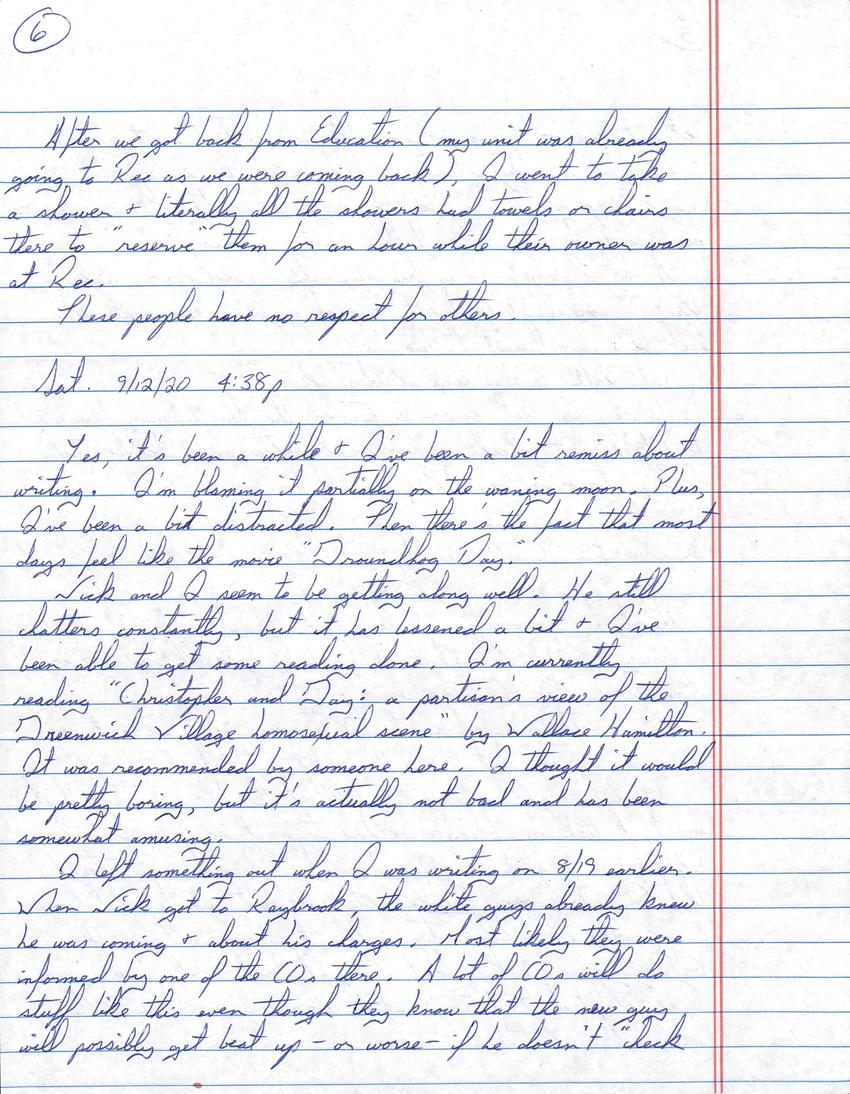 "I know a funny thing about eyes. Where you let them look is where they take you.
Look back and you stay stuck in a lost, forever unattainable past.
Look forward and you live."
-Karen Marie Moning, 'Feversong'

I got a new cellie today who just came out of quarantine. His name is Nick + he's from New Hampshire. He's very cute. So far. J.P isn't back from the Hole, but I didn't expect to see him before Wed. when the senior staff have their meeting.

Howdy! I'm sitting here in bed listening to the 12-in version of "Centipede" by Rebbie Jackson on C3P0.
Nick has just finished hanging up some clean clothes on the homemade laundry line. Charlie the Giraffe is lying in the window in his Michael Jackson "Thriller" cover pose.
Ok, so Nick is 25 with auburn hair which I absolutely love. Of course he's adorable. He does have some annoying habits so far. He doesn't read and spends his time sitting in a chair facing his locker between it and the toilet chatting.
So he is here after spending three or so weeks in the quarantine unit. He was first at the "Low" in Danbury, CN. He got in a fight there and was transferred to the "Medium" in Raybrook, NY, where he lasted no longer than two hours on the yard.
Nick is a sex offender (SO), and as soon as he got to Rangbrook the white guys already knew he was coming + that he was an SO + he was run off the compound. It's criminal that the BOP sends SOs to compounds where they know that certain people can't walk + they'll get beat up - or worse- if they don't check in.
So, he went from several months in the Hole in Dansbury only to be transferred to Raybrook to spend several months in the Hole and then to quarantine here in F-North.
He said the quarantine unit has different colored codes on the doors. Blue is new arrivals, white is outgoing on transfers, Red is if they have the virus-and they did have false positives, Orange is SHU status, and Green are the guys who went on medical trips. He said on guy died in there from non-COVID-related issues and that he was yelling for help and no one went to his cell.
Nick said he was there for three weeks and that all the different colors were out for two hours three times a week, and then they had some false positives and the unit was locked down entirely + they were only let out for a five minute shower three times a week.
Today was another screwed up day. Since the bottom tier had Rec. at 6:55A, they let us out first to go to breakfast to pick up a tray-which you didn't really have time to eat if you went. Then they locked us back down + let the top tier out to get their trays. After the top tier came back from the Chow they were locked up again + then we were let out for our free time in the unit.

When the guys came back from Rec, the first batch of guys was in the shower + many were waiting, when two staff members from facilities came in + announced that they needed to shut down the water for two hours to work on something.
Then later, while we were still out, some guys from Commissary came + got the guys from the top tier (half a tier at a time) + took them to Commissary - all while we're not supposed to be mingling. I did see my old counselor also, so the rumor about one of my old unit team having COVID was fake.
However... they had a Town Hall today while the top tier were out + I was told that the unit mgr. said that there were guys at both the "Low" and the Camp who have COVID + that if anyone got it here we'd go on full lockdown again.
What a mess!

Howdy! I'm currently sitting on my bed locked in the cell waiting for our turn to be out for the evening
(there's a pause here - we played cards)
9:04 p
In bed again as "Good as Hell" by Lizzo + Ariana Grande goes off and the extended version of Prince singing "Raspberry Beret" comes on C3PO.
A lot of crap happened today.
They're now turning f-South into another quarantine unit so they moved a lot of people over today - plus, they let out six or so guys from the quarantine unit over. This was a mixup + now we have a few cells with guys sleeping 3-in-a-cell in way too small of a space, and some 4-man cells full. It's a mess!
A lot of people I'm friendly with moved over, including three trannies (at least) + several gays. Hopefully this will be a good unit to live in.
It really was a huge clusterfuck.
It appears that they've extended the law library hours to 1 1/2 hours - which is somewhat better. I believe that I'll go tomorrow so I'll find out for sure.

Howdy! Currently "Calling All Hearts," by D.J. Cassidy feat. Robin Thick & Jessie J goes off and "Over and Over" by Madonna comes on C3PO.
I'm sitting in bed as the top tier was just let out for their evening time out. We'll be let out later.
I didn't get an hour + a half at the library today but most of that was because we had to wait so long for the GLD guys to quit screwing around. I will say, though, that Education came right after we got our lunch/dinner + we were all still eating when they came. Then, the GLD guys were asking to be brought back early 'cause our Rec started at 1:55p which was only an hour after we finally got there.
After we got back from Education (my unit was already going to Rec as we were coming back), I went to take a shower + literally all the showers had towels or chains there to "reserve" then for an hour while their owner was at Rec.
These people have no respect for others.

Yes, it's been a while + I've been a bit remiss about writing. I'm blaming it partially on the waning moon. Plus, I've been a bit distracted. Then there's the fact that most days feel like the movie "Groundhog Day."
nick and I seem to be getting along well. He still chatters constantly, but it has lessened a bit + I've been able to get some reading done. I'm currently reading "Christopher and Gay: a partisan's view of the Greenwich village homosexual scene" by Wallace Hamilton. It was recommended by someone here. I thought it would be pretty boring, but it's actually not bad and has been somewhat amusing.
I left something out when I was writing on 8/19 earlier. When Nick got to Raybrook, the white guys already knew he was coming + about his charges. Most likely they were informed by one of the COs there. A lot of COs will do stuff like this even though they know that the new guy will possibly get beat up - or worse- if he doesn't "check in" immediately.
Speaking of dirty BOP staff, JP was in the Hole for 12 days. For nothing [underlined: for nothing]. He was speaking to one of the Aws about a legitimate issue + the Warden griped at him for holding up lunch - even though that's the only time we can speak to the staff. After a little back and forth - most of which was the fault of the Warden being a tyrannical dick, at one point JP said, "You're the one that came out of left field and made the smartass comment to me and not vice versa." That's when the Warden had JP locked up.
In his "shot," JP was accused by the Warden of "insolence" and the Warden falsely claimed that JP said, "You're the asshole that told me to leave." Although JP can be a hothead, I completely believe him. This is just another example of the Warden being childish and petty and abusing his authority.
They were supposed to review the latest lockdown/quarantine procedures on the 31st, but nothing has changed. It appears they decided to keep the status quo, which is a real pain in the butt. I was told that the BOP website said that there were a couple of cases of COVID here. You can check that at BOP.GOV.
One guy arrived here who had been transferred to a "Low" a couple years ago + came back 'cause his "points" went back up. He said he was stuck in the transfer center in Oklahoma City for six months. Good God. OKC isn't too bad as far as transfer centers go, but I would really hate to be stuck in Atlanta that long. That place is a shithole.
One last thing: Randy, one of the guys who came from F-South and whom I'm friendly with, was put on "Suicide Watch" yesterday by one of the horrible psychologists here for no reason [underlined: no reason].
Admittedly, Randy does have psyche issues, including a history of suicide attempts - plus, a well-loved aunt of his died this past Tues, However, he was not [underlined: not] suicidal + the psychologist never met with [underlined: never met with] him prior to issuing the suicide watch order.
I don't know if I've ever mentioned Suicide Watch , but it is a horrible experience. The dress you in a blanket/toga + stick you in a cell with the light on always while you're watched over 24 hours a day (some inmates work as "watchers").
It is awful in there and hugely stressful and bad for you psychologically. It's torture. It makes you want to kill yourself. And the staff put him there for no reason [underlined: no reason].
Randy was lucky + was able to get released today, but we expected him to be stuck in there all weekend. Just another day in the BOP.

Until next time, I wish you...
Love + Blessings,
[signature]

Very interesting - keep us updated!
Thanks for writing! I finished the transcription for your post. It was really interesting to hear your story. Your writing style is very captivating! It reads very personal and raw.