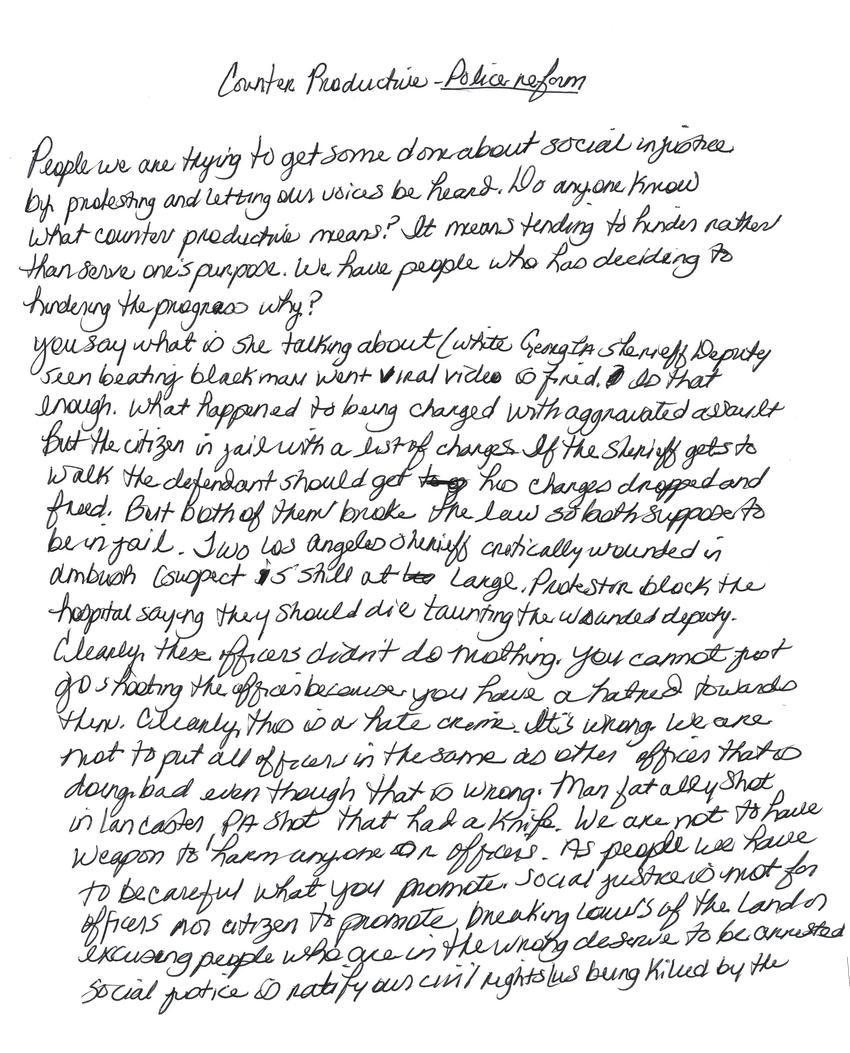 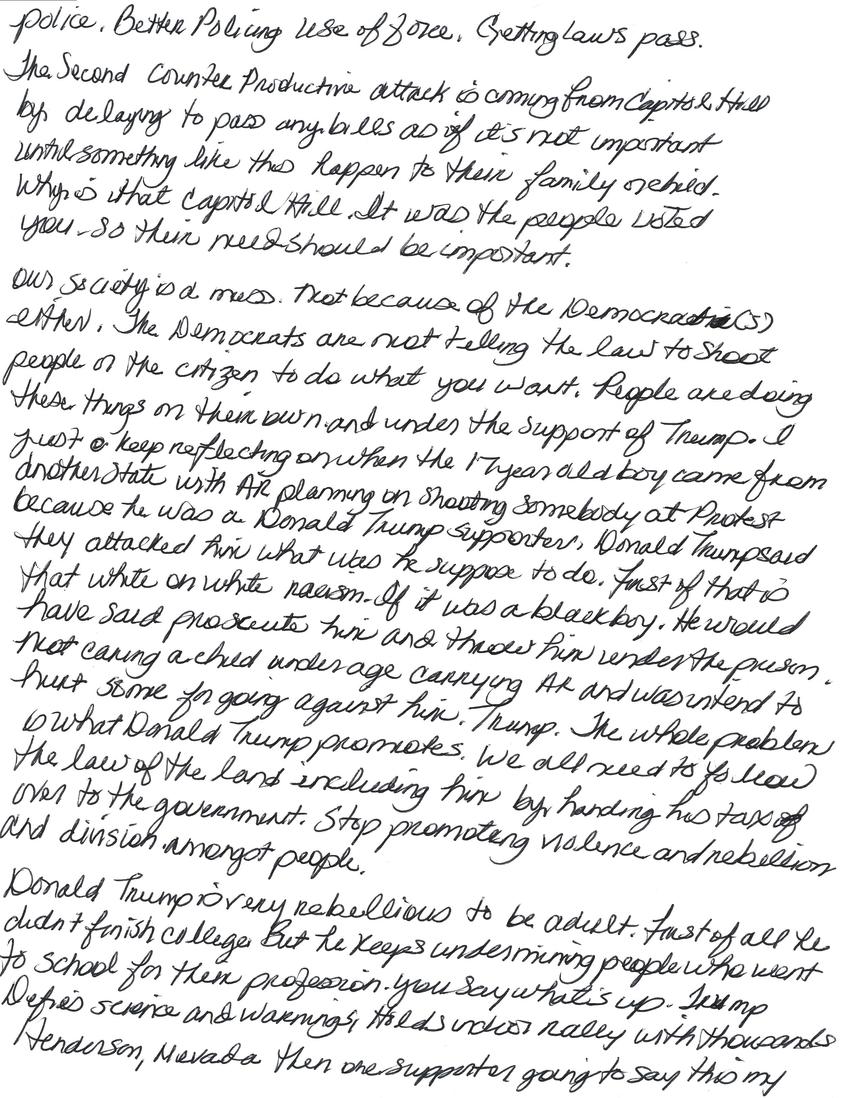 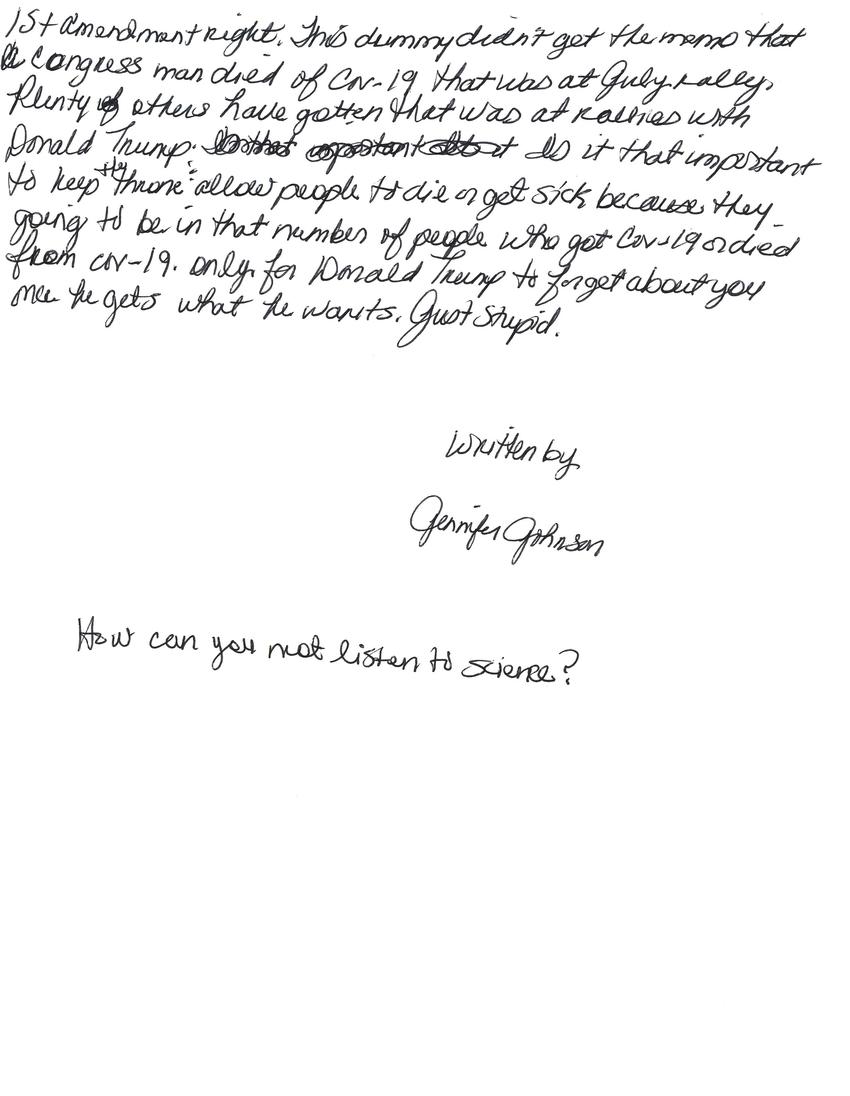 People we are trying to get some done about social injustice
by protesting and letting our voices be heard. Do anyone know
what counter productive means? It means tending to hinder rather
than serve one's purpose. We have people who has deciding to
hindering the progress why?
you say what is she talking about (white Georgia Sheriff Deputy)
seen beating black man went viral video so fired. Is that
enough. What happened to being charged with aggravated assault
but the citizen in jail with a list of charges. If the sheriff gets to
walk the defendant should get his charges dropped and
fired. But both of them broke the law so both suppose to
be in jail. Two Los Angeles sheriff critically wounded in
ambush (suspect is still at large). Protester block the
hospital saying they should die taunting the wounded deputy.
Clearly, these officers didn't do nothing. You cannot just
go shooting the officers because you have a hatred towards
them. Clearly, this is a hate crime. It's wrong. We are
not to put all officers in the same as other officer that
are doing bad even though that is wrong. Man fatally shot
in Lancaster, PA shot that had a knife. We are not to have
weapon to harm anyone or officers. As people we have
to be careful what you promote. Social justice is not for
officers nor citizen to promote. Breaking laws of the land or
excusing people who are in the wrong deserve to be arrested.
Social justice so ratify our civil rights us being killed by the
police. Better policing use of force. Getting laws pass.
The second counter productive attack is coming from Capitol Hill
by delaying to pass any bills as if it's not important
until something like this happen to their family.
Why is that Capitol Hill. It was the people voted
you so their need should be important.
Our society is a mess. Not because of the Democrats either.
The Democrats are not telling the law to shoot
people or the citizen to do what you want. People are doing
these things on their own and under the support of Trump. I
just keep reflecting on when the 17 year old boy came from
another state with AR planning on shooting somebody at protest
because he was a Donald Trump supporter. Donald Trump said
they attacked him what was he supposed to do. First of all, that is
white on white racism. If it was a black boy. He would
have said prosecute him and throw him under the prison.
Not caring a child underage carrying AR and was intend to
hurt some in going against him. Trump. The whole problem
is what Donald Trump promotes. We all need to follow
the law of the land including him by handing his tax
over to the government. Stop promoting violence and rebellion
and division amongst people.
Donald Trump is very rebellious to be adult. First of all he
didn't finish college. But he keeps undermining people who went
to school for their profession. You say what's up. Trump
defies science and warnings, holds another rally with thousands
Henderson, Nevada then one supporter going to say this my
1st amendment right. This dummy didn't get the memo that
Congress man died of CN 19 that was at July rally.
Plenty of others have gotten that was at rallies with
Donald Trump. Is it that important
to keep the throne allow people to die n get sick because they
going to be in that number of people who got Cov-19 and died
from Cov-19. Only for Donald Trump to forget about you
once he gets what he wants. Just stupid.
Written by
Jennifer Johnson

How can you not listen to science?