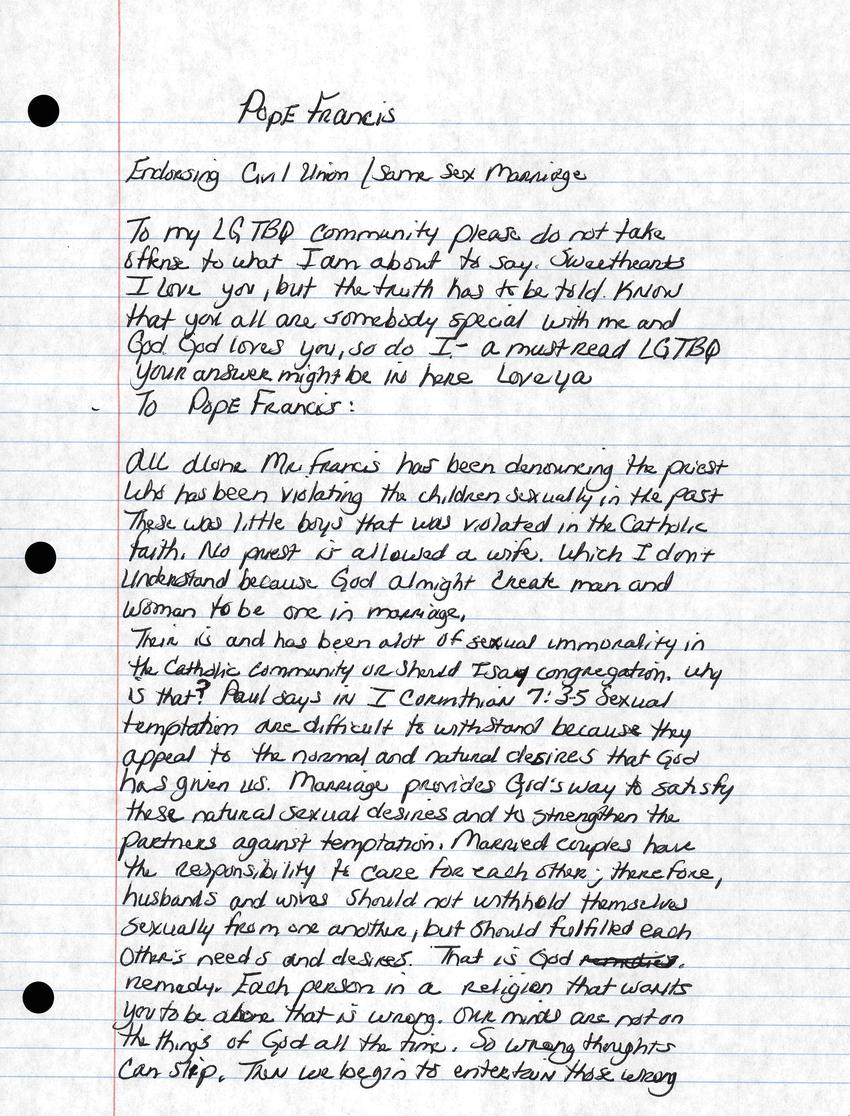 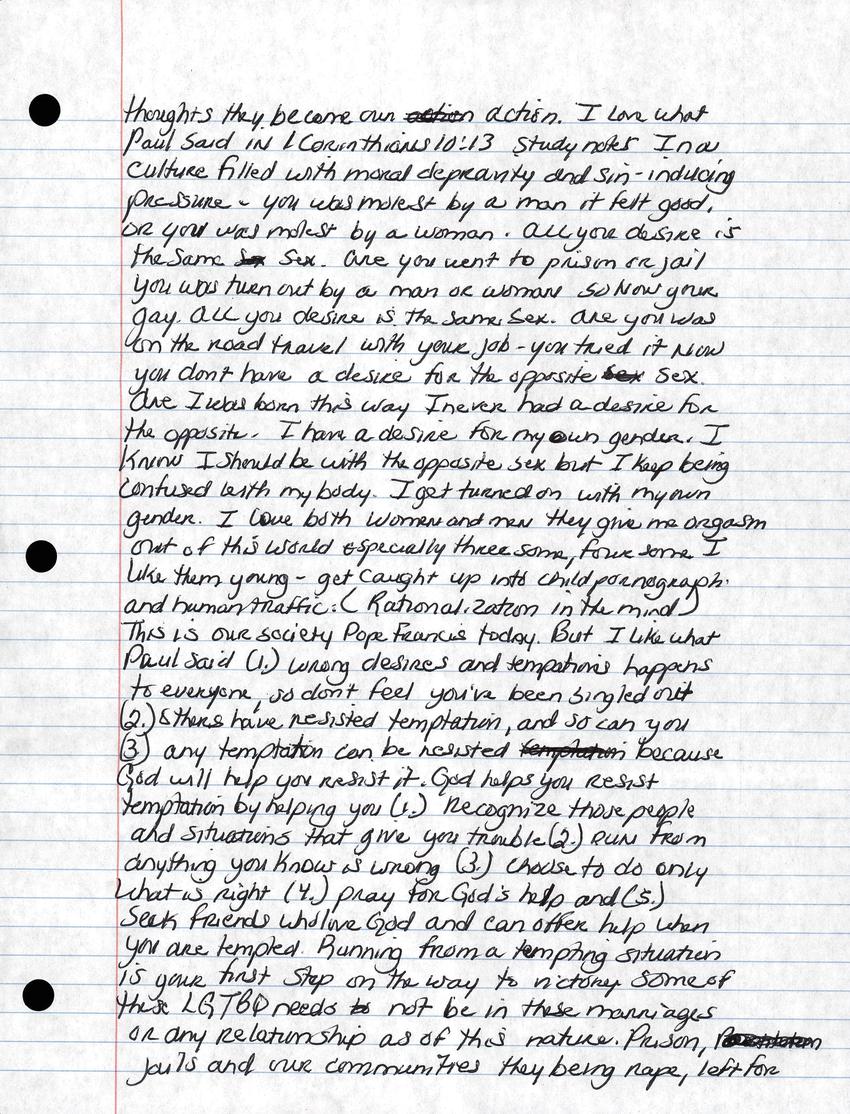 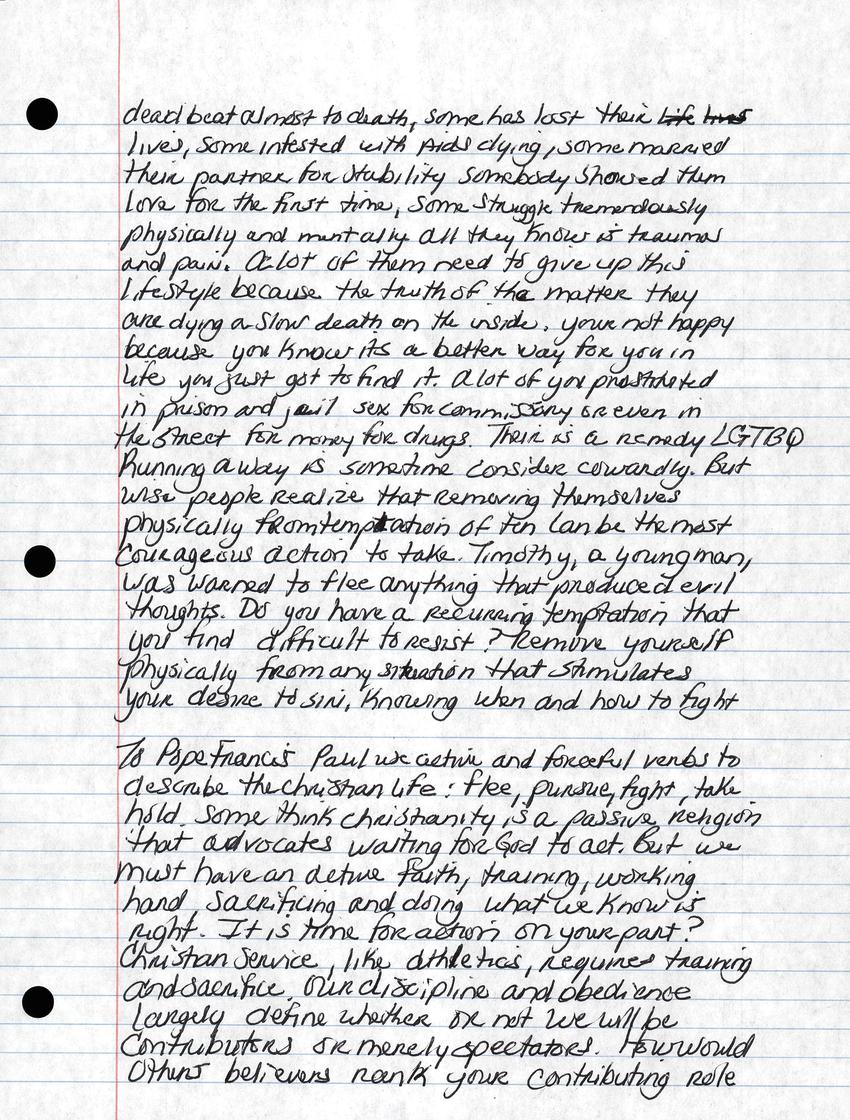 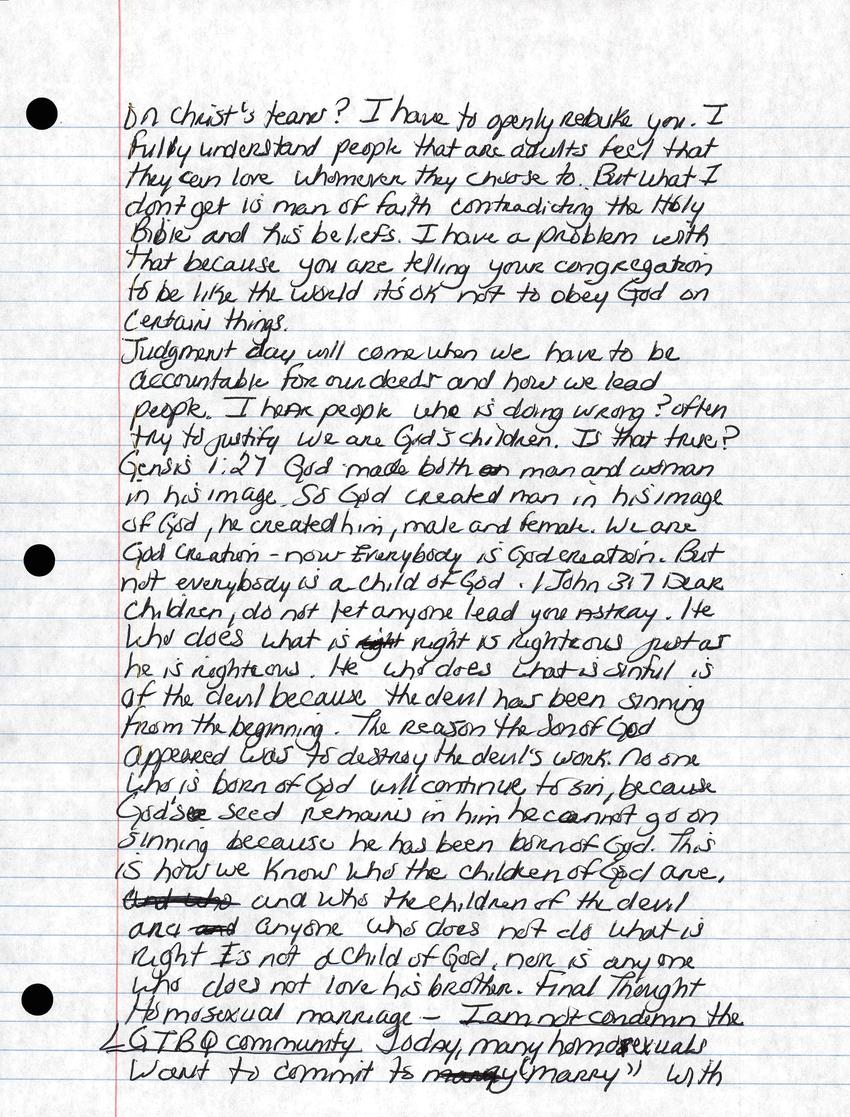 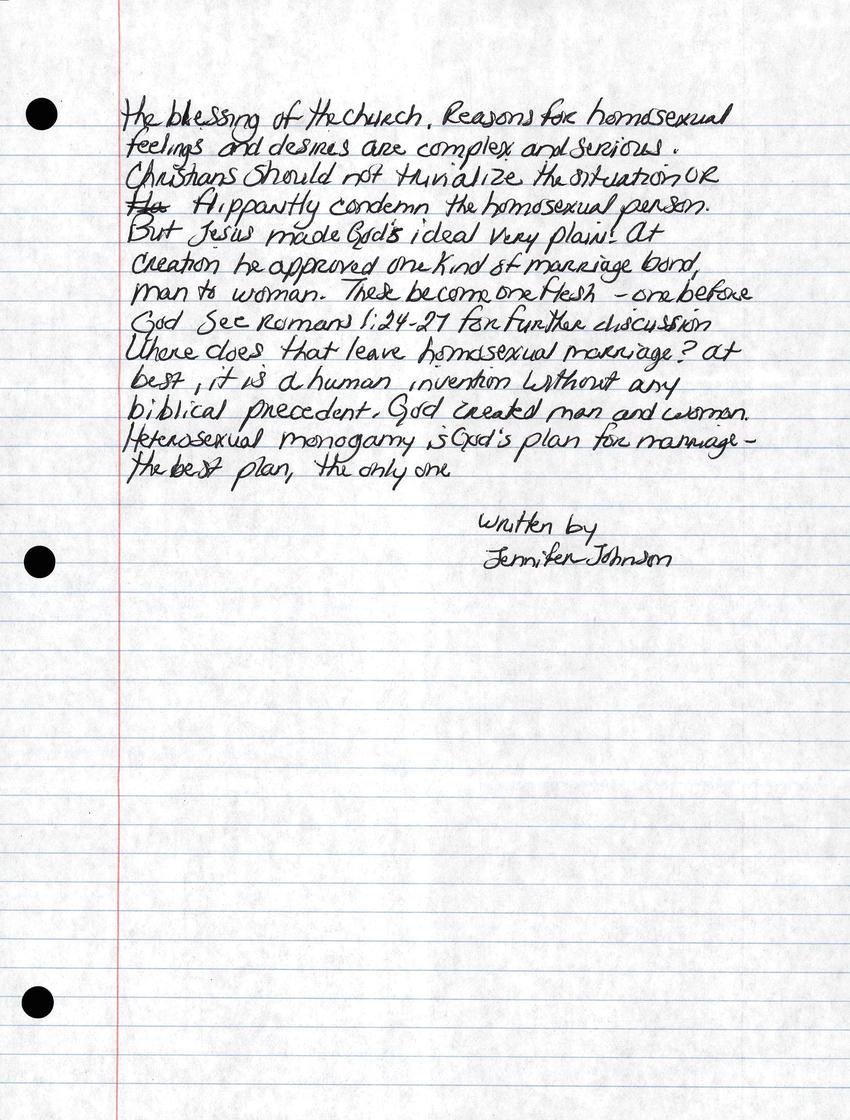 To my LGTBQ community please do not take offence to what I am about to say. Sweethearts I love you, but the truth has to be told. Know that you are all somebody special with me and God. God loves you, so do I - a must read LGTBQ your answer might be in here Love ya
To Pope Francis:

all alone Mr. Francis has been denouncing the priest who has been violating the children sexually in the past These was little boys that was violated in the Catholic faith. No priest is allowed a wife. Which I don't understand because God almight create man and woman to be one in marriage. Their is and has been a lot of sexual immorality in the Catholic community or should I say congregation. Why is that? Pail says in I Corinthian 7:3-5 Sexual temptation are difficult to withstand because they appeal to the normal and natural desires that God has given us. Marriage provides God's way to satisfy these natural sexual desires and to strengthen the partners against temptation. Married couples have the responsibility to care for each other, therefore, husbands and wives should not withhold themselves sexually form on another, but should fulfilled each other's needs and desires. That is God remedy. Each person in a religion that wants you to be alone that is wrong. Our minds are not on the things of God all this time. So wrong thoughts can slip. Then we begin to entertain those wrong thoughts they become our action. I love what Paul said in I Corinthians 10:13 study notes In a culture filled with moral depravity and sin-inducting pressure. You was molest by a man it felt good. Or you was molest by a women. All you desire is the same sex. Are you went to prison or jail you was turn out by a man or woman so now your fay. All you design is the same sex. Are you was on the road travel with your job - you tried it now you don't have a desire for the opposite sex. Are I was born this way I never has a desire for the opposite. I have a desire for my own gender. I know I should be with the opposite sex but I keep being confused with my body. I get turned on with my own genger. I love both women and men they give me orgasm out of this world especially threesome, foursome. I like them young - get caught up into child pornograph and human traffic: (Rational.zatron in the mind) This is our society Pope Francis today. But I like what Paul said (1) wrong desired and temptations happens to everyone, so don't feel you've been singled out. (2.) Others have resisted temptations, and so can you (3.) any temptation can be resisted because God will help you resist it. God helps you resist temptation by helping you (1.) recognize those people and situations that give you trouble (2.) Run from anything you know is wrong (3.) choose to do only what is right (4.) pray for God's help and (5.) seek friends who love God and can offer help when you are tempted. Runny from a tempting situation is your first step on the way to victory. Some of these LGTBQ need to not be in these marriages or any relationship as of this nature. Prison, Jails, and our communities they being rape, left for dead beat almost to death, some has lost their lives, some infested with Aids dying, some married their partner for stability somebody showed them love for the first time, some struggle tremendously phycially and mentally All they know is trauma and pain. Alot fo them need to give up this lifestyle because you know its a better way for you in life you just got to find it. Alot of your prostituted in prison and jail sex for commission or even in the street for money for drugs. Their is a remedy LGTBQ Running away is sometime consider cowardly. But wise people realize that removing themselves physically from temptation often can be the most courageous action to take. Timothy, a young man, was warned to flee anything that produced evil thoughts. Do you have a recurring temptation that you find difficult to resist? Remove yourself physically from any situation that stimulated your desire to sin, knowing when and how to fight.

To Pope Francis Paul use active and forceful verbs to describe the Christian life: flee, pursue, fight, take hold. Some think Christianity is a passive religion that advocates waiting for Fod to act. Byt we must have an active faith, training, working hard, sacrificing and doing what we know is right. It is time for action on your part? Christian service, like athletics, required training and sacrifice. Our discipline and obedience largely define whether or not we will be contributed or merely spectators. How would other believers rank your contributing role on Christs's team? I have to openly rebuke you. I fully understand people that are adults feel that they can love whomever they chose to. But what I don't get is man of faith contradicting the Holy Bible and his beliefs. I have a problem with that because you are telling your congregation to be like the world it's ok not to obey God on certain things.
Judgment day will come when we have to be accountable for our deeds and how we lead people. I hope people who is doing wrong? often try to justify we are God's children. It that true? Genesis 1:27 God made both man and woman in his image. So God created man in his image of God, he created him, male and female. We are God creation - now Everybody is God creation. But not everybody is a child of God. I John 3:7 Dear children, do not let anyone lead you astray. He who does what is right is righteous just as he is righteous. He who does what is sinful is of the devil because the devil has been sinning from the beginning. The reason the Son of God appeared was to destroy the devil's work. No one who is born of God will continue to sin, because God's seed remains in him he cannot go on sinning because he has been born of God.This is how we know who the children of God are, and who the children of the devil are anyone who does not do what is right Is not a child of God, nor is anyone who does not love his brother. Final thought Homosexual marriage - [underline begin] I am not condemn the LGTBQ community [underline end] Today, many homosexuals want to commit to "marry" with the blessing of the church. Reason for homosexual feelings and desires are complex and serious. Christians should not trivialize the situation or flippantly condemn the homosexual person. But Jesus made God's ideal very plain. At creation he approved one kind of marriage bond, man to woman. These become one flesh - one before God See Romans 1:24-27 for further discussion Where does that leave homosexual marriage? At best, it is a human invention without any biblical precedent. God created man and woman Heterosexual monogamy is God's plan for marriage - the best plan, the only one.

I hope you have a lovely day! 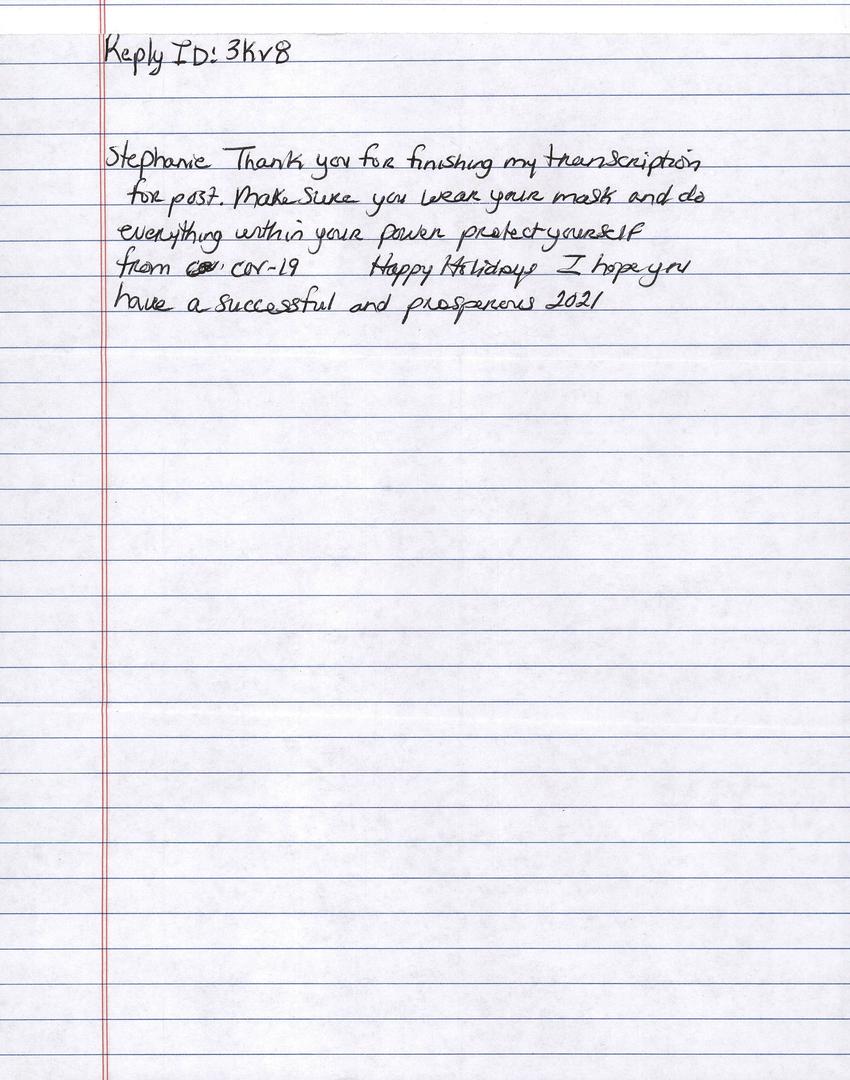