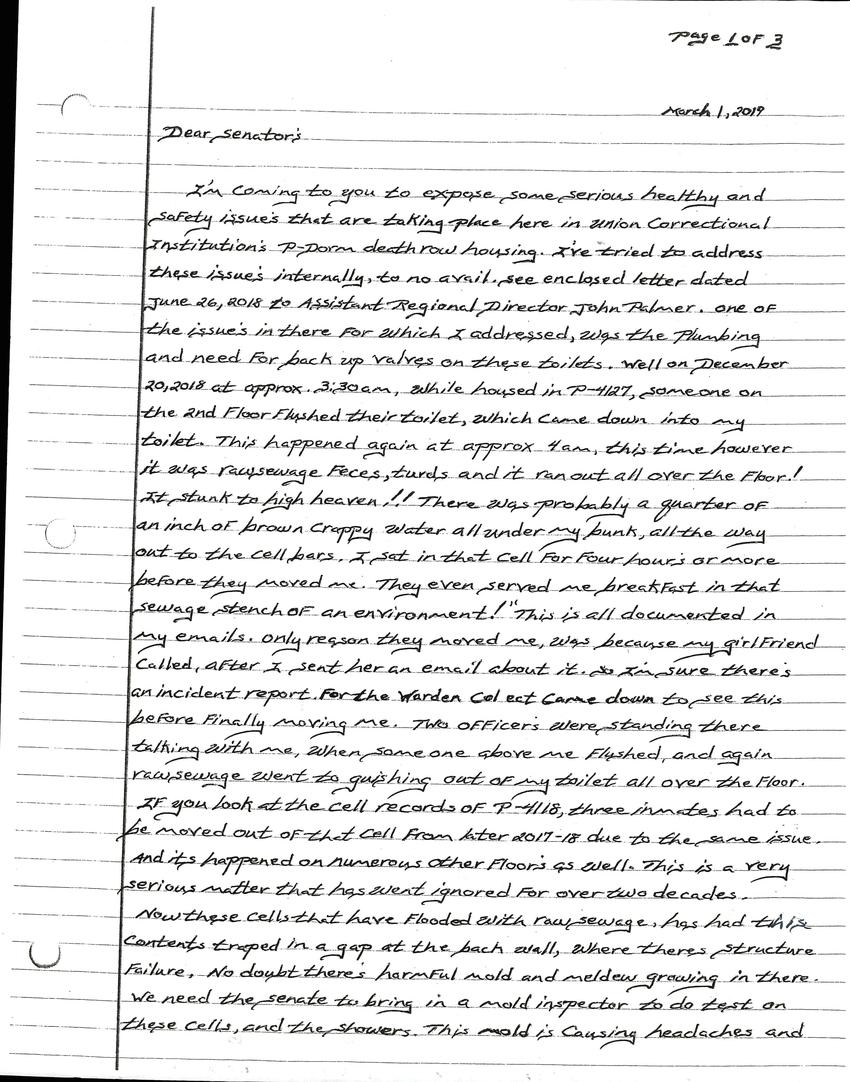 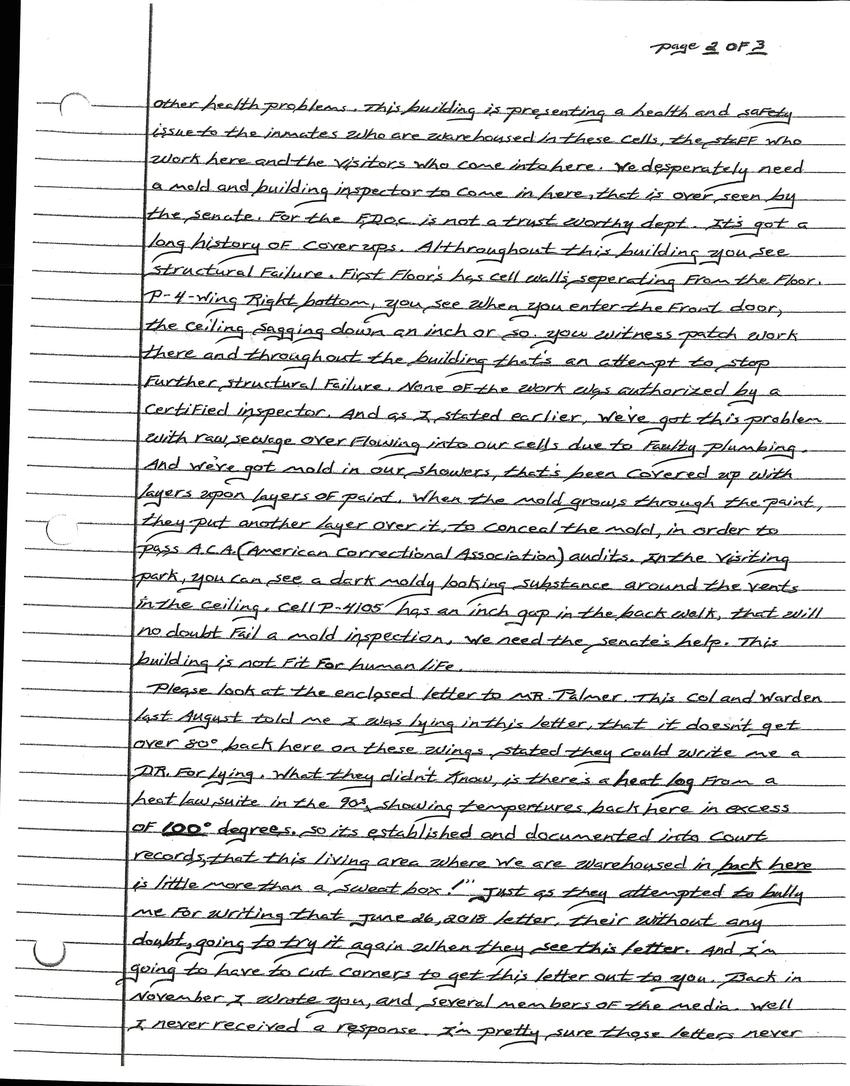 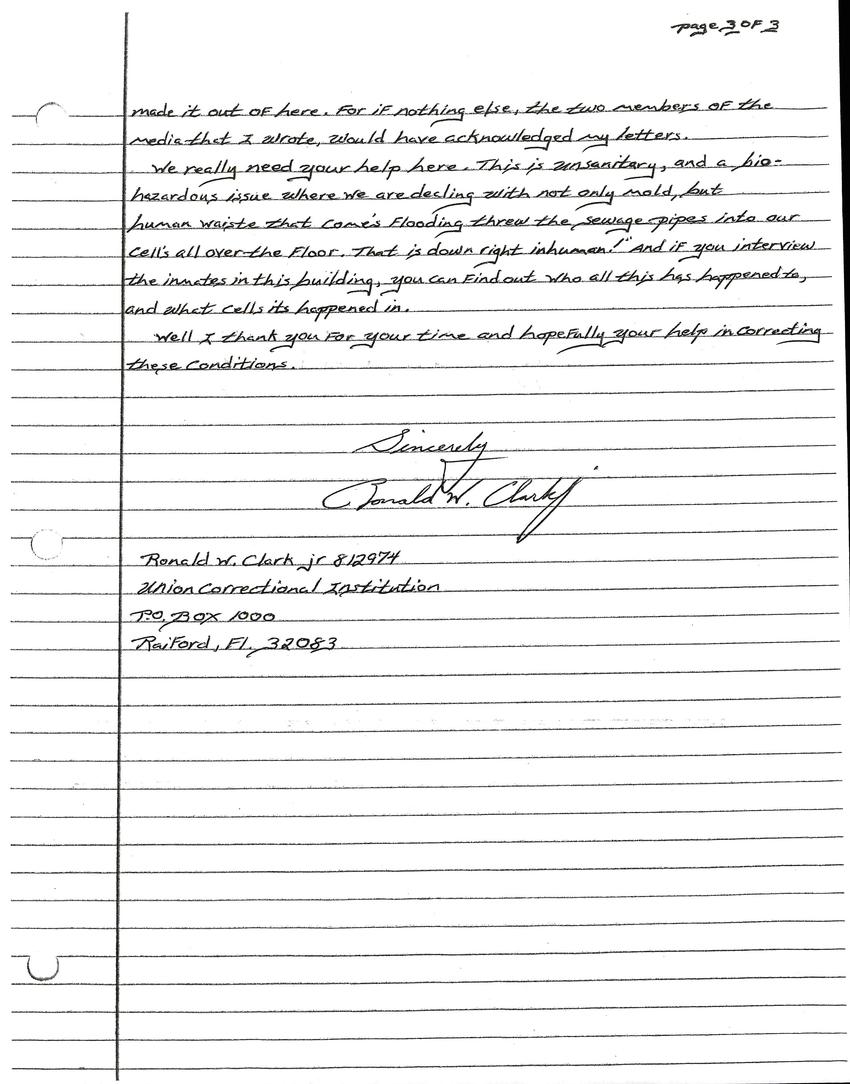 I'm coming to you to expose some serious health and safety issues that are taking place here in union correctional institutions P-Dorm death row housing. I've tried to address these issues internally, to no avail. See enclosed letter dated June 26, 2018, to Assistant Regional Director, John Palmer. One of the issues in there for which I addressed eas the plumbing and need for backup valves on these toilets. Well on December 20, 2018, at approx. 3:30 AM, while housed in P-4127, someone on the 2nd floor flushed their toilet, which came down into my toilet. This happened again at approx. 4 AM, this time, however, it was raw sewage feces, turds, and it ran out all over the floor! It stunk to high heaven!! There was probably a quarter of an inch of brown crappy water all under my bunk, all the way out to the cell bars. I sat in that cell for four hours or more before they moved me. They even served me breakfast in that sewage stench of an environment! "This is all documented in my emails. The only reason they moved me was because my girlfriend called after I sent her an email about it. So, I'm sure there's an incident report. For the Warden Collect came down to see this before finally moving me. Two officers were standing there talking with me when someone above me flushed, and again raw sewage went to gushing out of my toilet all over the floor. If you look at the cell records of P-4118, three inmates had to be moved out of that cell from later 2107-18 due to the same issue, and it happened on numerous other floors as well. This is a very serious matter that has gone ignored for over two decades. Now these cells that have flooded with raw sewage have had these contents trapped in a gap at the back wall where there's structure failure. No doubt there's harmful mold and mildew growing in there. We need the Senate to bring in a mold inspector to do tests on these cells, and the showers. This mold is causing headaches and other health problems. This building is presenting a health and safety issue to the inmates who are warehoused in these cells, the staff who work here, and the visitors who come into here. We desperately need a mold and building inspector to come in here that is overseen by the Senate. For the FDOC is not a trustworthy dept. It's got a long history of cover-ups. All throughout this building, you see structural failure. The first floor has cell walls separating from the floor. P-4-Wing right bottom, you see when you enter the front door, the ceiling sagging down an inch or so. You witness patchwork there and throughout the building that's an attempt to stop further structural failure. None of the work was authorized by a certified inspector. And as I stated earlier, we've got this problem with raw sewage overflowing into our cell due to faulty plumbing. We've got mold in our showers that's been covered up with layers upon layers of paint. When the mold grows through the paint, they paint another layer over it to conceal the mold in order to pass A.C.A ( American Correctional Association) audits. In the visiting park, you can see a dark moldy looking substance around the vents and the ceiling. Cell P-4105 has an inch hap in the back wall that will no doubt fail a mold inspection. We need the Senate's help. This building is not fit for human life.
Please look at the enclosed letter to Mr. Palmer. This Col and Warden last August told me I was lying in this letter that it doesn't get over 80 degrees back here on these wings. Stated they could write me a DR for lying. What they didn't know, is there's a heat log from a heat law suit in the '90s showing temperatures back here in excess of 100 degrees. So, it's established and documented into court records that this living area where we are warehoused back here is little more than a sweatbox!" Just as they attempted to bully me for writing that June 25, 2018 letter, they're without any doubt to have to cut corners to get this letter out to you. Back in November, I wrote you and several members of the media. Well, I never received a response. I'm pretty sure those letters never made it out of here. For if nothing else, the two members of the media I wrote, would have acknowledged my letters.
We really need your help here. This is an unsanitary, and biohazardous issue. Where we are dealing with not only mold but human waste that comes flooding through the sewage pipes into our cells all over the floor. That is downright inhuman! And if you interview the inmates in this building, you can find out who all this has happened to, and what cells it has happened in.
Well, I thank you for your time and hopefully your help in correcting these conditions.
Sincerely,
Ronald W. Clark jr