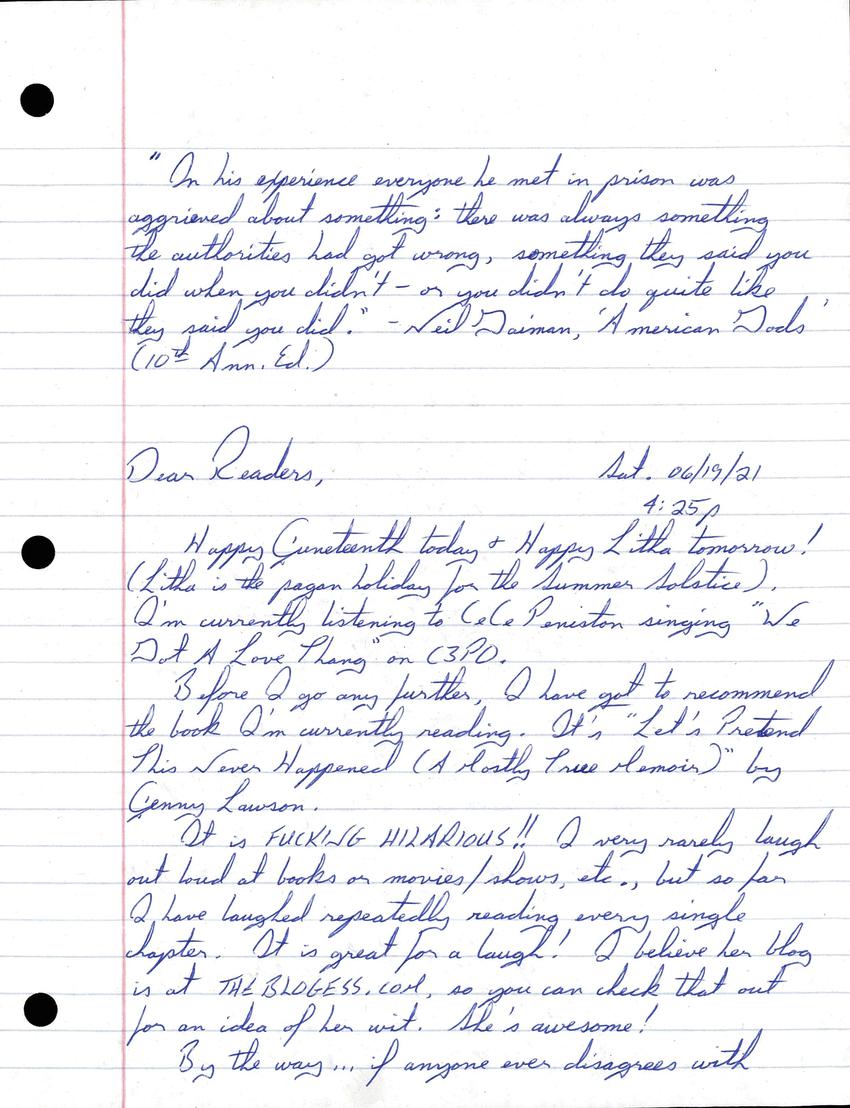 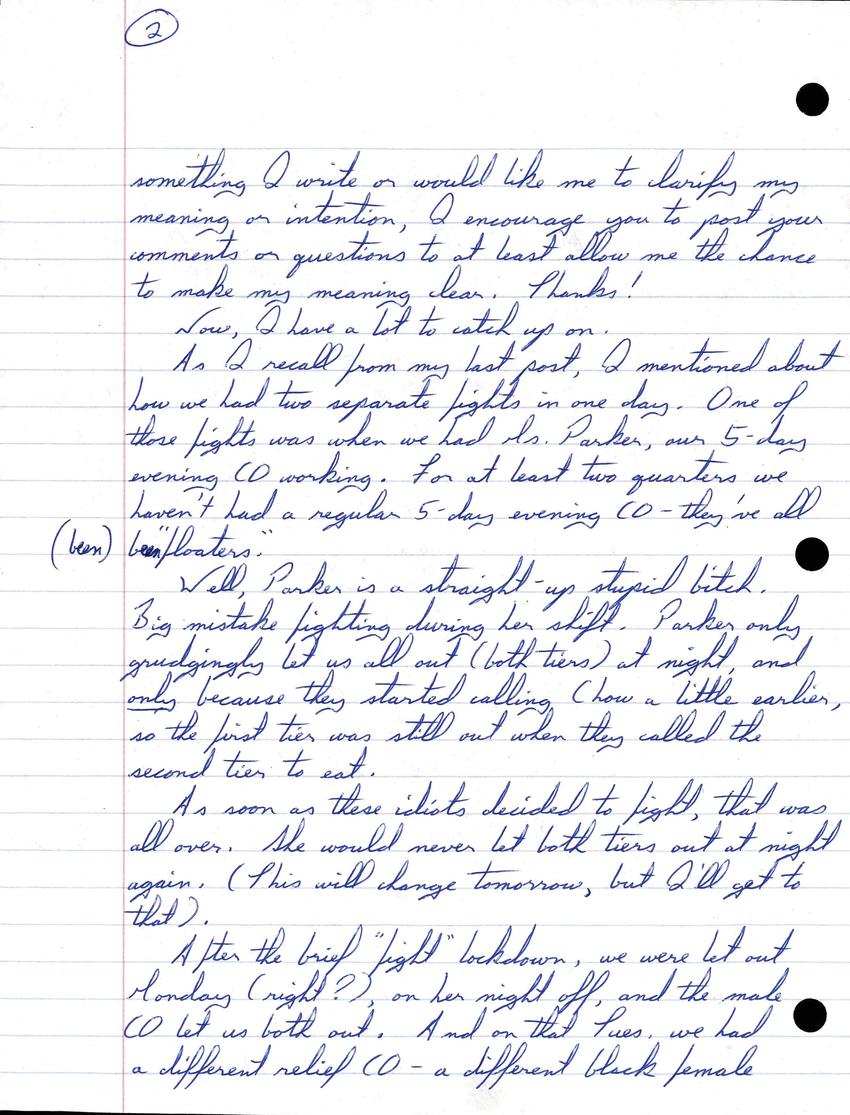 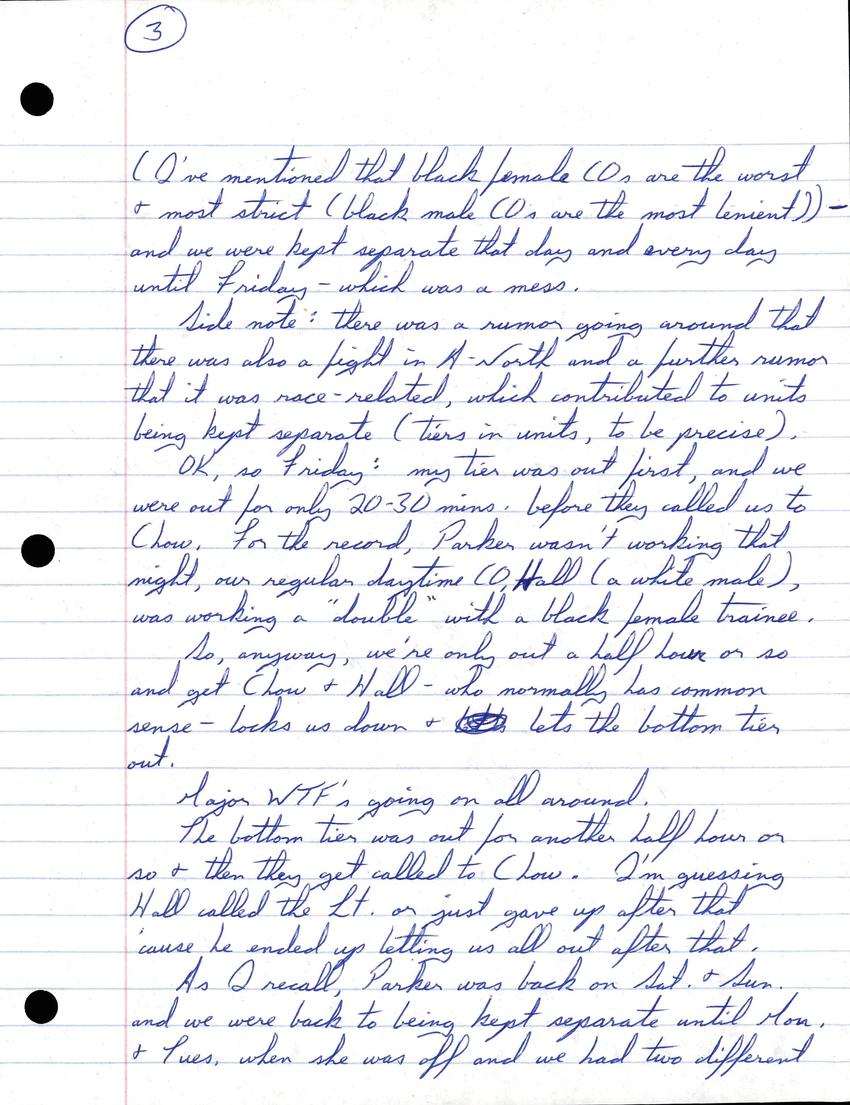 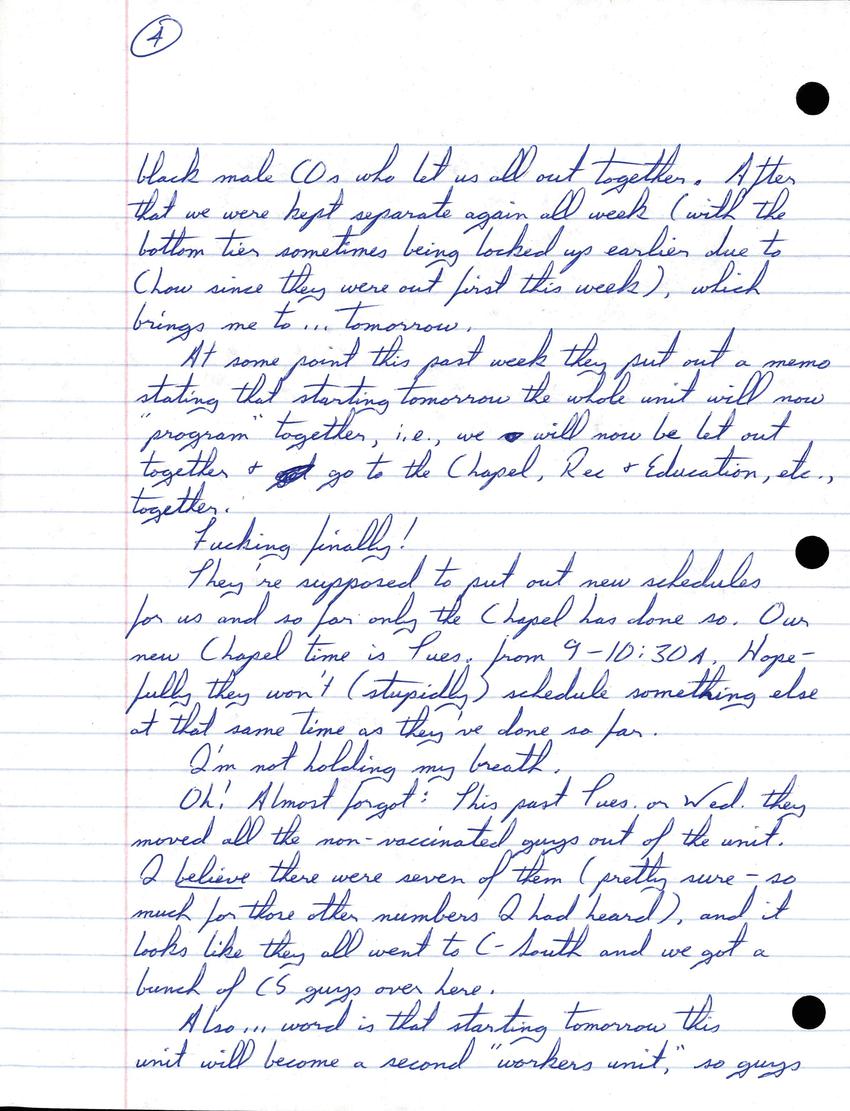 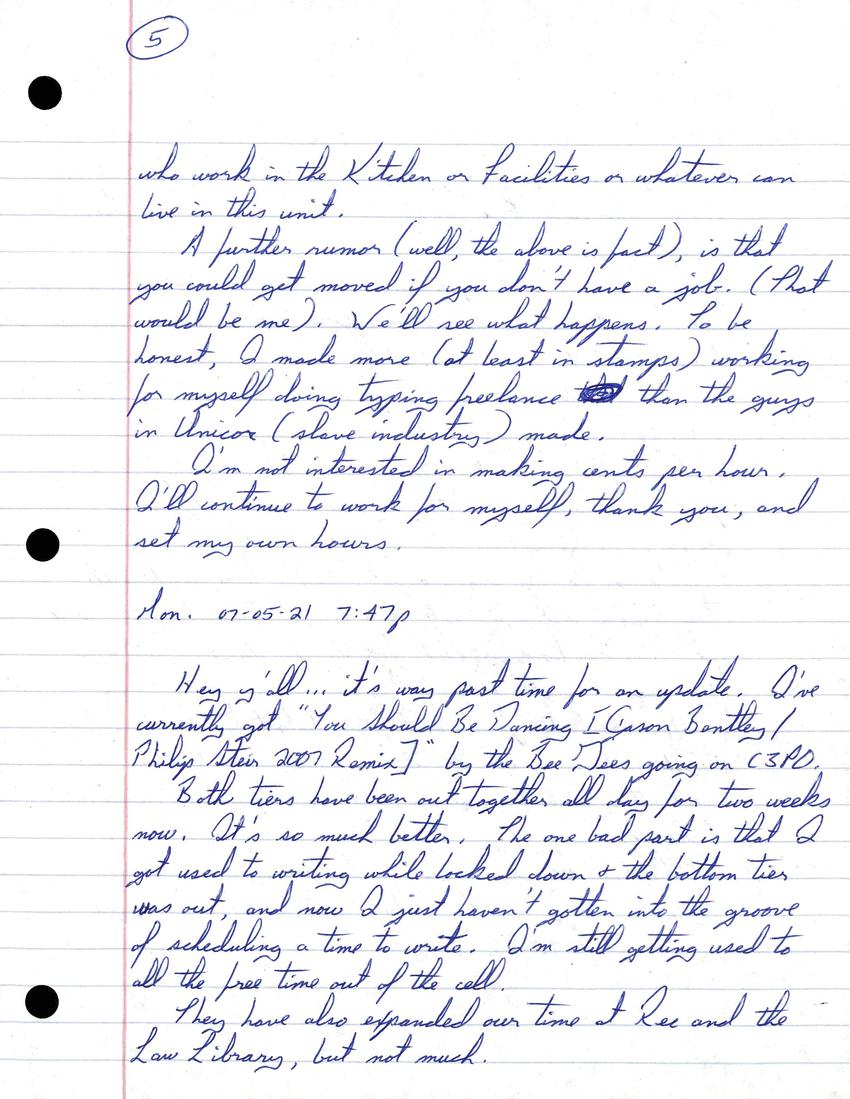 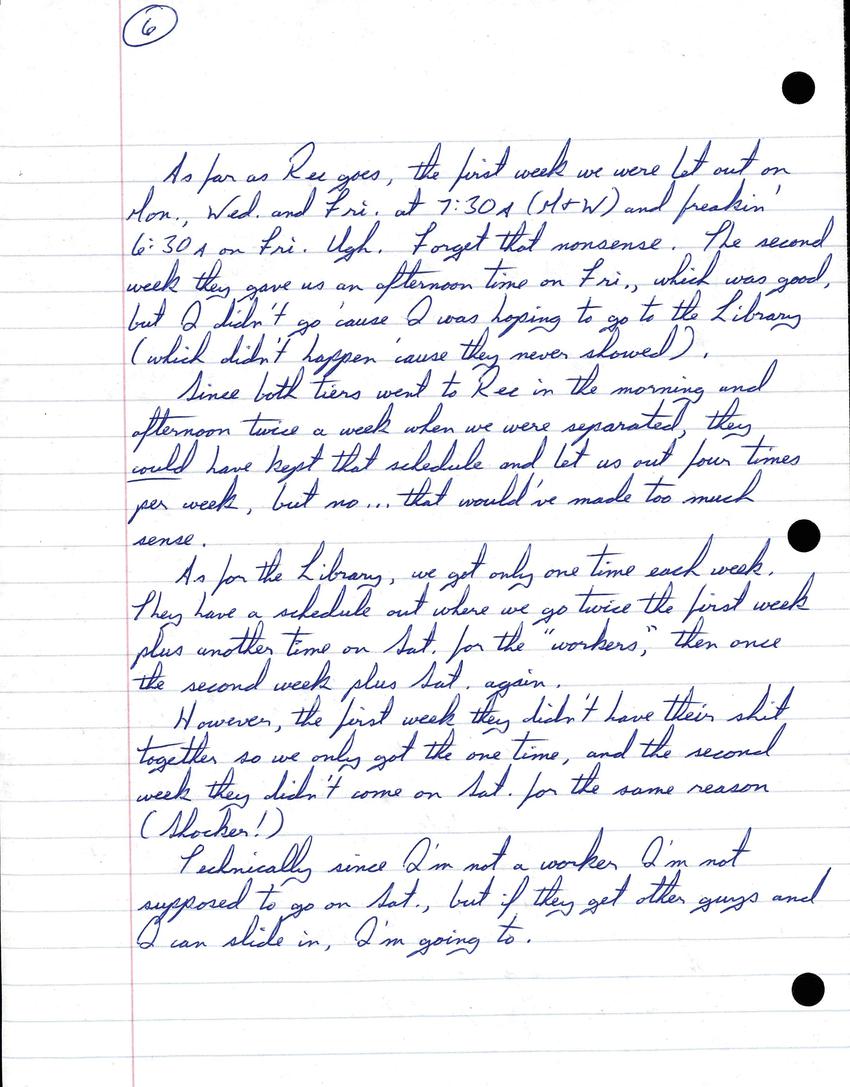 Happy Juneteenth today & Happy Litha tomorrow! (Litha is the pagan holiday for the Summer Solstice). I'm currently listening to CeCe Peniston singing "We Got A Love Thang" on C3P0.
Before I go any further, I have got to recommend the book I'm currently reading. It's "Let's Pretend This Never Happened (A Mostly True Memoir)" by Jenny Lawson.
It is FUCKING HILARIOUS!! I very rarely laugh out loud at books or movies/shows, etc., but so far I have laughed repeatedly reading every single chapter. It is great for a laugh! I believe her blog is at THEBLOGESS.com, so you can check that out for an idea of her wit. She's awesome!
By the way... if anyone ever disagrees with something I write or would like me to clarify my meaning or intention, I encourage you to post your comments or questions to at least allow me the chance to make my meaning clear. Thanks!
Now, I have a lot to catch up on. As I recall from my last post, I mentioned about how we had to separate fights in one day. One of those fights was when we had Ms. Parker, our 5-day evening CO working. For at least two quarters we haven't had a regular 5-da evening CO - they've all been "floaters".
Well, Parker is a straight-up stupid bitch. Big mistake fighting during her shift. Parker only grudgingly let us all out (both tiers) at night, and only because they started calling chow a little earlier, so the first tier was still out when they called the second tier to eat.
As soon as these idiots decided to fight, that was all over. She would never let both tiers out at night again. (This will change tomorrow, but I'll get to that).
After the brief "fight" lockdown, we were let out Monday (right?), on her night off, and the male CO let us both out. And on that Tues. we had a different relief CO - a different black female (I've mentioned that black female COs are the worst & most strict (black male COs are the most lenient) - and we were kept separate that day and every day until Friday - which was a mess.
Side note: there was a rumor going around that there was also a fight in A-North and a further rumor that it was race-related, which contributed to units being kept separate (tiers in units, to be precise).OK, so Friday: my tier was out first, and we were out for only 20-30 mins. before they called us to Chow. For the record, Parker wasn't working that night, our regular daytime CO, Hall (a white male), was working a "double" with a black female trainee.
So, anyway, we're only out a half hour or so and get Chow & Hall - who normally has common sense - locks us down & lets the bottom tier out.
Major WTFs going on all around.
The bottom tier was out for another half hour or so & then they get called to Chow. I'm guessing Hall called the Lt. or just gave up after that 'cause he ended up letting us all out after that.
As I recall, Parker was back on Sat. & Sun. and we were back to being kept separate until Mon. & Tues. when she was off and we had two different black male COs who let us all out together. After that, we were kept separate gain all week (with the bottom tier sometimes being locked up earlier due to Chow since they were out first this week), which brings me to... tomorrow.
At some point this past week they put out a memo stating that starting tomorrow the whole unit will now "program" together, i.e., we will now be let out together & go to the Chapel, Rec & Education, etc., together.
Fucking finally!
They're supposed to put out new schedules for us and so far only the Chapel has done so. Our new Chapel time is Tues. from 9-10:30A. Hopefully they won't (stupidly) schedule something else at that same time as they've done so far.
I'm not holding my breath.
Oh! Almost forgot: this past Tues. or Wed. they moved all the non-vaccinated guys out of the unit. I believe there were seven of them (pretty sure - so much for those other numbers I had heard), and it looks like they all went to C-South and we got a bunch of CS guys over here.
Also... word is that starting tomorrow this unit will become a second "workers unit," so guys who work in the Kitchen or Facilities or whatever can live in this unit.
A further rumor (well, the above is fact), is that you could get moved if you don't have a job. (That would be me). We'll see what happens. To be honest, I made more (at least in stamps) working for myself doing typing freelance than the guys in Unicox (slave industry) made.
I'm not interested in making cents per hour. I'll continue to work for myself, thank you, and set my own hours.