What They Don't See 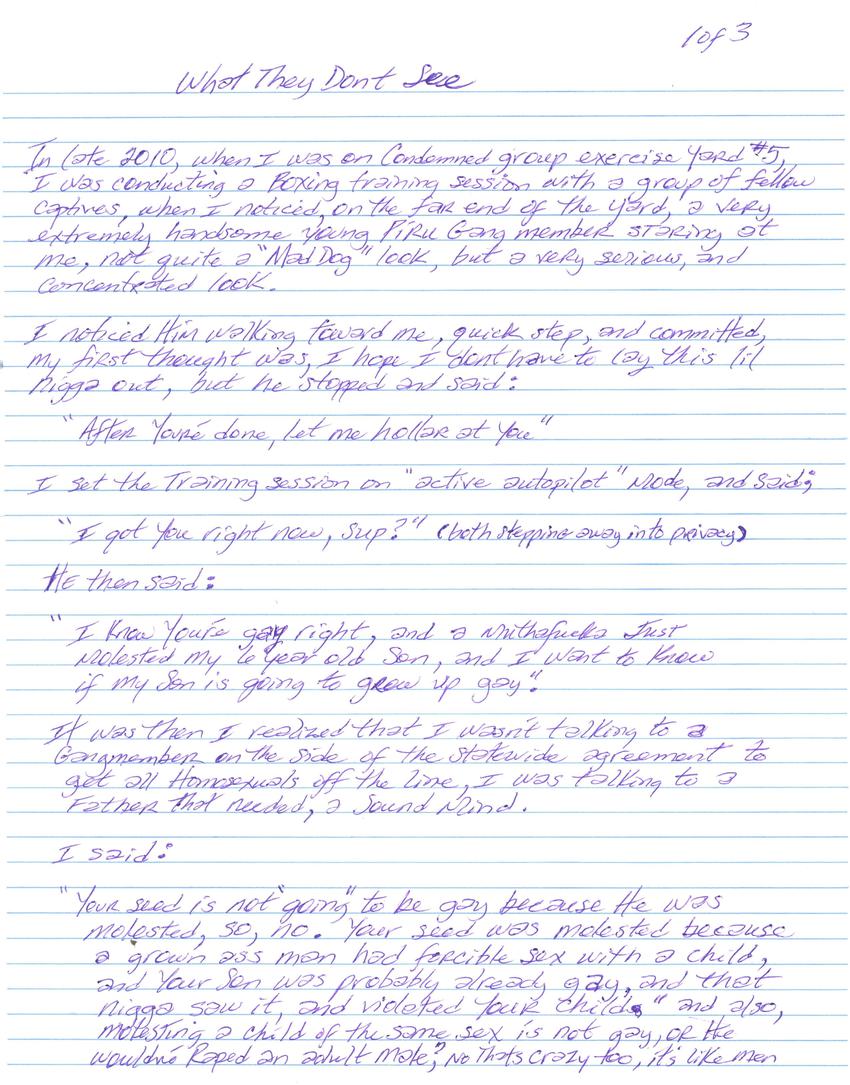 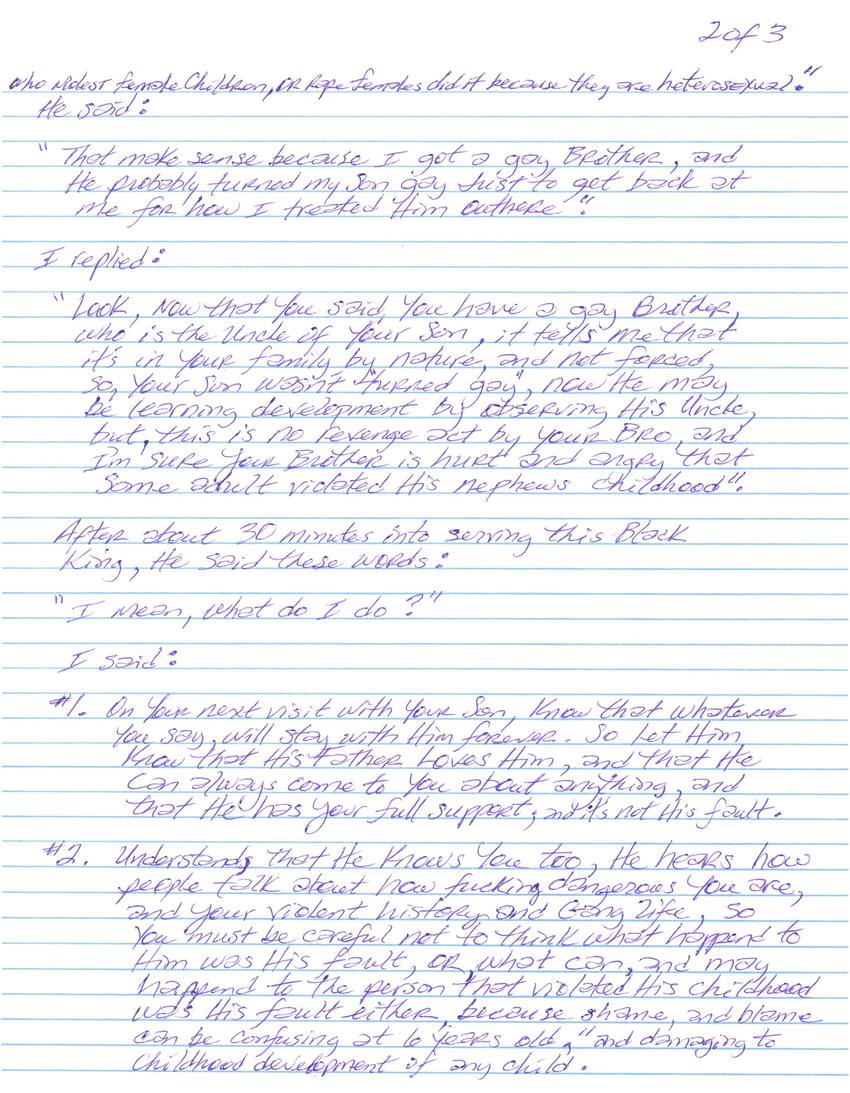 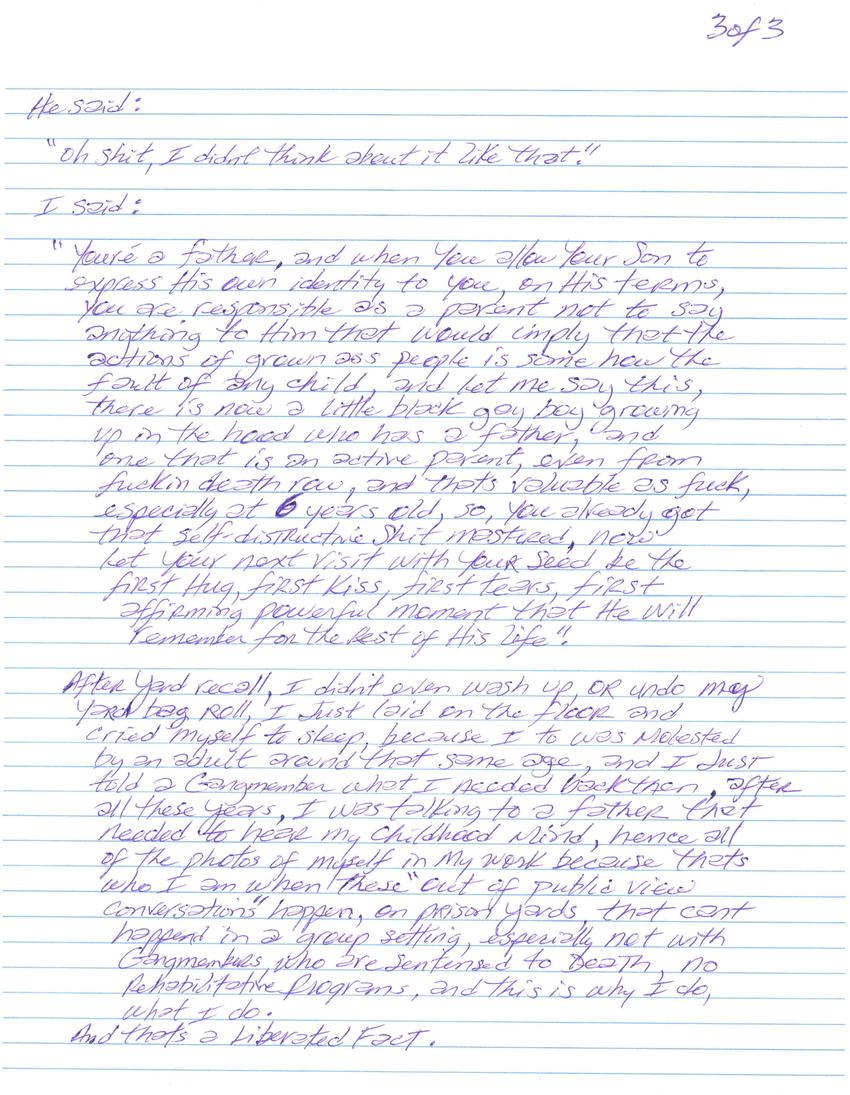 What They Don't See

In late 2010, when I was on Condemned group exercise Yard #5, I was conducting a Boxing training session with a group of fellow captives, when I noticed, on the far end of the yard, a very extremely handsome you Piru Gang member staring at me, not quite a "Mad Dog" look, but a very serious, and concentrated look.

I noticed Him walking toward me, quick step, and committed, my first thought was, I hope I don't have to lay this lil. nigga out, but he stopped and said:

"After You're done, let me holler at you"

I set the Training session on "active autopilot mode, and said;

"I got you right not, sup?" (both stepping away into privacy)

"I know you're gay, right, and a muthafucka just molested my 6 year old son, and I want to know if my son is going to grow up gay".

It was then I realized that I wasn't talking to a Gangmember on the side of the statewide agreement to get all Homosexuals off the line, I was talking to a Father that needed, a sound mind.

"Your seed is not "going" to be gay because He was molested, so, no. Your seed was molested because a grown ass man had forcible sex with a child, and you son was probably already gay, and that nigga saw it, and violated you child. "and also, molesting a child of the same sex is not gay, or he would've raped an adult male; No that's crazy too, it's like men who molest female children, or rape females did it because they are heterosexual."
He said:

"That make sense because I got a gay Brother, and He probably turned my son gay just to get back at me for how I treated Him [?]there".

"Look, now that you said you have a gay Brother, who is the uncle of you son, it tells me that it's in you family by nature, and not forced, so, your son wasn't turned gat", now He may be learning development by observing His Uncle, but, this is no revenge act by your Bro and I'm sure your Brother is hurt and angry that some adult violated Him nephews childhood."

After about 30 minutes into serving this Black King, He said these words:

#1. On your next visit with you Son, know that whatever you say, will stay with Him forever. So let Hum know that His Father Loves Him, and that He can always come to you about anything, and that He has your full support, and it's not His fault.

#2. Understand, That He Knows You too, He hears how people talk about how fucking dangerous you are, and your violent history and Gang Life, so you must be careful not to think what happened to Him was His fault, or what can, and may happen to the person that violated His childhood was His fault either, because shame, and blame can be confusing at 6 years old, "and damaging to childhood development of any child.

"Oh shit, I didn't think about it like that."

"You're a father, and when You allow Your Son to express His own identity to you, on His terms, you are responsible as a parent not to say anything to Him that would imply that the actions of grown ass people is some how the fault of any child, and let me say this, there is now a little black gay boy growing up in the hood who has a father, and one that is an active parent, even from fuckin death row, and thats valuable as fuck, especially at 6 years old, so you already get that self-destructive shit mastered, now let your next visit with your seed be the first Hug, first Kiss, first tears, first affirming powerful. moment that He will remember for the Rest of His Life".

After yard recall, I didn't even wash up or undo my yard bag roll, I just laid on the floor and cried myself to sleep, because I to was Molested by an adult around that same age, and I just told a Gangmember what I needed back then, after all these years, I was talking to a father that needed to hear my childhood mind, hence all of the photos of myself in My Work because that's who I am when these "out of public view conversations" happen, on prison yards, that can't happen in a group setting, especially not with Gangmembers who are sentenced to Death, no Rehabilitative Programs, and This is why I do, what I do

And thats a Liberated Fact.

This is a great piece, beautifully written.
This piece is very touching and profound, nicely written. I am glad I stop to read it very unexpected.