Prisoner's suit about WI supermax staff setting up assaults, resulting in him being stabbed in his head 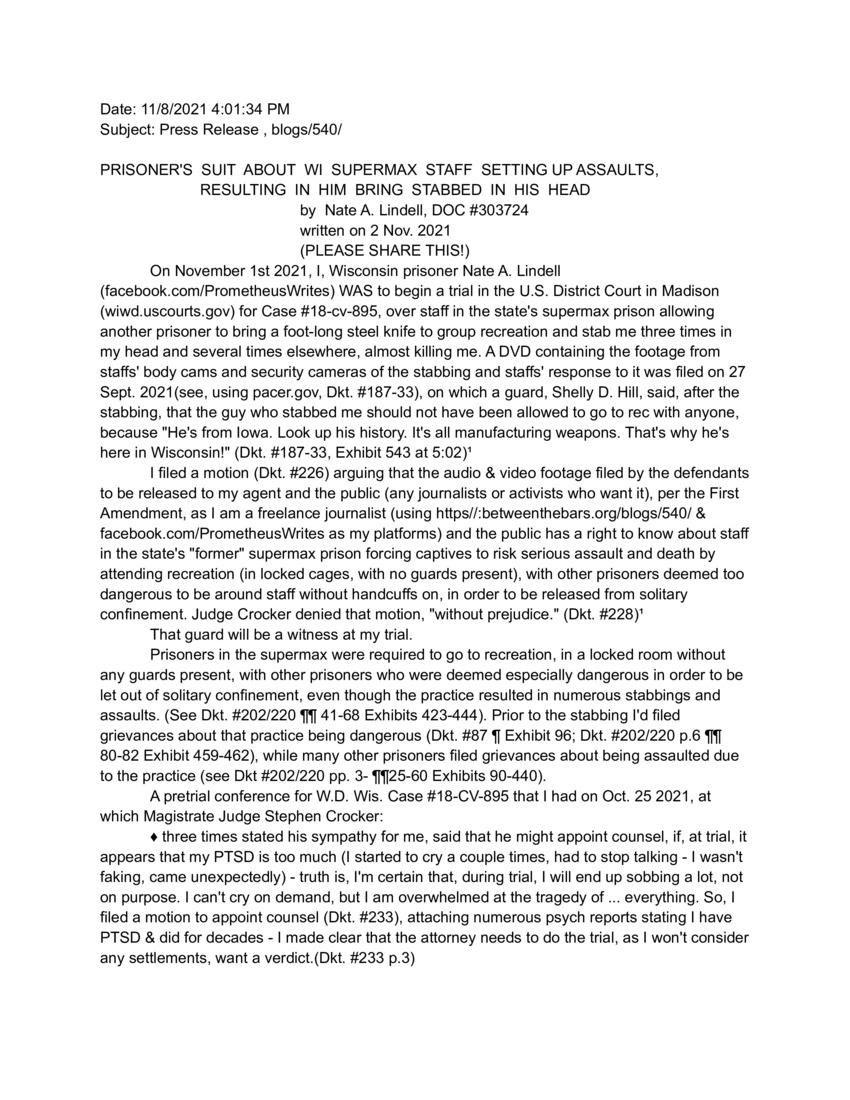 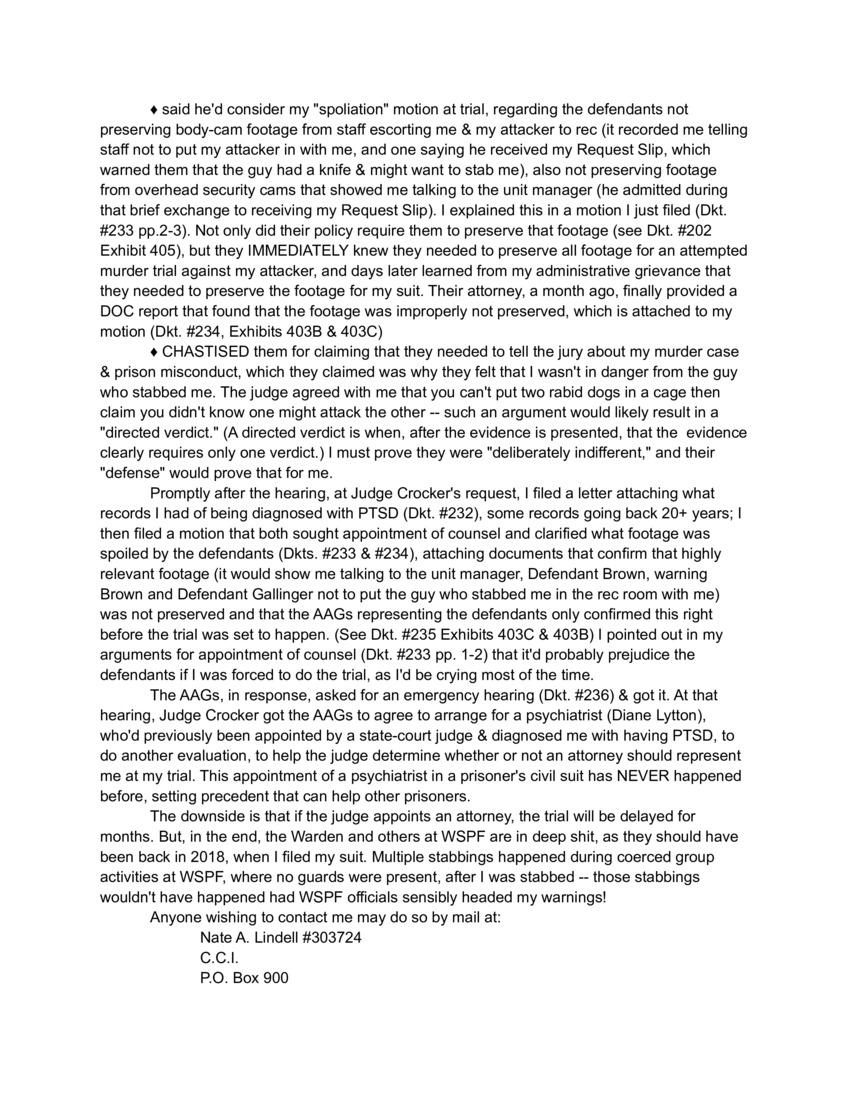 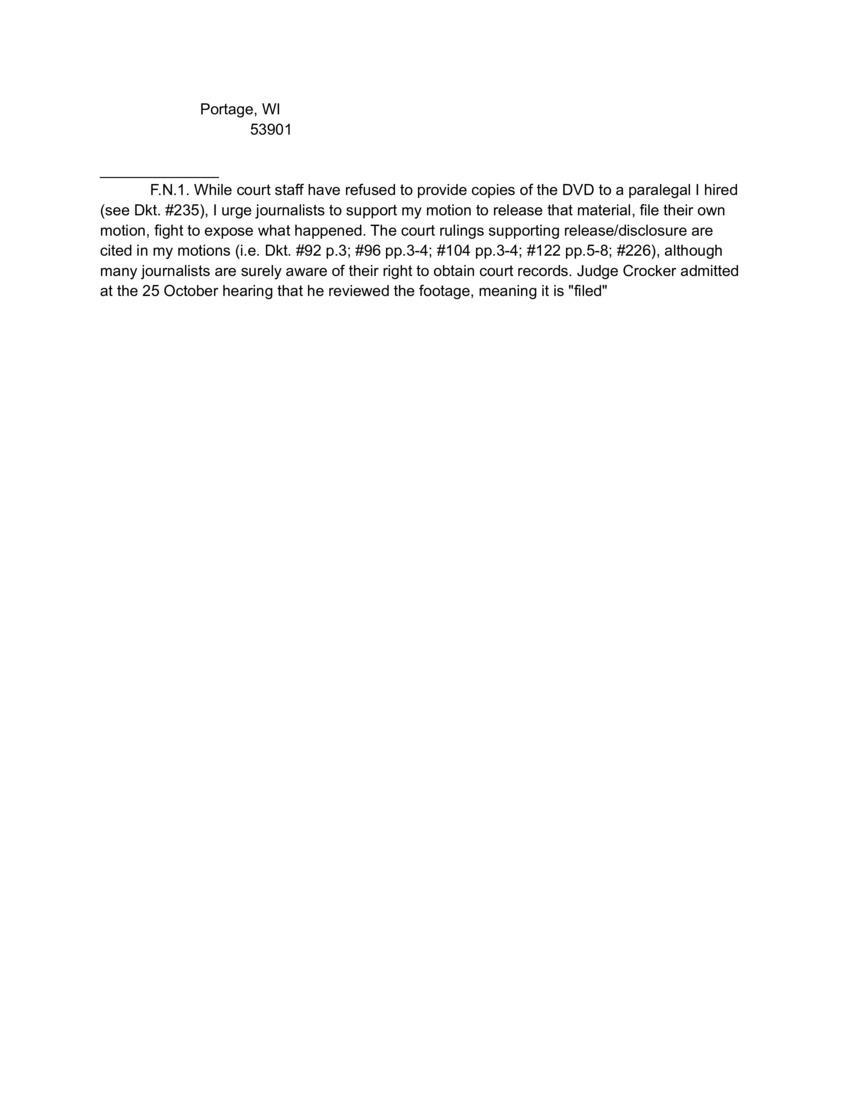 PRISONER'S SUIT ABOUT WI SUPERMAX STAFF SETTING UP ASSAULTS, RESULTING IN HIM BEIN STABBED IN HIS HEAD
by Nate A. Lindell, DOC #303724
written on 2. Nov. 2021
(PLEASE SHARE THIS!)

On November 1st 2021, I, Wisconsin prisoner Nate A. Lindell (facebook.com/PrometheusWrites) WAS to begin a trial in the U.S. District Court in Madison (wiwd.uscourts.gov) for Case #18-cv-895, over staff in the state's supermax prison allowing another prisoner to bring a foot-long steel knife to group recreation and stab me three times in my head and several times elsewhere, almost killing me. A DVD containing the footage from staffs' body cams and security cameras of the stabbing and staffs' response to it was filed on 27 Sept. 2021 (see, using pacer.gov, Dkt. #187-33), on which a guard, Shelly D. Hill, said, after the stabbing, that the guy who stabbed me should not have been allowed to go to rec with anyone, because "He's from Iowa. Look up his history. It's all manufacturing weapons. That's why he's here in Wisconsin!" (Dkt. #187-33, Exhibit 543 at 502)1

I filed a motion (Dkt. #226) arguing that the audio & video footage filed by the defendants to be released to my agent and the public (any journalists or activists who want it), per the First Amendment, as I am a freelance journalist (using https://betweenthebars.org/blogs/540/ & facebook.com/PrometheusWrites as my platforms) and the public has a right to know about staff in the state's "former" supermax prison forcing captives to risk serious assault and death by attending recreation (in locked cages, with no guards present), with other prisoners deemed too dangerous to be around staff without handcuffs on, in order to be released from solitary confinement. Judge Crocker denied that motion, "without prejudice." (Dkt #228)1

That guard will be a witness at my trial.

Prisoners in the supermax were required to go to recreation, in a locked room without any guards present, with other prisoners who were deemed especially dangerous in order to be let out of solitary confinement, even though the practice resulted in numerous stabbings and assaults. (See Dkt. #202/220 PP 41-68 Exhibits 423-444). Prior to the stabbing I'd filed grievances about that practice being dangerous (Dkt. #87 P Exhibit 96; Dkt. #202/220 P 6 PP 80-82 Exhibit 459-462), while many other prisoners filed grievances about being assaulted due to the practice (see Dkt. #202/220 pp 3 PP 25-60 Exhibits 90-440).

♦️three times stated his sympathy for me, said that he might appoint counsel, if, at trial, it appears that my PTSD is too much (I started to cry a couple times, had to stop talking - I wasn't faking, came unexpectedly) - truth is, I'm certain that, during trial, I will end up sobbing a lot, not on purpose. I can't cry on demand, but I am overwhelmed at the tragedy of ... everything. So, I filed a motion to appoint counsel (Dkt. #233), attaching numerous psych reports stating I have PTSD & did for decades - I made clear that the attorney needs to do the trial, as I won't consider any settlements, want a verdict. (Dkt. #233 p.3)

♦️said he'd consider my "spoliation" motion at trial, regarding the defendants not preserving body-cam footage from staff escorting me & my attacker to rec (it recorded me telling staff not to put my attacker in with me, and one saying he received my Request Slip, which warned them that the guy had a knife & might want to stab me), also not preserving footage from overhead security cams that showed me talking talking to the unit manager (he admitted during that brief exchange to receiving my Request Slip). I explained this in a motion I just filed (Dkt. #233 pp.2-3). Not only did their policy require them to preserve that footage (see Dkt. #202 Exhibit 405), but they IMMEDIATELY knew they needed to preserve all footage for an attempted murder trial against my attacker, and days later learned from my administrative grievance that they needed to preserve the footage for my suit. Their attorney, a month ago, finally provided a DOC report that found that the footage was improperly not preserved, which is attached to my motion (Dkt. #234, Exhibits 403B & 403C)

♦️CHASTISED them for claiming that they needed to tell the jury about my murder case & prison misconduct, which they claimed was why they felt that I wasn't in danger from the guy who stabbed me. The judge agreed with me that you can't put two rabid dogs in a cage then claim you didn't know one might attack the other -- such an argument would likely result in a "directed verdict." (A directed verdict is when, after the evidence is presented, that the evidence clearly requires only one verdict.) I must prove they were "deliberately indifferent," and their "defense" would prove that for me.

Promptly after the hearing, at Judge Crocker's request, I filed a letter attaching what records I had of being diagnosed with PTSD (Dkt. #232), some records going back 20+ years; I then filed a motion that both sought appointment of counsel and clarified what footage was spolied by the defendants (Dkts. #233 & #234), attaching documents that confirm that highly relevant footage (it would show me talking to the unit manager, Defendant Brown, warning Brown and Defendant Gallinger not to put the guy who stabbed me in the rec room with me) was not preserved and that the AAGs representing the defendants only confirmed this right before the trial was set to happen. (See Dkt. #235 Exhibits 403C & 403B) I pointed out in my arguments for appointment of counsel (Dkt. #233 pp. 1-2) that it'd probably prejudice the defendants if I was forced to do the trial, as I'd be crying most of the time.

The AAGs, in response, asked for an emergency hearing (Dkt. #236) & got it. At that hearing, Judge Crocker got the AAGs to agree to arrange for a psychiatrist (Diane Lytton), who'd previously been appointed by a state-court judge & diagnosed me with having PTSD, to do another evaluation, to help the judge determine whether or not an attorney should represent me at my trial. This appointment of a psychiatrist in a prisoner's civil suit has NEVER happened before, setting precedent that can help other prisoners.

The downside is that if the judge appoints an attorney, the trial will be delayed for months. But, in the end, the Warden and others at WSPF are in deep shit, as they should have been back in 2018, when I filed my suit. Multiple stabbings happened during coerced group activities at WSPF, where no guards were present, after I was stabbed -- those stabbings wouldn't have happened had WSPF officials sensibly headed my warnings!

Anyone wishing to contact me may do so by mail at:

_______
F.N.1. While court staff have refused to provide copies of the DVD to a paralegal I hired (See Dkt. #235), I urge journalists to support my motion to release that material, file their own motion, fight to expose what happened. The Court rulings supporting release/disclosure are cited in my motions (i.e. Dkt. #92 p.3; #96 pp.3-4; #122 pp.5-8; #226), although many journalists are surely aware of their right to obtain court records. Judge Crocker admitted at the 25 October hearing that he reviewed the footage, meaning it is "filed"

This is a great piece, I learned so much!