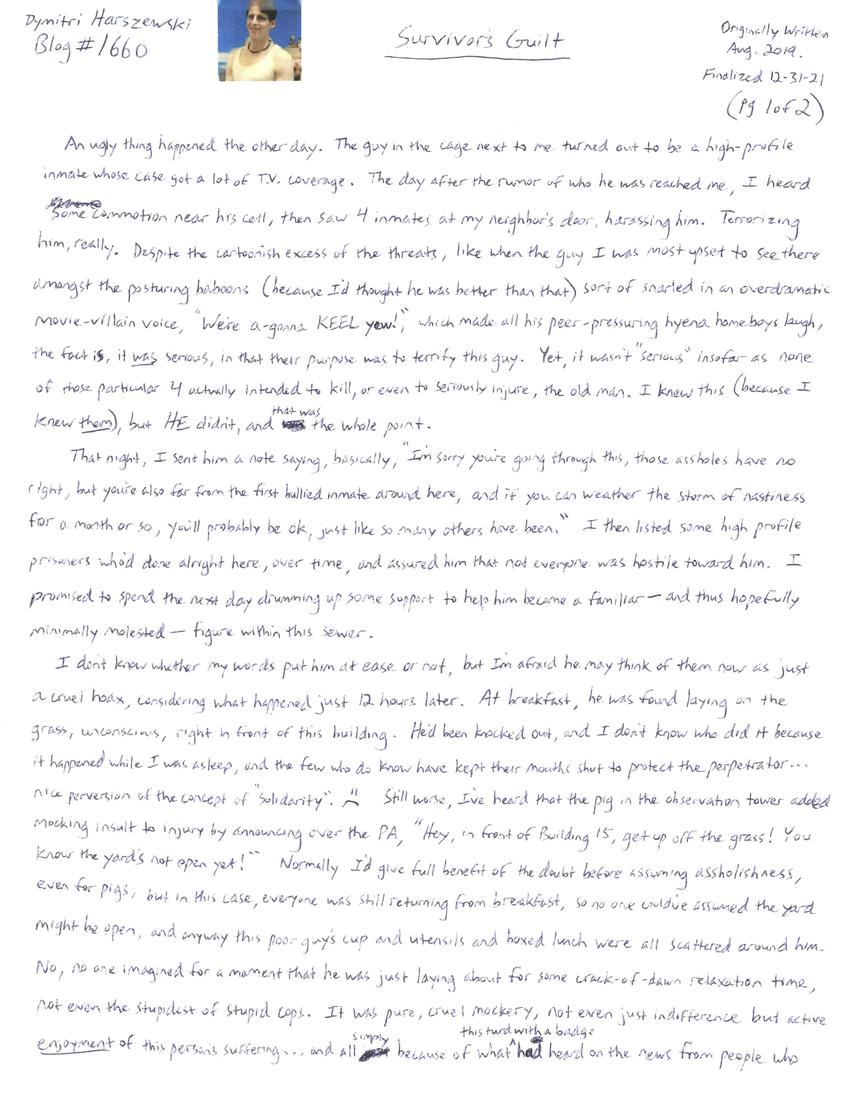 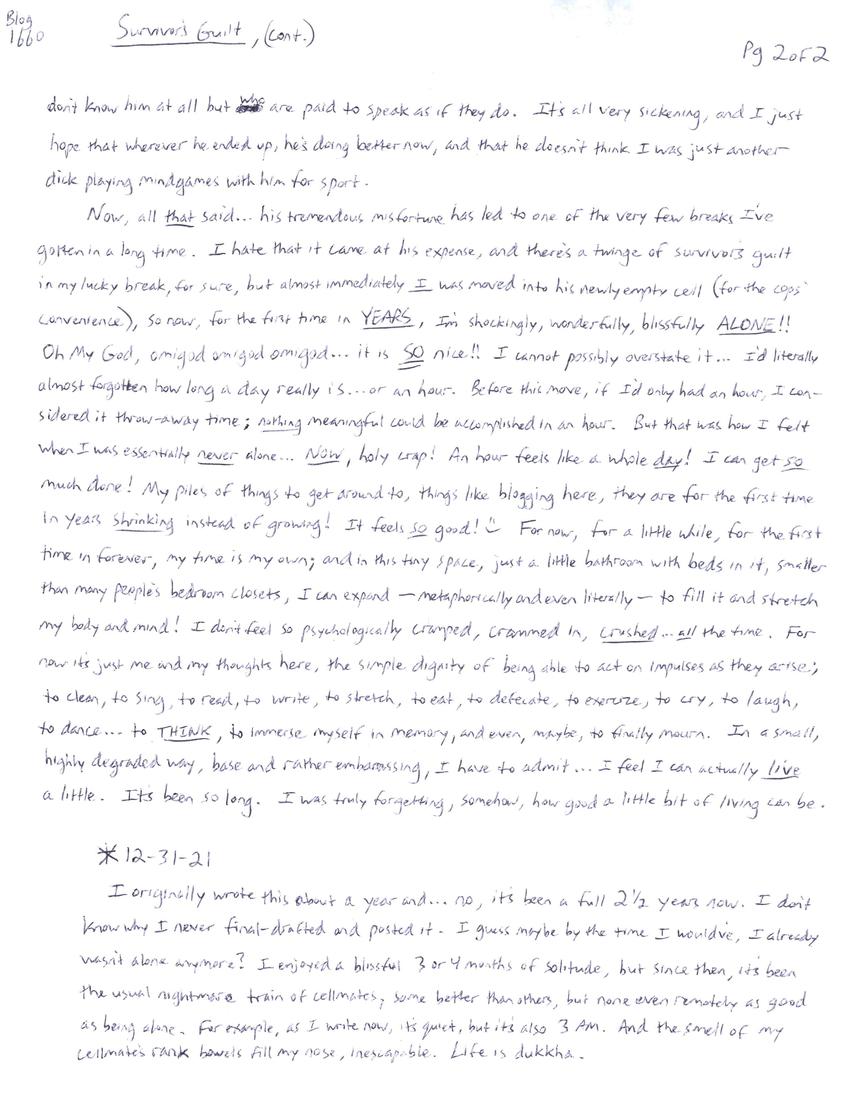 An ugly thing happened the other day. The guy in the cage next to me turned out to be a high-profile inmate whose case got a lot of T.V. coverage. The day after the rumor of who he was reached me, I heard some commotion near his cell, then saw 4 inmates at my neighbor's door, harassing him. Terrorizing him, really. Despite the cartoonish excess of the threats, like when the guy I was most upset to see there amongst the posturing baboons (because I'd thought he was better than that) sort of snarled in an overdramatic movie-villain voice, "We're a-gonna KEEL yew!", which made all his peer-pressuring hyena homeboys laugh, the fact is, it was serious, in that their purpose was to terrify this guy. Yet, it wasn't "serious" insofar as none of those particular 4 actually intended to kill, or even to seriously injure, the old man. I knew this (because I
knew them), but HE didn't, and that was the whole point.

That night, I sent him a note saying, basically, "I'm sorry you're going through this, those assholes have no right, but you're also far from the first bullied inmate around here, and if you can weather the storm of nastiness for a month or so, you'll probably be ok, just like so many others have been." I then listed some high-profile prisoners who'd done alright here, over time, and assured him that not everyone was hostile toward him. I promised to spend the next day drumming up some support to help him become a familiar -- and thus hopefully minimally molested -- figure within this sewer.

I don't know whether my words put him at ease or not, but I'm afraid he may think of them now as just a cruel hoax, considering what happened just 12 years hours later. At breakfast, he was found laying on the grass, unconscious, right in front of this building. He'd been knocked out, and I don't know who did it because it happened while I was asleep, and the few who do know have kept their mouths shut to protect the perpetrator... nice perversion of the concept of "solidarity" :( Still worse, I've heard that the pig in the observation tower added mocking insult to injury by announcing over the PA, "Hey, in front of Building 15, get up off the grass! You know the yard's not open yet!" Normally I'd give full benefit of the doubt before assuming assholishness, even for pigs, but in this case, everyone was still returning from breakfast, so no one could've assumed the yard might be open, and anyway this poor guy's cup and utensils and boxed lunch were all scattered around him. No, no one imagined for a moment that he was just laying about for some crack-of-dawn relaxation time, not even the stupidest of stupid cops. It was pure, cruel mockery, not even just indifference but active enjoyment of this person's suffering... and all simply because of what this turd with a badge heard on the news from people who

don't know him at all but who are paid to speak as if they do. It's all very sickening, and I just hope that wherever he ended up, he's doing better now, and that he doesn't think I was just another dick playing mindgames with him for sport.

Now, all that said... his tremendous misfortune has led to one of the very few breaks I've gotten in a long time. I hate that it came at his expense, and there's a twinge of survivor's guilt in my lucky break, for sure, but almost immediately I was moved into his newly empty cell (for the cops' convenience), so now, for the first time in YEARS, I'm shockingly, wonderfully, blissfully ALONE!! Oh My God, omigod omigod omigod ... it is SO nice!! I cannot possibly overstate it... I'd literally almost forgotten how long a day really is... or an hour. Before this move, if I'd only had an hour, I considered it throw-away time; nothing meaningful could be accomplished in an hour. But that was how I felt when I was essentially never alone... NOW, holy crap! An hour feels like a whole day! I can get so much done! My piles of things to to get around to, things like blogging here, they are for the first time in years shrinking instead of growing! It feels SO good :) For now, for a little while, for the first time in forever, my time is my own/ and in this tiny space, just a little bathroom with beds in it, smaller than many people'e bedroom closets, I can expand -- metaphorically and even literally -- to fill it and stretch my body and mind! I don't feel so psychologically cramped, crammed in, crushed... all the time. For now it's just me and my thoughts here, and the simple dignity of being able to act on impulses as they arise; to clean, to sing, to read, to write, to stretch, to eat, to defecate, to exercise, to cry, to laugh, to dance... to THINK, to immerse myself in memory, and even , maybe, to finally mourn. In a small, highly degraded way, base and rather embarassing, I have to admit... I feel I can actually live a little. Its been so long. I was truly forgetting, somehow, how good a little bit of living can be.

* 12-31-21
I originally wrote this about a year and ... no, it's been a full 2 1/2 years now. I don't know why I never final-drafted and posted it. I guess maybe by the time I would've, I already wasn't alone anymore? I enjoyed a blissful 3 or 4 months of solitude, but since then, it's been the usual nightmare train of cellmates, some better than others, but none even remotely as good as being alone. For example, as I write now, it's quiet, but it's also 3 PM. And the smell of my cellmate's rank bowels fill my nose, inescapable. Life is dukkha.

Interesting perspective! Sad for sure. Is the high profile guy still there or did he move?