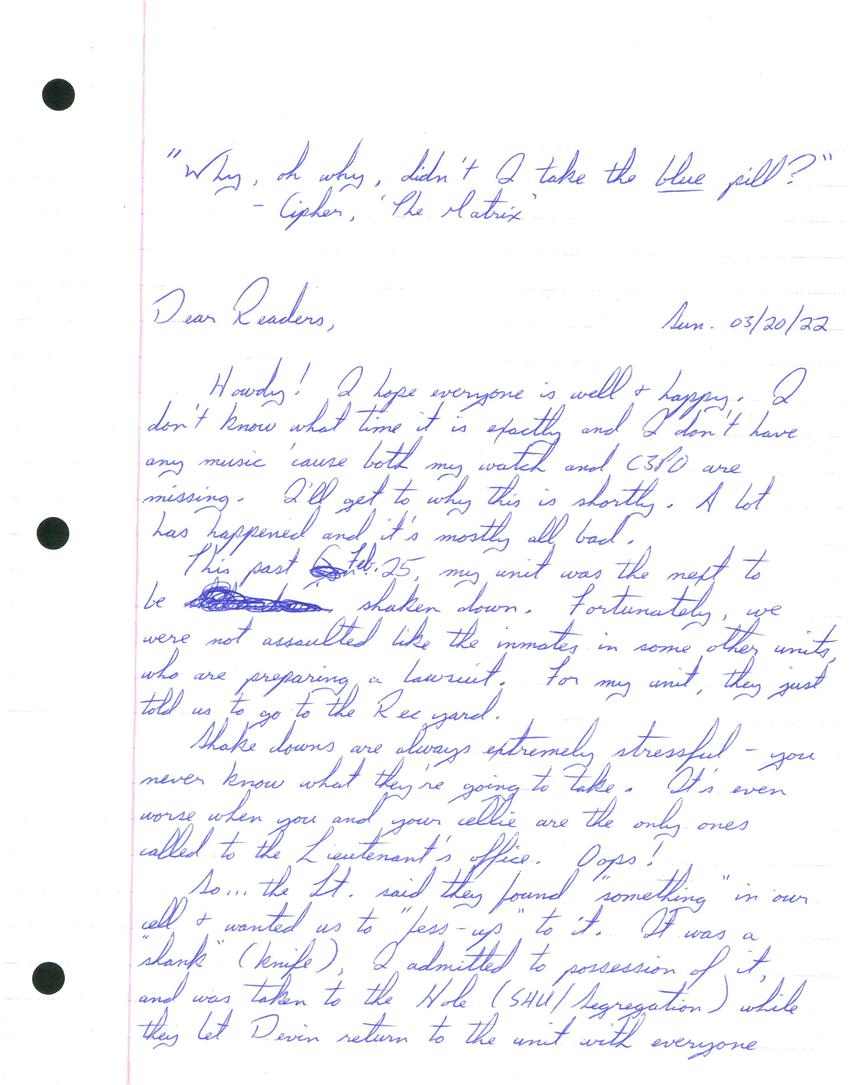 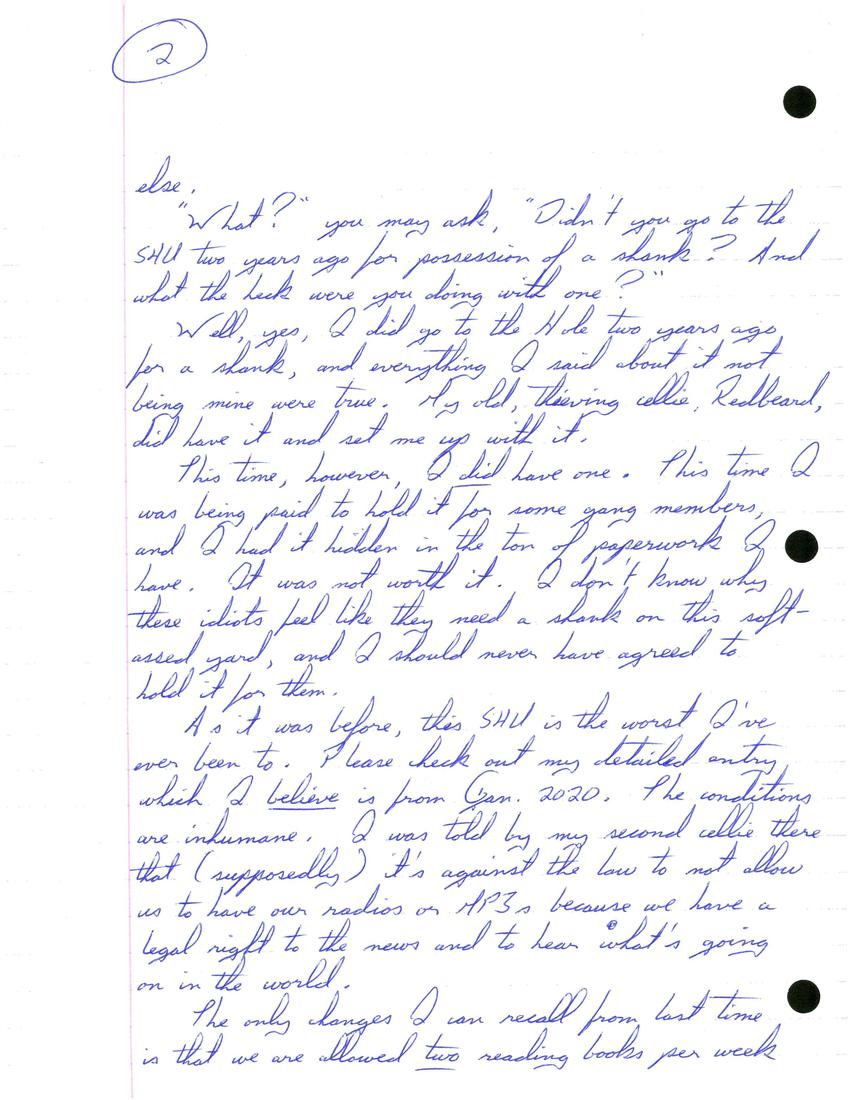 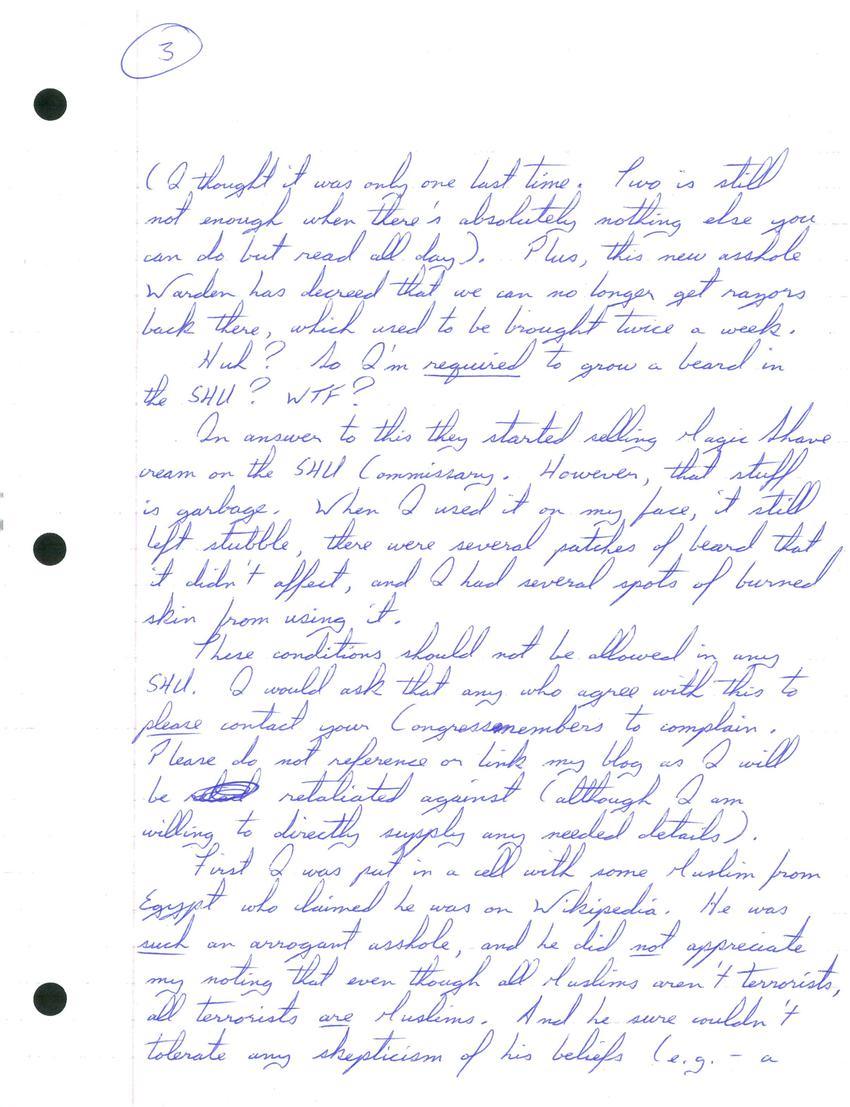 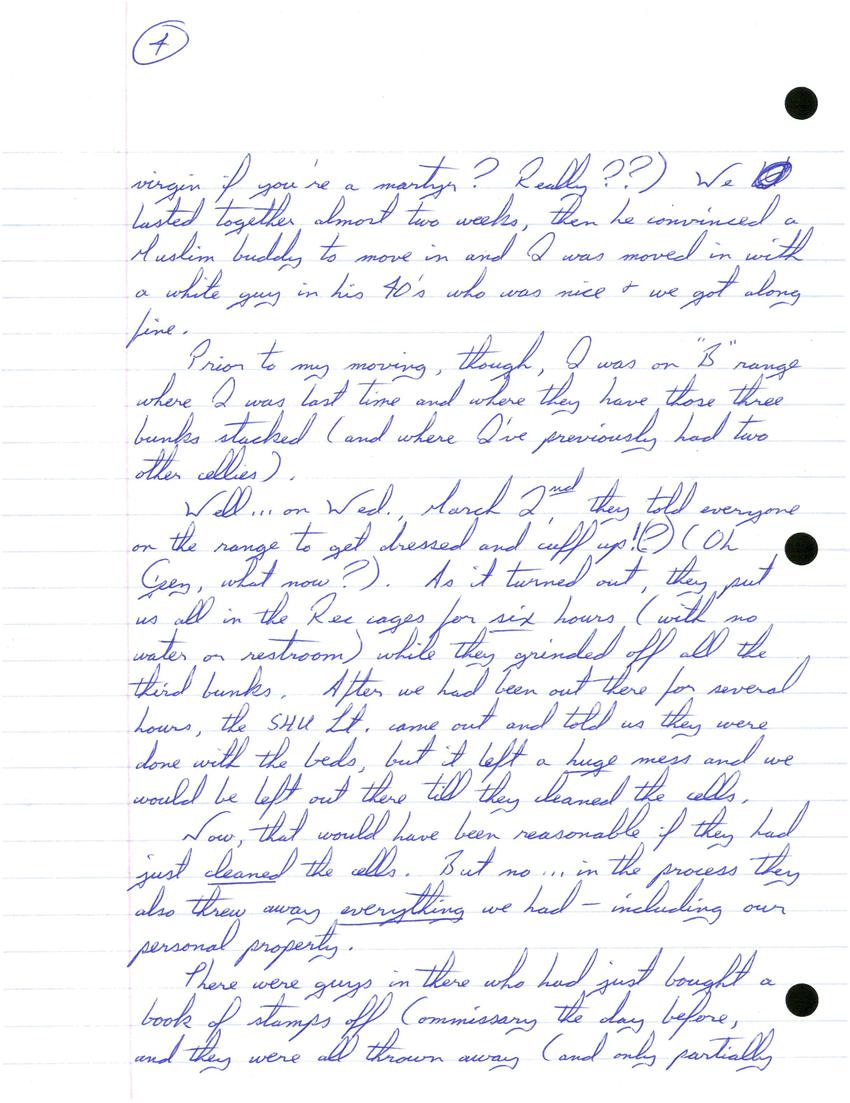 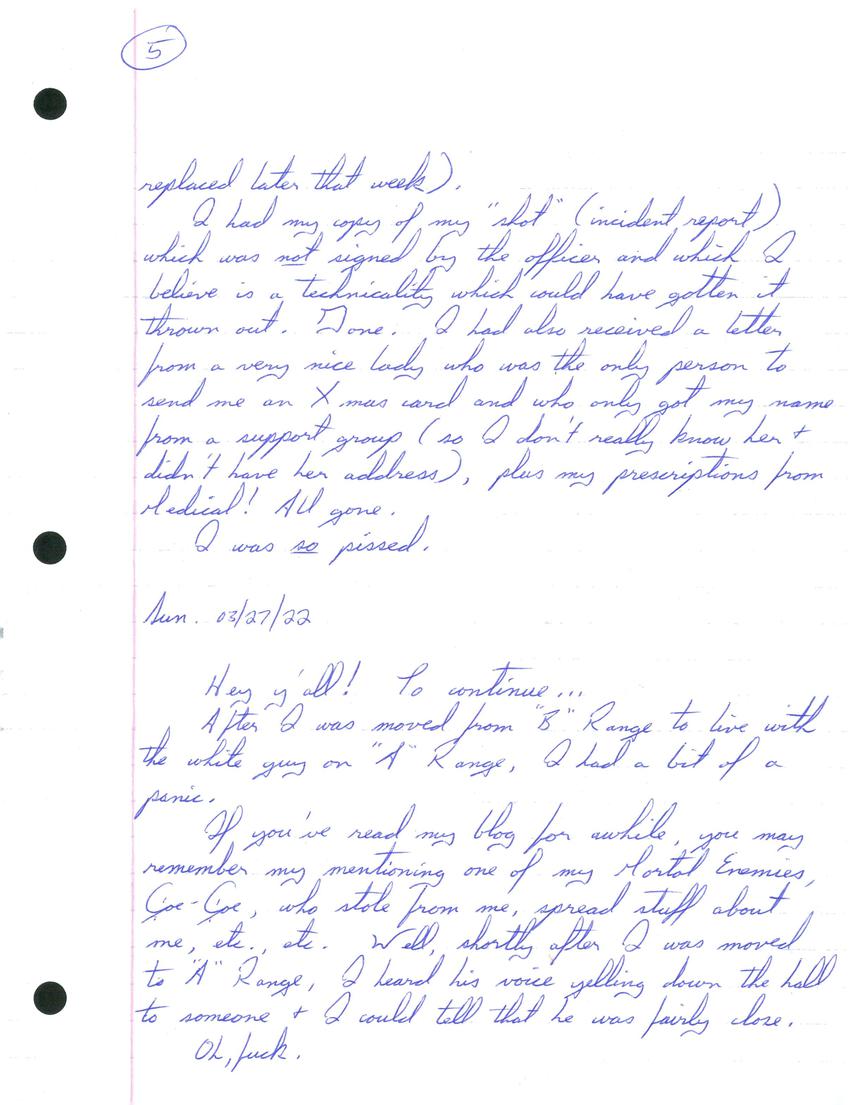 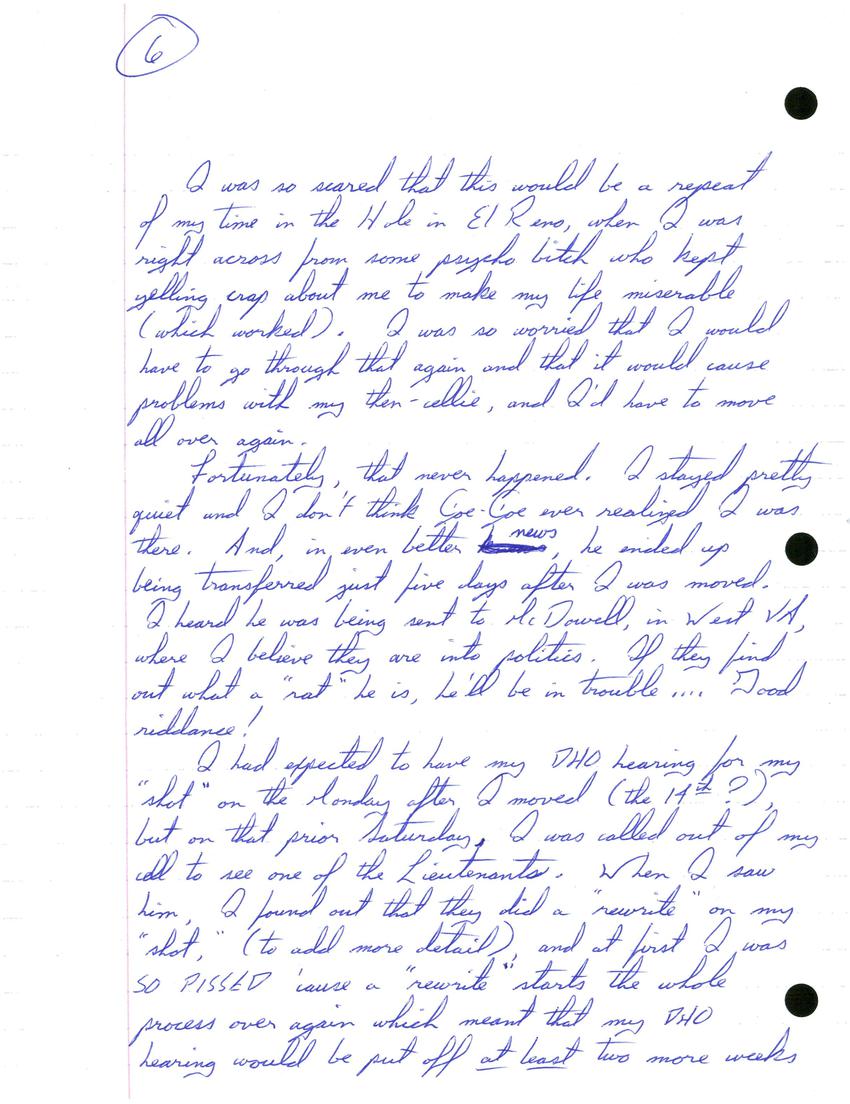 Howdy! I hope everyone is well & happy. I don't know what time it is exactly and I don't have any music 'cause both my watch and C3P0 are missing. I'll get to why this is shortly. A lot has happened and it's mostly all bad.

This past Feb. 25, my unit was the next to be shaken down. Fortunately we were not assaulted like the inmates in some other units who are preparing a lawsuit. For my unit, they just told us to go to the Rec yard.

Shake downs are always extremely stressful- you never know what they're going to take. It's even worse when you and your cellie are the only ones called to the Lieutenants office. Oops!

So... They Lt. said they found something in our cell and wanted us to "fess-up" to it. It was a "shank" (knife), I admitted to possession of it, and as taken to the Hole (SHU/Segregation) while they let Devin return to the unit with everyone else.

"What?" you may ask, "Didn't you go to the SHU two years ago for possession of a shank? And what the heck were you doing with one?"

Well, yes, I did go to the Hole two years ago for a shank, and everything I said about it not being mine were true. My old, thieving cellie, Redbeard, did have it and set me up with it.

This time, however, I did have one. This time I was being paid to hold it for some gang members, and I had it hidden in the ton of paperwork I have. It was not worth it. I don't know why these idiots feel like they need a shank on this soft-asses yard, and I should never have agreed to hold it for them.

As it was before, this Shu is the worst I've ever been to. Please check out my detailed entry which I believe is from Jan. 2020. The conditions are inhumane. I was told by my second cellie there that (supposedly) it's against the law to not allow us to have our radios or MP3s because we have a legal right to the news and to hear what's going on in the world.

The only changes I can recall from last time is that we are allowed two reading books per week(I thought it was only one last time. Two is still not enough when there's absolutely nothing else you can do but read all day). Plus, this new asshole Warden has decreed that we can no longer get razors back there, which used to be brought twice a week.

Huh? So I'm required to grow a beard in the SHU? WTF?

In answer to this they started selling Magic Shave cream on the SHU commissary. However, that stuff is garbage. When I used it on my face, it still left stubble, there were several sports of burned skin from using it.

These conditions should not be allowed in any SHU. I would ask that any who agree with this to please contact your Congress member to complain. Please do not reference or link my blog as I will be retaliated against (although I am willing to directly supply any needed details).

First I was out in a cell with some Muslim from Egypt who claimed he was on Wikipedia. He was such an arrogant asshole, and he did not appreciate my noting that even though all Muslims aren't terrorists, all terrorist are Muslim. And he sure wouldn't tolerate any skepticism of his beliefs. (e.g. - a virgin if you're a martyr? Really??) We lasted together almost two weeks, then he convinced a Muslim buddy to move in and I was moved in with a white guy in his 40s who was nice & we got along fine.

Prior to my moving, though, I was on a "B" range where I was last time and where they have those three bunks stacked (and where I've previously had two other cellies).

Well... on Wed, March 2nd, they told everyone on the range to get dressed and cuff up! (?) (Oh Geez, what now?) As it turned out, they put us all in the Rec cages for six hours (with no water or restroom) while they grinded off all the third bunks. After we had been out there for several hours, the SHU Lt. came out and told us they were done with the beds, but it left a huge mess and we would be left out there till they cleaned the cells.

Now, that would would have been reasonable if they had just cleaned the cells. But no... in the process they also threw away everything we had including our personal property.

There were guys in there who had just bought a book of stamps off Commissary the day before, and they were all thrown away (and only partially replaced later that week).

I had my copy of my "shot" (incident report) which was not signed by the officer and which I believe is a technicality which would have gotten it thrown out. Done. I had also received a letter from a very nice lady who was the only person to send me an X mas card and who only got my name from a support group (so I don't really know her & don't have her address), plus my prescriptions from Medical! All gone.

I was so pissed.

Hey y'all! To continue..

After I was moved from "B" Range to live with the white guy on "A" Range, I had a bit of panic.

If you've read my blog for a while, you may remember my mentioning one of my Mortal Enemies, Joe-Joe, who stole from me, spread stuff about me, etc., etc. Well, shortly after I was moved to "A" Range, I heard his voice yelling down the hall to someone and & I could tell that he was fairly close.

Fortunately, that never happened. I stayed pretty quiet and I don't think Joe-Joe ever realized I was there. And in even better, he ended up being transferred just five days after I was moved. I heard he was being sent to McDowell in West VA, where I believe they are into politics. If they find out what a "rat" he is, he'll be in trouble... Good Riddance!

I had expected to have my DHO hearing for my "shot" on the Monday after I moved (the 14th?) but on that prior Saturday, I was called out of my cell to see one of the Lieutenants. When I saw him, I found out that they did a "rewrite" on my "shot" (to add more detail) and at first I was SO PISSED 'cause a "rewrite" starts the whole process over again which meant that my DHO hearing would be put off at least two more weeks while I'd be stuck there in the Hole.

However... it turned out to be a blessing in disguise. When they write you a "shot" they have 24 hours to deliver it by policy or it is null & void. It just so happened that They didn't deliver my rewritten "shot" until almost 48 hours after it was written.

So it was thrown out anyway! Woo Hoo!

The Lt. said he knew it was late and would make a note if it. I still thought I'd have to wait to see the DHO (Hearing Officer), but they ended up sending me back to the unit that following Wed., the 16th

But not all was roses & candy, dear Readers, When I got the bag of clothes I had worn to the Hole, my watch & C3P0 were missing from my pockets. Plus although they gave my four property sheets to sign, there were only three bags waiting for me.

The fourth bag had all my shoes & toiletries, and possibly my radio, which is also missing.

As a result, I'm missing a lot of property which I don't have the money to replace. I don't know what I'm going to do.

That is why I went ahead and got my job back in the Kitchen. I don't have any outside support so this is the only way I can get any money into my account.

On the other hand... it's not much, For the last month I worked in here, I only made $22. For a full-time job, I only got paid $22 in one month. This is why the 13th Amendment, which allows prisoners to be treated as slaves, should be abolished.

It will take me a LONG TIME to earn the money to replace everything. That is one reason I switched from being a Line Server to working in the Dishroom. Most of the guys in the Dishroom don't have their GEDs (High School Equivalancy) and as a result are restricted on the amount they can make. Since I finished high school, that limitation doesn't apply to me. We'll see what happens.

Until next time, I wish you..