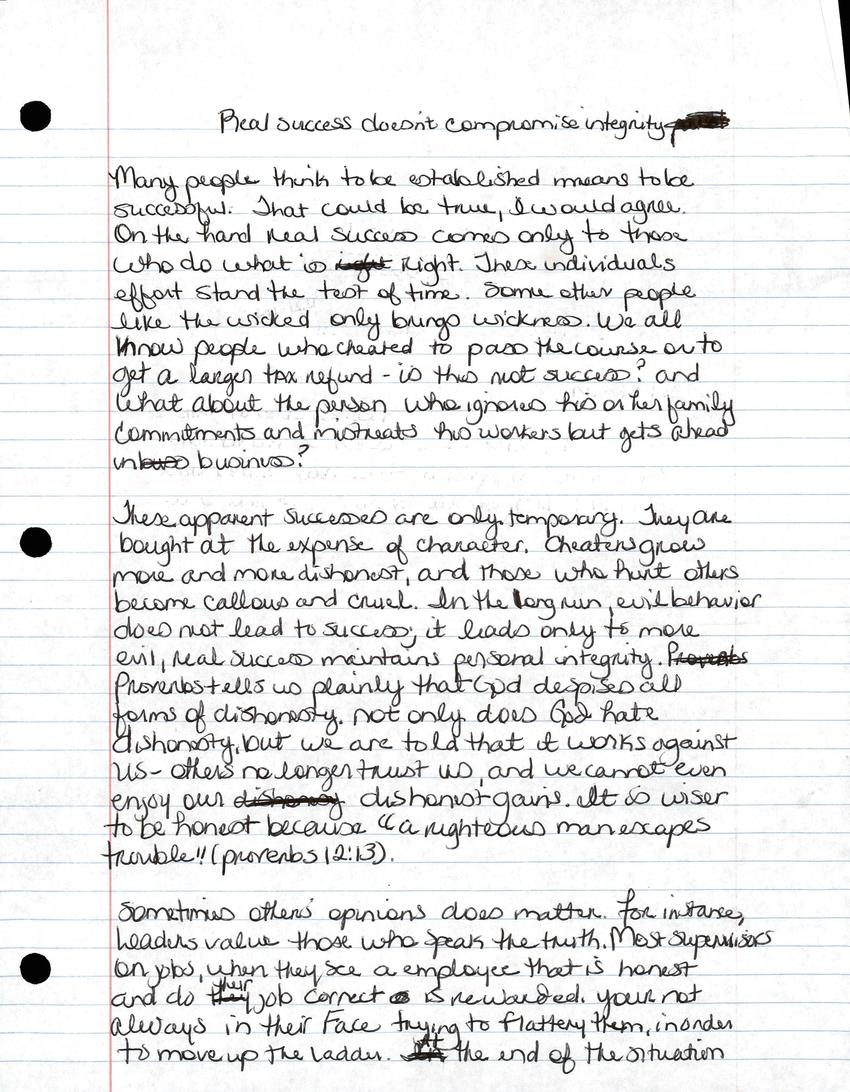 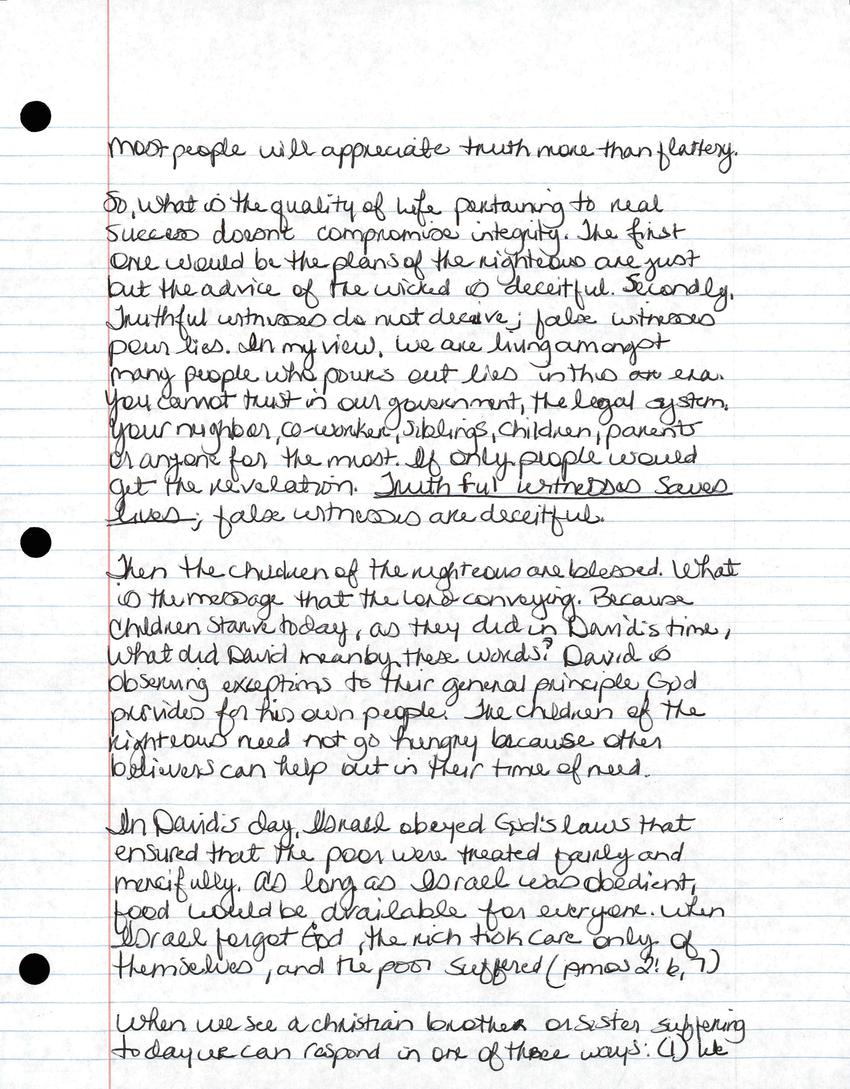 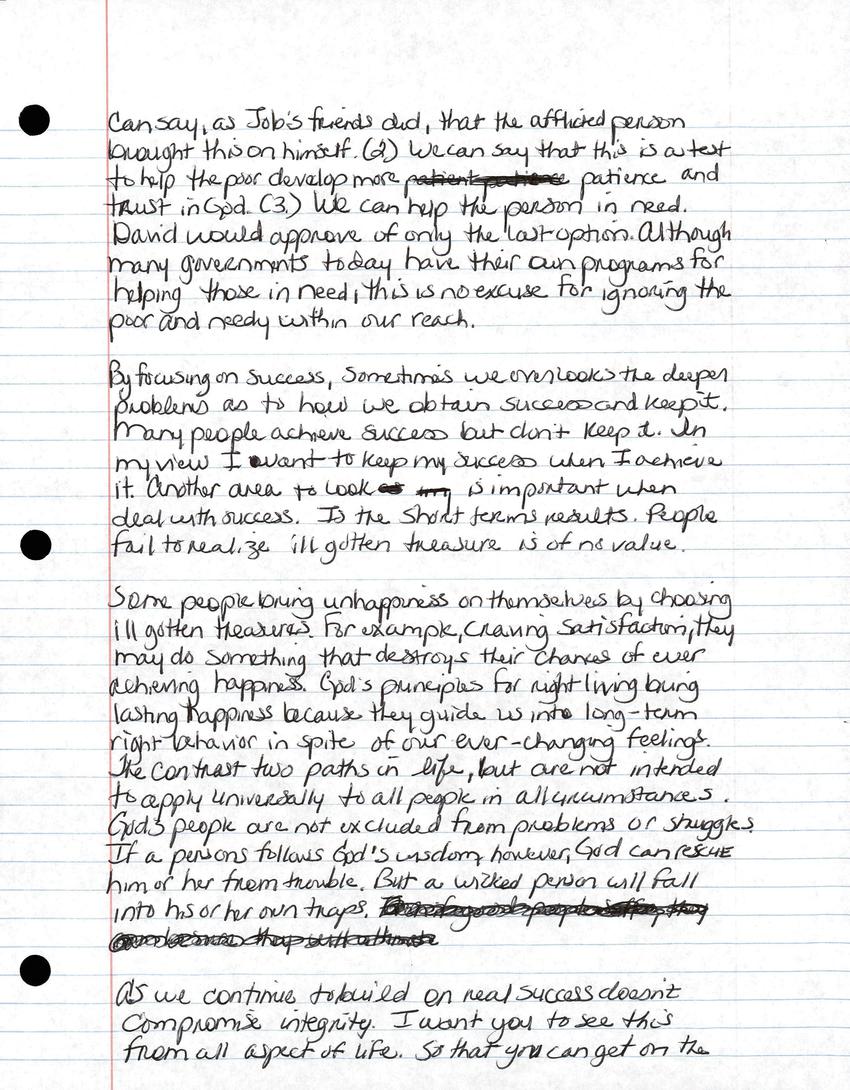 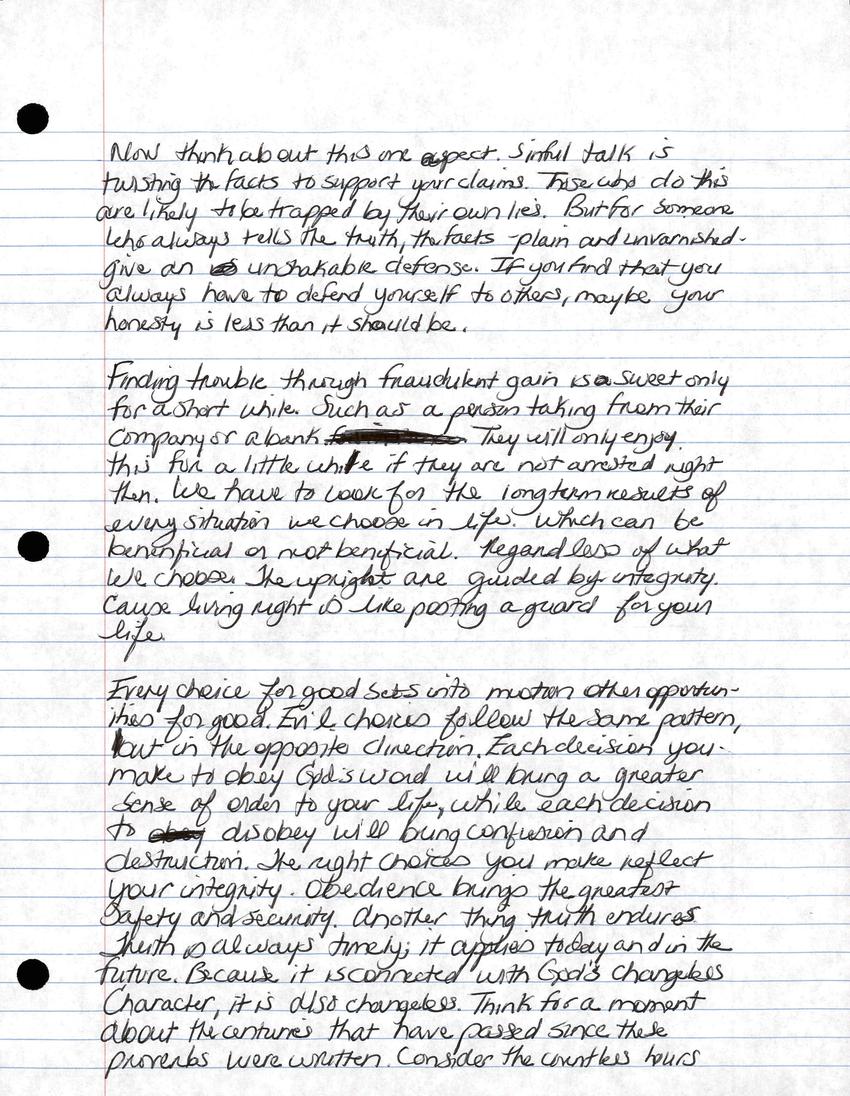 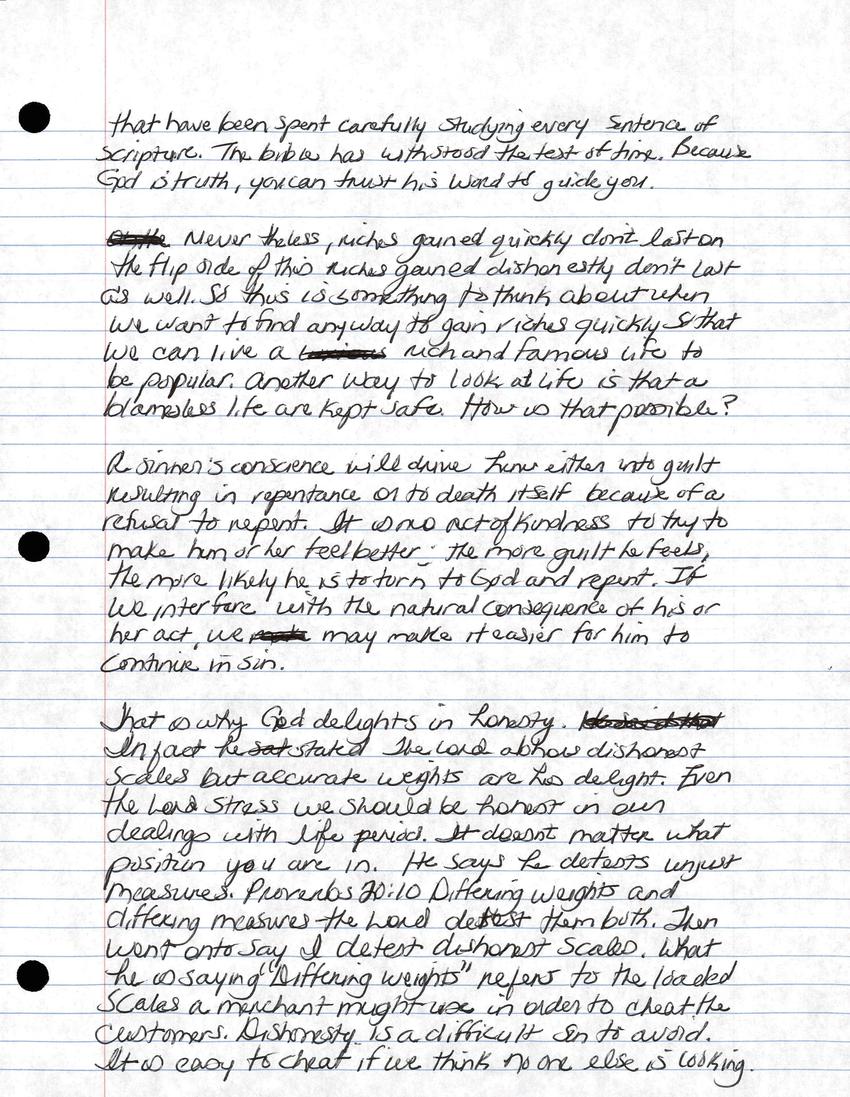 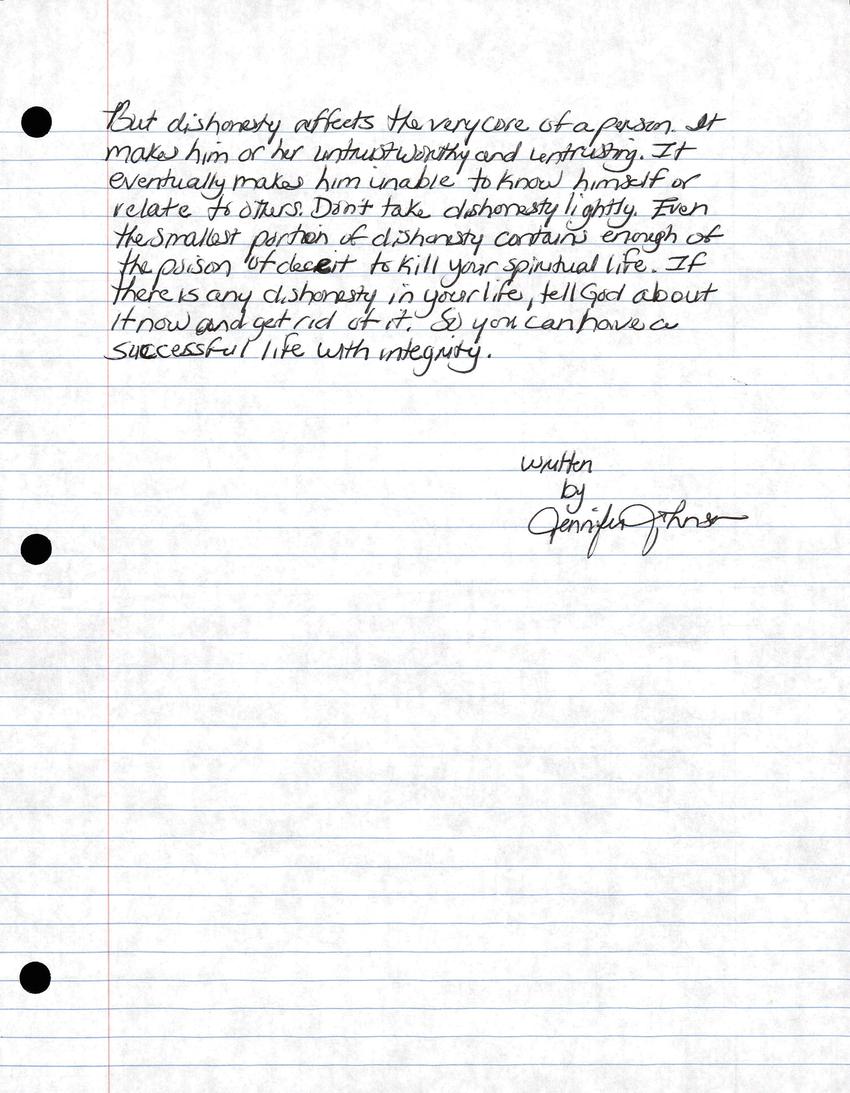 Many people think to be established means to be successful. That could be true, I would agree. On the hand real success comes only to those who do what is right. These individuals effort stand the test of time. Some other people like the wicked only brings wickness. We all know people who cheated to pass the course or to get a larger tax refund. I this not success? and what about the person who ignores his or her family commitments and mistreats his workers but get ahead business?

These apparent success are only temporary. They are bought at the expense of character. Cheaters grow more and more dishonest, and those who hurt others become callous and cruel. In the long run, evil behavior does not lead to success, it leads only move evil, real success maintains personal integrity. Proverbs tells us plainly that God despised all forms of dishonesty. Not only does God hate dishonesty. but we are told that it works against us - others no longer trust us, and we cannot even enjoy our dishonest gains. It is wiser to be honest because "a righteous man escapes trouble."(Proverbs 12:13).

Sometimes other's opinions does matter. For instance, leaders value those who speak the truth. Most supervisors on jobs, when they see a employee that is honest and do their job correct is rewarded. Your not always in their face trying to flattery them, in order to move up the ladder. The end of the situation most people will appreciate truth more than flattery. So what is the quality of life pertaining to real success doesn't compromise integrity. The first one would be the plans of the righteous are just but the advice of the wicked is deceitful. Secondly Truthful witnesses do not deceive; false witness pour lies. In my view, we are living amongst many people who pours out lies in this era
You cannot trust in our government, the legal system, your neighbor, co-worker, siblings, children, parents or anyone for the most. If only people would get the relevation. Truthful witnesses saves lives; false witnesses are deceitful.

In David's day, Israel obeyed God's laws that ensure that the poor were treated fairly and mercifully. As long as Israel was obedient, food would be available for everyone. When Israel forgot God, the rich took care only of themselves, and the poor suffered (Amos 2:6-7)

When we see a Christian brother or sister suffering today we can respond in one of three ways: (1) We can say, as Job's friends did, that the afflicted person brought this on himself. (2) We can say that this is a test to help the poor develop more patience and trust in God. (3) We can help the person in need. David would approve of only the last option. Although many governments today have their own programs for helping those in need, this is no excuse for ignoring the poor and needy within our reach.

By focusing on success, sometimes we over looks the deeper problems as to how we obtain success and keep it. Many people achieve success but don't keep it. In my view I want to keep my success when I achieve it. Another area to look is important when deal with success. Is the short term results. People fail to realize ill gotten treasure is of no value.

Some people bring unhappiness on themselves by choosing ill gotten treasures. For example, craving satisfaction, they may do somethin that destroys their chances of ever achieving happiness. God's principals for right living bring lasting happiness because they guide us into long-term right behavior in spite of our ever changing feelings, The contrast two paths in life, but are not intended to apply universally to all people in all circumstances. God's people are not excluded from problems or struggles, IF a person follows God's wisdom, howeevrl God